GMB: Richard Madeley questions use of rape as a weapon of war

John Wood, 38, from Glasgow, was caged at the Scottish High Court on Monday after being convicted of raping two women by a jury which deliberated for less than an hour. The care worker moved in with the mother after they met in Scotland and spent time chatting online.

But the woman ceased contact with Wood when she discovered he was using dating apps to meet men for sex. She allowed him to stay in her home because he had nowhere else to go.

The woman wrote in her victim impact statement: “The last time I saw John Wood… he raped me for the last time.

“In that moment he stole a piece of me that I will never get back. The previous times John raped me I never understood what it was.

“I was conditioned to think rape was only perpetuated by strangers and I naively believed that rape usually happened to drunken women on nights out and was committed by strangers. I now know differently.” 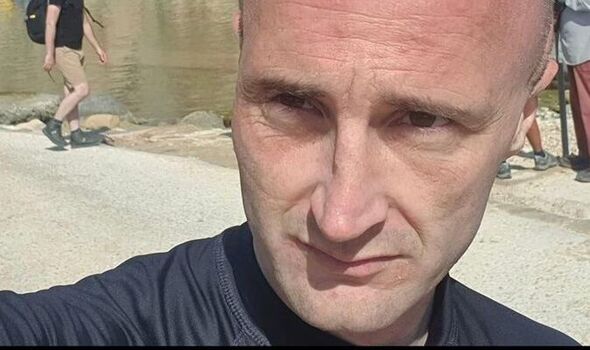 The woman said she was drifting off to sleep when Wood got in next to her and began trying to initiate something.

She wrote: “I said no, I said no. He didn’t listen. I pushed him off and tried to go back to sleep.

“He continued. I’ll never forgot the absolute fear I felt when I realised what he was going to do.”

The court heard how the woman’s children lay just feet away.

READ MORE ABOUT A DRIVER’S WARNING TO FOSSIL FUEL ACTIVISTS

Wood met the mother at a conference in Scotland (Image: Instagram)

She continued: “Most people think when someone attempts to rape you, then they would fight back. I always thought I would. I didn’t. I froze, froze in complete fear.

“I still feel that fear every day. I cannot describe that fear. It’s deep-rooted inside of me and it seems to leak into every area of my life.”

The woman reported Wood to the police after the rape, which the court heard had left her with injuries to her genitals.

Her parents moved in with her due to the attack’s impact on her mental health.

“Nowhere feels safe, not my home, not with my parents, not my work, not my bed.”

The court heard how she was diagnosed with complex Post Traumatic Stress Disorder (PTSD).

She wrote: “I felt like my whole world had shattered. I felt like I had been murdered and I was unable to leave the crime scene.”

Wood was jailed at the Scottish High Court (Image: Getty)

On how she has changed since being raped by Wood, she said: “I used to be very sociable – a happy smiley person.

“I believed in love, and I believed in a safe world. I had friends. I went out a lot. People liked me. I had a good job.

“I used to be confident. I was pretty and probably a bit of a flirt. I had male friends and enjoyed their company. I enjoyed my life and I had goals and dreams.

“I was a typical young woman in her 30s. I was happy. I am the complete opposite now. I don’t want to be touched or hugged by anyone, even my children sometimes.

“The world feels like the enemy now and I see danger everywhere.”

The woman nearly did not see justice after Merseyside Police told her twice that they were dropping the case due to an “unrealistic prospect of conviction”.

However, police in Scotland picked up her case while investigating the rape of another woman by Wood.

He was charged with one count of rape against the mum which happened during a visit to his flat in Scotland.

The other rapes she reported were included “on the docket”, meaning they were used as evidence against him in court but did not result in specific charges and were not reflected in the sentence.

Wood’s sentencing comes as a group of MPs urged the Government to show “much more ambition and focus” to tackle the “shocking collapse” in rape prosecutions.

The Commons Home Affairs Committee said the unacceptably low numbers of suspects being taken to court for rape and sexual offences will continue without stronger reforms to the criminal justice system and they will require significant funding to make an impact.

Police forces in England and Wales recorded the highest number of rapes and sexual offences in a 12-month period in the year to September.

Meanwhile, the proportion of suspects taken to court has fallen to a record low and remains the lowest for rape cases.

Committee chairman, Dame Diana Johnson, said: “The collapse in the number of prosecutions for rape and sexual offences over the last five years is truly shocking and completely unacceptable.

“While it is clear that significant effort is being put into reversing this decline across the criminal justice system, there is much further to go.

“Thousands of victims are failing to get the justice they deserve and this has to stop. We need to see much more ambition and focus.

“From now on there must be constant review and reform of every element of the system handling rape and sexual offences. There cannot be a single step back until prosecutions and convictions are far higher than they were even in 2016.”

Describing the Government’s rape review, a plan set out to address the problem, as lacking ambition, the committee said there is little confidence the target set to return to 2016 prosecution levels by 2024 will be achieved.

It urged ministers to go much further, much faster and drive change in how rape and sexual offences are handled in policing, the Crown Prosecution Service (CPS) and the courts to create a significant increase in the volume of prosecutions and convictions.

A Government spokesman said: “While the Committee acknowledges the progress we have made, we are clear that much more needs to be done.

“That’s why we’re recruiting more sexual violence advisers, rolling out pre-recorded evidence faster, improving collaboration between the police and Crown Prosecution Service and boosting funding for victim support services to a minimum £440 million over the next three years.

“The most recent data shows that there has been a modest increase in the number of charges for rape and our reforms will drive this progress further.”

Bulb fury: Urgent demands to nationalise energy provider as taxpayer forks out in bail out