RAY MASSEY: Avoid the busiest roads to make the most of your holiday

The summer getaway season got off to a terrible start for millions of Britons this week. Gridlocked roads to the ports of Dover and Folkestone saw thousands of motorists stuck in their cars.

Chaos at passport control sparked a cross-Channel blame game. And closer to home, rail strikes brought public transport to a near standstill. Which is why many have been tempted this summer simply to stay here and enjoy the delights of motoring at home.

And why not? There’s plenty to see and enjoy on our doorsteps. And once out of urban centres and away from motorways, most country highways and B-roads are a delightfully empty oasis of calm. 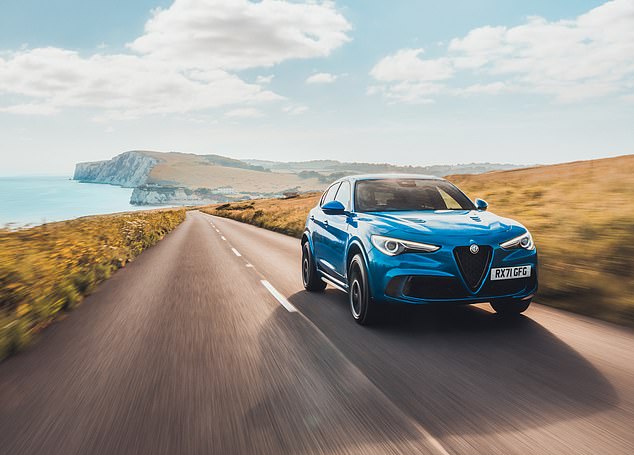 World-class roads: An Alfa Romeo Stelvio on a scenic drive

This summer could hark back to a bygone era of motoring of which, as a child, I caught a last lingering glimpse.

Looking through the windscreen while sitting (unrestrained — there were no seat-belts then) on the red leather and horsehair front seat of our curvaceous grey family Austin Cambridge was a delight.

Tucked away in my bookshelves I also have a well-used copy of a classic Daily Mail Motoring Map — something that was immensely popular in the 1920s, 1930s and up to the 1950s when driving was a pleasure, not an endurance.

Then there were the wonderful 160-page Daily Mail Guides, edited in the 1950s by one of my predecessors, the splendidly-named and attired Courtney Edwards. The price of the guide rose from just two shillings (10p today but the equivalent of just over £3 then) in 1952 to 2/6 or half a crown (12.5p) by 1956.

But many of the roads highlighted are just as delightful in 2022. You just have to find them and use them.

Here’s a tip. Head off into the countryside. Anywhere. Then just take a turning on a whim and see where it leads.

Stop where something takes your fancy. You’ll be amazed.

And don’t forget to pack a picnic.

Nor do you have to venture abroad to emulate some of the world’s finest driving roads.

In partnership with the Alfa Romeo Owners’ Club, Alfa Romeo UK has compiled a list of the Top 10 driving roads in the world — and then found the nearest UK ­’doppelganger’. And to prove it, they took an Alfa Romeo Stelvio Quadrifoglio to try the top three out.

The Stelvio Pass in Italy’s Tyrolean Alps, famed for its dramatic scenery and hairpin bends, was voted the road most motorists would like to drive.

But that is matched by ­Scotland’s Applecross Pass in Strathcarron which has a similarly dramatic setting — deep in the Scottish Highlands — with the narrow and twisty road running up to an elevation of 600m. Italy’s Amalfi Coast is the second-ranked driving route. But you could try instead its UK ‘twin’ — the Roseland Peninsula in Cornwall.

Experts noted: ‘Part of Cornwall’s Area of Outstanding Natural Beauty, arriving at the bay and exploring its seaside towns on a summer’s day will evoke the idyllic Italian location’.

Further afield in third place is Australia’s Great Ocean Road, and Alfa’s experts said: ‘Despite being thousands of miles apart, the tranquil Military Road that runs along the south-west side of the Isle of Wight bears a strong resemblance. 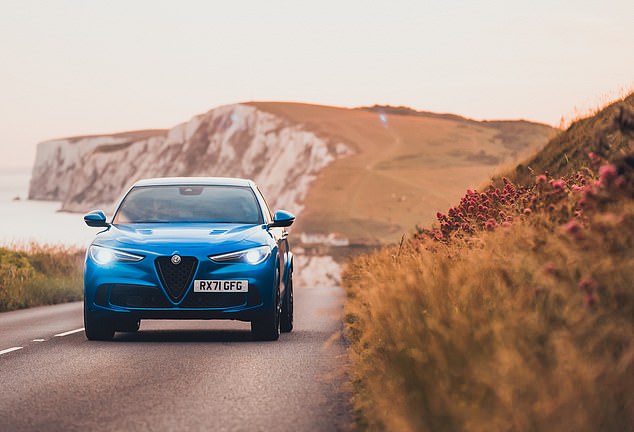 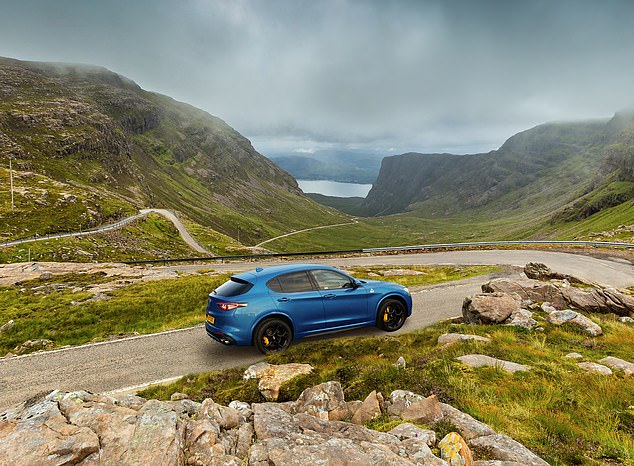 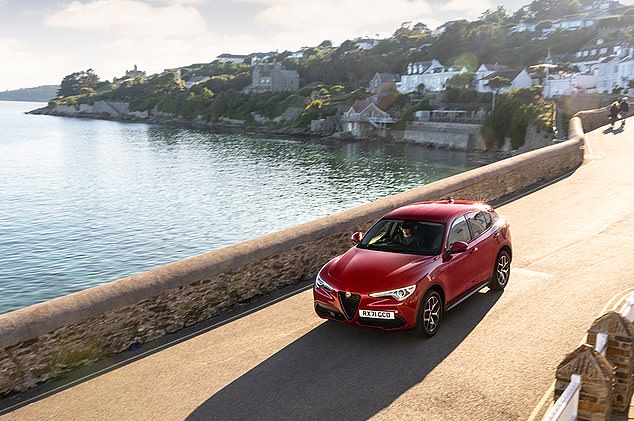 Motoring groups such as the AA (theaa.com) and RAC (rac.co.uk) also offer suggested routes and trips, as well as tips.

AA president Edmund King says the AA route planner and a car’s own sat-nav can be set to avoid motorways: ‘You really can enjoy the British summer taking the less-travelled highways and byways.’

One of the most beautiful spots in the UK is my own native Northumberland. I have mixed feelings about revealing this as it’s long been a best-kept secret among Northumbrians desperate, now that the Vikings have stopped raiding, to keep the endless and near-empty sandy beaches free to enjoy for themselves.

Just head north from ­Newcastle to spots like Amble, Alnwick Castle (now of Harry Potter fame) and gardens, Bamburgh Castle, Holy Island Lindisfarne, and beyond to the border town of Berwick-upon-Tweed.

Inland, follow the Roman Wall to the delights of Corbridge and Hexham, or head north to Kielder Water and Forest, and up to ­Rothbury to visit Cragside, the first home in the world to be lit by hydro-electric power. More details at visit northumberland.com.

Then there are driving day packages such as those with Great Driving Days (great drivingdays.co.uk), offering hour-long taster sessions from £49, up to road trips and day hire and trails from £199, using classic and modern classic cars of the 1960s, 70s, 80s and 90s.

There are plenty of motoring events going on, too.

They include: the ticket-only Hagerty Festival Of The Unexceptional (hagerty.co.uk) at Grimsthorpe Castle in Lincolnshire tomorrow; various events at Bicester Heritage (bicesterheritage.co.uk); the British Motor Show (the britishmotorshow.live) which runs for four days from August 18 to 21 at Farnborough International in Surrey; CarFest South (carfest.org) at Laverstoke Park Farm in Hampshire from August 26 to 28; Salon Privé (salonprivecon cours.com) at Blenheim Palace, Oxfordshire, from August 31 to Sunday, September 4 (Classic & Supercar); Concours of Elegance, Hampton Court Palace, September 2-4 (concoursofelegance.co.uk); Coventry MotoFest (coven trymotofest.com) over the weekend of September 10 and 11; and the Goodwood Revival from Friday 16 to Sunday 18 September (goodwood. com/motorsport).

Skoda has got into the summer road-trip spirit showcasing its Enyaq iV 80 FestEVal — a tooled-up electric estate with space to sleep up to four people. The boot has been fitted with a pull-out camping box by Egoe, which includes a gas cooker, sink and double bed that extends into the cabin, as well as a roof tent.

It has a range of up to 338 miles between charges, wifi connection for up to eight devices and an eight-speaker sound system.

The AA also offers tips for motoring at home to reduce risk of a breakdown:

MINI goes all electric — and minimalist

Britain’s MINI is launching its first electric crossover. But it will be built initially in China.

The silent, zero-emissions MINI — expected to perform like ‘an electrified go-kart’ — will be the first to get a unique sound to mark it out from other brands and to warn pedestrians of its imminent arrival.

MINI design chiefs have been working closely with British fashion guru and MINI fan Sir Paul Smith to produce new models that will be more minimalist — but with flare and a twist to appeal to younger buyers. 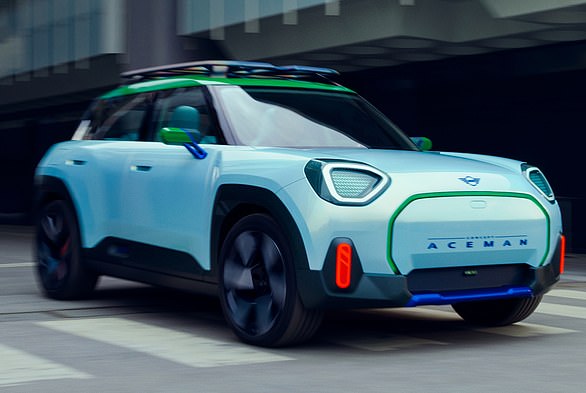 They say the spare design is in line with the philosophy of the creator in 1959 of the original and much smaller Mini, Sir Alec Issigonis. Riding on 20-inch wheels, the new MINI Aceman is set to go into production from 2024.

MINI and German parent company BMW also sought to allay any fears over the company’s Oxford plant in the UK by insisting that its future is secure, with new cars planned to be built there.

They declined to state publicly whether the new MINI Aceman will be part of that future line-up in the UK. However, the mood music suggests that it is likely that it will be.

The existing electric 3-door hatch is currently built alongside other MINI models such as the petrol and diesel 3-door hatch, the 5-door hatch and the MINI Clubman, at Oxford, which employs around 4,000 people

MINI said that the new Aceman crossover marks ‘the dawn of a new MINI design era’.

The distinctive roof-rack also echoes the UK’s Union Flag design — ‘acknowledging the brand’s British roots’ — as do the rear lights. And when the vehicle is unlocked, the matrix LED lights on the grille display a Union Flag graphic.

Share
Facebook
Twitter
Pinterest
WhatsApp
Previous articleXi issues horror warning to Biden about 'playing with fire' ahead of Pelosi Taiwan trip
Next article'You stabbed him in the back!' Yorkshireman praised as he slams Rishi for abandoning Boris
RELATED ARTICLES
Business