Should you feel the urge to harness your inner Max Verstappen, then the hi-tech arm of F1 racing group Red Bull has just the thing – announcing plans today for a scintillating new 200mph British-built two-seat hypercar aimed at super-rich owners.

With prices for the RB17 starting from a cool £6million (£5million plus VAT), you can now buy one of a limited run of just 50 of Red Bull’s first-ever cars created purely for civilians rather than professional F1 racing-drivers.

However, the hypercar will be exclusively for track use only, with the vehicles not being road legal.

The four-time constructor and five-time driver world champions haven’t yet released images of what the high-performance model will look like but has confirmed that the venture is creating more than 100 new jobs at the company’s Red Bull Technology Campus in Milton Keynes. 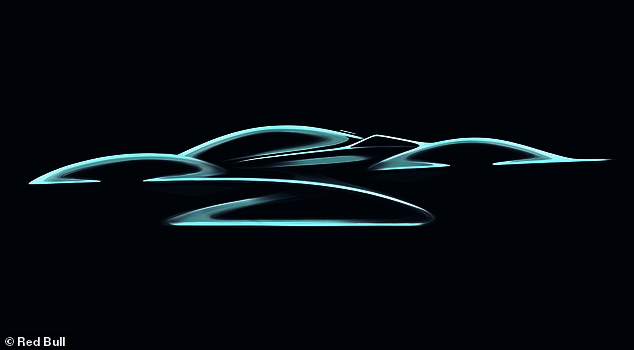 Red Bull goes from the track to the road…almost: This teaser image is all we have to see of the new £6million Red Bull hypercar announced today – but we do know it won’t be road legal

Deliveries to deep-pocketed customers are expected to begin in 2025.

But they will be for track use only as they will not be road-legal – unless owners pay to have their cars individually homologated for road use.

Powered by a mighty V8 hybrid engine designed to deliver more than 1,100bhp,  the new Red Bull RB17 it is expected to accelerate from rest to 60mph in around 3 seconds and to a top speed in excess of 200mph.

Driver and passenger are protected inside a super-light but super-strong carbon-fibre cockpit tub.

The 2021 World Champion, Max Verstappen, is widely expected to be the test driver for the car.

The Red Bull team already has some experience developing hypercars, having played a pivotal role in creating the £3.5million Aston Martin Valkyrie, which was originally codenamed AM-RB 001 to signal the collaboration with the iconic British luxury car manufacturer.

The F1 team’s designer, Adrian Newey, played a key role in creating the high-performance Aston, and it will be his expertise that will drive the development of Red Bull’s own hypercar.

The move will also see Red Bull taking its rivalries from the track to the customer, namely the Mercedes-AMG One, which costs £2.4million and is powered by an F1-derived hybrid powerplant – and not to mention going up against Ferrari’s plethora of supercars. 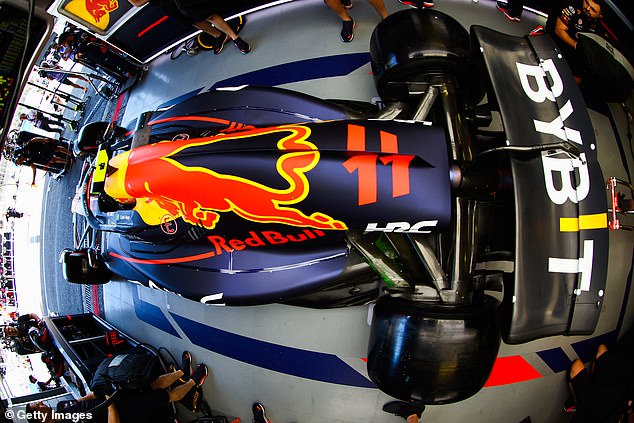 With prices starting from a cool £6m (£5m plus VAT), you can now order one of a limited run of just 50 of Red Bull’s first-ever cars created purely for civilians rather than professional F1 racing-drivers 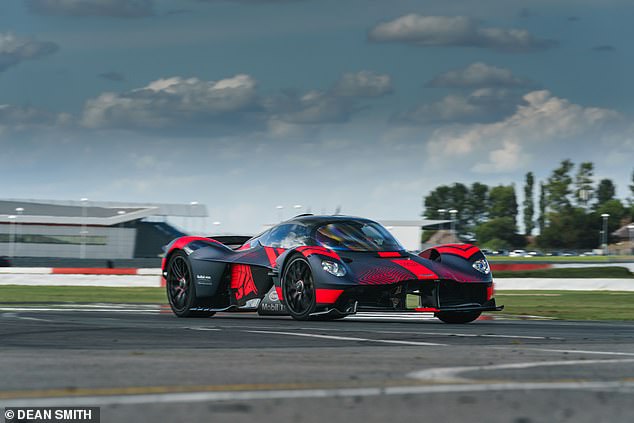 The Red Bull team already has some experience developing hypercars, having played a pivotal role in creating the Aston Martin Valkyrie, which was originally codenamed AM-RB 001 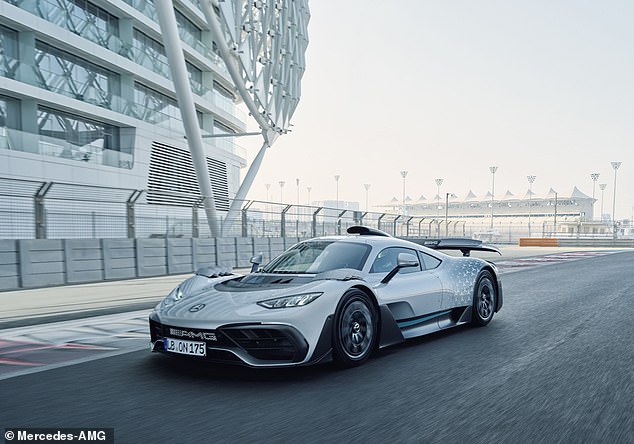 The move will also see Red Bull taking its rivalries from the track to the customer, namely the Mercedes-AMG One hypercar, which costs over £2m and is powered by an F1-derived hybrid powerplant

Announced in the run-up to this Sunday’s British Grand Prix at Silverstone, the RB17’s sophisticated aerodynamic styling and ground-effect package is designed to keep the hypercar glued to the ground as it hits speeds that would otherwise cause it to take to the air like a fighter jet.

Pre-order books opened today ahead of production starting in 2025.

However, there is no car to see yet, save a teaser outline graphic representation.

The real two-seat hypercar is being designed, developed and manufactured entirely in-house by Red Bull Advanced Technologies, the high-performance engineering arm of Red Bull Racing Group, and is their first ever production car. 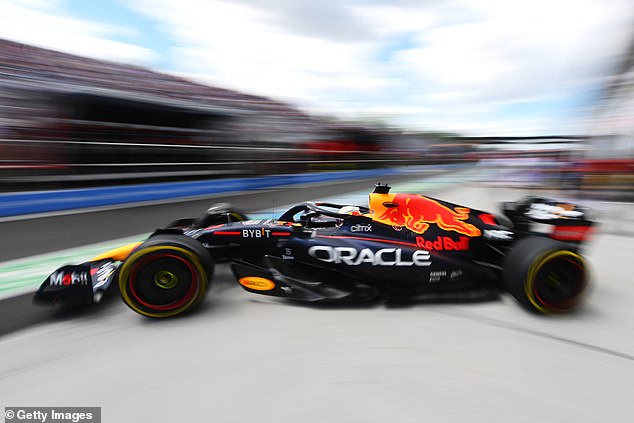 Bosses said it marked ‘a milestone’ in the evolution of the company.

High nett worth owners collectors won’t just get the car, they will also have access to expert back-up in the form of simulators, vehicle program development and on-track training and experiences supported directly by the factory, with servicing and maintenance support tailored to each owner and how they use the their new supercar.

The company said: ‘The RB17 takes its inspiration – and name – from the cars that Red Bull Racing has campaigned in the world’s most demanding and technically advanced motorsport series.

‘Designed around a carbon-composite tub, the RB17 features the most advanced ground effect package available in a series production car. ‘

The RB17 is the brainchild of Adrian Newey, chief technical officer of Oracle Red Bull Racing and Red Bull Advanced Technologies who described it as ‘a two-seat hypercar optimized for the ultimate on-track driving experience’.

Mr Newey noted: ‘The RB17 distils everything we know about creating championship-winning Formula One cars into a package that delivers extreme levels of performance in a two-seat track car.

‘Driven by our passion for performance at every level, the RB17 pushes design and technical boundaries far beyond what has been previously available to enthusiasts and collectors.’ 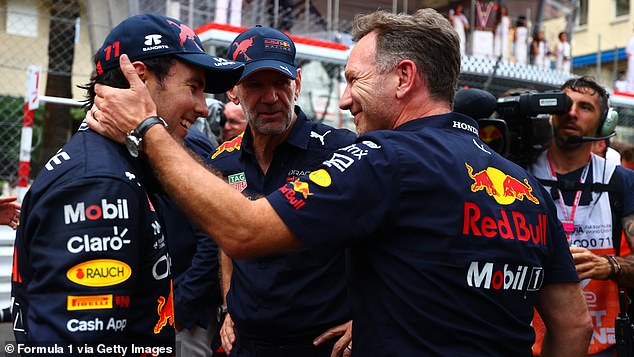 ‘Further, the RB17 marks the first time that a car wearing the Red Bull brand has been available to collectors.’

Announcing the new hypercar, Red Bull Advanced Technologies said: ‘Pricing starts at £5million (plus applicable local taxes) with just 50 collectors set to become owners of the RB17. That ownership includes more than the car, bringing a close association with the Red Bull Racing team through access to simulators, vehicle program development and on-track training and experiences.

‘The RB17 will be supported directly by the factory, with servicing and maintenance support tailored to each owner and their usage profile for the car.’

Since its foundation in 2005, Red Bull Racing has progressively expanded its operations which are now spread across a 290-acre campus in Milton Keynes.

The Red Bull Advanced Technologies arm was created in 2014.

The firm said: ‘It brings its exceptional engineering, design, technology, simulation, and production capabilities to a hugely diverse set of industries.

‘The creation of the RB17 will both secure existing jobs and create over 100 new positions in Milton Keynes, in addition to the economic benefits across project partners and suppliers.’

As pre-order books opened, expressions of interest in the RB17 can be made from today at [email protected]