Sunday night’s live final will see three celebrities compete for the Dancing On Ice trophy, after Connor Ball and Kye Whyte were voted out in a double elimination.

And now that it’s a three horse race, Regan Gascoigne, 26, is at 2-5 odds on favourite to win the ITV reality show.

He prepares to go head-to-head with Brendan Cole who is the second favourite at 3-1, while Kimberly Wyatt is priced as the 6-1 outsider of the final three. 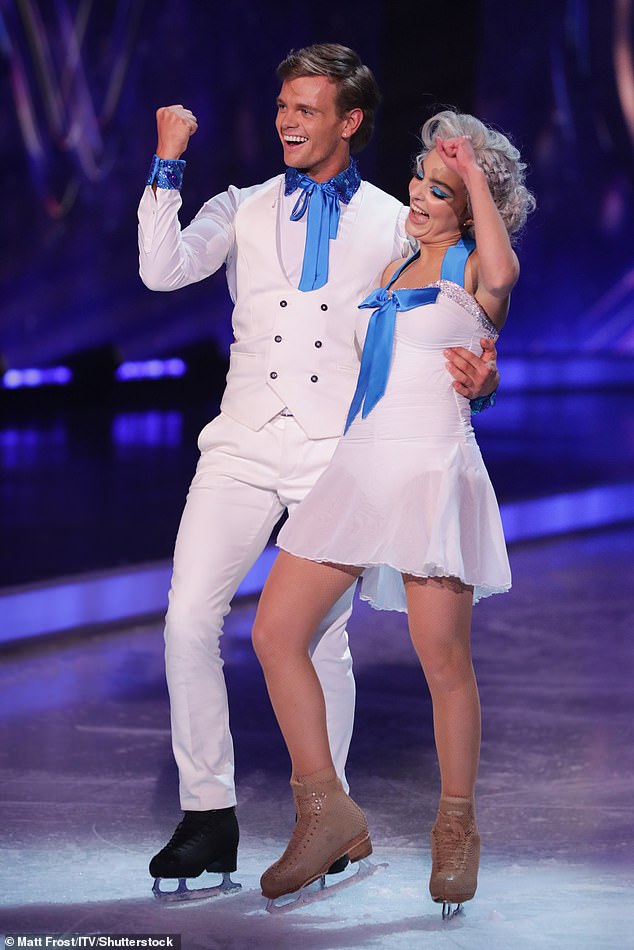 Hooray! Regan Gascoigne is odds on favourite to WIN Dancing On Ice during Sunday’s finale (pictured in March 2022 with his dance partner Karina Manta)

Leading bookmaker Coral has predicted: ‘Regan has been our favourite for a very long time now and it would be a big shock if he didn’t go on to be crowned winner of the 2022 series of Dancing On Ice. He’s odds on to get his hands on the trophy.’

PR executive Harry Aitkenhead continued of the son of former England footballer Paul Gascoigne: ‘If there is to be an upset, Brendan is the most likely to cause it according to our betting whilst Kimberly is the rank outsider of the final three.’

Brendan recently revealed it was ‘tiring’ that Strictly Come Dancing ‘pushed the same narrative for 15 series’ that he was the ‘competitive one’ on the show.

The performer, 45, told MailOnline that he was only able to show ‘one side of him’ when he was a pro on the BBC programme. 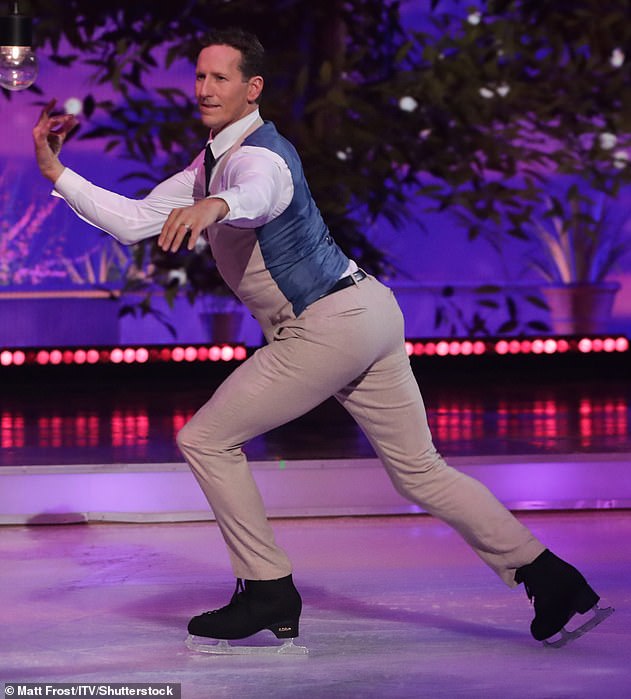 Competing: He prepares to go head-to-head with Brendan Cole who is the second favourite at 3-1 (pictured in March 2022) 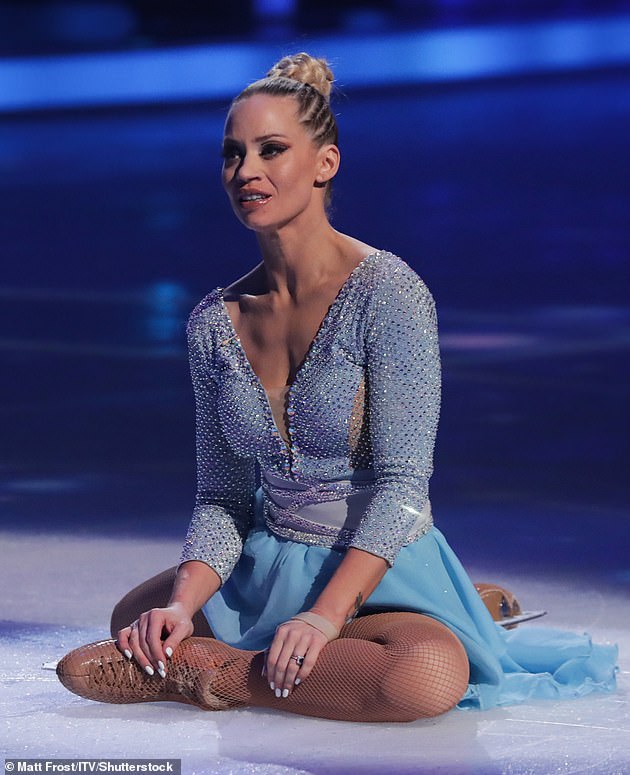 Tragic: Kimberly Wyatt is priced as the 6-1 outsider of the final three (pictured in March 2022)

He then lauded ITV’s DOI for ‘showing him in a lovely light’, including more of his fun personality and that he likes to ‘muck around’ with other contestants.

Brendan – who has come under fire this series for being a professional dancer but says it’s only because ‘people like to complain’ – will go up against Pussycat Doll Kimberly and Regan in the upcoming final – who also both have dance experience.

Speaking to MailOnline alongside the two other finalists, Brendan said of his time on Strictly: ‘I came on the show (Dancing On Ice) hoping to show another side to me. Strictly only wanted to show one side to me.

‘And they really pushed that side of me. There was very much a narrative that the show went with for 15 series. And it was tiring because it was actually not me.

‘As you can see I like a bit of fun. I muck around a lot and that wasn’t shown very often and I think it has been shown more on this show. 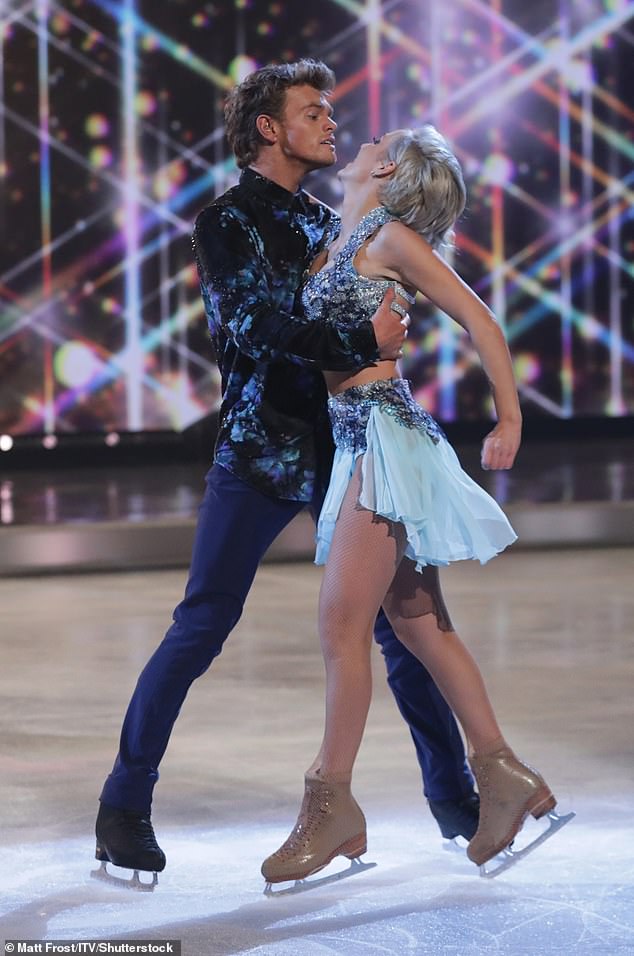 Fingers crossed! Bookmaker Coral has predicted: ‘Regan has been our favourite for a very long time now and it would be a big shock if he didn’t go on to be crowned winner of the 2022 series of Dancing on Ice. He’s odds on to get his hands on the trophy’ (pictured in March 2022)

‘And I am very pleased for the way it has been for all of, we have been shown in really lovely lights which we are. And it has been a really great experience.’

New Zealand-born Brendan began as a dancer with the original Strictly cast in 2003. He was the first-ever professional to win the Glitterball trophy with Natasha Kaplinsky and was there for 15 years afterwards.

He continued: ‘I hope the show has given me the chance to show a new side of me. I am not actually fiercely competitive I am competitive with myself.

‘If I get something wrong or I am not where I’m meant to be I get immensely p***ed off with myself. I am only competitive with myself, if I lose or win it doesn’t matter, but it is always nice to win!’

During the chat Brendan – who is partnered with pro Vanessa Bauer – also touched on the criticism he has faced for being a professional dancer and going on DOI. 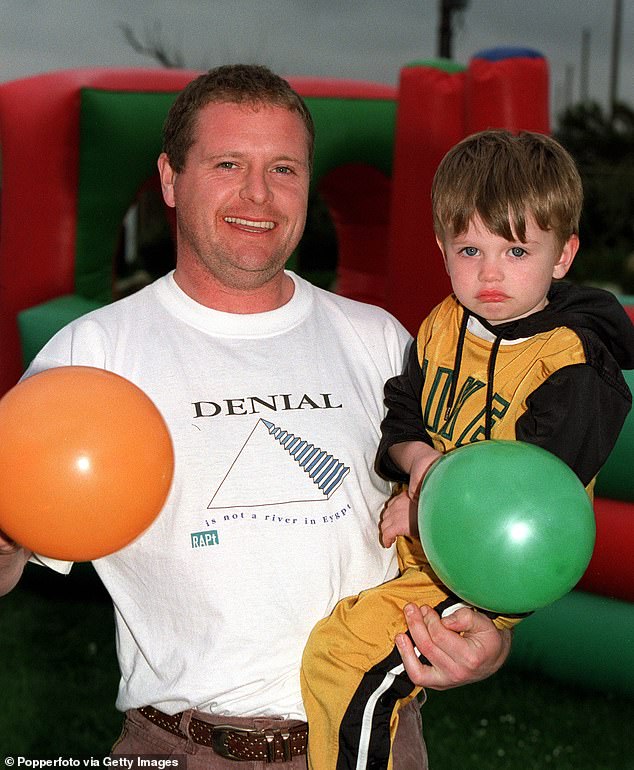 Throwback: The professional dancer is the son of former England footballer Paul Gascoigne (pictured in 1999)

He explained: ‘I think the fact that we have got a dancing background has only improved things on the ice.

‘The stuff we have been able to do because of our background has been really special. I have loved the challenge of it. People are always going to complain. That is the nature of how humans exist today. We will never change their minds.’

Sunday’s final comes amid rising Covid cases in the UK again and there are hopes among the last three contestants that thing run smoothly this weekend.

However Brendan says he is carrying on as normal, joking: ‘What’s Covid? No we are carrying on life as normal. You don’t step out the door thinking you are going to get hit by a bus.

‘You get on with your day and hope for the best. We have worked hard to get here and I am just carrying on as normal and hopefully we will all be well and able on Sunday.’

Also chatting with MailOnline was Kimberly, 40, who says that now more than ever it is important that they put on an incredible show on Sunday.

She said: ‘The world needs an epic final. There is so much going on in the world. We are performers and we need to help people escape their worries in the day. And we have the skills between the three of us to put on a really amazing show.’

The beauty also sweetly revealed that her family have been supporting her along the journey and how it has inspired her three children to want to dance. 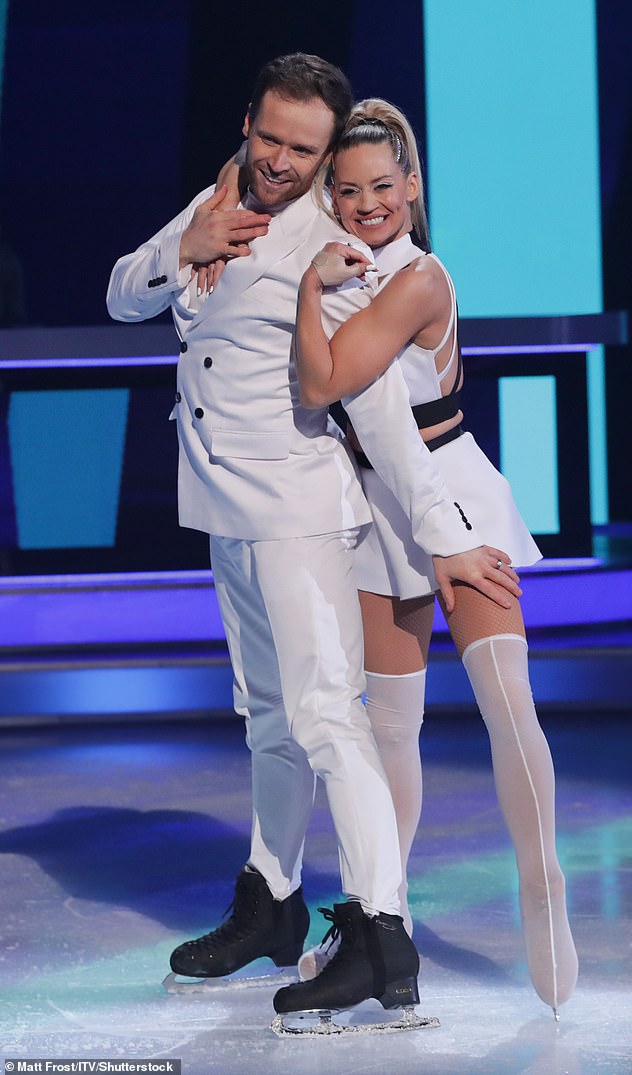 Ready to go:  Kimberly recently told MailOnline that now more than ever it is important that they put on an incredible show on Sunday (pictured with pro Mark Hanretty)

She said: ‘It’s been so nice to take the kids on the journey with us, they see how hard we work and rehearsals. It has really inspired them.

‘My middle child Maple goes to sleep at night saying ‘I want to be the best dancer in the family’. I will be doing many school runs to make up for not being around as much due to training.’

Brendan then added of his loved ones: ‘It’s something our families have very much shared with us. That’s an amazing thing. My four-year-old will be there on Sunday which I am nervous about. But them being there is the most important thing.’ 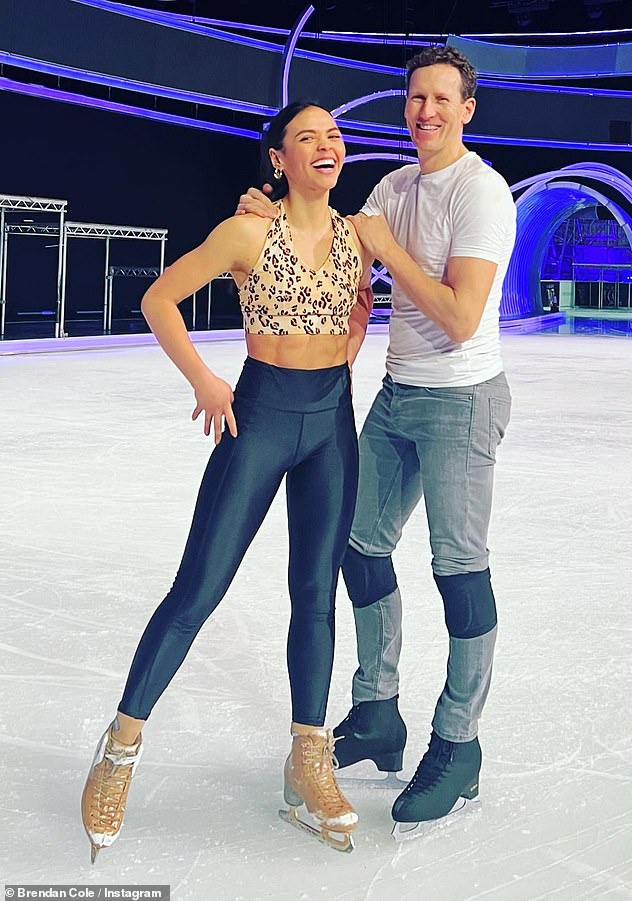 Upcoming: Brendan added of the upcoming final: ‘There is definitely an excitement that will build to nerves!’

He added of the upcoming final: ‘There is definitely an excitement that will build to nerves. The semi final was hard for me, but now we are here, we have done it now and whatever happens happens.

‘We are all pushing each other, there is an amazing feeling of comradery which was quite hard to gain at the start as we were quite separate but now we have hung out a bit more it’s nice.

‘We have that energy to push each other to do better and try things we wouldn’t have normally tried. It’s been an amazing thing.’

Brendan continued: ‘This is a once in a lifetime experience, we have all been doing nothing for two years. Kimberly was about to go on a world tour for goodness sake and then lockdown.

We have all been wanting to get out there and be on the stage and perform. And all of a sudden we are given that opportunity and it’s been the most incredible six months’.

Skating legends Jane Torvill and Christopher Dean kick off the show with a unique version of Bolero, accompanied by acclaimed violinist David Garrett.

Then the remaining three stars take to the ice to battle it out for the crown, performing their favourite routine from the series as well as taking part in a last showcase.

The Dancing On Ice final will air on ITV at 7.30pm on Sunday. 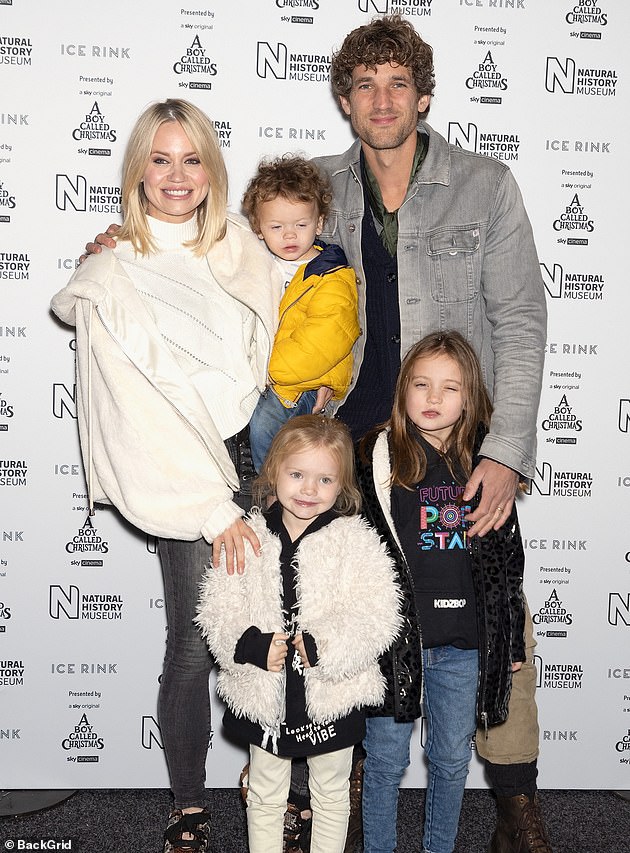 Aww: The beauty also sweetly revealed that her family have been supporting her along the journey and how it has inspired her three children to want to dance (pictured with daughters Willow, seven (right) and Maple, four (left) and son Ford Senna, two (centre left)