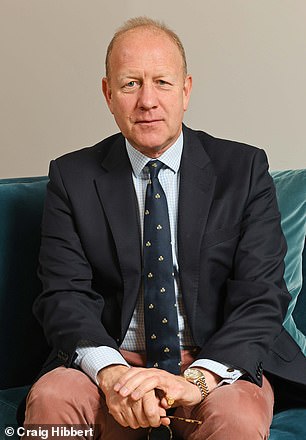 Insurer LV faces a fresh revolt after it refused to rule out another bonus for its disgraced boss.

The mutual organisation, which is trying to repair relations with members after a torrid nine months, this week revealed that boss Mark Hartigan was finally on his way out.

The former Army colonel lost the confidence of thousands of LV customers following his push for a deal with private equity. The customers ultimately voted down the controversial sale.

Now LV has declined to rule out handing him another bonus for the current financial year.

LV’s policyholders are threatening to rebel at the firm’s annual meeting, when they will be asked to approve last year’s pay report.

One LV member, 75-year-old Donald Hare, said of Hartigan: ‘He’s got a cheek. I would vote against him getting that amount [of pay]. I think he’s ripped all the members off. He’s taking us all for a ride.’

Hartigan’s previous bonus was awarded in a year which saw LV spend more than £30million of members’ money on the attempt to sell itself to private equity firm Bain Capital last year.

He resigned in the face of a no-confidence vote after more than 1,000 LV members wrote to The Mail on Sunday and our sister paper the Daily Mail saying they no longer supported him. Hartigan plans to stay on in the post until a successor is found. An LV spokesman said he would continue to be paid in full.

Clarissa Johnson, a retired lecturer, said: ‘I’m not happy about the way bonuses have been paid.’

She added that it was ‘disappointing’ that LV would not disclose whether it would offer Hartigan another reward for this year.

Johnson added: ‘We still haven’t had any explanation for what happened which marries up with what we have learned about the deal. I don’t feel the whole thing is over yet.’ The 179-year-old firm – founded as Liverpool Victoria to help the city’s poor pay for a decent burial – has long prided itself on being a mutual. But LV’s 1.2million members were urged by Hartigan and then-chairman Alan Cook to approve a takeover by Bain.

This would have meant LV losing its treasured mutual status, so it would no longer be owned by its customers and would instead be run for the benefit of a profit-hungry investor.

Hartigan and Cook claimed LV desperately needed cash to modernise. They claimed that Bain was the only buyer willing to put up the money.

But then it emerged that Hartigan could receive a hefty financial windfall and potentially a stake in the company.

It was later discovered that Royal London, a fellow mutual, had made a similar offer for LV and had even offered to keep the firm’s member-owned structure, but it was turned away.

Eventually LV’s customers voted the Bain deal down in December. The business, now overseen by new chairman Simon Moore, has not yet revealed when it will hold this year’s annual meeting, but it is expected in the autumn.

The vote on the remuneration report will not be binding – so Hartigan cannot be forced to give the cash back.

Hare added: ‘It’s a mutual. Surely if the majority of members vote against the pay then the directors should not be giving it out.’