Richard Gere went from recognizable actor to among the top A-list leading men in Hollywood following his performance in American Gigolo (1980).

And while he went on to star in a number of acclaimed films over the the years, including An Officer And A Gentleman, Pretty Woman and Chicago, in more recent years the leading man has seemingly been more focused on his relatively new family.

Married now for just over four years, and with two young sons, Gere and wife Alejandra Silva are currently enjoying a holiday in the sun in Ibiza, Spain. 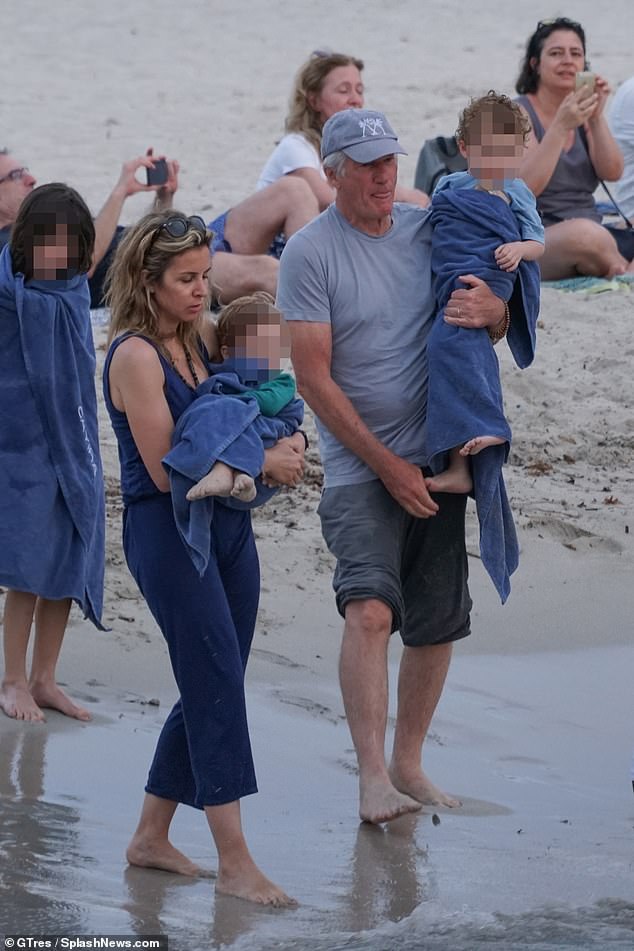 Holiday in the sun: Richard Gere, 72, and wife Alejandra Silva, 39, are currently on holiday in Ibiza, Spain with their two young sons

The couple were spotted with their boys as they relaxed on the beach and, at times frolicked in the gorgeous waters of the Mediterranean Sea.

For their day of fun in the sun, Gere, 72, opted to wear gray sweatpants, which he rolled up a few inches to just above his knees and a gray t-shirt.

Considering all the trips he made into the water, trying to entice their boys to go in the water, he spent most of the day in his bare feet.

And with the sun glaring down and temperatures hovering around the mid-80s Fahrenheit for a high, the Philadelphia, Pennsylvania native wore a gray baseball cap over his short gray locks. 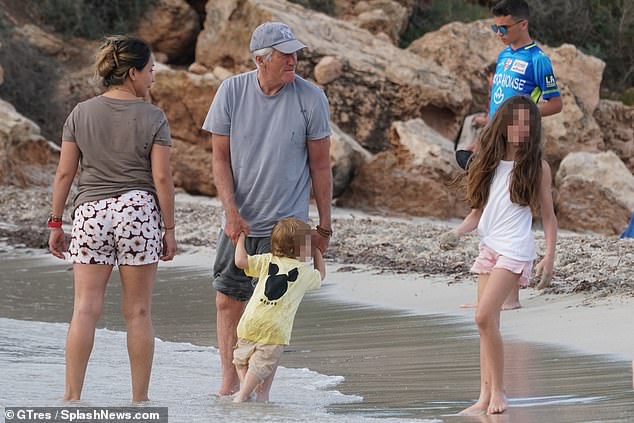 Coolin’ off: The former Hollywood A-lister made his way into the water with one of his sons 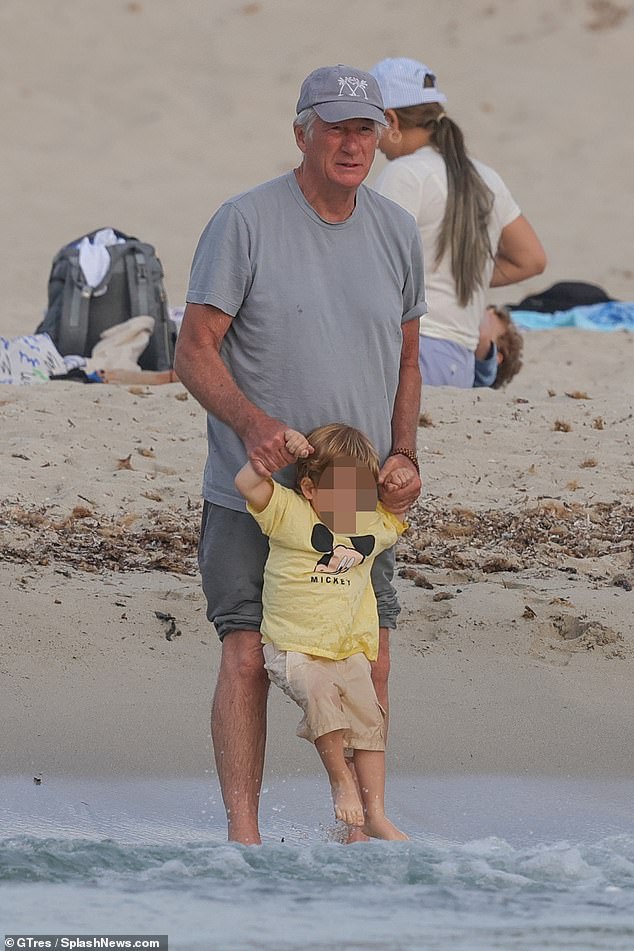 Family matters: The American Gigolo star and his wife are the proud parents of  a three-year-old son and a two-year-old son 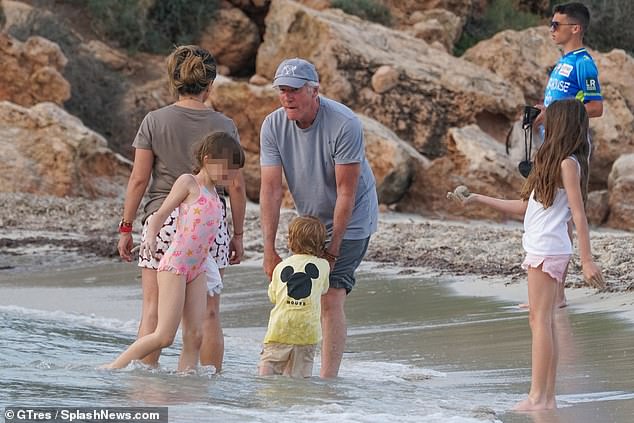 Playful: The couple, who have been married for just over four years, got playful with their kids and other who joined in on their fun

Silva, 39, who’s a native of Spain, covered up a bit in dark blue sweatpants with a matching tank top.

With her long dirty-blonde locks pulled back off her face with a pair of sunglasses on the top of her head, the publicist and activist only went into the water up to her ankles.

She and her husband appeared to each take turns looking after one of the boys as they went from lounging on the sand, with a female companion, possibly a family member or nanny, to taking the short walk into the sea.

They never appeared to go full under the water for a swim, opting instead to stay close to the shoreline. 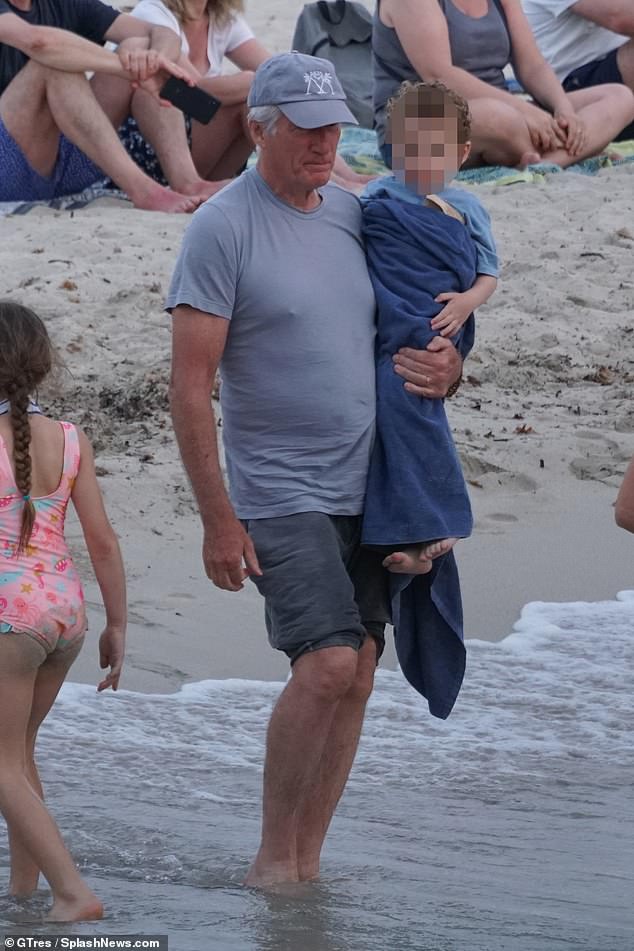 Easy does it: The Pretty Woman actor only appeared to go into the water up to his ankles 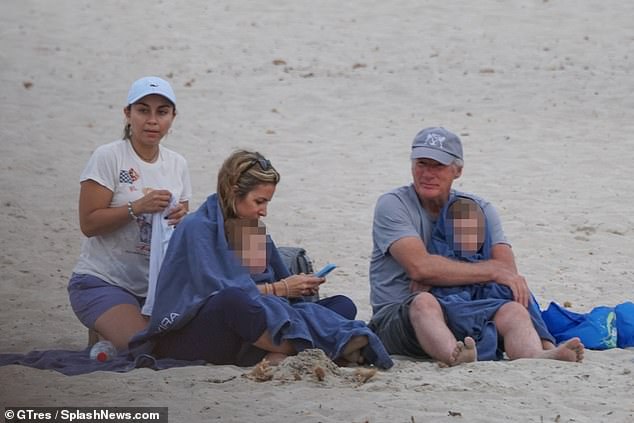 Relaxing: Eventually, the family decided to relax on the beach with a friend 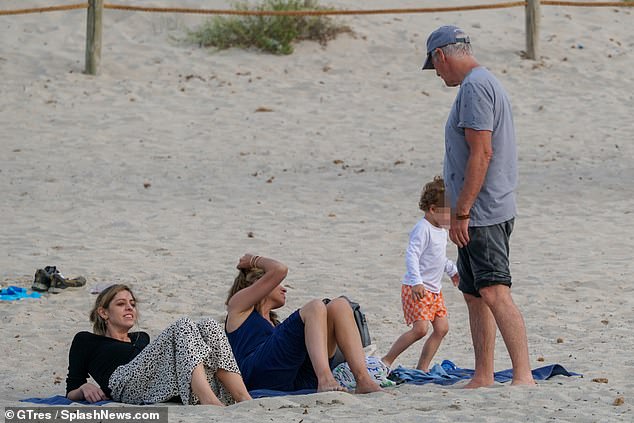 Crusing: The family of four have been enjoying the spoils of a yacht in recent days 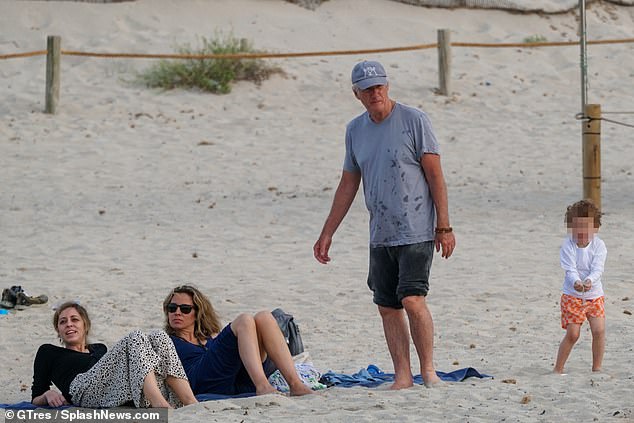 Keen eye: The parents kept a close on on their sons as they laid on the sand 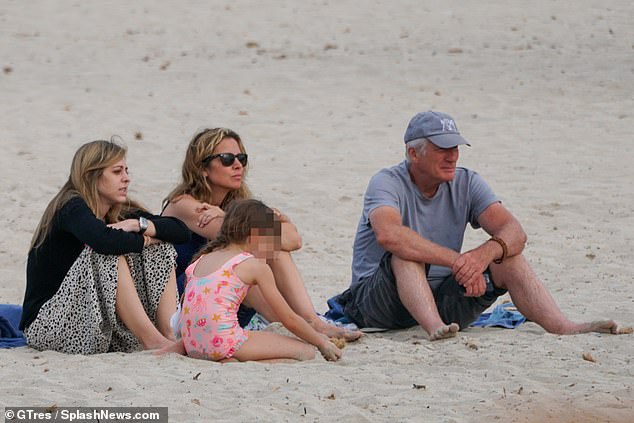 Scenic: At times, the couple just soaked in the gorgeous sights of Ibiza

After spending a good part of the afternoon on the beach, Gere gathered up the family and got into a small tube boat for a ride back to the yacht they’ve been enjoying in recent days.

On more than a couple of occasions, the longtime Hollywood star could be seen soaking in the sights and sun from various vantage points of the luxury vessel.

Gere and his wife initially had a long-distance romance, splitting their time between the U.S. and Spain, but now live in New York.

Along with their two sons, the couple also have children from previous relationships: Gere and his second ex-wife Carey Cowell have a 22-year-old son Homer, 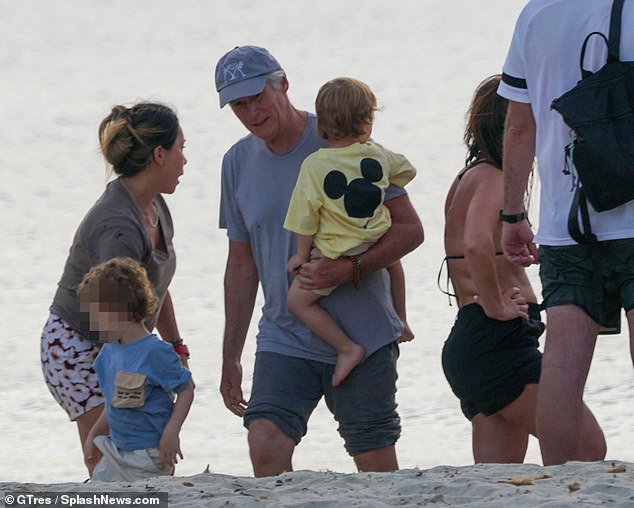 Onwards: Gere gathered up their stuff and proceeded to make their way to a tube boat 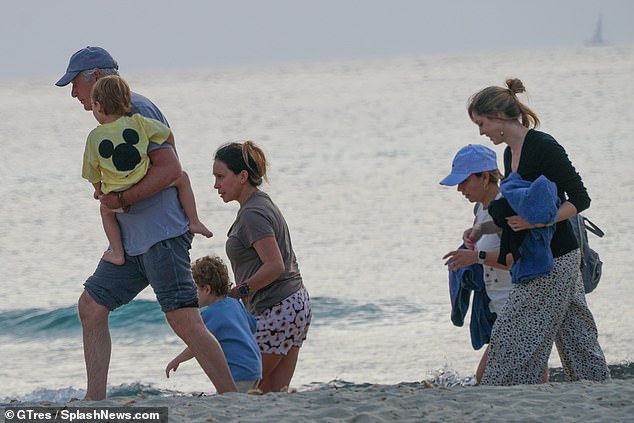 On the go: Gere decided to carry one of his boys to the small boat 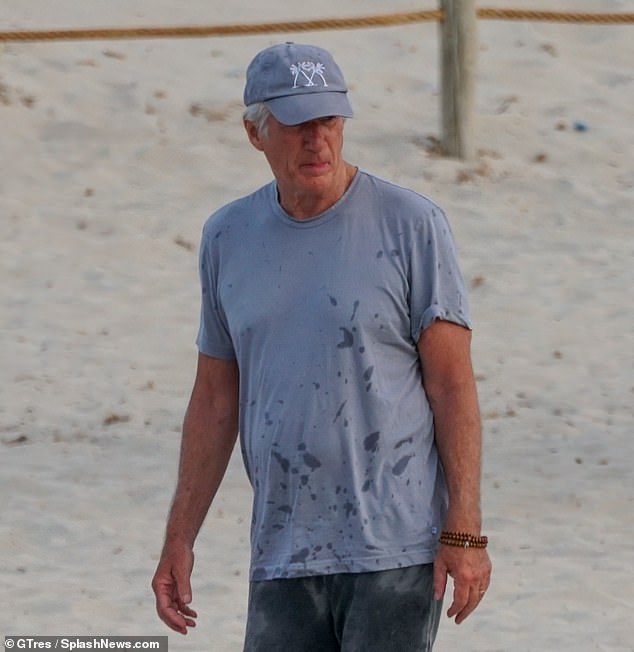 Casual: The Chicago star kept it sporty in the fashion department

Silva, who’s the daughter of Ignacio Silva, a businessman and the former Vice President of Real Madrid Football Club, and her first husband Govind Friedland, co-parent their nine-year-old son Albert.

While seeming to choose to pull back from his Hollywood work load, Gere’s last on-screen appearance came in the BBC Studios series MotherFatherSon, that premiered in March 2019.

His latest film role came in the drama The Dinner, which dropped in February 2017, and the drama Three Christs later that same year in September. 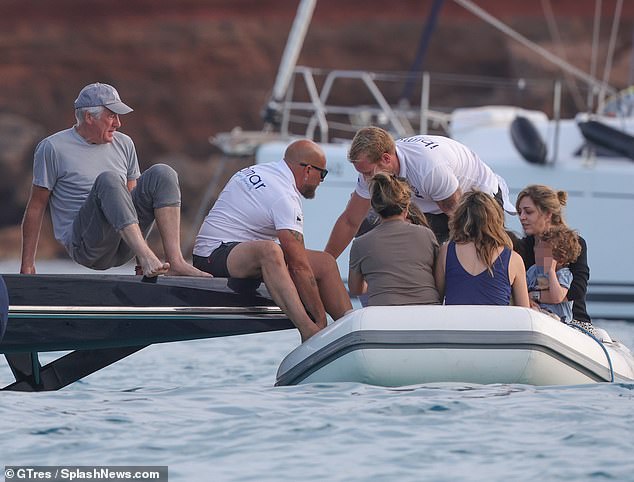 The high life: The family caught a ride on a small tube boat back to their yacht 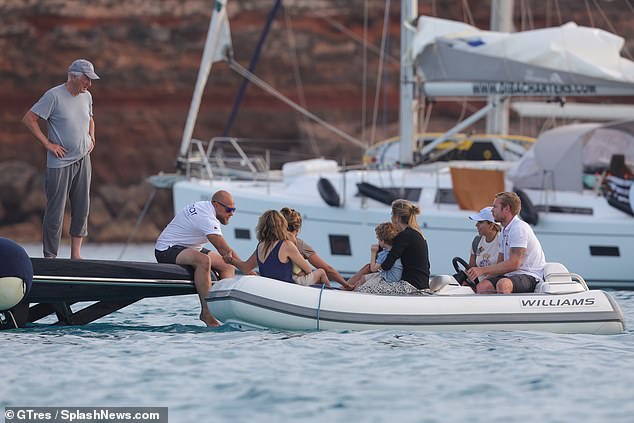 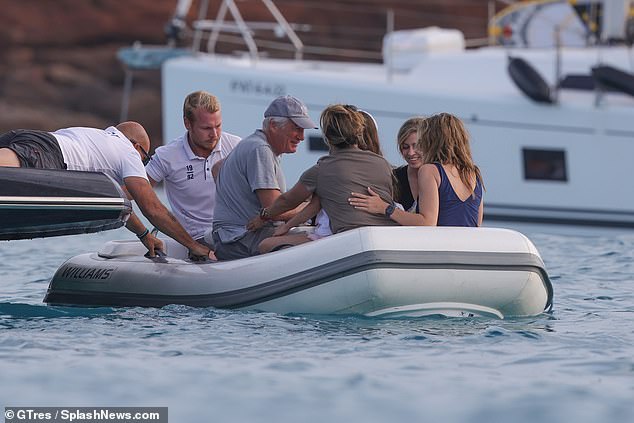 Safety first: The couple and their friends got off the small boat after it was secured 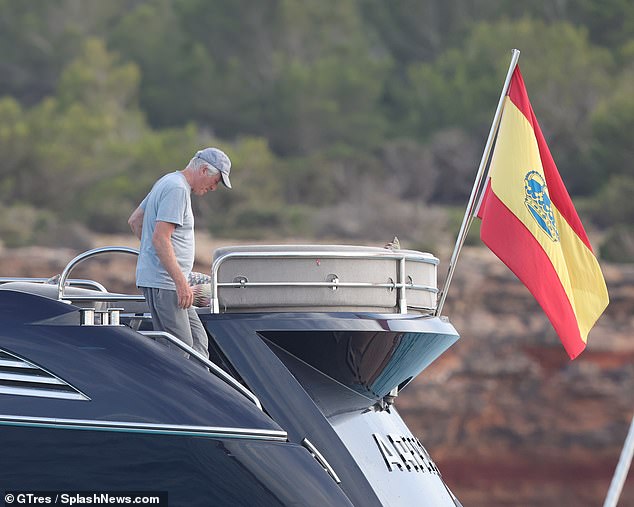 Holiday: Gere has spending sen jumping into the sea from the yacht this week