Rita Moreno speaks out about botched abortion she had before Roe v. Wade

Rita Moreno spoke out this Friday about the botched illicit abortion she had during her romance with Marlon Brando, years before Roe v. Wade.

Her remarks came the day the US Supreme Court overturned Roe, the landmark 1973 ruling that guaranteed abortion rights throughout the country.

The 90-year-old told Variety she had her pregnancy terminated by ‘a real doctor – Marlon paid him $500 – as opposed to something in a back alley.’ 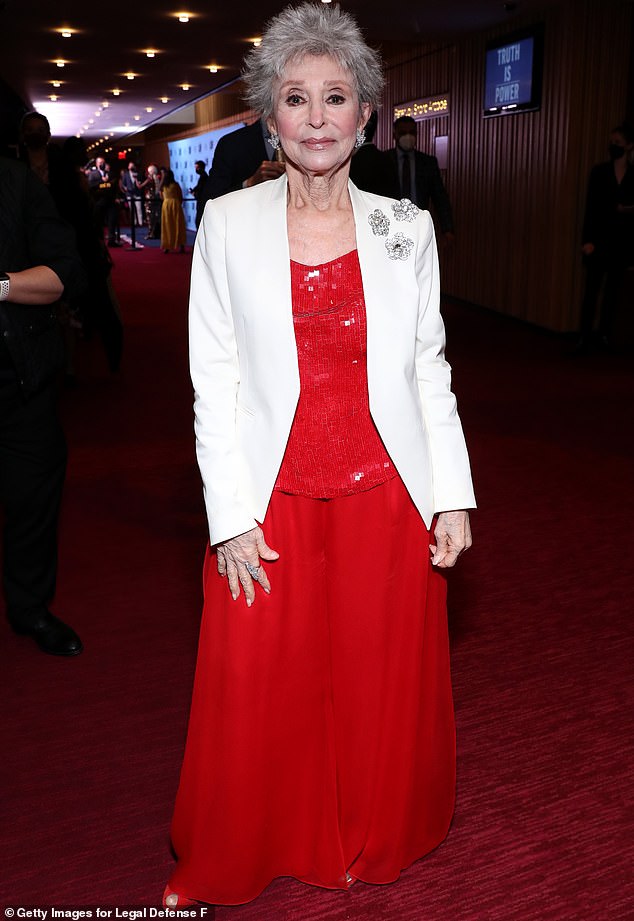 Looking back: Rita Moreno spoke out this Friday about the botched illicit abortion she had during her romance with Marlon Brando, years before Roe v. Wade

Rita and Marlon met in 1954 and began a tempestuous eight-year affair that was scarred by his womanizing and eventually drove her to attempt suicide.

During the time that he was with Rita, Marlon married his first two wives and produced children with both of them.

Rita wrote in her memoirs that when she herself became pregnant: ‘To my shock and horror, Marlon immediately arranged for an abortion.’

She claimed that Marlon would not even pick her up after the illicit procedure himself, enlisting one of his friends for the task instead. 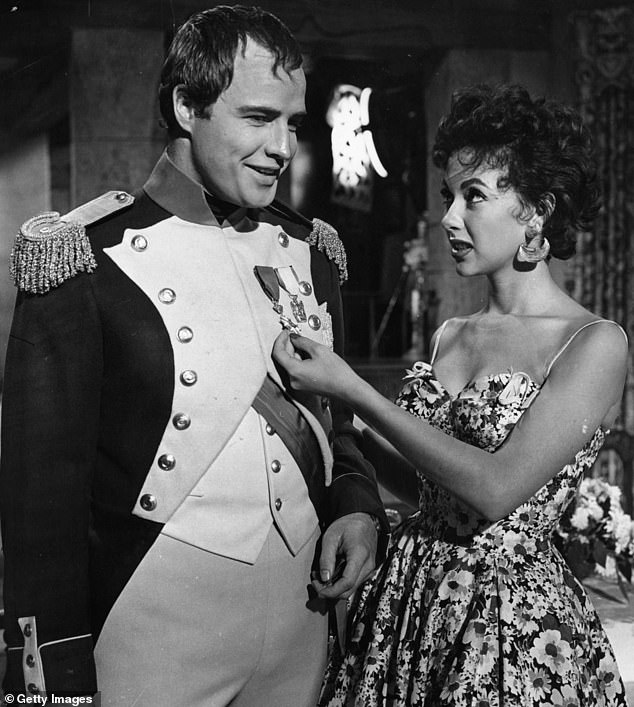 The way they were: Rita and Marlon met in 1954 on the set of Desiree, where they are pictured, and began a tempestuous eight-year affair

In her new Variety interview, she remembered that ‘Marlon found a doctor through some friends’ to perform the abortion.

‘Marlon took me to the hospital. I had what they told me was a ‘disturbed pregnancy.’ The doctor didn’t do anything really, except make me bleed. In other words, he didn’t do it right,’ she shared. ‘I didn’t know it then, but I could have died. What a mess. What a dreadful mess.’

In her memoirs she laid out the medical problem in further detail, explaining that as a consequence of the bungled procedure she still had a dead fetus in her body and had to dash to the hospital to have it excised.

Her boyfriend’s response was to be furious that the abortionist had ‘taken’ him, Rita recalled. ‘Marlon wanted his money back!’ 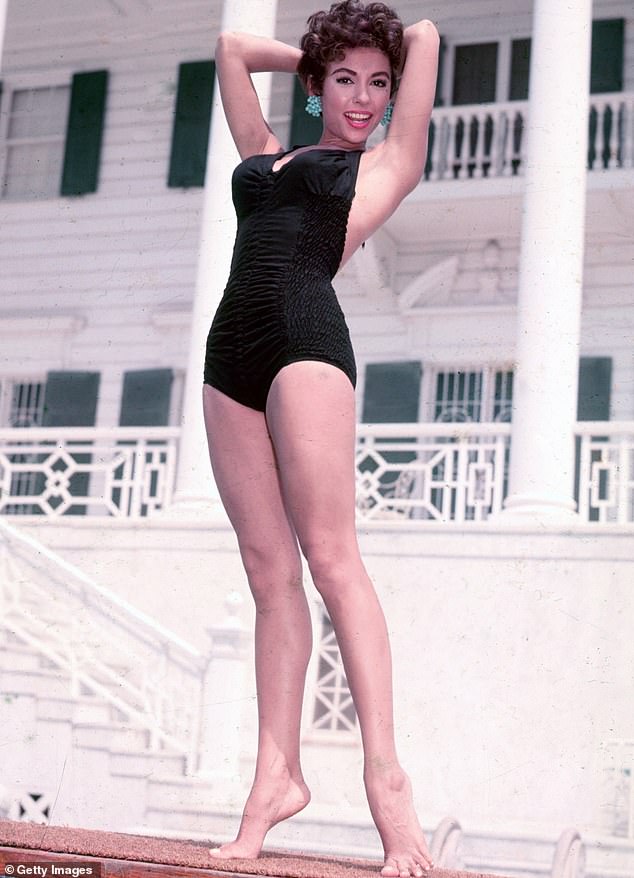 ‘What a dreadful mess’: Rita, who is pictured in 1955 during her romance with Marlon, revealed in a new Variety interview that she ‘could have died’ from her bungled abortion

She told Variety this Friday that she was ‘jubilant’ when Roe v Wade was issued and has been left ‘depressed’ by the decision to overturn it.

The power to set abortion laws has now reverted to the states, 13 of which already had ‘trigger’ abortion bans on the books ready to take effect when Roe was gone.

In a concurring opinion to the new ruling, Justice Clarence Thomas urged the Supreme Court to reevaluate other past liberal rulings that federally guaranteed the right to same-sex marriage, homosexual activity and contraception.

However the rest of the six conservative members of the Supreme Court did not join in Justice Thomas’ concurrence. 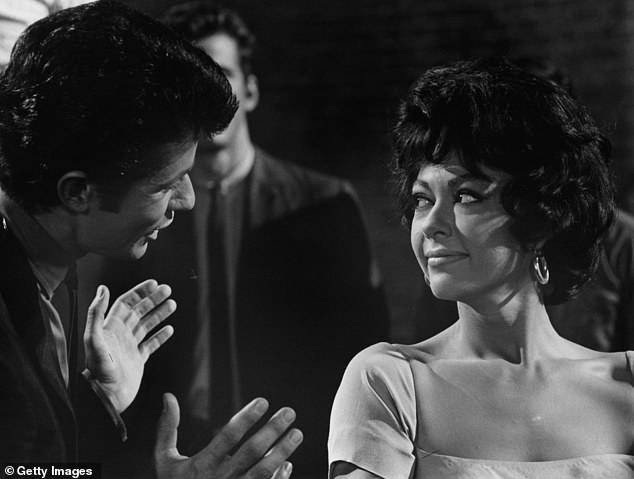 Iconic moment: Rita is pictured with George Chakiris in West Side Story, the movie that garnered her an Academy Award shortly after her split from Marlon

Protests broke out this Friday in cities including New York, Los Angeles, San Francisco and Phoenix, as well as Washington, DC, where the Telegraph reports that riot police have sealed the Supreme Court’s perimeter.

Referring to her own botched abortion, Rita told Variety: ‘I can see that thing happening now and going back to back alleys. I’m really nervous and frightened and horrified that this is taking place. I can’t believe that some of those people are telling us what to do with our bodies.’

She declared: ‘Hilary Clinton warned everybody about this. I’m not shocked because I saw it coming but I’m stunned.’ 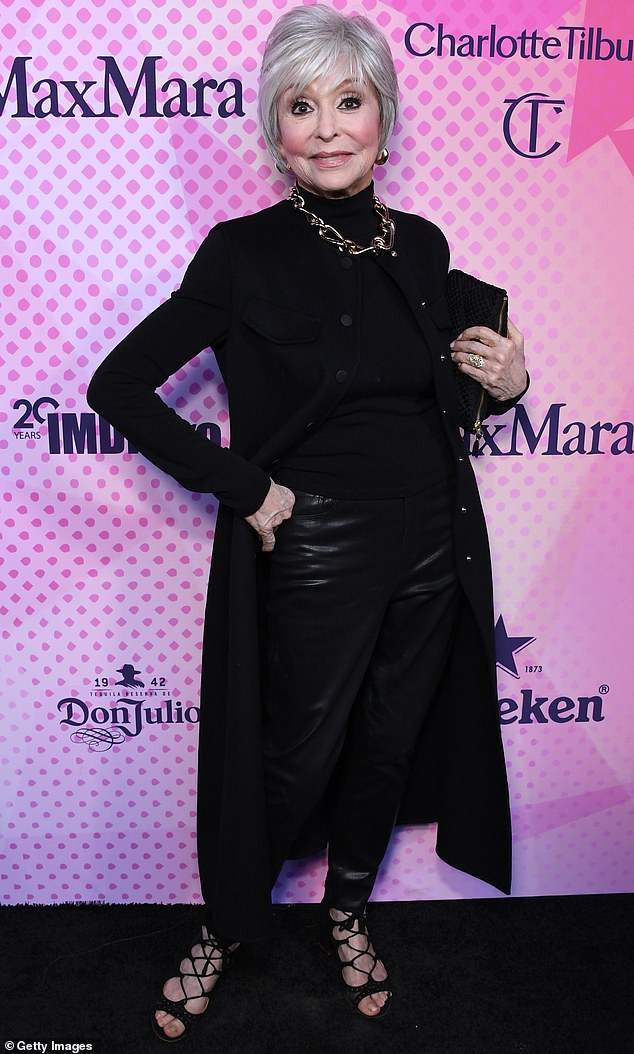 Her view: She told Variety this Friday that she was ‘jubilant’ when Roe v Wade was issued and has been left ‘depressed’ by the decision to overturn it; pictured this March

Rita said: ‘I think about the young girls. Taking it to the most extreme, girls who get pregnant because of rape or incest. Unfair isn’t a strong enough word, but it’s unfair.’ She added: ‘I’m sorry I’m not the most articulate today but I’m just shocked.’

She went on: ‘We loud mouths are going to have to get busy. There are many of us. I’m thinking what are we going to do about this? If anything, this has reactivated us.’

After Rita’s abortion, Marlon struck up an affair with his Mutiny On The Bounty co-star Tarita Teriipaia, who became his third and final wife.

Rita was so distraught she overdosed on Marlon’s sleeping pills in what she described as not ‘a revenge suicide, but a consolation, an escape-from-pain death.’ 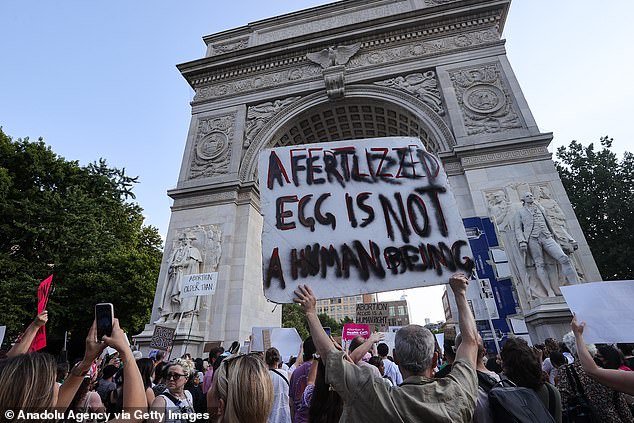 Demonstration: Protests broke out this Friday in cities including New York (pictured), Los Angeles, San Francisco and Phoenix, as well as Washington, DC

Marlon’s assistant came upon Rita in the nick of time and she survived the suicide attempt after getting her stomach pumped in the hospital.

She and Marlon finally stopped having contact with each other at the urging of Rita’s therapist, and shortly thereafter she won her Oscar for West Side Story.

‘We were really addicted to each other,’ Rita told the Wall Street Journal decades later. ‘And you know, addictions are very, very difficult to get rid of, very.’