Rod Stewart and seven of his children on Portofino trip

Father-of-eight Rod Stewart was making his own style rules when she went on a family outing in Portofino on Sunday.

The rocker, 77, was sporting his world-famous mullet and a wild spotty shirt from Dolce And Gabbana, teamed with paint-splattered white jeans.

He completed his look with a pair of espadrilles, while his beautiful wife Penny Lancaster, 51, wore a simple summery dress and sandals. 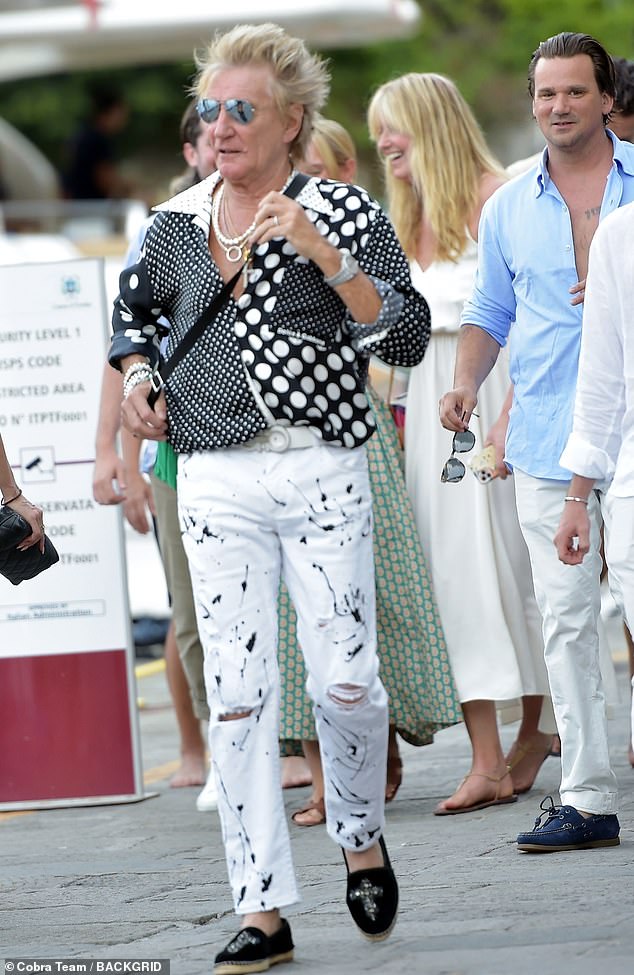 You Wear It Well: Rod Stewart wore a wild spotty shirt and paint-splattered jeans as he and wife Penny hung out with seven of his children on Portofino trip on Sunday 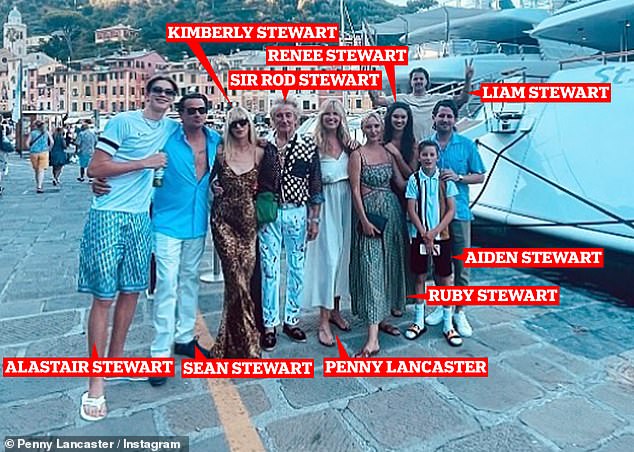 Family affair: Penny, 51, shared a rare snap of herself with Rod Stewart the brood on social media

They were accompanied by seven of Rod’s children on the day out as the group were seen larking around and posing for group photos by the water’s edge before heading to dinner. 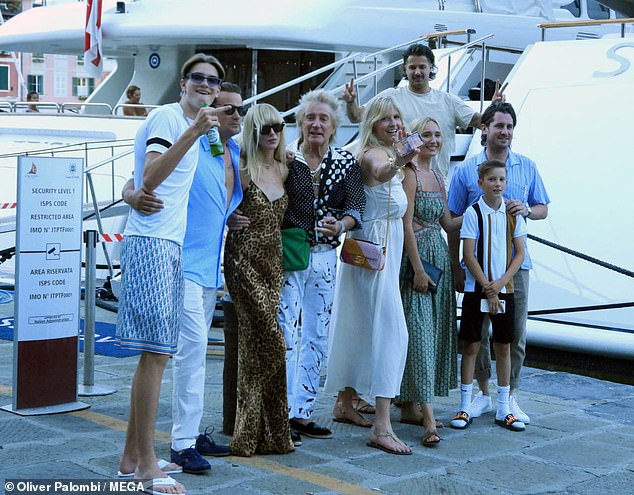 Snap happy: There were a good few attempts at that photo opp before Penny selected one they all liked

Summer’s here! Penny looked lovely in a simple summery dress and sandals after a shopping trip 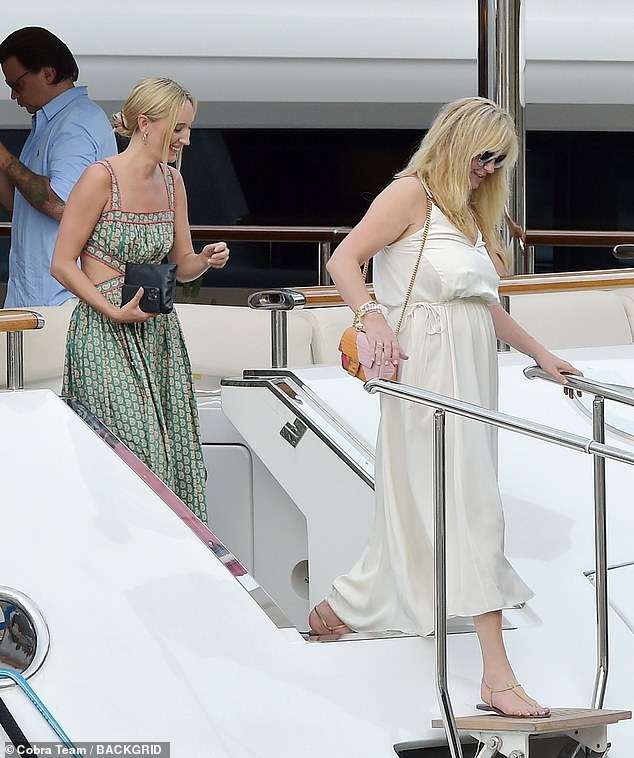 Getting along well: Penny and Ruby had a little giggle as they stepped off the boat 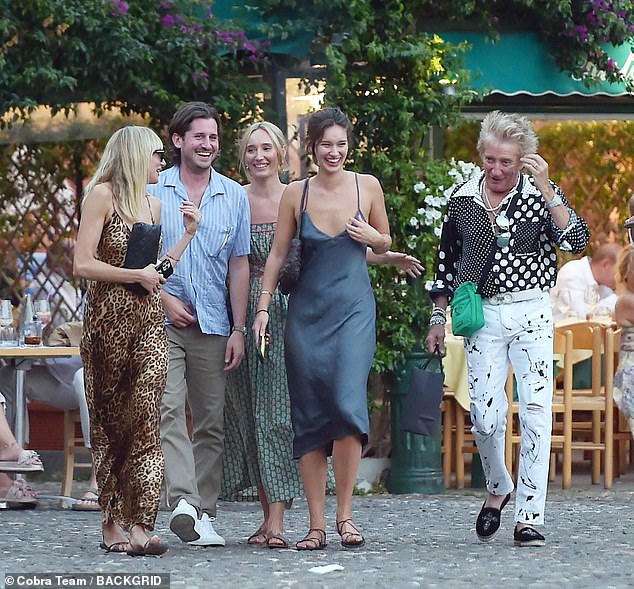 Lovely to see: The family are clearly all very close and appeared to be having a great time 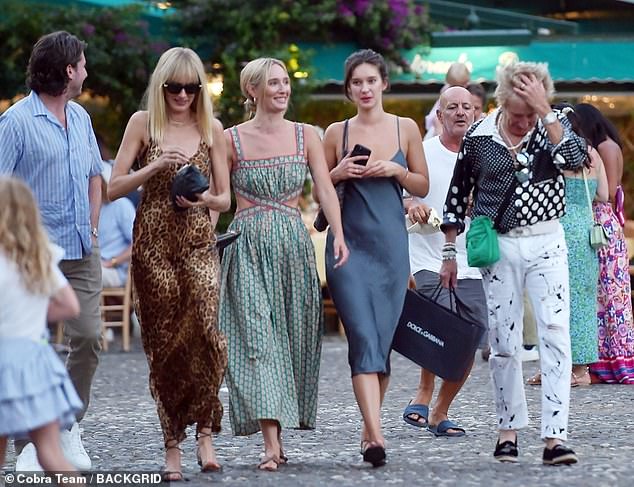 Hair he goes! Rod combed his hand through his famous mullet as he was joined by seven of his offspring

‘My little brother has his own billboard in Milan,’ gushes his half-sister, Ruby, 35, after seeing huge images of him plastered all over the world’s fashion capital.

Kimberly, 42, and Sean, 41, are from Rod’s first marriage to actress, Alana Stewart, 77, and daughter Ruby, 35, is from his relationship with model Kelly Emberg, 63. 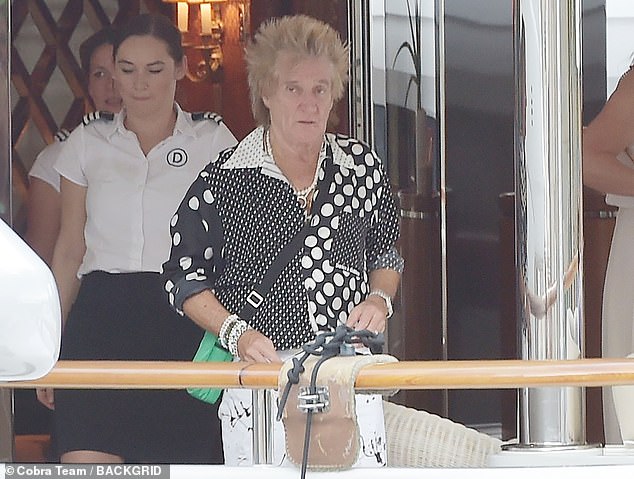 Bold and beautiful: Rod threw on a green bag which added a pop of colour to his already striking look 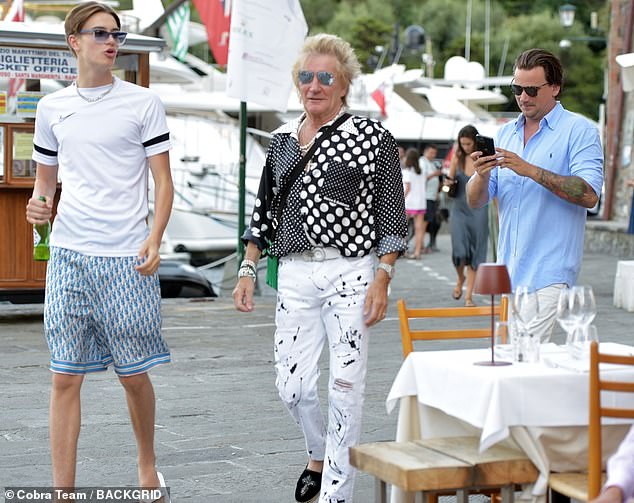 Lads! He was dwarfed by his son Alistair, (left) who he shares with wife Penny and was also with son Sean, (right), from his first marriage to actress, Alana Stewart 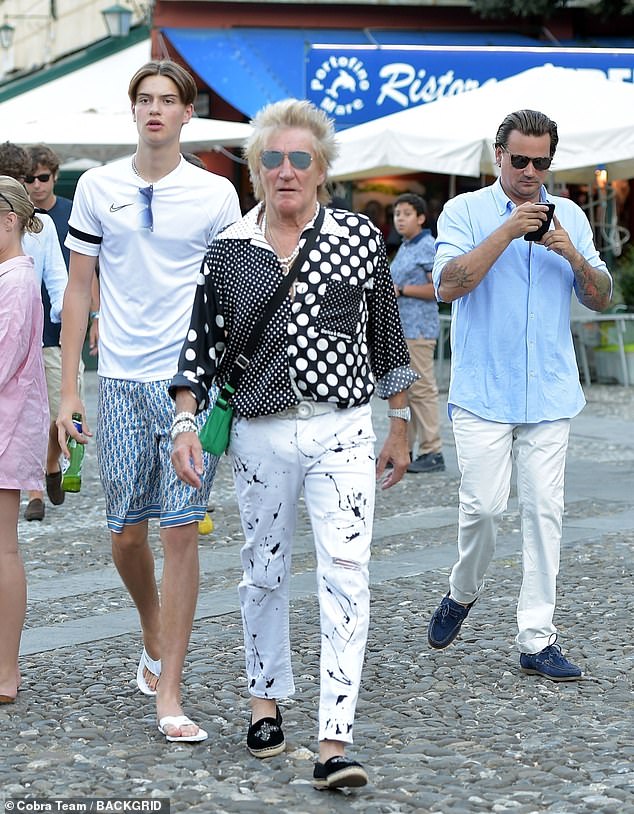 Model behaviour: Alistair has just signed a deal with fashion brand Palm Angels and his billboards are displayed in Milan 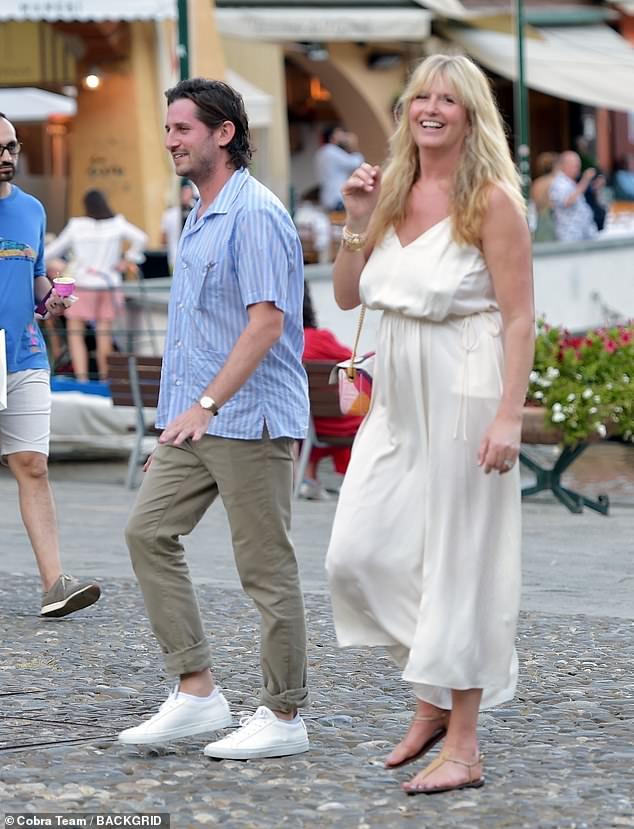 What a woman! Penny had the giggles as she walked along the promenade 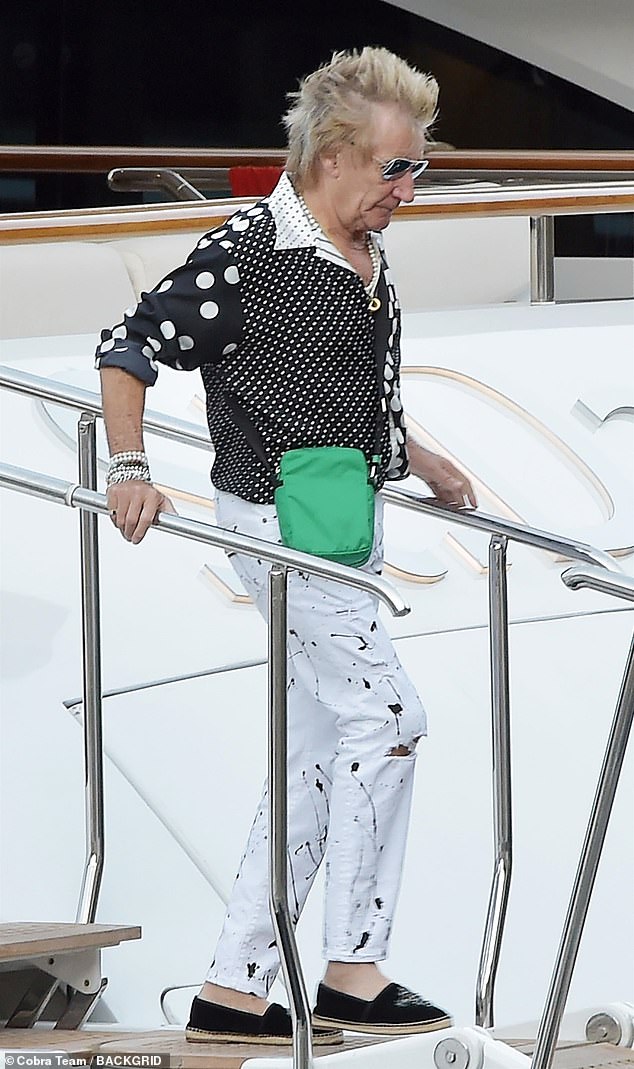 We Are (Not Quite) Sailing! Rod steadied himself on the handrail as he prepared to disembark 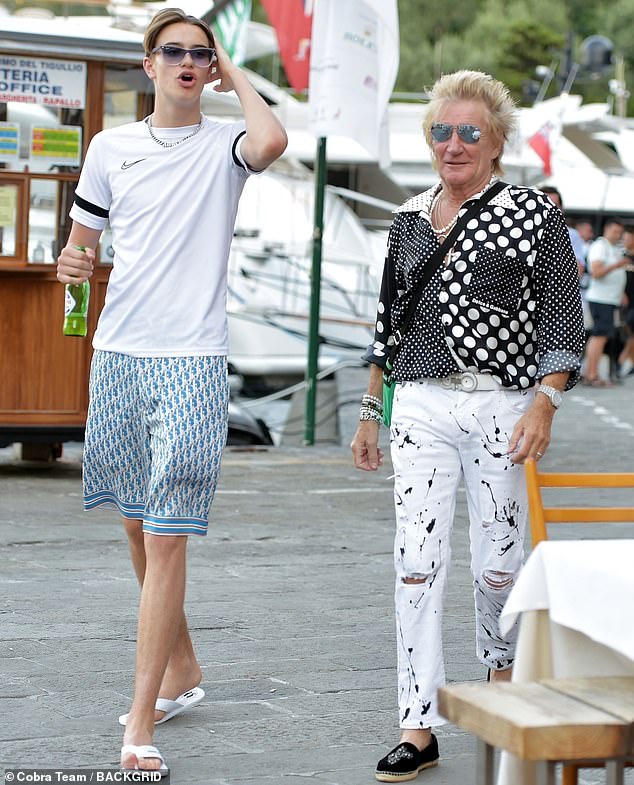 Rod’s first born child is Sarah Streeter, 58, who was raised by her adoptive parents Gerald and Evelyn Thubron. She was not on the trip.

Meanwhile, the Maggie May hitmaker is taking a little break from his North American tour.

He is next set to take to the stage in Michigan on Friday night, followed by show-stopping performances in Massachusetts, New Jersey and New York later in August. 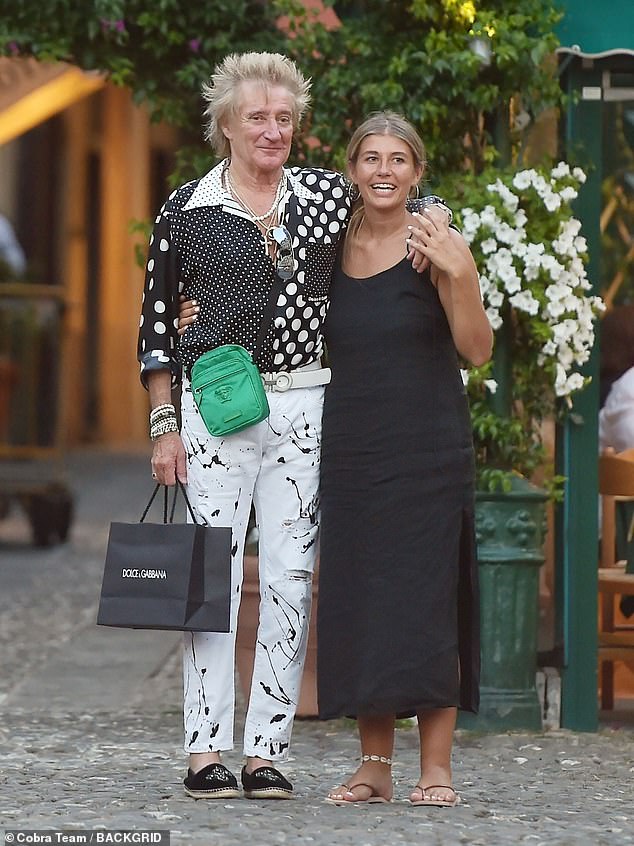 A total gent! Rod threw his arm around a fan as he paused for a moment 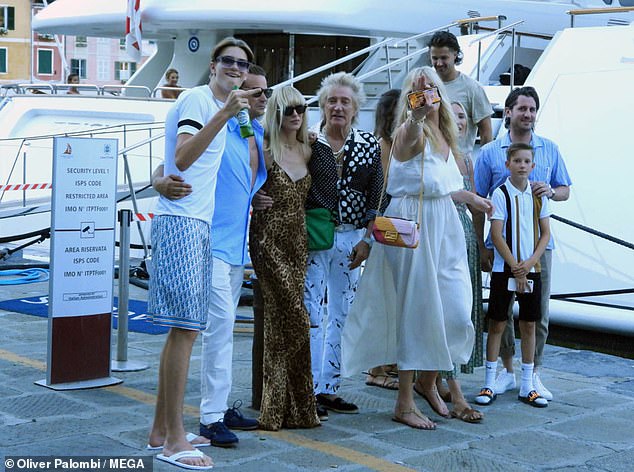 Here you go! Penny held out her phone to a passer by to get that snap 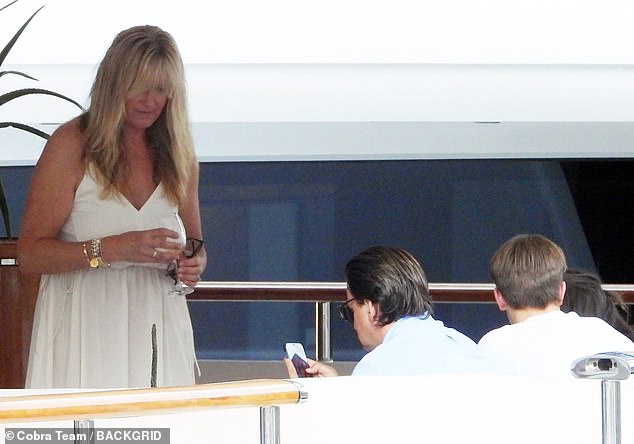 Priorities: She gazed into her wine glass while the rest of the group were glued to their phones 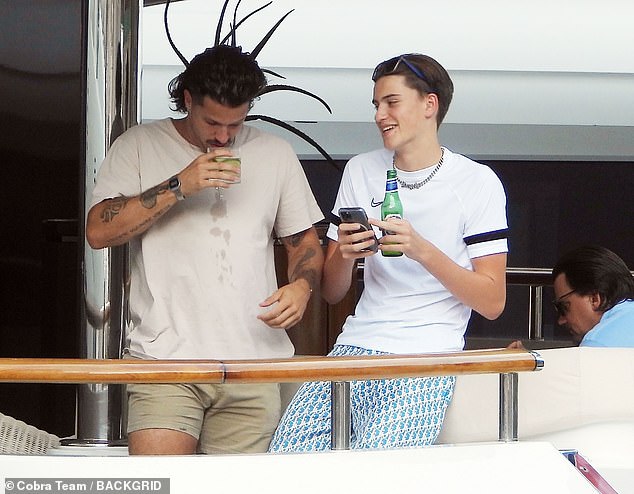 Oh no! Liam made his brother laugh when he spilled his drink down himself 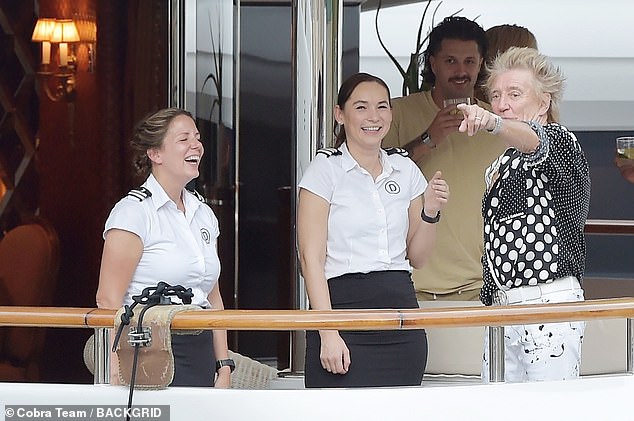 Look over there: Rod entertained the staff on the boat with his antics