Romee Strijd showcased her burgeoning baby bump as she donned purple lingerie in a new ad for Lounge Underwear.

On Friday, the 26-year-old former Victoria’s Secret Angel shared a snap in which she was seen holding her belly while posing in front of a bathroom mirror. 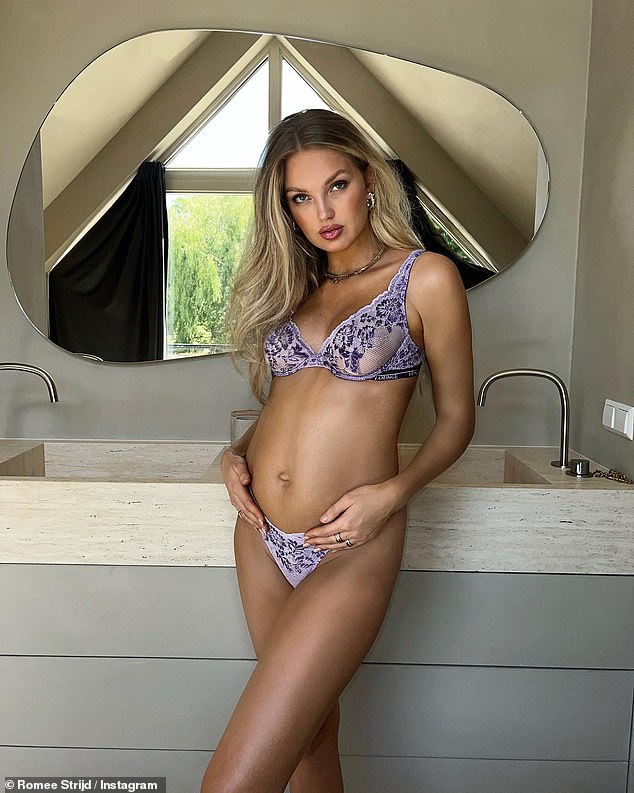 The blonde beauty’s long tresses were styled in a voluminous waves that cascaded around her shoulders. 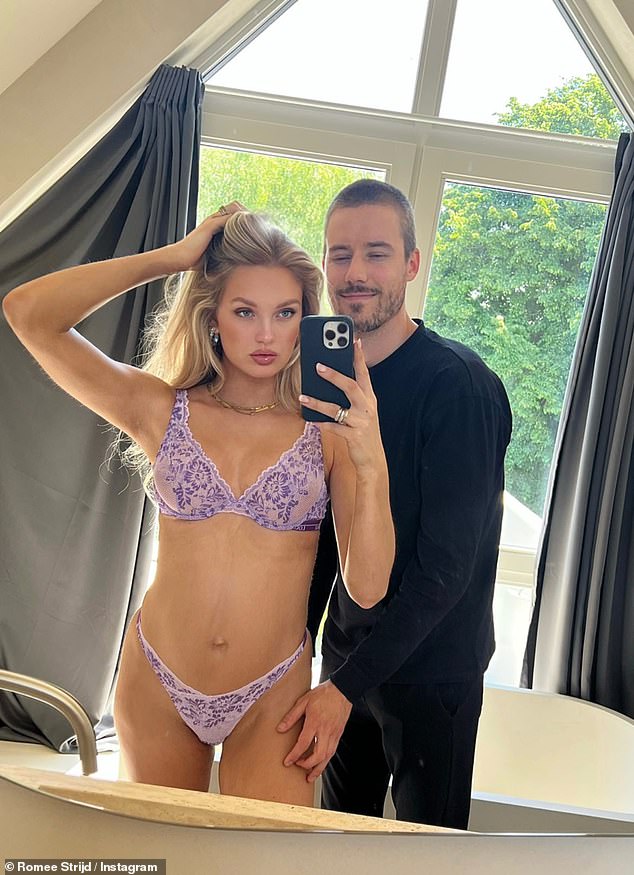 Romee accentuated her pout with glossy coral lipstick and highlighted her cheekbones with a rosy contour blush.

The Dutch Vogue cover star gave the camera a sultry stare as she leaned against the sink in the stylish modern bathroom. 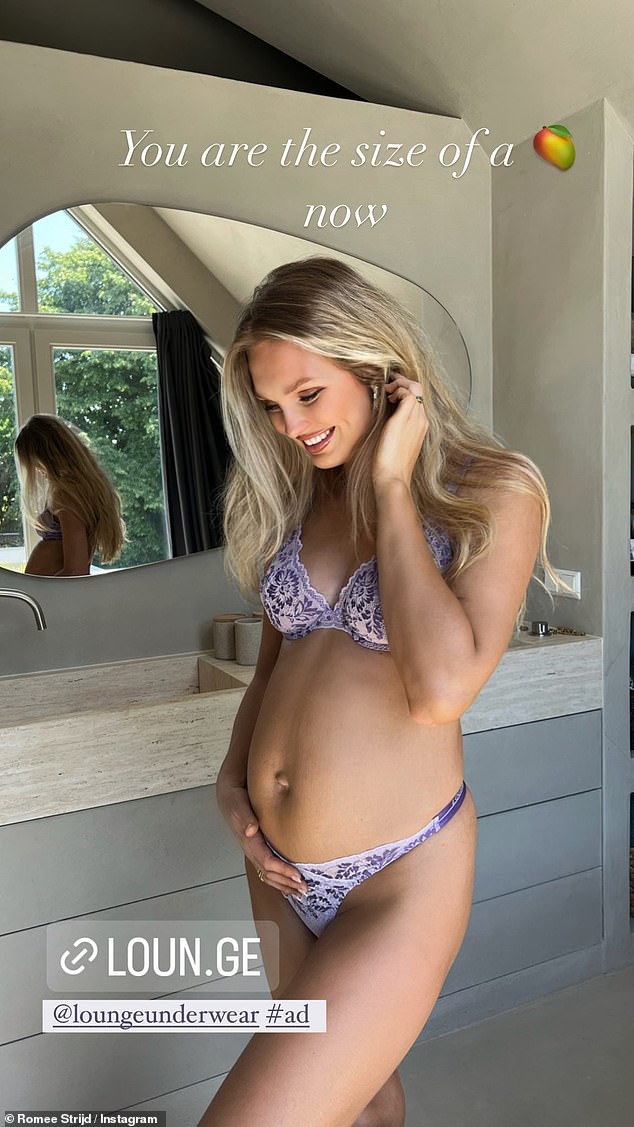 The couple are already parents to 17-month-old daughter Mint, who they welcomed in December 2020.

The vlogger took to her Instagram Story to share additional snaps from her Lounge Underwear photo shoot including one in which Lauren appeared with her.

The Party Pants founder beamed proudly as he rested his hand on Romee’s thigh while she brushed her hair back and snapped a selfie.

The son of television presenter Bert van Leeuwen was clad in an all-black ensemble comprised of a long-sleeved shirt and trousers.

Romee also posted another photo in which she turned to the side and beamed while holding her bump. 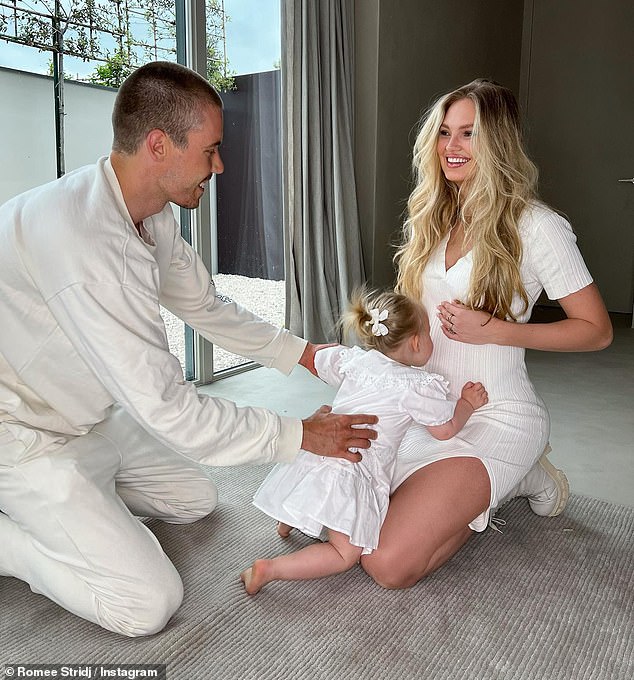 Happy news: At the end of May, Romee announced that she was pregnant with her second child in an Instagram post

She wrote on the image, ‘You are the size of a [mango emoji] now.

At the end of May, Romee announced that she was pregnant with her second child in an Instagram post.

She shared a photo in which she was seen with Laurens and Mint with the caption: ‘Soon we will be a family of 4. Can’t wait.’

On the announcement of their first child, Romee spoke about motherhood being her “biggest dream” amid fears about “natural” conception surrounding her diagnosis of Polycystic Ovary Syndrome. 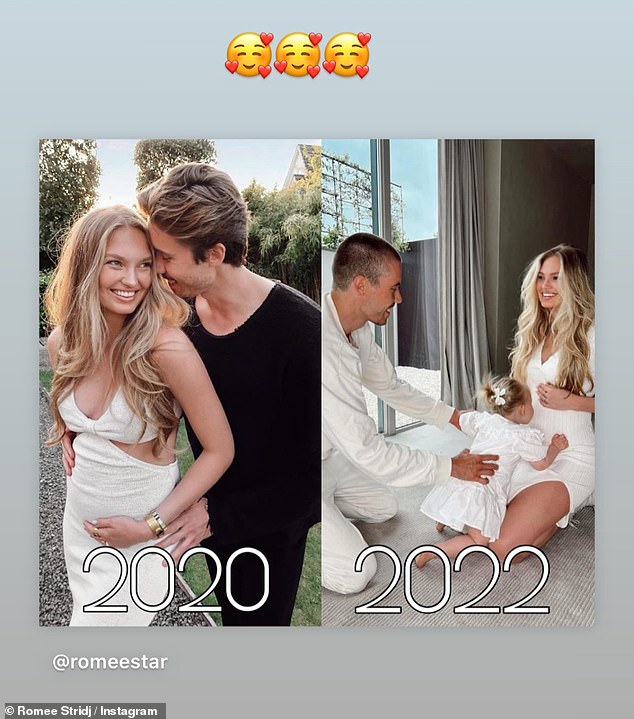 Growing family:  She shared a photo in which she was seen with Laurens and Mint with the caption: ‘Soon we will be a family of 4. Can’t wait.’

She wrote: ‘WE’RE SOON A FAMILY OF THREE. Being a mom … is my biggest dream. I was so scared that I would never be able to because I got told it was harder to get babies in a natural way.’

Romee explained that throughout her career, she had “pressured [her] body too much” as she admitted she bypassed restrictive dieting and had relocated back the Netherlands to be closer her family.

She said: ‘I think my weight was not good for my body to function properly and couldn’t handle the constant traveling. 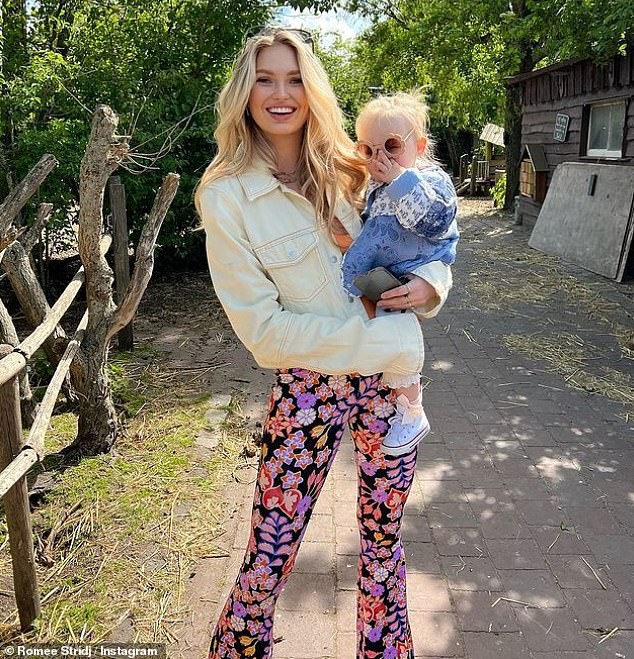 ‘I started to research natural healing for PCOS and came to the conclusion that I should do way less high intensity training, don’t restrict foods, be nice to myself, and take breaks when needed.’

She said: ‘This year has been so special. Our lifes [sic] have changed completely, from always on the go and working non stop to being your mom and dad in the Netherlands surrounded by family.

‘ You make us smile every day (and tired every morning).’

The next month, the Alexander McQueen model revealed her engagement, writing “I said YES,” on a photo from their holiday in Switzerland. 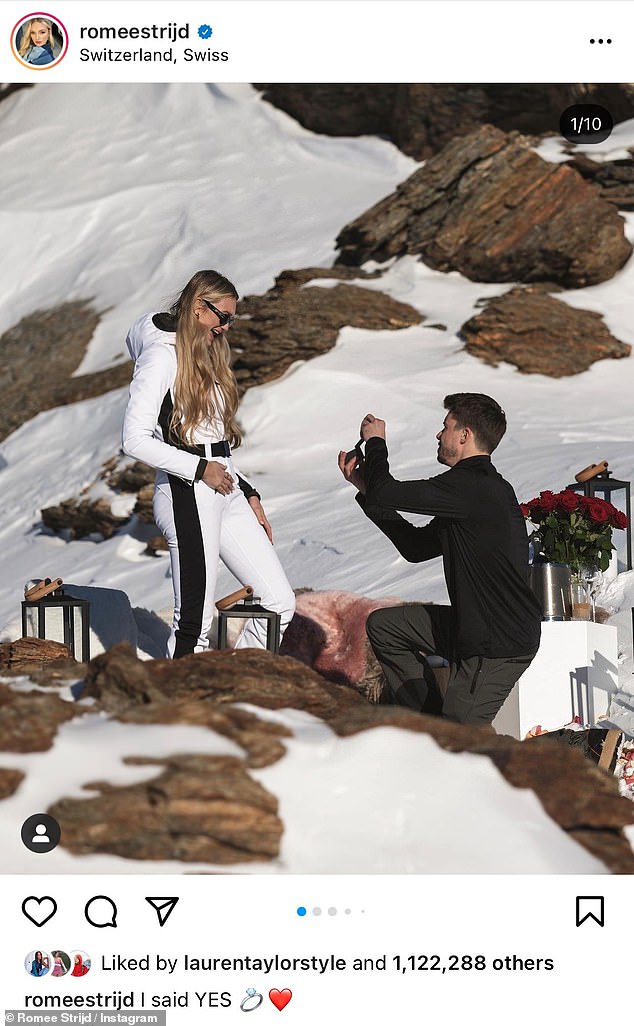 I said yes: The Dutch model accepted Lauren van Leeuwen’s marriage proposal during a romantic trip to the Swiss Alps