Romee Strijd wears a bikini in the snow

Bikini in the snow! Victoria’s Secret model Romee Strijd is the latest star to wear swimwear in a winter wonderland for Instagram likes

By Heidi Parker For Dailymail.com

Supermodel Romee Strijd is the latest celebrity to strip down to her bikini when in a snowy destination.

The eye popping photo was shared to Instagram on Tuesday and received almost 250,000 likes in less than 15 hours from her 7.3million Instagram followers.

The blonde bombshell explained the image was a throwback shot to when she got engaged to Laurens Van Leeuwen in Switzerland in January. 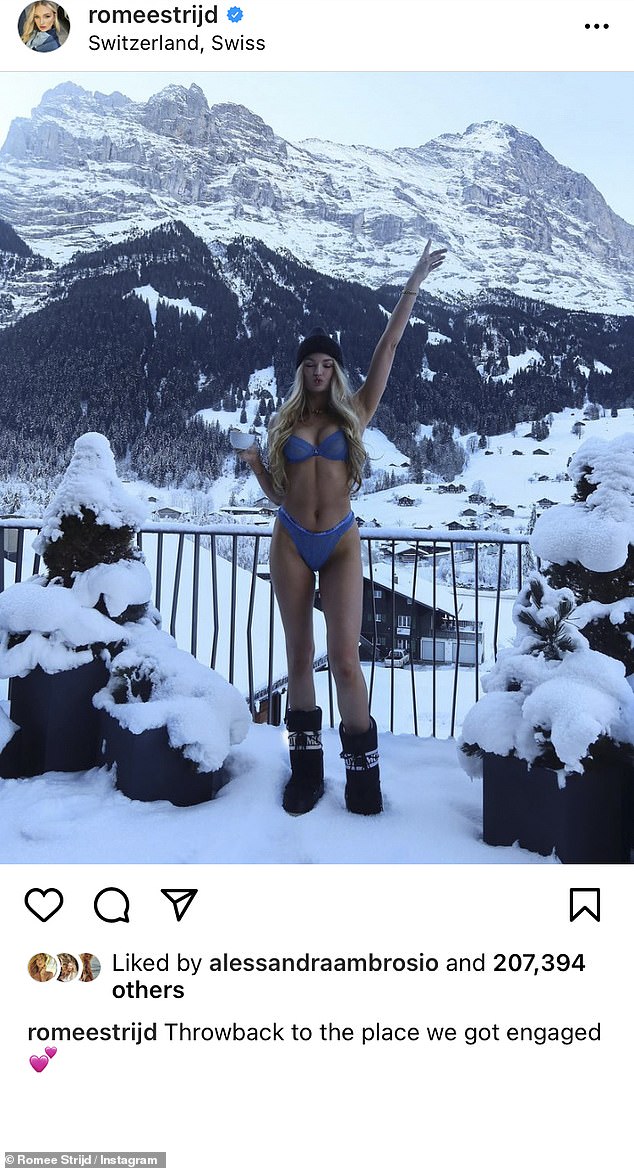 Like this please: Supermodel Romee Strijd is the latest celebrity to strip down to her bikini when in a snowy destination. The eye popping photo was shared to Instagram on Tuesday and received almost 250,000 likes in less than 15 hours from her 7.3million Instagram followers

Romee looked fit in the little blue suit with a triangle top and little briefs with her blonde hair down and a cap on.

And she had boots on to keep her feet from freezing while holding a cup of coffee.

Kim Kardashian and her sister Kourtney as well as Kendall Jenner have also been known for posing in beach wear while in the snow.

And Emily Ratajkowski and Nina Dobrev have done the same.

It often gets many likes on social media because it evokes a 1970s James Bond image.

The 26-year-old Dutch star said yes when on the slopes in Switzerland during a ski vacation with her beau of 12 years in January. 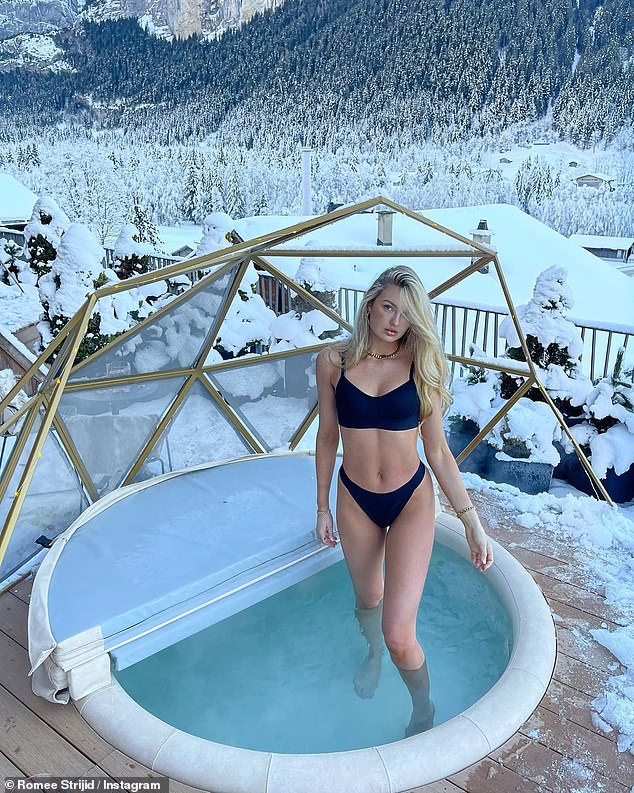 Happy in the icy cold: The looker was seen in January in a dark bikini while in a hot tub

The two have a daughter together already named Mint, age one.

During the romantic proposal Romee is seen in a white ski suit with a black stripe down the sides and a hoodie pulled back. The suit had a black belt and arrows on the front pockets.

The Vogue model’s long blonde hair worn down as she had on pretty makeup. She is also seen looking down at her boyfriend who wears a black top and green ski slacks.

He is down on one knee as he holds up the rock asking to marry the cover girl.

STARS POSE IN THEIR BIKINIS WHILE IN THE SNOW

‘I said YES,’ the leggy lingerie model wrote in her caption as her pal Josephine Skriver congratulated her.

At the proposal location there were red roses and a spread of food that included boiled eggs over avocado toast, fruit, cut vegetables, a bottle of water and a bottle of champagne on ice.

The star has been documenting her ski trip on social media this week.

The looker was seen the day before in a dark bikini while in a hot tub with the snow all around her.

‘Another day in Switzerland,’ the star captioned her picture, adding a snowflake emoji.

Romee previously posted a picture last Wednesday of herself boarding a private jet and said, ‘Off to Switzerland with my love.’

She even posted a picture of herself in front of a helicopter. 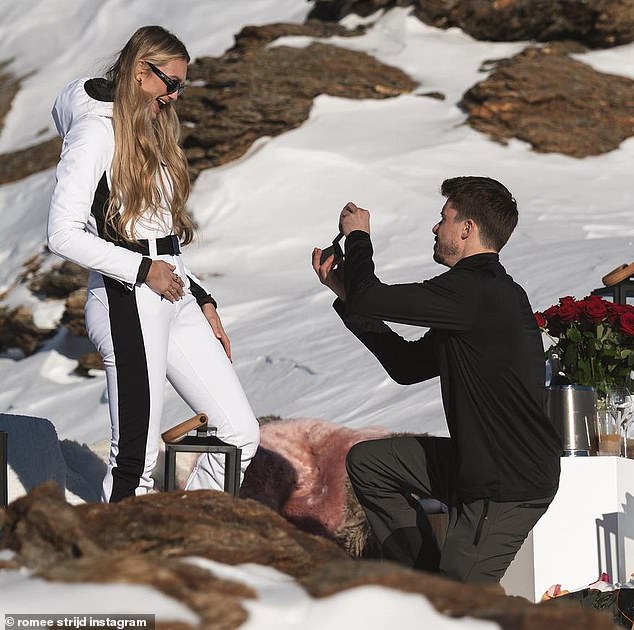 The proposal: Supermodel Strijd got engaged to Laurens Van Leeuwen in January 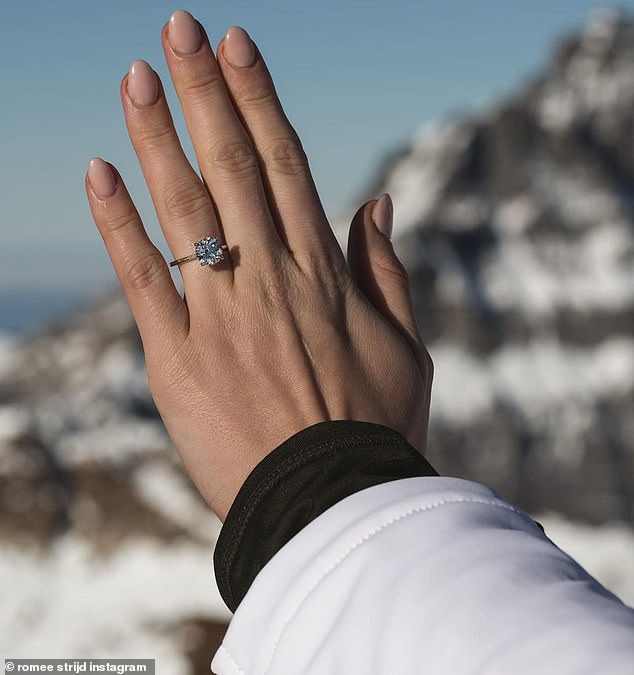 The rock is incredible: The star even showed off her solitaire diamond engagement ring

‘Baby it’s cold outside,’ Romee captioned this picture as she wore a white snow suit and black gloves. She had her long blonde hair down as she smiled for the camera.

She and her new fiancé grew up in the same town, Zoetermeer, South Holland, but didn’t start dating until years later.

They welcomed their first child together — a daughter named Mint — in December of 2020.

Last month Romee said she was thrilled with her mini-me girl.

‘Can’t believe Mint is already turning 1 today… this year has been so special,’ Romee said.

‘Our lives have changed completely, from always on the go and working non stop to being your mom and dad in the Netherlands surrounded by family.’ 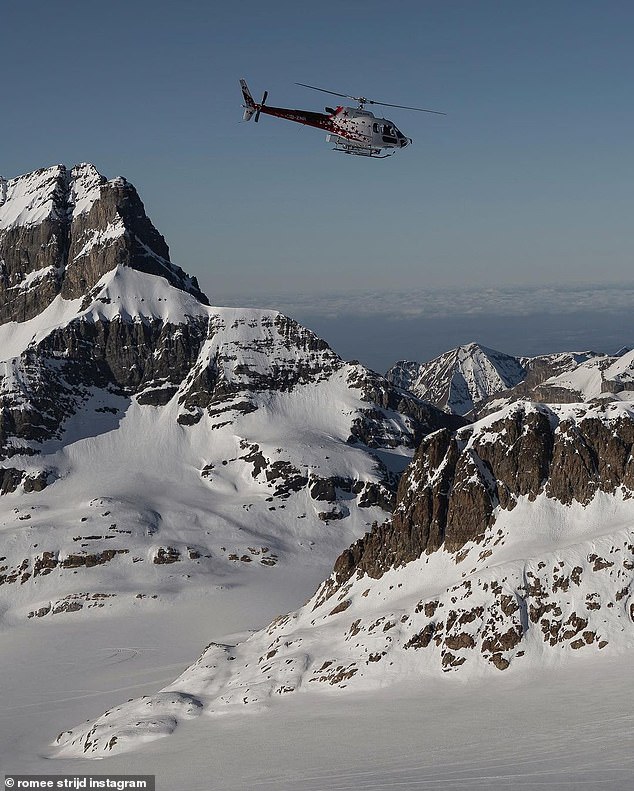 Taking it all in: There was a helicopter circling above their winter wonderland in the mountains