Romeo Beckham and Mia Regan have taken centre stage in the campaign for the debut PUMA and AMI collaboration, which is designed to not ‘conform to a specific gender’ and challenge ‘current views’.

In December, it was announced Romeo, 19, had signed a long-term deal with sports brand PUMA worth a reported £1.2million.

And the son of former footballer David Beckham, 46, and his fashion designer wife Victoria, 47, shared some sultry snaps shot by photographer Eddie Wrey of Romeo posing with his model girlfriend Mia, 19, on Instagram on Saturday. 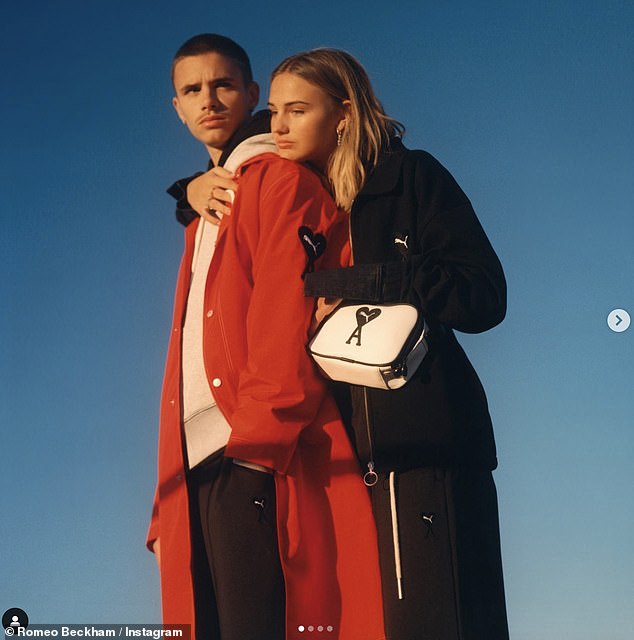 Model behaviour: Romeo Beckham and Mia Regan, both 19, have taken centre stage in the campaign for the debut PUMA and AMI collaboration

In one image from the campaign, Romeo is seen wearing a long red coat over a white hoodie which he teams with a pair of black trousers as Mia stands behind with her arm wrapped around him.

Mia wore a black tracksuit and carried a white bag with a black heart on the front as she rested her chin on his shoulder.

In another picture, Romeo gazes at the camera while wearing a black PUMA coat and white hoodie while Mia again stands behind him donning clothes by the brand. 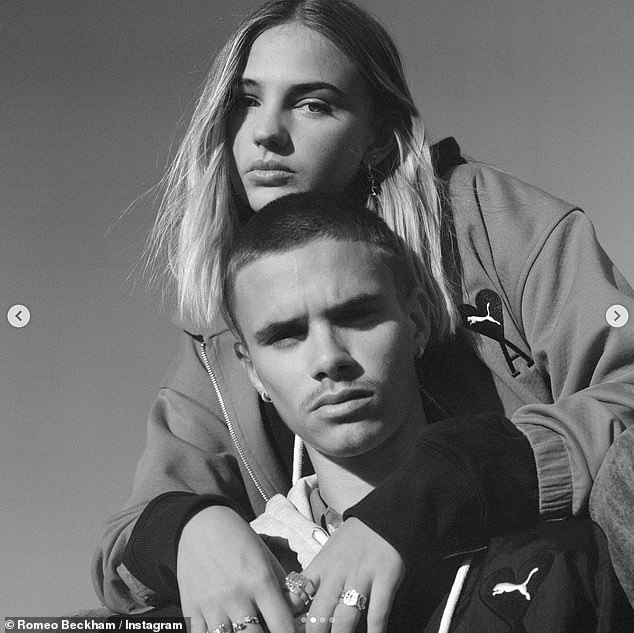 Pushing boundaries: The collaboration is designed to not ‘conform to a specific gender, individual, or appearance’ and challenge ‘current views’

Meanwhile, the pair look cosy in another snap as Mia wears a blue jacket while resting her hand on Romeo’s head.

And in another edgy shot, the couple could be seen sitting in a stark room by a window as light pours in to model the PUMA clothing. 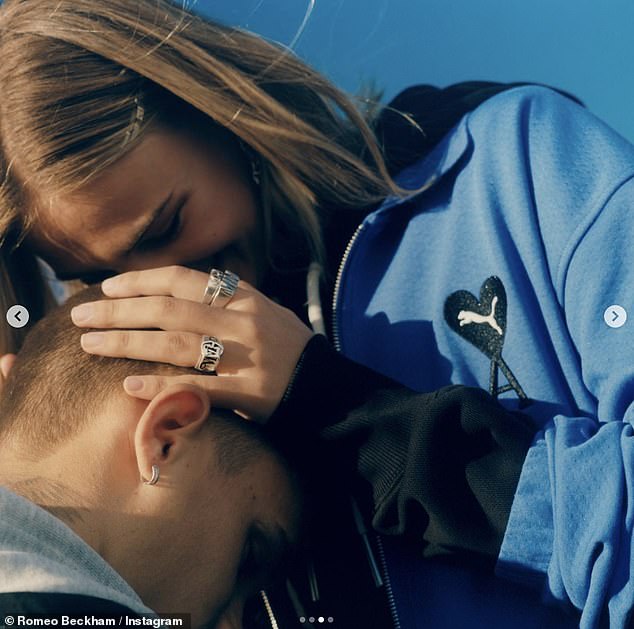 Cashing in: In December, it was announced Romeo, 19, had signed a long-term deal with sports brand PUMA worth a reported £1.2million

Quick to comment was his former Spice Girl mother Victoria, who wrote: ‘So good!! U both look amazing x x x love u x.’

The debut PUMA x AMI wardrobe ‘doesn’t conform to a specific gender, individual, or appearance’, with brand bosses saying the collection ‘challenges our current views, where it isn’t about the accolades of oneself, but about being grateful for the crew that one surrounds themself with, their chosen family’.

Adam Petrick, Global Director of Marketing for PUMA, said: ‘The partnership with AMI was a no-brainer, their name literally means “friend” and that’s what PUMA is all about – a community, a family. 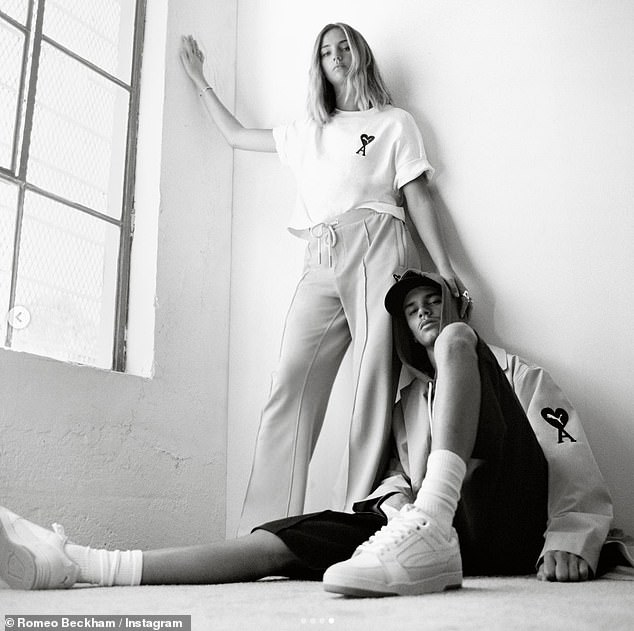 Snapshot: Romeo shared some sultry snaps shot by photographer Eddie Wrey of himself posing with girlfriend Mia on Instagram on Saturday

Proud mum: Quick to comment was his former Spice Girl mother Victoria, 47, who took to the comments section of Romeo’s Instagram post to express her pride

‘We are exceptionally pleased to be able to partner with a creative mind in Alexandre that truly understands the elevation of classic sportswear silhouettes, as well as the creation of community through a positive message.’

The AMI de Coeur, AMI’s signature symbol of a heart over the letter ‘A’, is fused with PUMA’s animal logo for the collection, with Alexandre Mattiussi, Founder and Creative Director of AMI, saying: ‘I’m very proud of the way we mixed the logos together, I think that the result is very impactful and that while this is a gift for us at AMI, it’s a gift for PUMA too.

‘This is something that we share, this is what we call friendship. It is a very honest collaboration, not trying too hard, not pretentious.’ 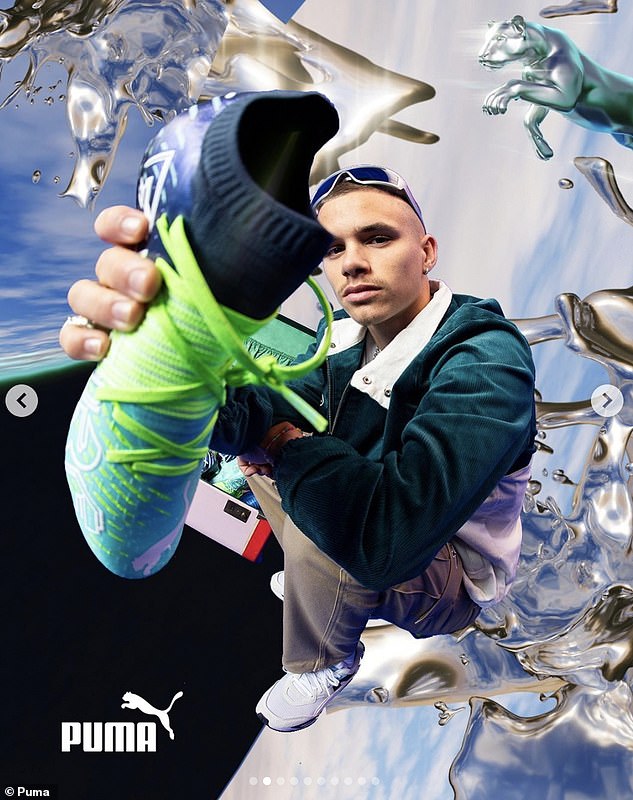 Winning: Romeo’s newly boosted bank balance after his ‘£1.2 million’ PUMA deal has rocketed him to the top of rich list among his siblings Brooklyn, 23, Cruz, 17, and Harper, 10 (pictured in December)

On Romeo and Mia starring in the campaign, photographer Eddie said: ‘What I love the most about them is their energy and their individual style.

‘That and they are clearly in love. Romeo and Mia embody very well the spirit of the collection.’

It comes after Romeo signed a long-term deal with sports brand PUMA in December. 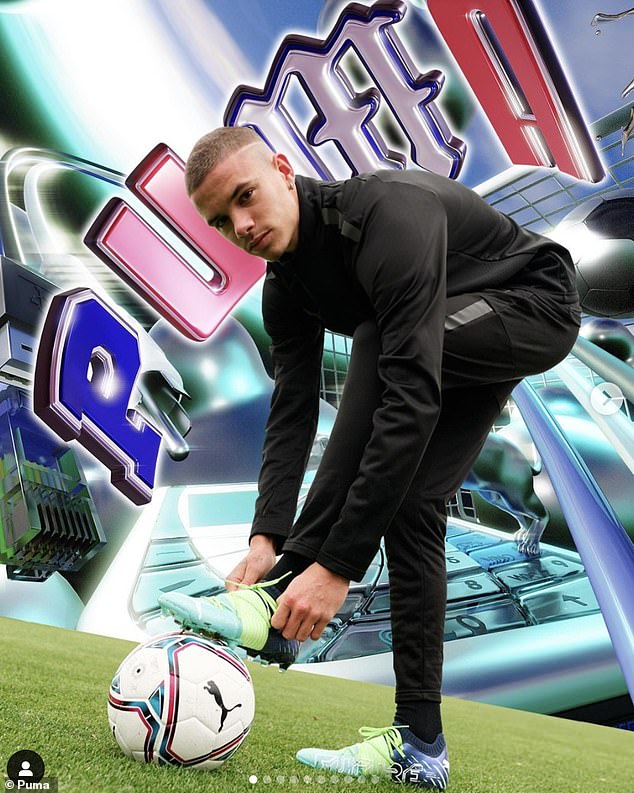 Making waves: A source told The Sun: ‘He’s the richest of the Beckham brood now and like his father is on a fast track to super stardom’ (pictured December)

The reported £1.2million fee rocketed him to the top of rich list among his siblings Brooklyn, 23, Cruz, 17, and Harper, 10.

Romeo’s PUMA signing launched him on a career path similar to his father David’s after the sportsman’s long-standing deal with Adidas.

A source told The Sun: ‘Romeo was paid £1.2million for his deal to become the new global face of Puma. 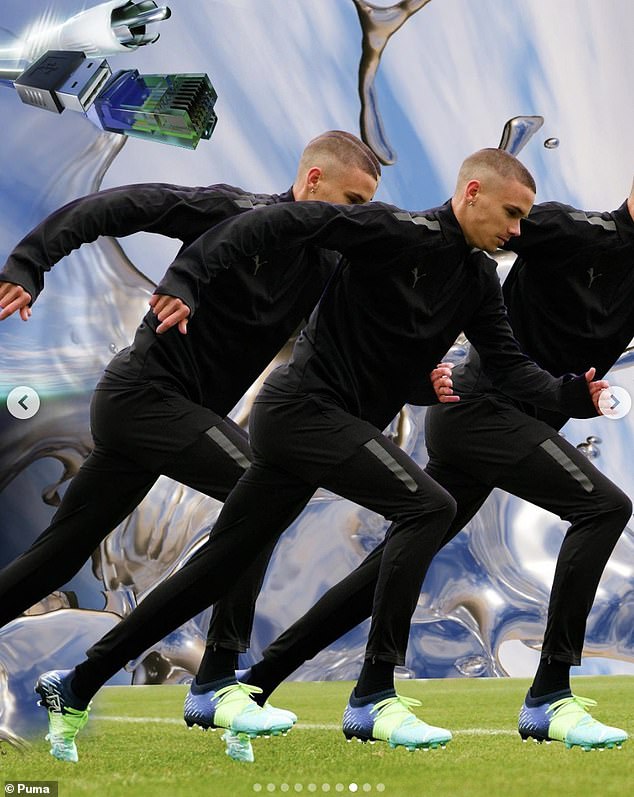 New chapter: PUMA revealed that the footballer will wear their FUTURE Z 1.2 boots when he next takes to the field (pictured December)

‘He’s the richest of the Beckham brood now and like his father is on a fast track to super stardom.’

MailOnline contacted PUMA and a representative for Romeo for comment.

Before securing his new deal, Romeo was estimated to have a net worth of £3.7million, according to All Famous Birthday. It has not been confirmed how Romeo’s latest deal has affected his net worth. 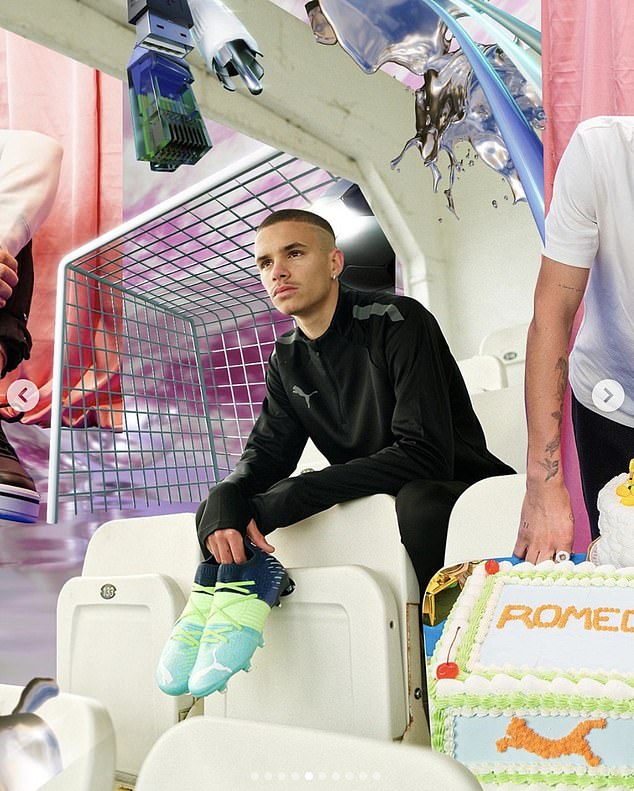 Fashion: The footballer will wear their FUTURE Z 1.2 as they ‘match his game perfectly’ while playing with Fort Lauderdale CF (pictured December) 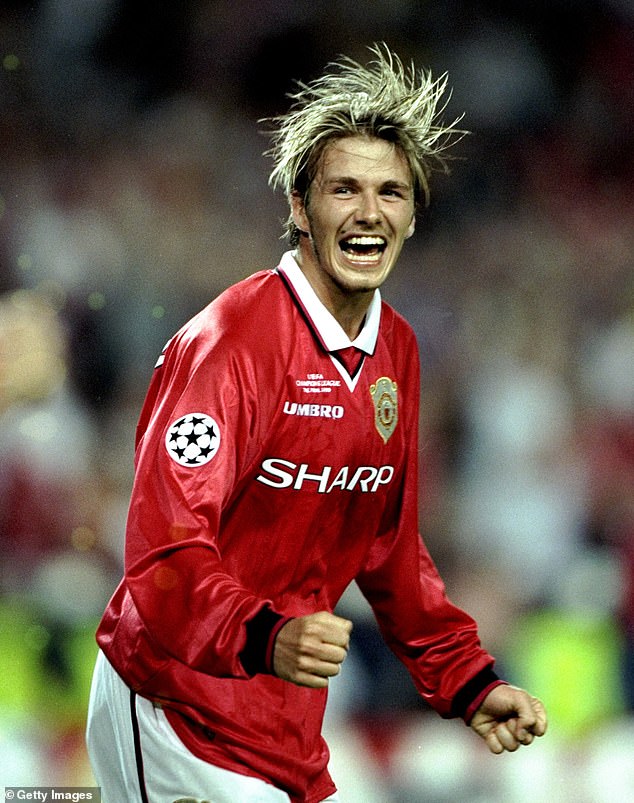 Following in his footsteps: The teenager has been dreaming of becoming a professional football player like his father David Beckham, 46, who signed to Manchester United when he was just 17 (David pictured in 1999)

Romeo’s younger siblings Cruz and Harper individually have an estimated net worth of £1.1million, while his older brother Brooklyn’s net worth is £7.4million, according to online reports.

Romeo already has a passion for football, playing for Fort Lauderdale CF, the reserve team of dad David’s Inter Miami club, which he part-owns.

The source added it is hoped Romeo will work with PUMA for years to come, mirroring David’s collaboration with Adidas, which lasted more than 20 years. 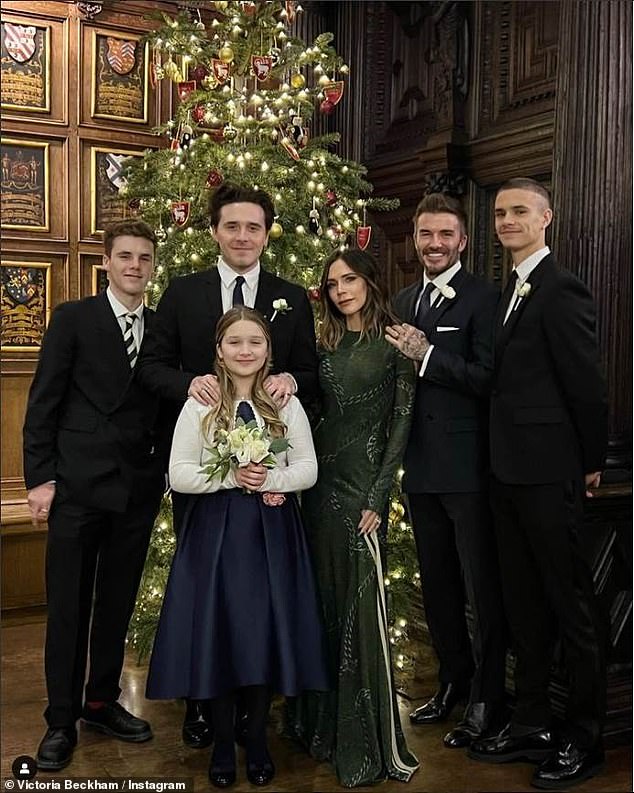 Share
Facebook
Twitter
Pinterest
WhatsApp
Previous articleUkraine's Foreign Minister in joint meeting with Sec. Blinken: We will not accept 'Russian ultimatums'
Next article'Stop getting walked over' Boris urged to 'get tough' with Macron after French election
RELATED ARTICLES
Tv & Show