Childhood vaccinations were a casualty of the spring 2020 lockdowns, a new report from the Centers for Disease Control and Prevention (CDC) finds.

The rate for DtaP shots – including diphtheria and tetanus – fell by 38 percent overall compared to 2018-2019, while the rate for MMR shots – measles, mumps, and rubella – fell by 43 percent.

Though immunization rates rose in the summer of 2020 after lockdown orders lifted, the increase wasn’t enough to catch up the kids who missed their shot earlier in the year.

This lack of catch-up vaccinations ‘might pose a serious public health threat’ because disease outbreaks could threaten school reopenings and other post-COVID recovery efforts, the CDC researchers say. 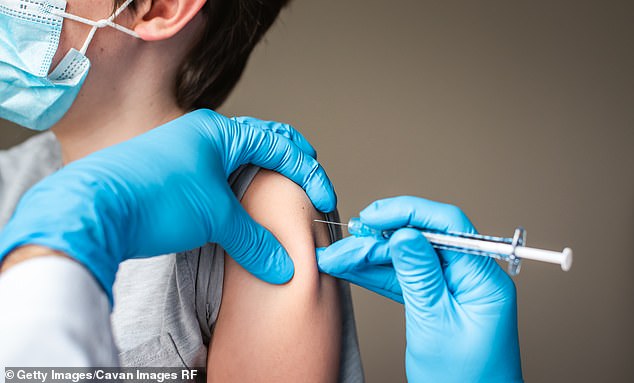 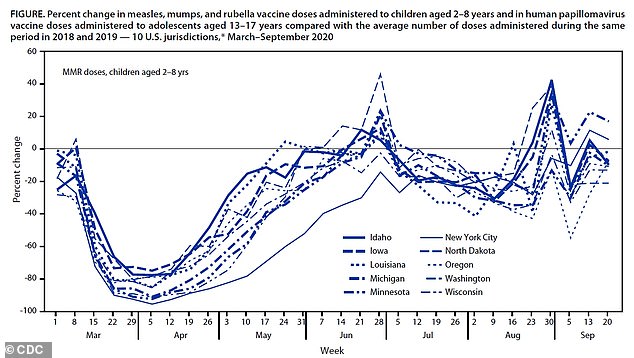 MMR vaccination rates – including measles, mumps, and rubella vaccines – dropped during spring 2020 and did not rise enough to make up for the difference in the summer

The U.D. has made great strides towards reducing infectious disease outbreaks in recent decades thanks to childhood vaccinations.

‘Before the measles vaccine was licensed in 1963, the virus infected at least two million Americans a year,’ Dr Anthony Fauci, the nation’s top infectious disease exprt, wrote in 2019.

This virus caused hundreds of deaths and thousands of hospitalizations each year.

The COVID pandemic threatened progress against measles and other diseases the new report confirms.

While the spring 2020 lockdowns did reduce COVID cases and prevent the healthcare system from becoming overwhelmed, they had consequences for other aspects of U.S. public health. 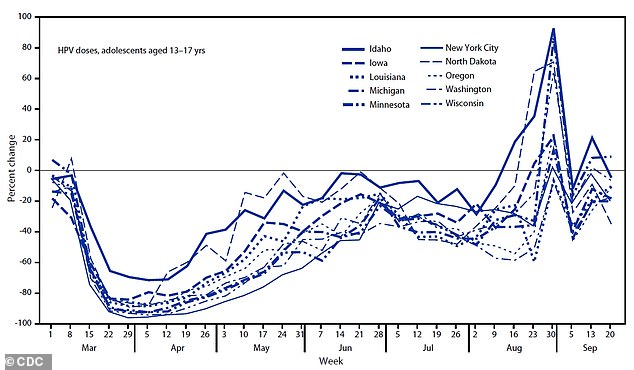 Childhood vaccinations were another casualty of the lockdowns.

All ten jurisdictions had significantly lower vaccination rates from March to May 2020 – when most states had stay-at-home orders in place.

Out of the nine states included in the study, only Iowa and North Dakota didn’t issue stay-at-home orders.

The CDC looked at four categories of childhood vaccinations. 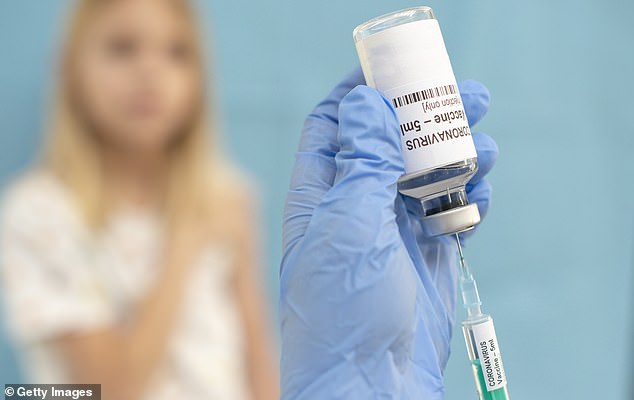 Vaccination rates dropped more for those vaccines administered to older children, like HPV

Vaccination rates dropped even further for those childhood vaccines administered to older children.

The administration rate for the human papillomavirus (HPV) vaccine dropped by 67 percent for children ages nine to 17.

And the rate for the TdaP vaccines – tetanus, diphtheria, and acellular pertussis – fell by 64 percent for children in that same age group.

After stay-at-home orders were lifted in the summer, childhood vaccination rates rose.

Rates for most vaccines approached – or even surpassed – pre-pandemic numbers between June and September 2020.

But the increases weren’t high or sustained enough to catch up those children who missed their vaccinations in the spring.

Many states saw further COVID outbreaks over the summer, and many parents still feared that they would become infected in a doctor’s office or while traveling to an appointment.

Plus, thousands of school districts remained in remote or hybrid learning through the 2020-2021 school year – meaning they may not have enforced immunization requirements. 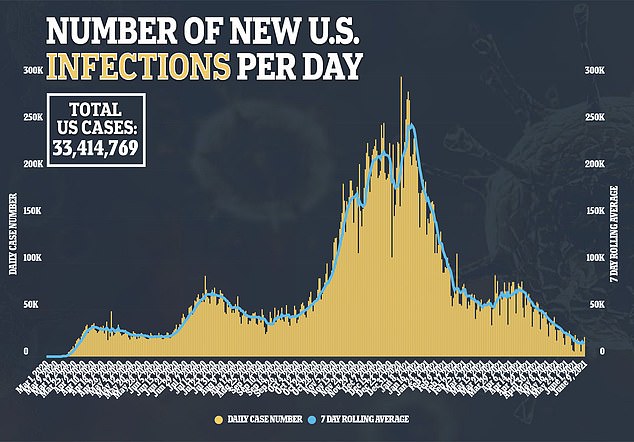 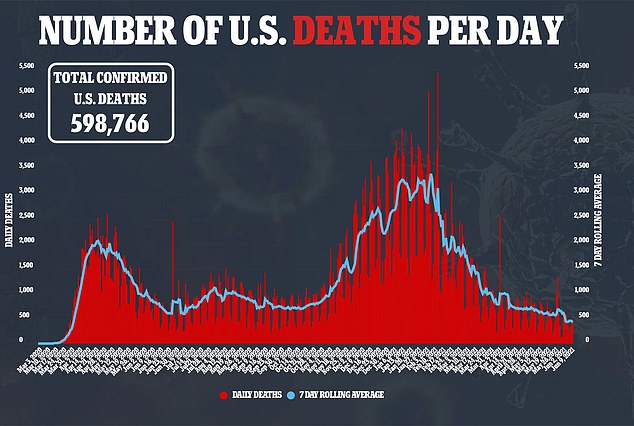 The CDC researchers describe these vaccinations as a ‘critical frontline tool’ against infectious disease outbreaks and that even a temporary decline can compromise herd immunity.

They reference an infamous measles outbreak that hit Rockland County, New York in 2018 and 2019.

Vaccination coverage for the impacted schools was 77 percent – a high number compared to COVID vaccination rates, but far below the 93 percent required for herd immunity against measles.

If children don’t get their vaccinations done soon, schools may face similar outbreaks in the coming school year – the researchers call this a ‘serious public health threat.’

Outbreaks of measles and other diseases could derail reopening efforts, causing further school closures for kids whose communities finally recovered from COVID.

Too early to say if Christian Eriksen will play again after ‘moment of extreme peril,’ says Fabrice Muamba’s doctor

How many subs are in Euro 2020? Everything you need to know

Too early to say if Christian Eriksen will play again after ‘moment of extreme peril,’ says Fabrice Muamba’s doctor