Several senior members of the family are understood to have had reservations about the wisdom of putting Andrew at front and centre of the televised service by giving him the role of escorting his mother from Windsor and into and out of Westminster Abbey.

It came only weeks after the Duke of York paid millions of pounds to Virginia Giuffre to settle out of court a sexual assault civil case in the United States in a scandal that resulted in his being stripped of his remaining royal responsibilities.

Prince Charles and the Duke of Cambridge are among those who are understood to have voiced concerns when the idea was first raised by Andrew.

It went away for a while but then came back at the last minute, according to sources, leaving the family horrified to see the Queen accompanied into the Abbey by her disgraced second son.

In the Order of Service, Andrew was supposed to have entered the Abbey with his daughters Princess Beatrice and Princess Eugenie and their husbands. 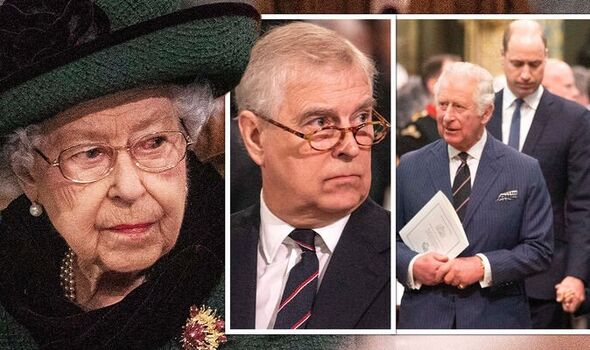 Andrew was supposed to have entered the Abbey with his daughters (Image: GETTY)

But in a late change, he travelled in from Windsor with the Queen, changed cars at Buckingham Palace, and then after arriving with her in a state limousine walked her into the Abbey via a side entrance.

Family members respected the Queen’s decision, knowing she made the tough decisions to suspend her son from all his royal duties in November 2019 and then to strip him of all responsibilities in January this year for the good of the monarchy.

But some felt Andrew should not have put forward the idea.

“It’s a shame that something that was meant to be a celebration of his father has had a shadow cast over it,” one source said last night.

Buckingham Palace declined to discuss the decision but royal sources stressed that it had always been made clear that Andrew would be welcomed at family occasions. They said he had accompanied her because it was a family occasion.

Late change, Andrew travelled in from Windsor with the Queen and changed cars at Buckingham Palace (Image: GETTY)

Another source explained it away as a practical step because both the Queen and Andrew were both being driven in from Windsor. “They were coming from the same place so it made sense,” the source said.

Guests at the Abbey acknowledged it was right that Andrew should be at his father’s memorial service, whatever the scandals surrounding him, but some were astonished to see him given such a prominent role.

They saw it as the clearest signal yet that the Queen is resolutely standing by her son despite the scandal over his friendship with billionaire paedophile Jeffrey Epstein and the resulting court case brought by Ms Giuffre, which ended with Andrew settling without admitting liability.

Critics described the scene yesterday as a slap in the face for victims of sexual assault and sex trafficking.

Ms Giuffre, 38, was one of several women who claimed they were trafficked by Epstein and forced to have sex with his wealthy friends.

“This was her way of quietly showing ‘OK, he messed up really badly, this was a disgrace, but he is (Image: GETTY)

Journalist and broadcaster Benjamin Butterworth wrote: “This shows just how little the royals understand the public revulsion at Prince Andrew. It’s a kick in the face for the victims of sex trafficking to see Andrew ride alongside the head of state like this.”

But several royal commentators suggested the Queen was separating her love for her son at a family occasion on one hand and the interests of the monarchy on the other.

Former BBC Royal Correspondent Jennie Bond said: “This was her way of quietly showing ‘OK, he messed up really badly, this was a disgrace, but he is my son’. “

Another former BBC royal correspondent Peter Hunt said it was a sign of the Queen “endorsing” Andrew, and added: “It didn’t happen by chance.

“He could have sat in the congregation with others, with his relatives, but they actively decided that he would have this role of supporting her.

“So she has chosen, in essence, to remind people that he hasn’t admitted any wrongdoing, he’s not guilty of anything, he’s innocent.

“And she’s very clearly stating that he has a role at family occasions.”

Mr Hunt said: “It’s one thing to accept that he should attend his father’s memorial service, it’s quite another thing to then give him quite a prominent role, so it was an active choice to give him such a prominent role.”

He said he imagined Andrew would have been “very keen” to escort his mother, adding: “It would be for others to dissuade him.”

The former correspondent wondered how the move will be perceived in the United States and elsewhere in the world.

“It’s one thing to organise an event to satisfy the needs and the desires of the family members, it’s quite another to then step back from it and see how it is seen around the world, and I don’t yet know what that judgment will be.

“But the risk for them is it reopens yet again the whole can of worms for them about Prince Andrew’s judgment. It reminds them about his missteps and it raises questions about the wisdom of allowing him to have a prominent role when he could just have attended as everyone else did,” he said.

A source close to Andrew had said this would be his last public appearance (Image: GETTY)

Royal historian Hugo Vickers said Andrew’s role at the service was “entirely correct and appropriate”, describing it as a “nice gesture”.

He said the Queen “needs an arm” and asked: “Who better than her son?”

Mr Vickers said if she took the arm of an official, it would look “rather sad”.

A source close to Andrew had said this would be his last public appearance. But some in the family fear he will also be at the thanksgiving service for the Queen’s 70-year reign at St Paul’s Cathedral on June 3.