Ruby Rose shows off her tattooed and toned stomach

She recently returned to the spotlight with a gig on US TV show Ink Master.

And Ruby Rose appears to be enjoying her return to the limelight as she flashed her abs in selfie posted to Instagram on Friday.

The Orange is the New Black star, 36, showed off her tattooed and toned stomach in the mirror selfie where she sported a sports bra and black harem pants covered in various pictures of NBA star former Dennis Rodman. 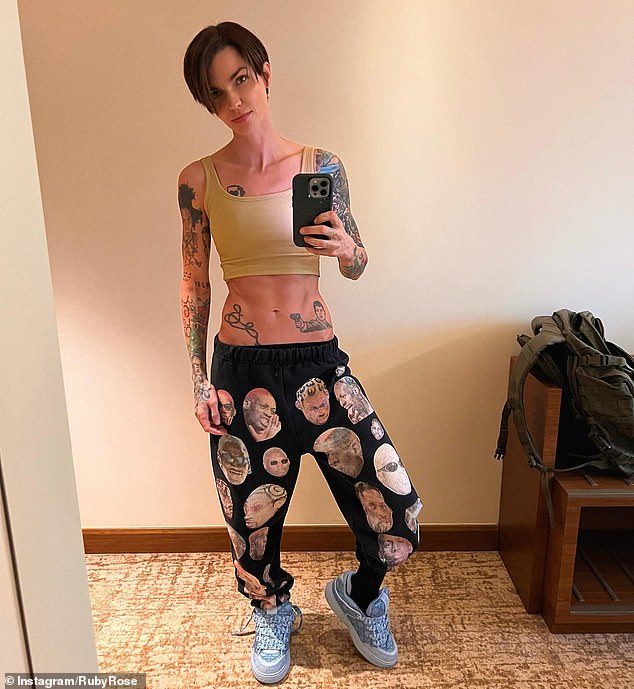 The Chicago Bulls, 61, legend is famed for his bold hairstyles with the pants showing his various looks throughout the years.

Ruby paired the bold outfit with ERL x Dior B9S sneakers which first debuted in their 2023 SS collection. While their not available for general purchase, similar styles  retail for upwards of $1550.

‘Ignore me… It’s about the shoes!’ she wrote in the caption, tagging both Dior and their Artistic Director Kim Jones.

Ruby styled her signature black hair into a short choppy bob and pouted in a lowkey make-up look. 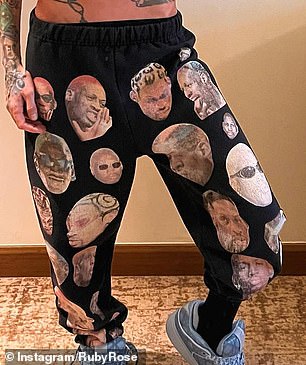 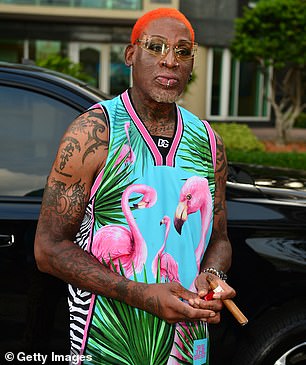 It comes as the actress paid tribute to her former co-star Brad William Henke who died aged 56.

The former NFL star, who is best known for playing Desi Piscatella in the Netflix hit that made Ruby’s name  passed away in his sleep November 28.

‘Life is so sacred and short. RIP beautiful man,’ she wrote alongside a a picture of the star. 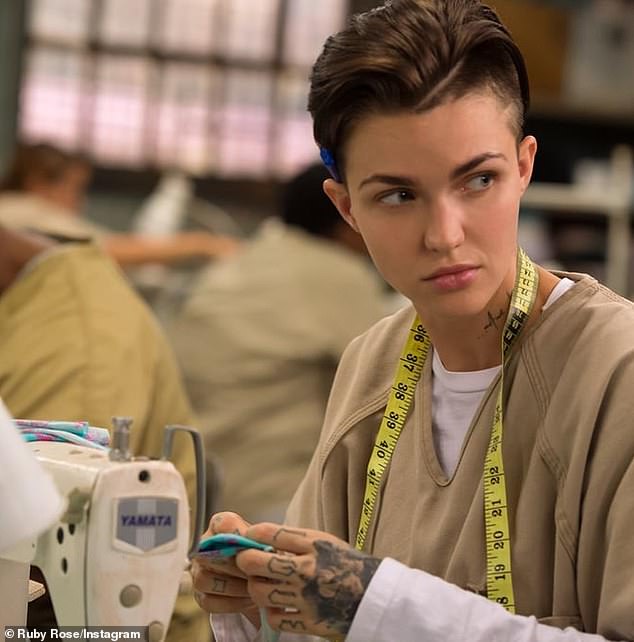 Ruby shot to fame in 2015 with her breakout role in the Netflix series Orange Is the New Black. Pictured on the show

The former model -was once dubbed Hollywood’s most promising new actress, but the Orange Is the New Black star has suffered her fair share of career setbacks in recent years.

The Melbourne native, whose real name is Ruby Rose Langenheim, began her showbiz career as a model, DJ and TV presenter for MTV Australia.

As her popularity grew, she found herself fronting major modelling campaigns for big names including Maybelline, and co-hosting popular shows such as Channel 10’s The Project and Australia’s Next Top Model. 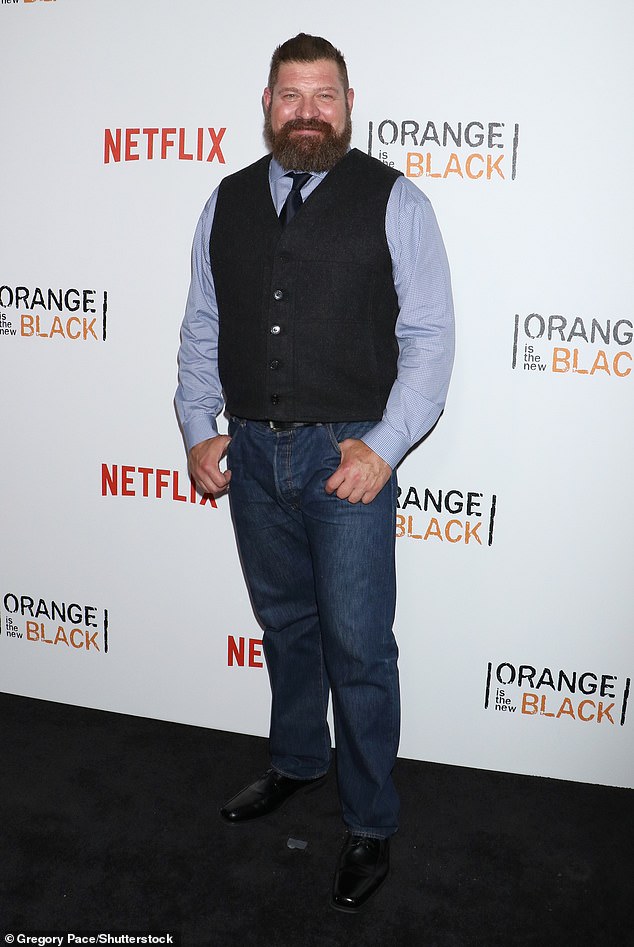 Actor and NFL alum Brad William Henke has died at the age of 56. He was snapped in NYC in June of 2016 ‘Life is so sacred and short. RIP beautiful man,’ Ruby wrote alongside a a picture of the star.

She moved to Hollywood in 2013 with hopes of making it as an actress.

Her efforts paid off, as Ruby shot to fame in 2015 with her breakout role in the Netflix series Orange Is the New Black.

The gender-fluid star’s acting career skyrocketed when she was cast in blockbuster movies such as Resident Evil: The Final Chapter (2016) and Pitch Perfect 3 (2017). 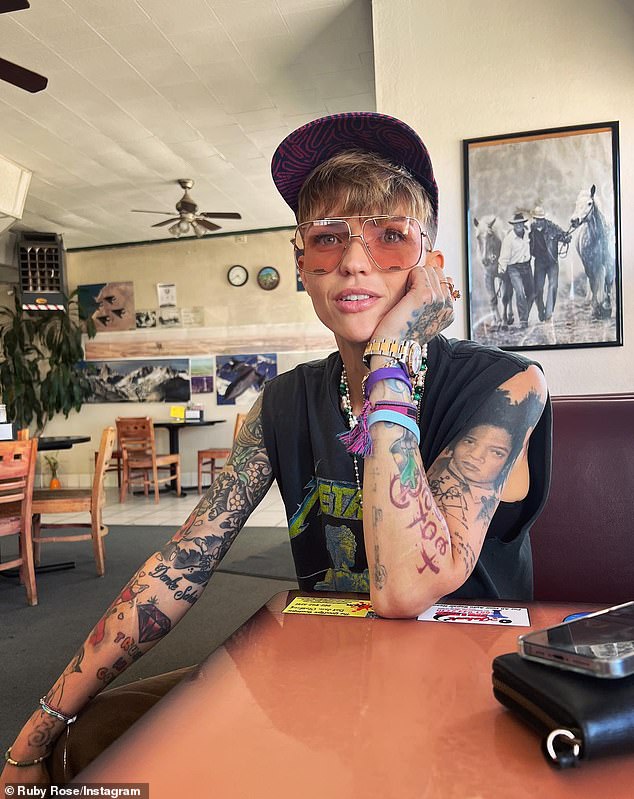 The gender-fluid star’s acting career skyrocketed when she was cast in blockbuster movies such as Resident Evil: The Final Chapter (2016) and Pitch Perfect 3 (2017)

In 2018, Ruby also co-starred with Jason Statham in sci-fi thriller The Meg.

However, her career took a turn for the worse in 2020 when she controversially quit CW superhero series Batwoman after just one season.

Announcing her departure in May 2020, Ruby told The Hollywood Reporter: ‘I have made the very difficult decision to not return to Batwoman next season.

‘This was not a decision I made lightly as I have the utmost respect for the cast, crew and everyone involved with the show in both Vancouver and in Los Angeles.’

Ruby was eventually replaced by British actress Wallis Day on the series.

Ruby took a break from acting in November last year to spend time Down Under with her family, before returning to LA to film her latest two action movies, Vanquish and SAS: Red Notice.

Ruby’s performance in Vanquish was panned, and she was nominated for Worst Actress at the 2022 Golden Raspberry Awards, also known as The Razzies.

She’s recently made a surprising return to the spotlight, landing a new gig on US TV show Ink Master.

The Aussie star is a guest judge on the Paramount+ show which features tattoo artists who compete in various challenges to show of their skills. 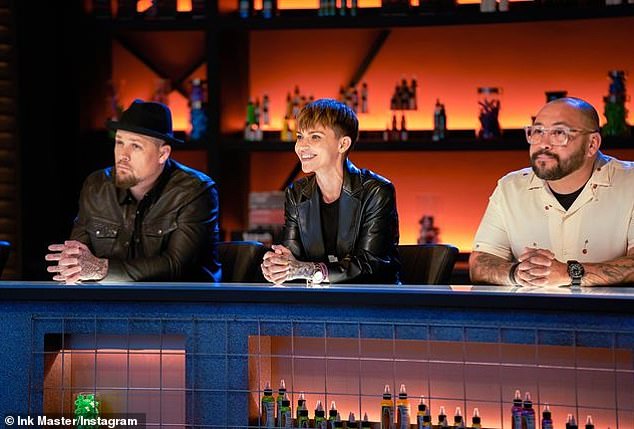 She’s recently made a surprising return to the spotlight, landing a new gig on US TV show Ink Master