RUTH SUNDERLAND: People are proud of their home towns, despite all the problems – that can be turned into a powerful force to reboot Britain

While Westminster was convulsed by the confidence vote in the Prime Minister, a group of business leaders were served a plate of chicken masala 212 miles away at Keighley Asian Women and Children’s Centre.

The food was cooked by women hoping to set up a social enterprise delivering lunchtime curries to nearby firms.

One told how Naz Kazmi, the centre’s chief executive, had helped her regain self-confidence after an abusive marriage. 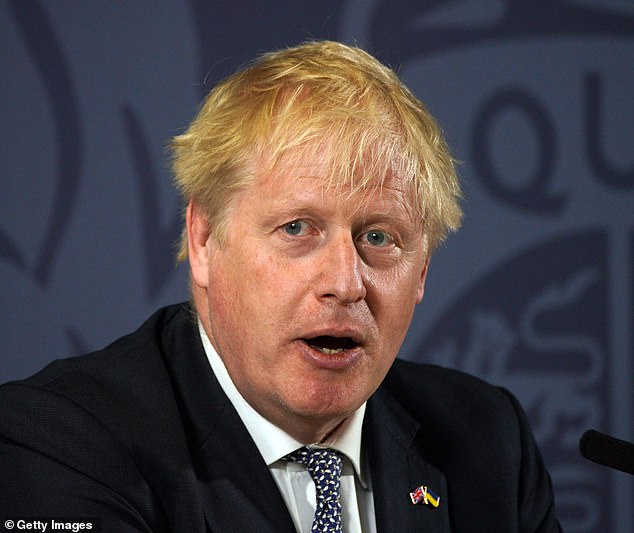 Tough talk: Boris Johnson’s Government has shown enthusiasm for reducing regional inequalities, seasoned with a dollop of self-interest in hanging on to Red Wall voters

Rather than being grim, it was inspiring.

Prince Charles’s Business in the Community network, which organised the visit to Keighley and Bradford, is celebrating its 40th anniversary, and has been engaged in what is now called levelling up all that time.

In Keighley, it is clear that the Government’s flagship policy is sorely needed – and how many people’s lives could be transformed. Boris Johnson’s Government has shown enthusiasm for reducing regional inequalities, seasoned with a dollop of self-interest in hanging on to Red Wall voters.

It is an enormously difficult task. Governments as far back as Harold Wilson’s have tried and failed. Perhaps the difference this time is that we are moving into a digital economy that can in theory thrive anywhere, so the environment might finally be more conducive.

But the gap between London and elsewhere is in reality a gulf. The Institute for Fiscal Studies (IFS) says Preston, the most productive city in the North West, lags behind London by 30 per cent. Sunderland, the top performer in the North East, trails by 20 per cent.

Unlike previous downturns, employment is plentiful around the country – but many of the jobs are low skilled and low paid.

Data from the Office for National Statistics suggest the divide between London and the rest of the country is widening, with output in the capital growing by 1.2 per cent in the first quarter of this year, surpassing all the other regions.

Existing disparities will be made worse by the cost-of-living crisis, which will hit poorer communities hardest.

When the Government’s levelling-up White Paper came out in February, the IFS warned its ambitions were unlikely to be achieved even with large resources and ‘the best politics’, neither of which are in evidence.

Last week, the cross-party Commons public accounts committee found support from the Government’s £4.8billion Levelling-Up Fund had been awarded ‘on the basis of unrealistic claims’ at the expense of more solid propositions. This is not acceptable. Far too much is at stake, and far too many people will be deprived of life chances they deserve. In Bradford and Keighley, as in other towns, there is no shortage of energy, ideas or enterprise. But there is frustration with needless obstacles and box-ticking.

There is frustration, too, at the state of the nation’s transport system. While the capital luxuriates in the new Elizabeth Line, Bradford has the worst rail connections of any major conurbation. The situation has not been helped by the major scaling back of Northern Powerhouse Rail or the dropping of the HS2 Leeds leg.

In less well-off communities with poor public transport where a car is essential to get to work, £100 to fill a tank is ruinous.

Levelling up is about better opportunities for coming generations. Young lives are transformed by good schools, which also benefit local employers looking for recruits.

Firms should be encouraged to follow the example of JCB, which supports its own academy school in Staffordshire, and businessman Christopher Nieper, who has taken over a failing Derbyshire comprehensive.

People are proud of their home towns, despite all the problems. That can be turned into a powerful force to reboot Britain.