Over-50s insurance firm Saga has been forced to cut its profit forecasts as soaring inflation drives up the cost of claims.

The group, which also operates a travel business including cruises, said profits for the year to the end of January next year would be between £20million and £30million, lower than previous forecasts of £35million to £50million.

Saga blamed the spiralling cost of insurance claims, adding that pressure on the market caused by rising prices was ‘anticipated to continue’. 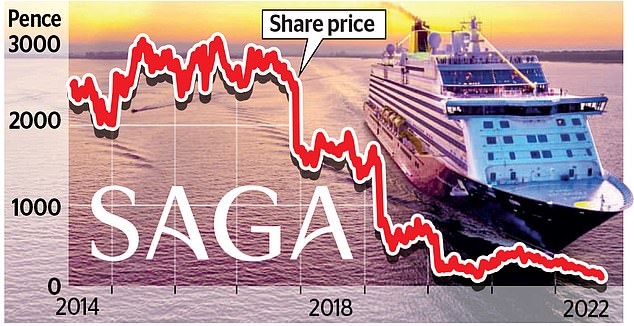 Saga said profits for the year to the end of January next year would be between £20m and £30m, lower than previous forecasts of £35m to £50m

It sent shockwaves through the insurance sector, with shares in Admiral down 2.6 per cent and Legal & General falling 3.7 per cent.

The update overshadowed the firm’s half-year results of a £14m profit in the six months to the end of July, from a £2.8million loss in the same period a year ago.

The figure, ahead of market forecasts, was boosted by Saga’s travel arm, which restarted cruises after Covid curbs were relaxed. Revenues also rose 65 per cent to £258million.

But Saga’s insurance arm performed poorly, with profits from its underwriting business down 47 per cent at £16.4million, which it blamed on factors such as inflation.

Chief executive Euan Sutherland said the firm’s pricing for its insurance products ‘didn’t fully reflect’ the anticipated cost of claims after the inflation surge and the business was continuing to face a ‘challenging market backdrop’.

Analysts were mixed about Saga’s prospects. Russ Mould, of AJ Bell, said it had turned a ‘once-trusted brand into something many people now primarily associate with profit warnings’.

But Charlie Williams, of Hargreaves Lansdown, said that in the long-term the group’s offer to over-50s ‘works well’ as many had already paid off their mortgages.