High street bosses are braced for a string of casualties this Christmas as households battle with rising food and energy bills. Industry experts and store executives have told The Mail on Sunday that chains have been caught between rapidly rising costs and weaker than hoped for demand.

Clothing retailers are said to be particularly exposed to cutbacks after warmer than usual weather meant winter ranges have been left piling up in warehouses.

Veteran retail consultant Richard Hyman said: ‘There are a lot of vulnerable retailers out there – without a doubt. 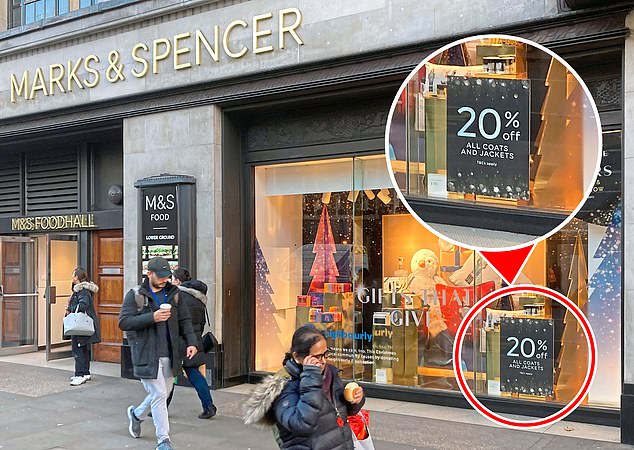 ‘I think there is going to be a lot of excess stock going into the New Year, a lot of discounting and we’ll see some casualties.’

Many shops have enjoyed a bounce-back this year after being forced to close during the pandemic. Shoppers have flocked to town centres and retail parks, giving stores a much-needed lift. But the mood is fragile. Hyman said: ‘People’s capacity to spend is reducing by the month. Something has to give. Traditionally, there’s a lot of money spent on purchases that people don’t necessarily need, particularly clothing.

‘Christmas won’t be cancelled, that’s absolutely certain. But I think it will be an edited-down Christmas. We’re going to see a squeeze.’

Last week, heavily discounted Black Friday events proved to be a damp squib with shopper numbers in the first hours of the day down 22 per cent compared with pre-pandemic levels. One retail executive said: ‘You cannot double household energy bills and add 15 per cent or 20 per cent on to food bills and expect consumers to carry on spending as if nothing has happened. The next few weeks are going to be very unforgiving.’

He added that the rising cost of labour – retail’s biggest cost – as well as energy, raw materials and transport was a ‘perfect storm’ of inflation-driven cost rises. He said the speed of the increases in recent months had been a ‘nightmare’.

According to official forecasts, disposable income is set to fall 4.3 per cent in the year to April 2023.

Bosses are also concerned that rail strikes in the run-up to Christmas could scupper days out, especially trips to big city centres such as London.

The autumn has already ushered in the collapse of clothing chain Joules and online furniture retailer Made.com. City analysts believe that even high street stalwarts are feeling the pinch.

Tony Shiret, at broker Panmure, said he has slashed his buy rating on the clothing sector, including Next.

He said a 20 per cent sale on all coats and boots at Marks & Spencer – just as cooler weather arrived – was evidence that demand for winter clothing had been lacklustre. The sale was launched at an ‘inopportune time’ for the retailer just as more seasonal weather arrived in the past fortnight.

He said it suggests levels of unsold stock in the business ‘have become critical’ and the chain needed to sell large quantities at a reduced price.

The Met Office said average temperatures in October were almost 2C above the long-term average. The highest recorded during the month was 22.9C at Kew Gardens on October 29. The mild weather continued into November. In a report sent to investors on fashion retailers, Shiret said; ‘Our information is that [clothing] distribution centres are full.’ Online retailers Boohoo and Asos have already shown signs of weakening demand.

A growing number of shops are having trouble with their trade credit insurance – cover given to their suppliers. Withdrawal of cover can be an indication that finances are under strain.

Earlier this month, it was reported that both Boohoo and Asos have had their trade insurance cut back by Allianz Trade.

Allianz has also cut its cover for suppliers to Wilko – the 400-store hardware business formerly known as Wilkinsons.

Last week, it emerged that Wilko was in talks over a £30million emergency loan and has drafted in advisers from Teneo to help it patch up its finances.

One retail director added that value chains operating in town centres, including the likes of New Look and Matalan, were more vulnerable to a squeeze than others.

He said he expected Primark to be the exception.

‘If you ask me which ones I think will do well through all this, I would say Primark, Aldi, Lidl and probably Next,’ he said.

Other supermarkets, including Tesco, are expected to be better insulated from cutbacks, despite growing evidence shoppers are being more careful – replacing branded goods with retailers’ own label ranges, for example.

Christmas celebrations have been disrupted by two years of Covid restrictions.

Hyman said: ‘I think people still want to entertain this Christmas. They are certainly not going to cancel that even though they may spend more cannily.’