Sally had a breast reduction free on the NHS..so why did daughter Ellie have to pay £6,000 for hers?

Life-changing — that is how Ellie Knight describes her recent breast reduction operation, but not just because of the difference it made to her appearance.

For Ellie, 35, a midwife from Elgin, Moray, the main reason for the surgery to take her down seven cup sizes, from a 36J to a 34E, was to end the neck and shoulder pain she’d had for years.

‘Sometimes the neck pain was so bad that I needed painkillers,’ says Ellie, who has two children, aged nine and six, and is married to Stuart, 35, an engineer.

There was also the damaging effect on her self-confidence. ‘It wasn’t just boys teasing me and men looking at me,’ she says.

‘I would have girls coming up to me in the loos when I was out, saying they were the biggest boobs they had ever seen. I felt really self-conscious.’ 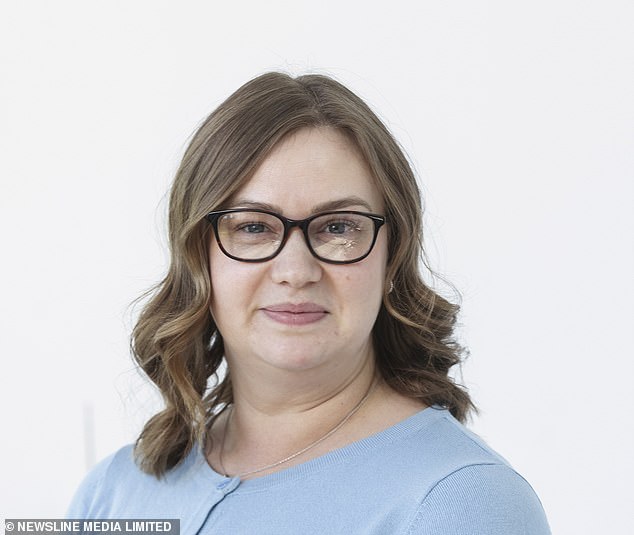 For Ellie, 35, a midwife from Elgin, Moray, the main reason for the surgery to take her down seven cup sizes, from a 36J to a 34E, was to end the neck and shoulder pain she’d had for years

At the age of 18, she was accepted for breast reduction surgery on the NHS. But while on the waiting list, the criteria changed so that it was only available to those with a maximum BMI of 28. At 5ft 6in tall, Ellie’s was 30, which meant she needed to lose weight to qualify.

‘But that is really difficult when you cannot exercise because of the size of your breasts — which weigh so much themselves,’ she says.

It’s a problem that Ellie’s mother, Sally Collie, 63, who wears a 32DD bra, once shared, describing years of backache and neck and shoulder issues.

‘If I was really sore, I just had to take analgesics,’ she says. ‘The best time was at night, when I was lying down and could take my bra off to relieve the pressure on my shoulders.’

However, Sally (also a midwife living in Elgin) did qualify for an NHS breast reduction and had the operation four years ago.

Ellie would still be living with the pain and embarrassment had her husband not been given a work bonus last July. He paid £6,100 for her to have the surgery privately.

Ellie says: ‘It’s only been six months since the operation, but it’s opened up a world of things I can now do, such as jumping around with my six-year-old son William, which was too painful before.’

The mother and daughter are among a growing number of women having breast reductions, while the number having breast augmentation surgery has declined, according to the British Association of Aesthetic Plastic Surgeons (BAAPS).

In 2020, there were 4,700 breast augmentations and 3,100 reductions carried out privately. Ten years ago, the number of women having surgery to increase their breast size was more than double those having breast reductions (10,000 compared to 4,217). 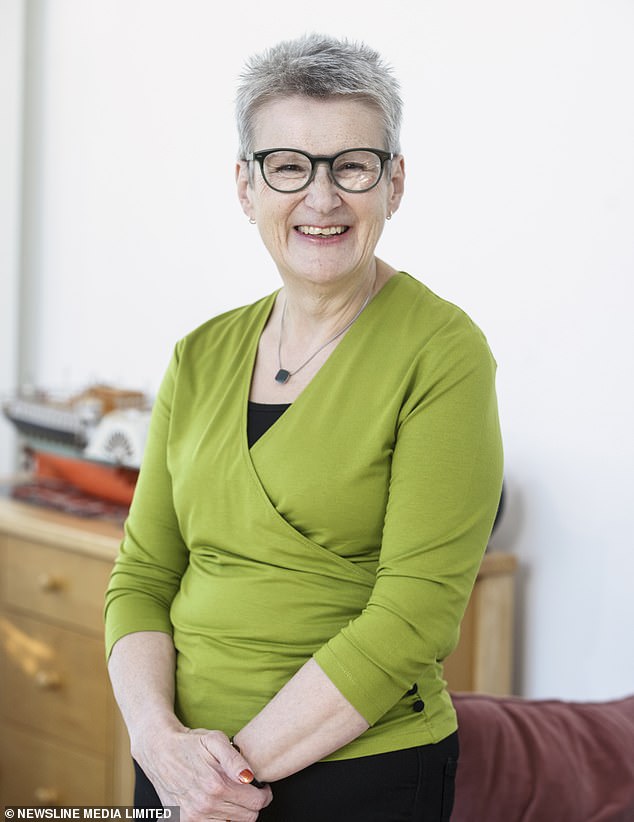 It’s a problem that Ellie’s mother, Sally Collie, 63, who wears a 32DD bra, once shared, describing years of backache and neck and shoulder issues. ‘If I was really sore, I just had to take analgesics,’ she says. ‘The best time was at night, when I was lying down and could take my bra off to relieve the pressure on my shoulders’

The specialist who performed Ellie’s operation, Lucy Khan, a consultant oncoplastic breast surgeon at Forth Valley NHS Hospital, Fife, and Kings Park Hospital, Stirling, says that ‘for every breast augmentation I do these days, I perform two or three reductions’.

The popularity of reductions is thought to be linked partly to the recent drive to stay fit and wear exercise gear — large breasts get in the way of that.

‘Many women now say, “I don’t want to double-bra when I exercise,” ’ says Caroline Payne, a plastic surgeon who works in the NHS and privately in London, and who is a BAAPS council member.

Lucy Khan adds: ‘These are women of all ages who usually want the surgery so they can lead pain-free and healthy lives.

‘J-cup breasts cause real difficulties. The issues are physical — sore neck, back and shoulders — and the women are unable to lose weight as they can’t go running or to the gym.

‘Mental issues include being unable to find clothes that fit, effects on personal relationships, low self-esteem and unwanted attention from men.

‘Can you imagine if you already hated the way your breasts looked and you had people shouting and whistling at you in the street? It’s awful for these women.’

The research backs this up. A study published in the journal Women’s Health in 2020, involving 269 women aged 40 to 85 and with cup sizes ranging from A to HH, found that ‘larger breast sizes have a small but significant negative relationship with breast-related physical wellbeing, body and breast satisfaction.

‘Larger breasts are associated with a greater likelihood of upper-back pain.’

The authors, from Curtin University, Perth, in Australia, added: ‘Clinicians considering ways to improve the health and psychological wellbeing of mature-aged women should be aware of these relationships.’

Other research has produced similar findings. A study in the BMJ in 2020, of more than 200 women who had breast reduction surgery, found that it ‘significantly improved quality of life’ and that ‘the improvement in quality of life is comparable to other widely accepted surgical procedures’.

In order to qualify for breast reduction surgery on the NHS, women must show a medical need for it — such as backache, shoulder or neck pain, rashes and skin infections — or that they are experiencing psychological distress, such as low self-esteem or depression. Some trusts apply a maximum BMI limit, as in Ellie’s case. The criteria can vary around the country, with some areas not offering the procedure at all.

Ms Khan says her NHS breast reduction surgery is usually restricted to cancer patients (who might have one larger breast after surgery on the other) or women who’ve been allocated exceptional funding because of conditions such as gross asymmetry, where one breast is a very different size, or severe psychological issues.

She says there is ‘a postcode lottery, with many patients often having to fundraise to pay for their own treatment’.

While surgeons agree that the operation can have major benefits, some say there just isn’t the capacity in the stretched NHS to do this kind of surgery.

‘I think it’s a false hope for any woman to think she will get this on the NHS in the immediate future,’ says Mr Chris Cartlidge, an NHS breast surgeon in Scotland.

‘I see a lot of women who are very deserving — having large breasts has such a major impact on their health — and I would love to be able to do lots of breast reduction surgery, but not if it means I can’t do as many operations for my cancer patients.

‘The criteria to have such surgery on the NHS often means having a BMI below 28, but heavy breasts can weigh several kilograms, making it extremely difficult for women to lose enough weight.’

Breast reduction is major surgery, involving a general anaesthetic, an overnight stay in hospital and up to six weeks’ recovery.

The operation involves first lifting the nipple, while keeping it attached to blood vessels on a ‘stalk’ of tissue, then removing excess skin and breast tissue. The remaining tissue is reshaped and the nipple put in place.

Women over 40 have a mammogram before the operation to ensure no cancer is present.

As with all surgery, there are potential risks. In 5 per cent of cases, bleeding may occur from blood vessels in the breast. There is also an infection risk, and in less than 1 per cent of cases the nipple will die and have to be removed.

Although the milk ducts are retained, scarring can cause problems for breastfeeding in the future, and women are warned that pregnancy, weight gain and ageing can lead to a return of larger and droopy breasts.

Ellie says she was fully aware of the risks, but adds: ‘My husband was worried about the surgery but he has seen how much it has meant to my self-esteem, and it is such a relief to be free of pain.

‘I just wish that I had been able to do this years ago.’

Sally first joined the NHS waiting list in 2002, but was told after a few years that changes to the criteria meant she was no longer eligible because her BMI was too high.

Ellie’s wedding in 2011 provided the impetus to lose 6 st in weight, and Sally dropped from a size 20 to a size 10. In 2016 she went back on the NHS list, and two years later, in September 2018, was called to go to Aberdeen hospital the next day for the surgery. She says the operation changed every facet of her life.

‘Mentally I feel so much better about myself now,’ says Sally. ‘It is great no longer to have any pain at all. And obviously, it is a lot easier to be a midwife without my breasts getting in the way.’

Ellie adds: ‘My body image is so much more positive. I will take up a high-impact sport now, but I feel comfortable within myself — and that’s amazing.’

The main ingredient of aspirin is a manufactured version of salicin, a bitter compound originally derived from the bark of willow trees which has long been used to treat fevers, aches and pains. Its first known use was recorded on an ancient tablet from around 3000 BC.

Salicin is also found in meadowsweet, a plant that grows in the UK and was mentioned in Chaucer’s The Canterbury Tales as an ingredient in a herbal drink. However, it wasn’t until 1763 that salicin’s ability to treat fever was identified, when an English clergyman, the Revd Edward Stone, created a tea made from willow bark.

‘At the time, bark from the cinchona tree [found in South America] was used to treat fevers,’ says Claire Anderson. ‘But Stone, realising that the willow tea tasted bitter like cinchona, believed it must work in the same way — and carried out tests to prove it.’

German chemists replicated salicin in a lab, and in 1899 aspirin was registered as a medication by pharmaceutical company Bayer. As Claire Anderson explains, we now know that non-steroidal anti-inflammatory drugs such as aspirin ‘block the production of prostaglandins — fats that act like hormones and regulate processes such as pain and inflammation’.

The US birth rate increased for the first time in seven years in 2021, even as teen pregnancy fell