Samantha Womack revealed that she is set to undergo her first chemotherapy session on Thursday as she shared a health update with her fans.

The former EastEnders actress, 49, took to Instagram to thank her 87.6k followers for their support following her breast cancer diagnosis.

Her health revelation came back in August, when the soap star shared a tribute to the late Olivia Newton-John, who passed away from breast cancer. 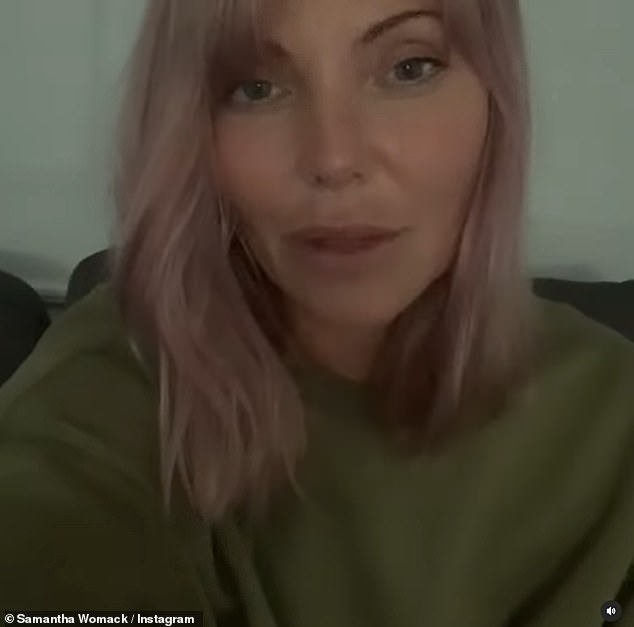 ‘I’m feeling very humbled’: Samantha Womack has thanked fans for their support as she shared a breast cancer update to Instagram on Thursday, ahead of her first chemotherapy session

Appearing natural for the low-lit video, Samantha donned a khaki jumper as she explained she has had an operation.

She underwent a lumpectomy, which aims to remove cancer or abnormal tissue from the breast, and a lymp node removal – which can help check if cancer has spread, or reduce the chance of it returning.

Chatting to the camera, the actress, who famously played Ronnie Mitchell in EastEnders, explained: ‘Hey, I just want to say thankyou to everyone who has been sending me love after I shared my story about battling breast cancer. 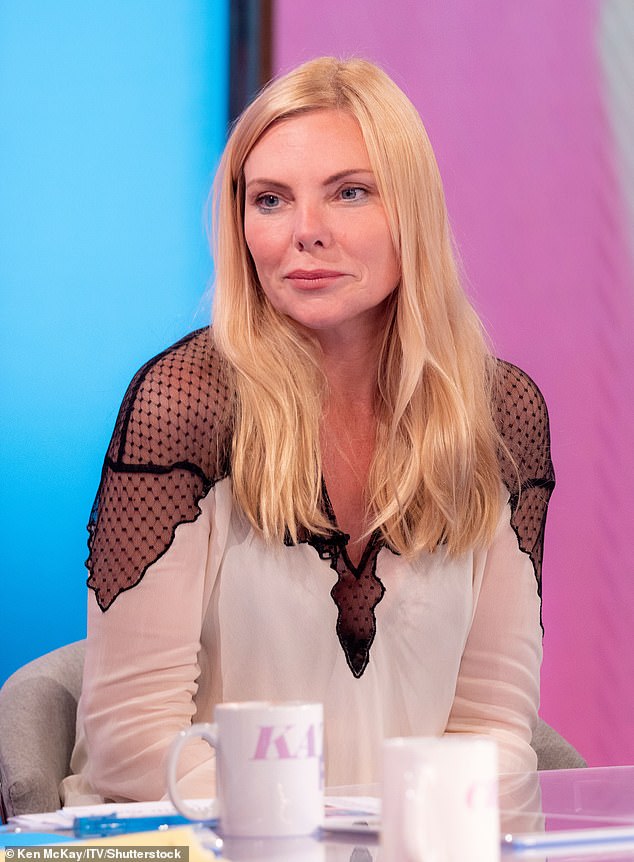 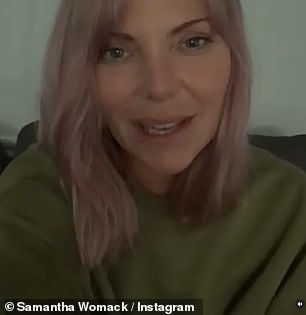 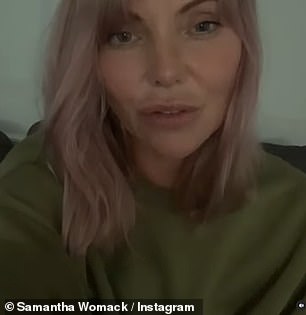 Insight: Appearing natural for the low-lit video, Samantha donned a khaki jumper as she explained she has had an operation

‘So, just to tell you, I’ve had my operation, I had a lumpectomy and lymph node removal and I am now going to start my first session of chemotherapy tomorrow.’

She gratefully concluding: ‘I have read all your stories and messages, they’ve blown me away, genuinely. I just wanted to say thank you, I am very humbled by the fact that everyone has reached out and yea so, I’ll keep you posted.

‘Just a huge thank you, sending you all lots of love.’

In addition to her fans, famous friends rushed to the comments to extend their words of love and support. 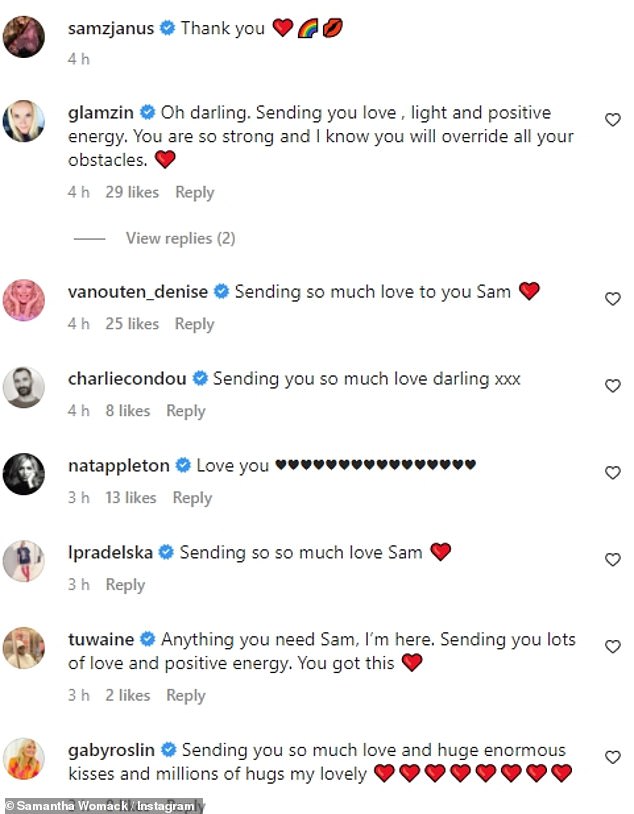 Supportive: In addition to her fans, famous friends rushed to the comments to extend their words of love and support

‘Sending so much love to you Sam,’ penned close pal Denise Van Outen.

While Tamzin Outhwaite wrote: ‘Oh darling. Sending you love , light and positive energy. You are so strong and I know you will override all your obstacles.’

On August 9 Samantha revealed she had been diagnosed with breast cancer.

The soap star announced that she she’d ‘started her own battle’ with the disease as she paid tribute to Grease star Olivia.

In a tribute to the late actress, she tweeted a picture of the pair with Olivia’s daughter Chloe, taken when Samantha had played Sandy in the 1993 West End production of Grease.

Samantha captioned the image: ‘This was the most magical of evenings. Olivia and Chloe had come to see Grease in London and we had dinner together afterwards.

‘I was so excited and in awe, she was my childhood. I now start my own battle with this disease and am left feeling deeply moved. #OliviaNewtonJohn.’ 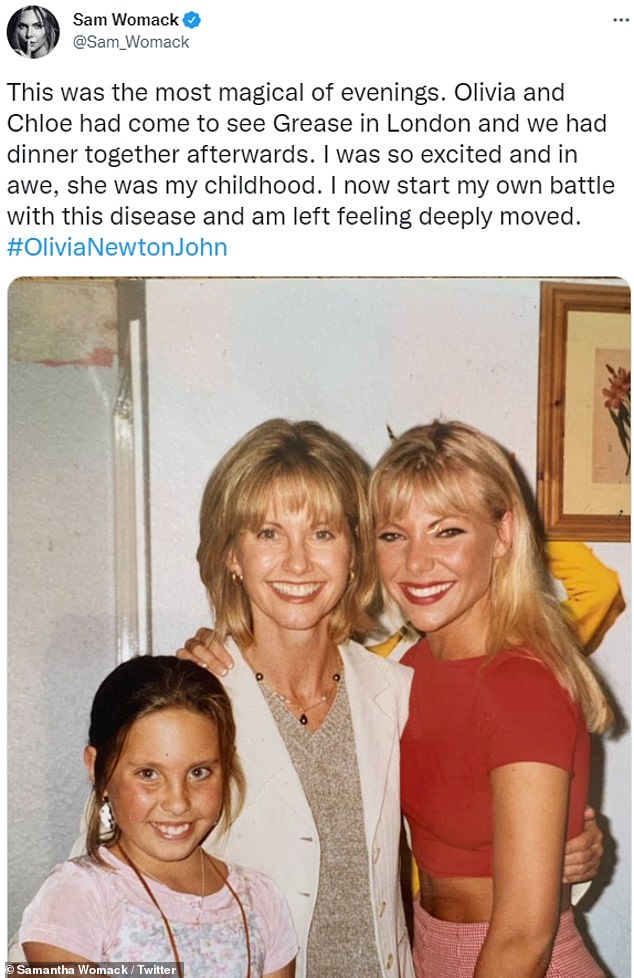 Difficult: Last month Samantha announced that she she’d ‘started her own battle’ with the disease as she paid tribute to Olivia Newton-John, who died aged 73 after long fight with cancer

Samantha is currently starring as the White Witch in The Lion, The Witch And The Wardrobe, which opened to rave reviews at the Gillian Lynne Theatre in the West End last month, and is running until January.

Samantha has two children, Lili and Benji, with former husband Mark Womack, who appears in Emmerdale. They split up four years ago, but have carried on living together.

For the past two years she has been dating actor Oliver Farnworth, 40, and the three of them now form a ‘blended parenting unit’ — dividing their time between homes in Bedfordshire and Liverpool.

The Macmillan Support Line offers free, confidential support to people living with cancer and their loved ones. Call 0808 808 00 00 for support.

What is breast cancer?

Breast cancer develops from a cancerous cell which develops in the lining of a duct or lobule in one of the breasts.

When the breast cancer has spread into surrounding breast tissue it is called an ‘invasive’ breast cancer. Some people are diagnosed with ‘carcinoma in situ’, where no cancer cells have grown beyond the duct or lobule.

Most cases develop in women over the age of 50 but younger women are sometimes affected. Breast cancer can develop in men though this is rare.

Staging means how big the cancer is and whether it has spread. Stage 1 is the earliest stage and stage 4 means the cancer has spread to another part of the body.

The cancerous cells are graded from low, which means a slow growth, to high, which is fast growing. High grade cancers are more likely to come back after they have first been treated.

A cancerous tumour starts from one abnormal cell. The exact reason why a cell becomes cancerous is unclear. It is thought that something damages or alters certain genes in the cell. This makes the cell abnormal and multiply ‘out of control’.

Although breast cancer can develop for no apparent reason, there are some risk factors that can increase the chance of developing breast cancer, such as genetics.

What are the symptoms of breast cancer?

The usual first symptom is a painless lump in the breast, although most breast lumps are not cancerous and are fluid filled cysts, which are benign.

The first place that breast cancer usually spreads to is the lymph nodes in the armpit. If this occurs you will develop a swelling or lump in an armpit.

How is breast cancer diagnosed?

If you are confirmed to have breast cancer, further tests may be needed to assess if it has spread. For example, blood tests, an ultrasound scan of the liver or a chest x-ray.

How is breast cancer treated?

Treatment options which may be considered include surgery, chemotherapy, radiotherapy and hormone treatment. Often a combination of two or more of these treatments are used.

How successful is treatment?

The outlook is best in those who are diagnosed when the cancer is still small, and has not spread. Surgical removal of a tumour in an early stage may then give a good chance of cure.

The routine mammography offered to women between the ages of 50 and 70 mean more breast cancers are being diagnosed and treated at an early stage.