The future of British chip maker Arm has been thrown further into doubt as its Japanese owner jets off to South Korea for talks with Samsung.

Masayoshi Son, the chief executive of Arm parent SoftBank, will discuss a ‘strategic alliance’ with Samsung for the UK tech giant.

The move has raised fears Arm’s blockbuster stock market float could be ‘put on ice’. 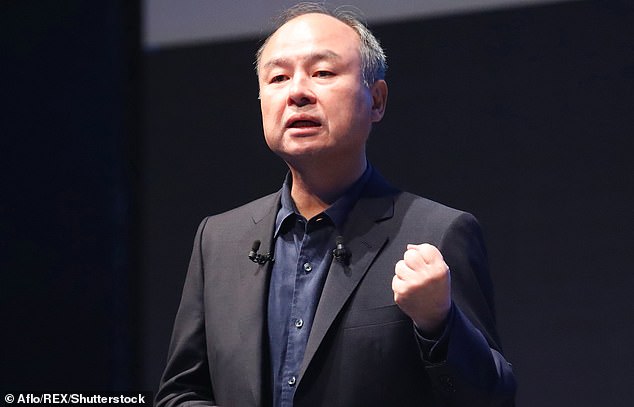 Alliance: Masayoshi Son, the chief executive of Arm parent Softbank, will fly to Seoul next week to discuss a ‘strategic alliance’ with Samsung for the UK tech giant Arm

According to sources, Son wants to see if Samsung would take a stake in Arm as he has cooled on listing it in New York or London before March.

Son said: ‘I’m looking forward to visiting Korea for the first time in three years. I’d like to talk with Samsung about a strategic alliance with Arm.’

A Samsung executive replied: ‘A strategic alliance is a vague and broad term. If he offers to sell Arm to us, we will have to consider it.’

Son has been exploring listing Arm in New York – and possibly London – but is concerned about the global downturn. A slump in tech stocks on the Nasdaq in New York has cast doubt over Arm’s mooted £40billion valuation.

A stake sale to Samsung would give Arm a much-needed valuation ahead of a second attempt to float in 18 months to two years’ time.

Arm was sold to SoftBank for £24billion in 2016. A proposed £31billion sale to Nvidia fell through last year because of regulatory hurdles.

Following the Nvidia setback, Son switched his focus to an initial public offering for Arm in the US, a move that triggered intense lobbying from the UK government to ensure that some portion of the listing takes place in London.

Russ Shaw, at Tech London Advocates, said: ‘It is questionable whether a float at present would bring in the value Son is looking for.

‘His other option is to bring in an investor like Samsung, obtain a pre-float valuation and come back to the markets when conditions have improved. Timing is everything.’

A source close to Arm said: ‘The float looks like it’s on ice.’ The Samsung meeting comes as Prime Minister Liz Truss and Chancellor Kwasi Kwarteng are reportedly set for talks with SoftBank bosses.

Former prime minister Boris Johnson lobbied SoftBank to list Arm in London but SoftBank halted talks due to the changes in government. Andrew Griffith, financial secretary to the Treasury, is said to be aiding renewed efforts.