SARAH VINE's My TV Week: Was Diana really killed? I was gripped by this inquiry

This week marks 25 years since the death of Princess Diana. Had she survived that crash in the Pont de l’Alma tunnel in Paris, things might be very different for the Royal Family: Prince Charles might never have re-married, Camilla might not be our future queen, Harry might never have moved to America.

Whatever else may or may not be true about the circumstances of her death, it changed the course of history.

In common with other great icons of the 20th century – Marilyn Monroe, Elvis Presley, Jackie Kennedy – her death only seemed to make her more famous.

The world struggled to believe that such a beautiful, vibrant life force could be extinguished in such a banal way, the victim of a traffic accident. Surely there had to be more to it than that. 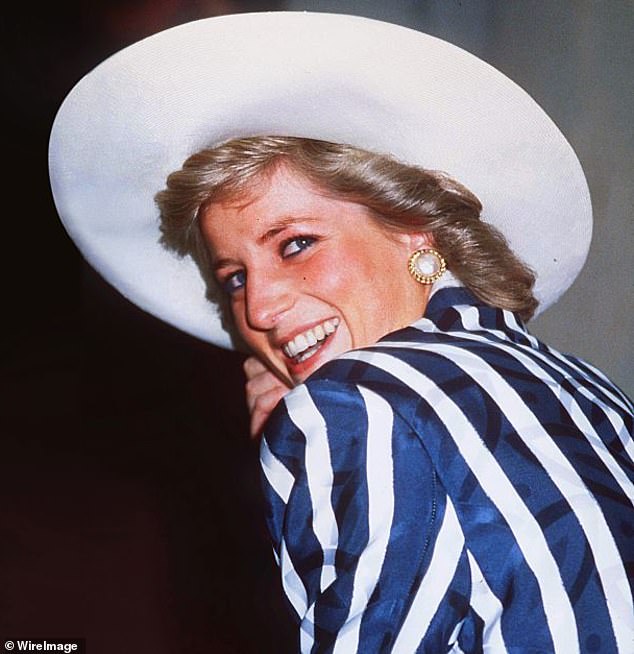 Diana herself fuelled such speculation from beyond the grave. In a note written ten months before she died, she expressed her fear that Charles was ‘planning an accident’ in her car that would result in ‘brake failure’ and ‘serious head injury’.

The motive? ‘To make the path clear for him to marry Tiggy’.

Of course, we now know that the alleged affair with ‘Tiggy’ – Alexandra Legge-Bourke – was a fiction, part of the poison dripped into her ear by the BBC’s Martin Bashir. 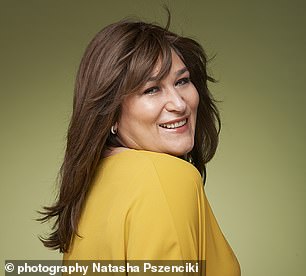 Sarah (pictured) says that she was gripped from start to finish, particularly by the testimony of Lord Stevens himself and the other offices, both British and French

Of all the factors that led to her unhappiness, his contribution is perhaps the most despicable, a deliberate and ultimately catastrophic attempt to exploit her fragility. But really, it’s just the tip of the conspiracy iceberg.

This documentary delves deep beneath the surface of the speculation, focusing on the British inquiry, Operation Paget, led by Lord Stevens.

She herself fuelled the speculation from beyond the grave

Launched in 2004, Paget re-examined all the evidence gathered by the French authorities in the aftermath of the crash, as well as allegations from various individuals – most notably Dodi Fayed’s father, Mohamed AlFayed, who claimed that Diana was pregnant by his son – that the accident had been engineered by the British Secret Service under orders from the Royal Family.

I must confess, I was gripped from start to finish, particularly by the testimony of Lord Stevens himself (not least the information that Al-Fayed made him a gift of some Viagra and a pair of bull’s testicles) and the other officers – both British and French – interviewed.

As I watched I veered between thinking that the whole notion of a plot was beyond absurd to wondering whether, actually, something fishy might have been going on. 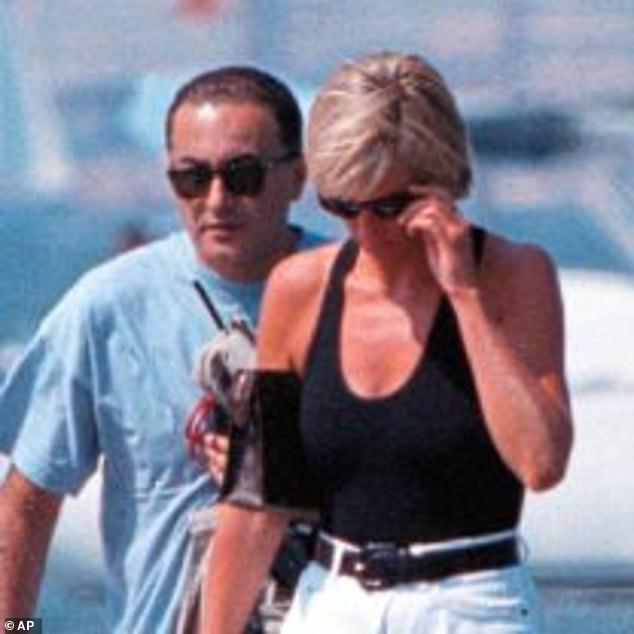 Princess Diana pictured with her companion Dodi Fayed. Sarah says there were some brilliant testimonies, not least from the Daily Mail’s own Richard Kay, a close confidant of Diana, but also David Douglas

After all, here was Richard Tomlinson, a former MI6 spy, turning up in Paris and telling the French inquiry that he’d witnessed plans for an assassination; here was James Andanson, paparazzo who drove a white Fiat identical to the one seen by witnesses in the tunnel at the time of the accident, found incinerated in his car with what looked like a bullet hole to the head. All that and more, plus a lot of suspenseful violin music.

There were some brilliant testimonies, not least from the Daily Mail’s own Richard Kay, a close confidant of Diana, but also David Douglas (one of the main investigators), Laurie Mayer (Al-Fayed’s former spokesman), Martine Monteil, and the wonderfully dry Eric Gigou of the French Brigade Criminelle, as well as Paul Burrell, stirring the pot as usual.

Ultimately, of course, the inquiry ruled that her death was no more than a tragic accident.

This shows how that conclusion was reached. Whether people choose to believe it, of course is another matter.

SUBTLE IT IS NOT… BUT IT IS EPIC FUN

HOUSE OF THE DRAGON 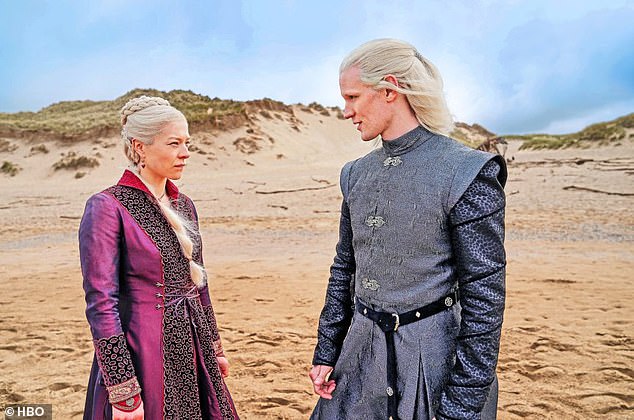 Matt Smith plays Daemon in the new House Of The Dragons. He is pictured here with Emma D’Arcy, who plays the king’s daughter Rhaenyra

If you loved Game Of Thrones (me), you’ll love this. If you never watched a single episode, it doesn’t matter. This is a prequel that requires no prior knowledge of the original.

We begin some two centuries before Jon Snow was even a twinkle in his aunt’s eye, 100 years into the reign of white-haired House Targaryen. On the throne is the surprisingly avuncular King Viserys.

He has 99 problems, but a lack of dragons ain’t one. He has ten of the beasts, as well as a spirited daughter and a wicked brother (played with psychotic menace by Matt Smith), and a castle full of scheming courtiers.

How do we know that the brother is a bad ’un? Well, his name is Daemon, for a start.

And if that isn’t enough of a hint, there’s a wheelbarrow full of severed limbs he’s liberated from their owners. He likes brothels (there is the obligatory humping scene) and jousting (his snazzy helmet has dragon wings).

Subtle it is not. But it is fun. The king’s daughter, Rhaenyra, is a tomboy who smells of dragon, and dreams of more than marriage and motherhood. The stage is set for an epic showdown.

Along the way, there’s plenty of wanton violence and death. But the sense of intrigue that captivated millions remains. The lure, I fear, is irresistible.

A CRAZY TAKE ON CHRISTIE 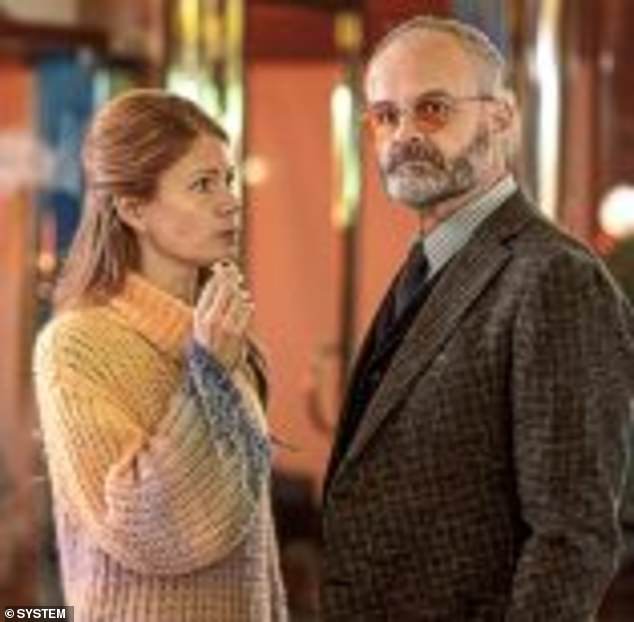 His sidekick/thorn in his side is Klara, a TV producer in search of a new project.

She decides Hjerson is it, and stalks him almost to the point of insanity. Meanwhile, there’s a murder… It’s utterly bonkers, but in a good way.