Scarlett Johansson and her husband Colin Jost set their worries to the side as they enjoyed some fun in the sun off the coast of the Hamptons on Friday.

The actress, 37, wowed in a wine red bikini while relaxing with her husband and several friends on a sleek boat. 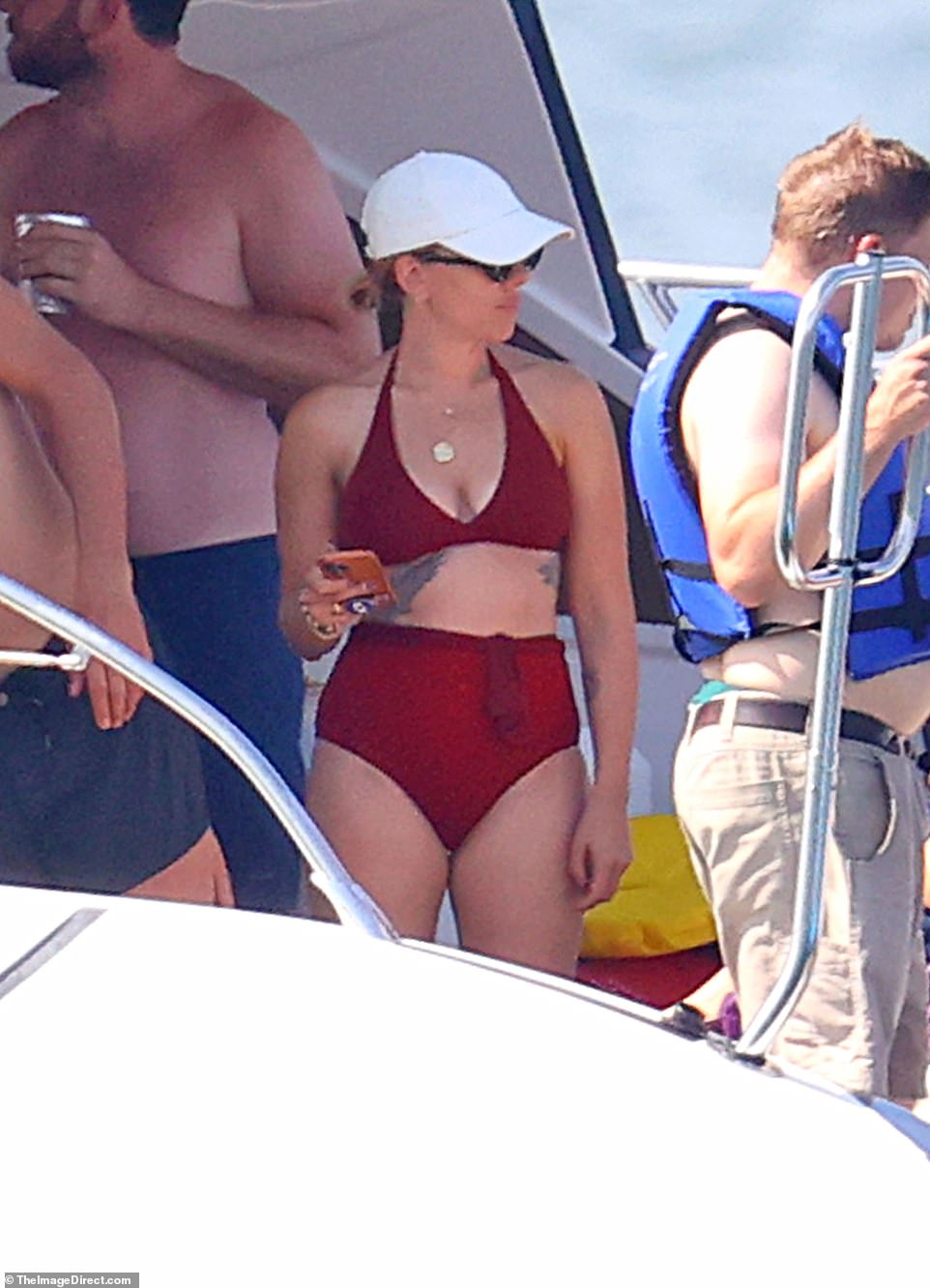 Red-y or not! Scarlett Johansson wowed in a wine red bikini while relaxing on board a boat with her husband and several friends off the coast of the Hamptons on Friday

She basked in the sunshine with a pair of stylish sunnies concealing her eyes and a gold pendant necklace accessorizing the look.

Scarlett was the picture of relaxation hanging out with her pals with a cool drink in hand.

She sat on a deck as one of her friends took part in various summer activities, from sunbathing to fishing.

Scarlett beamed with happiness as she captured their adventures on her phone.

Boat loads of fun! The actress basked in the sunshine in a wine red bikini 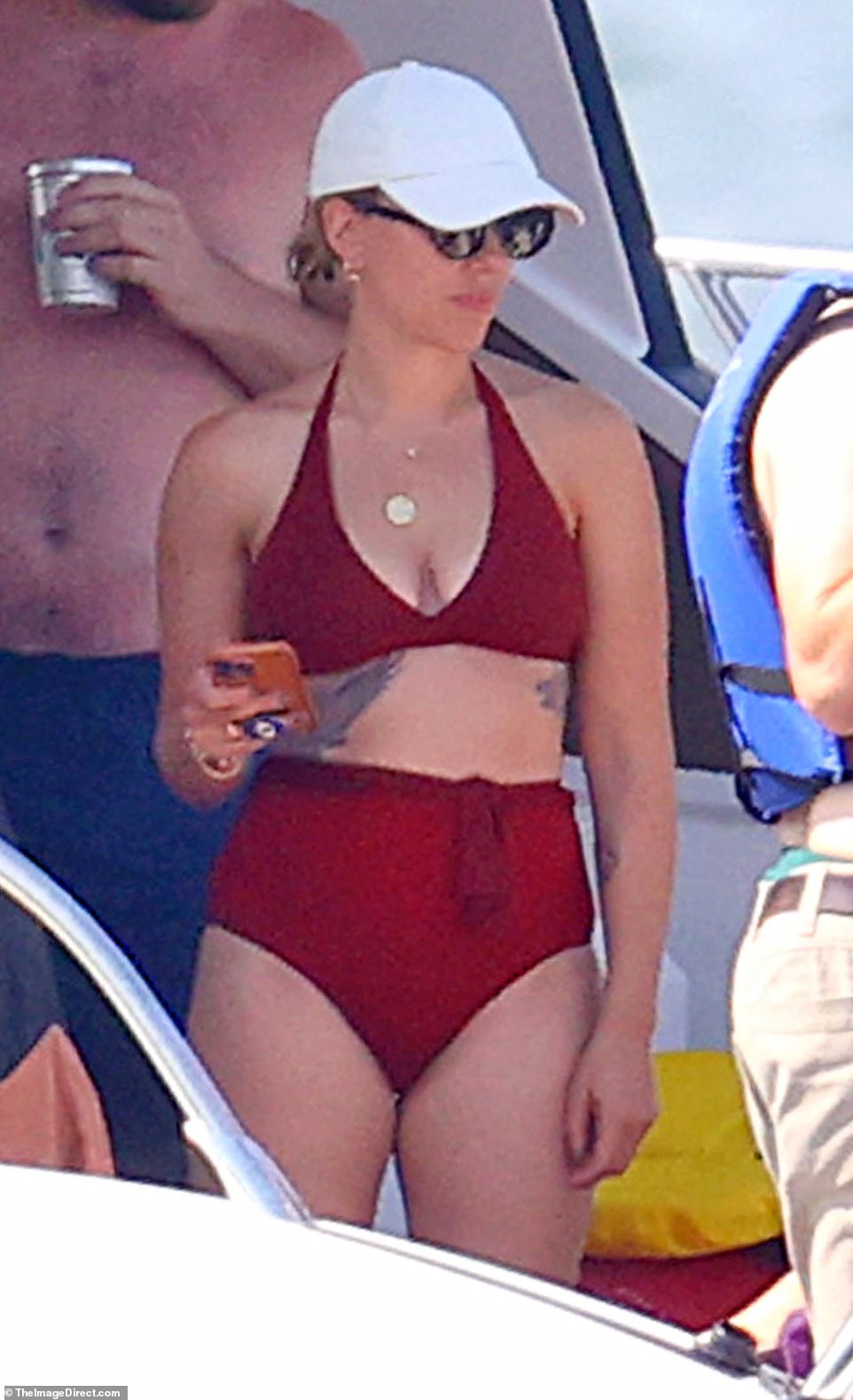 Keeping connected: Despite enjoying some fun in the sun, she was still connected to her phone

Throwing shade: The beauty was well-protected against the sun with a cap and pair of shades shielding her 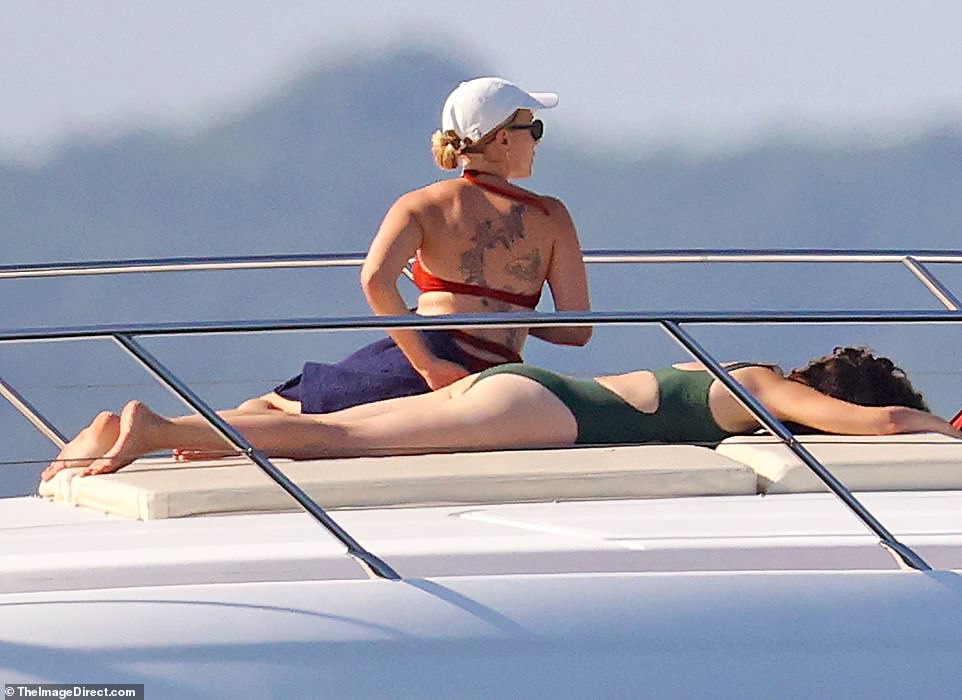 Rest and relax! Johansson admired the ocean views as her friend topped up her tan beside her

It wasn’t all just well-deserved R&R for Scarlett, who also got in an adrenaline rush jet skiing along the water.

The Black Widow actress wore a blue life vest as she explored the high seas.

Her husband Colin, 40, also enjoyed an action-packed day on the water as he tried his hand out with some hydrofoil surfing.

The Saturday Night Live star wore blue trunks, a life vest, and helmet as he attempted the sport. 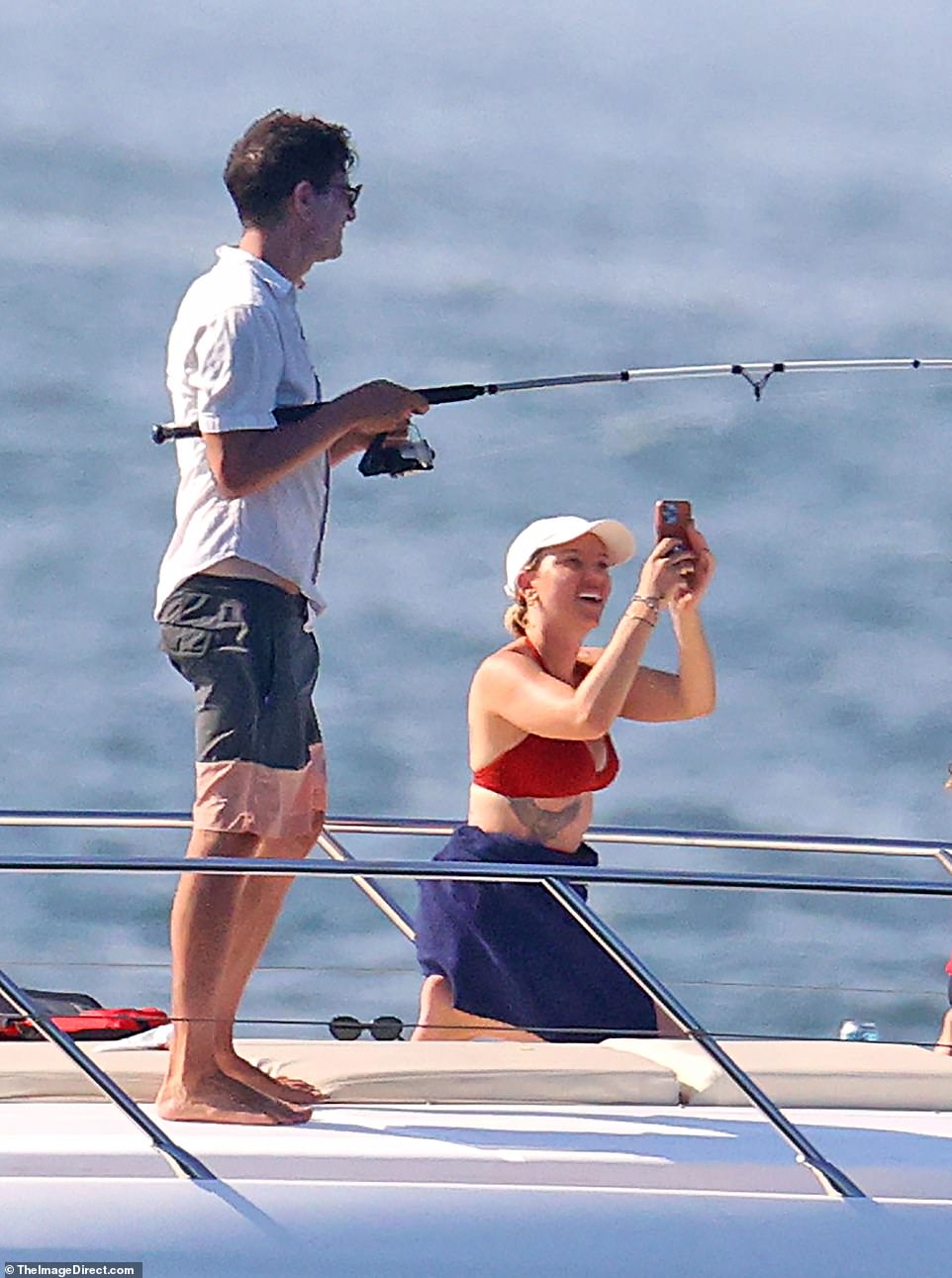 Fun in the sun! Scarlett beamed with happiness as she captured the fun on her phone as a friend went fishing 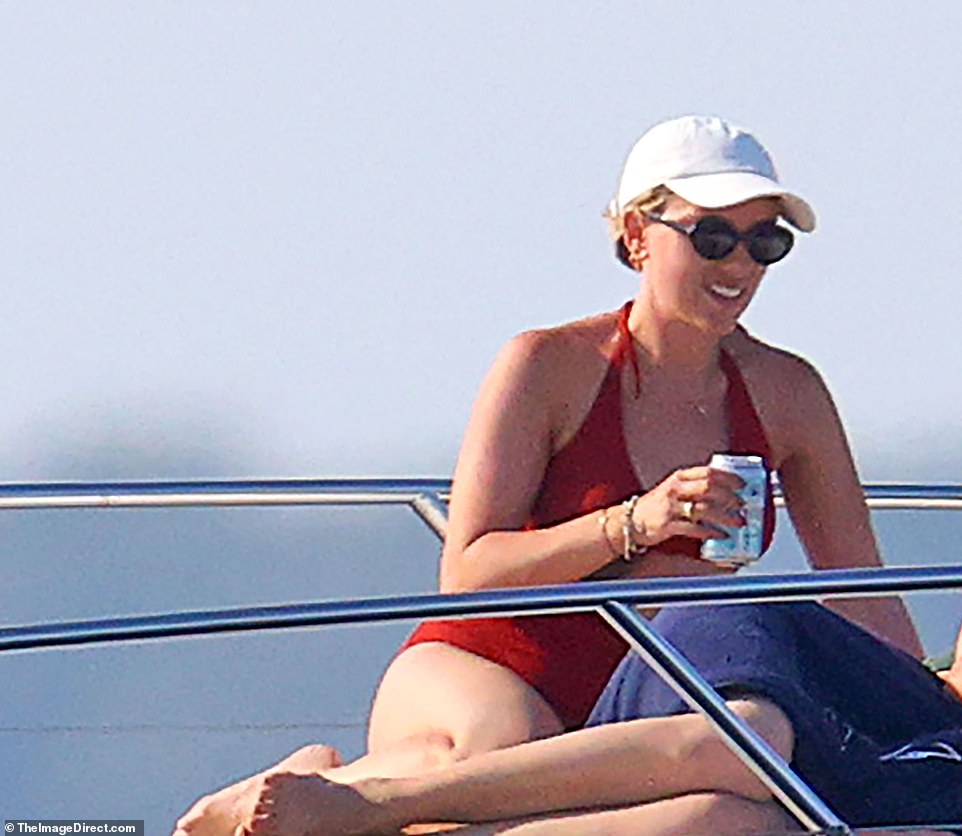 Hydrate: She enjoyed a canned drink as she relaxed in the sun 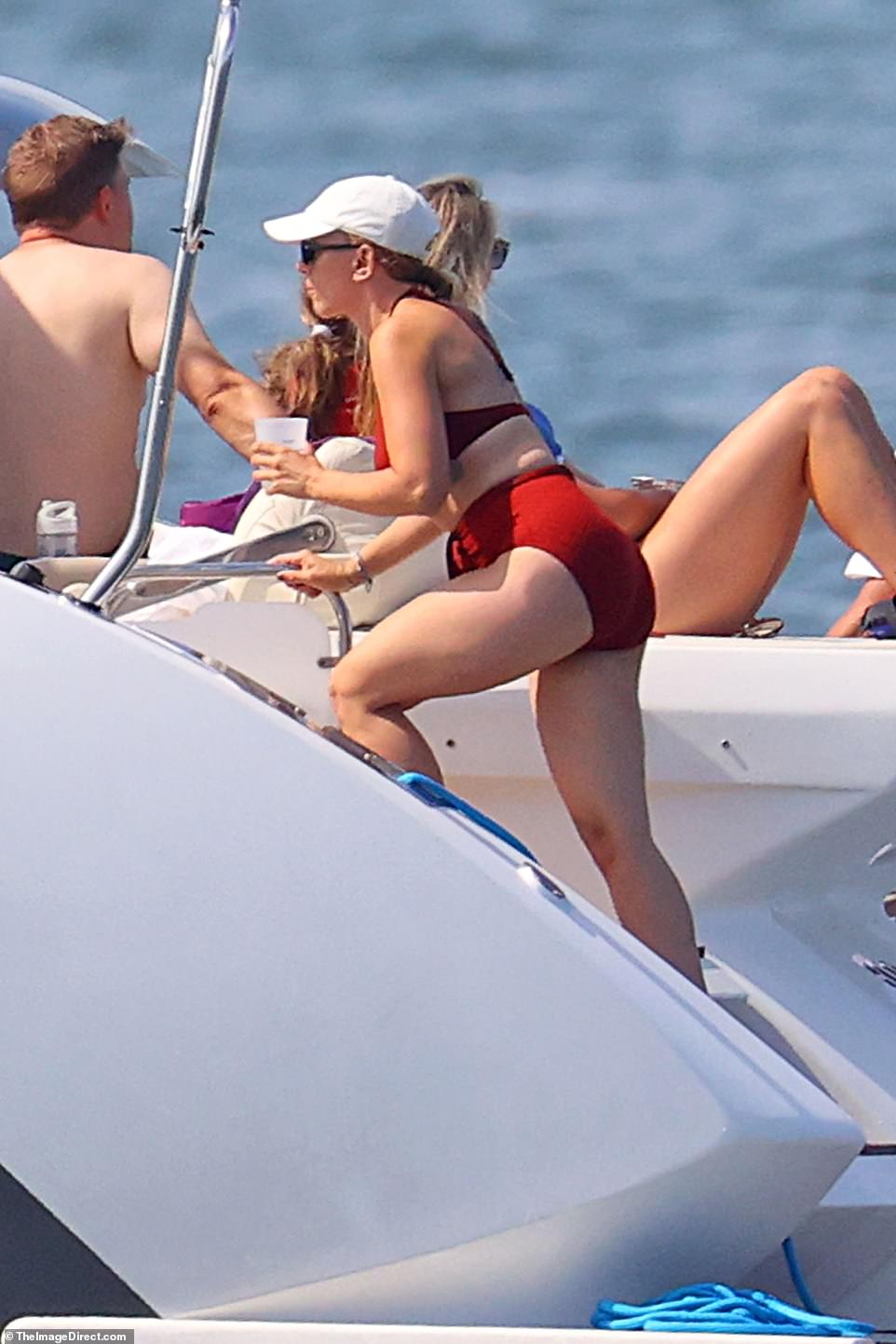 Leggy lady! Scarlett put on a leggy display as she climbed upstairs 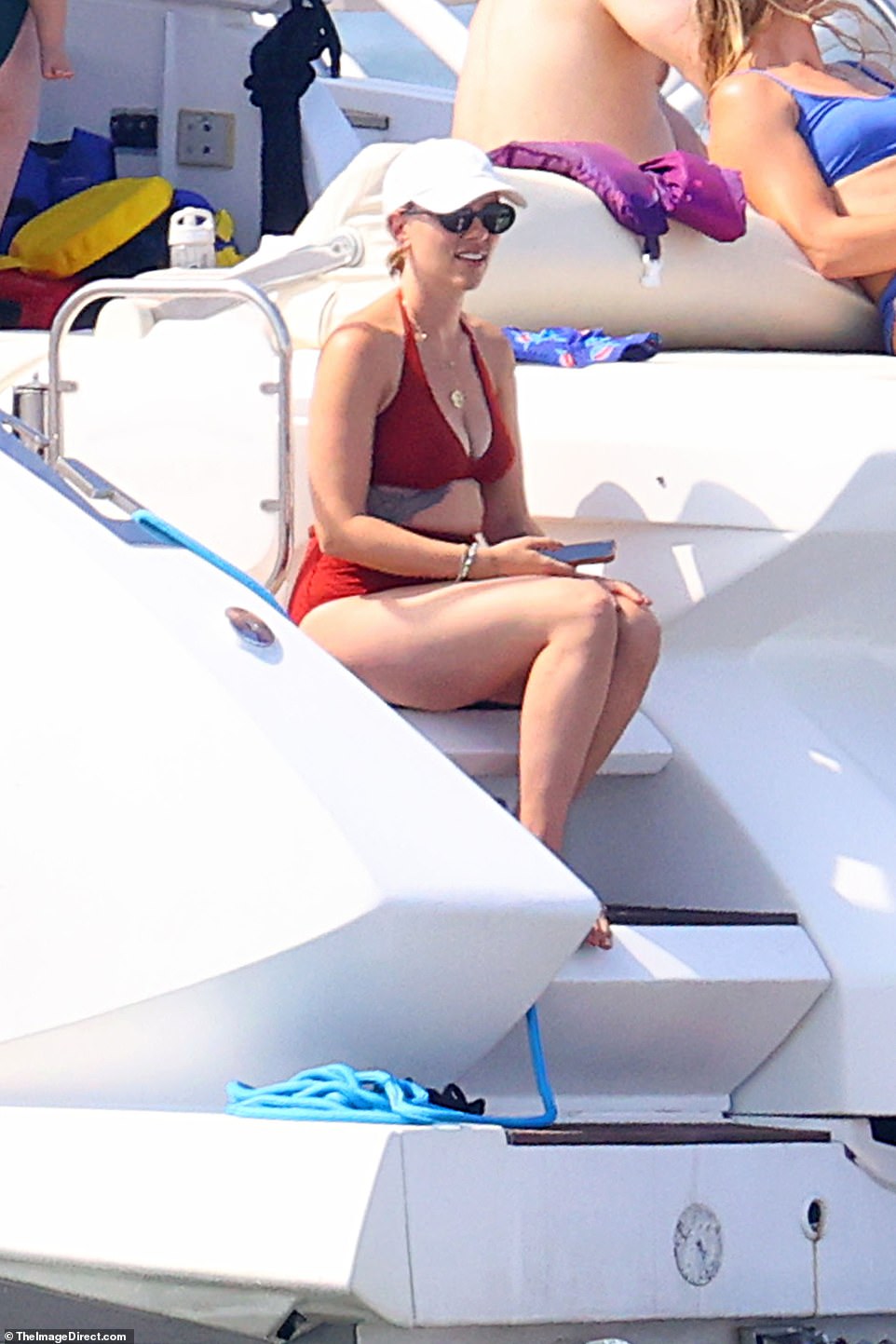 Kicking back! The actress took a seat on the staircase 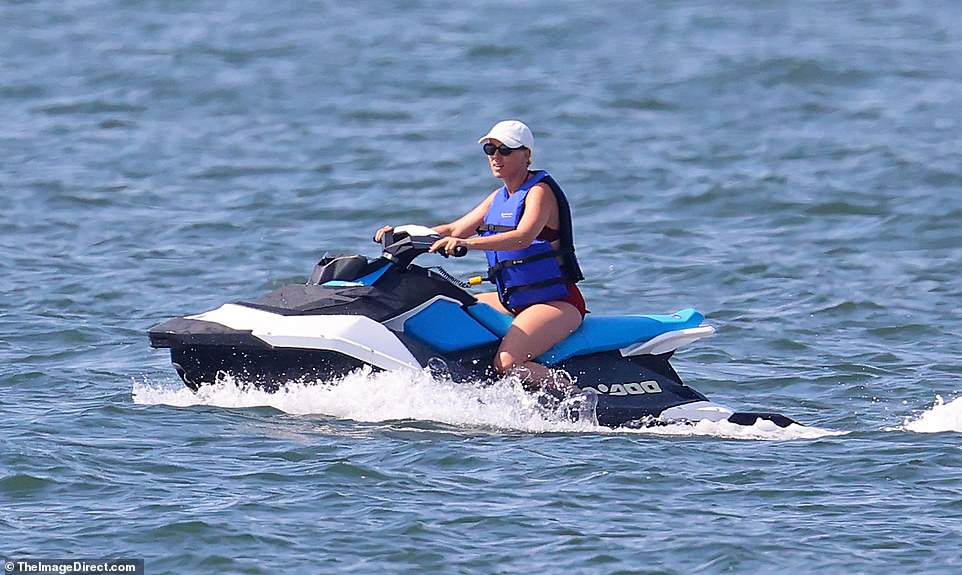 Let’s do this! Scarlett explored the high seas on a jet ski

Colin had some luck balancing on the surfboard as it rose from the water, but did unfortunately suffer a wipe-out.

The star looked like a total pro, however, as he dove expertly into the water.

In August 2021, her rep confirmed to People that the actress had ‘recently’ welcomed her son with Colin. 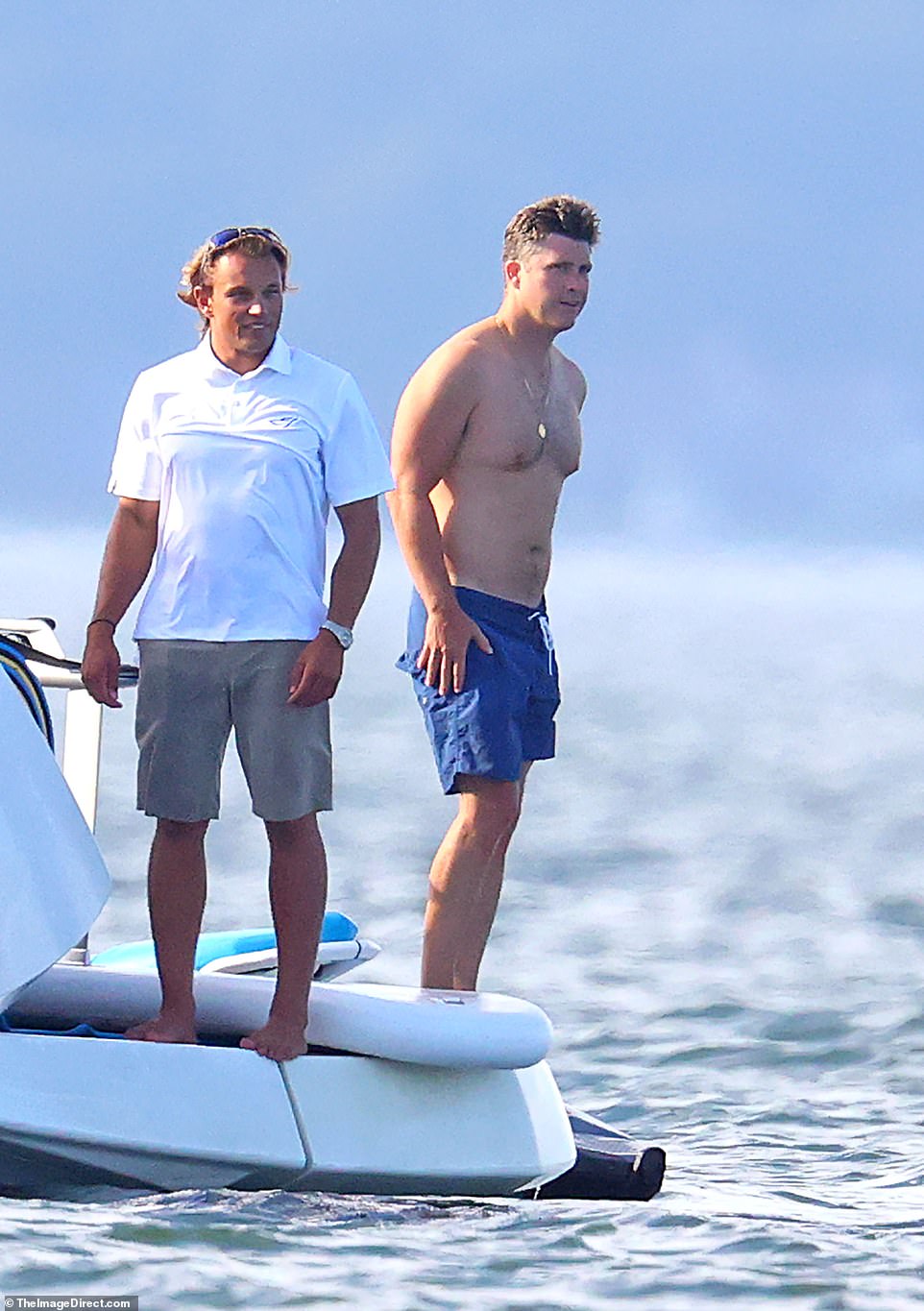 Making waves! Jost ditched the shirt as he stood at the edge of the boat 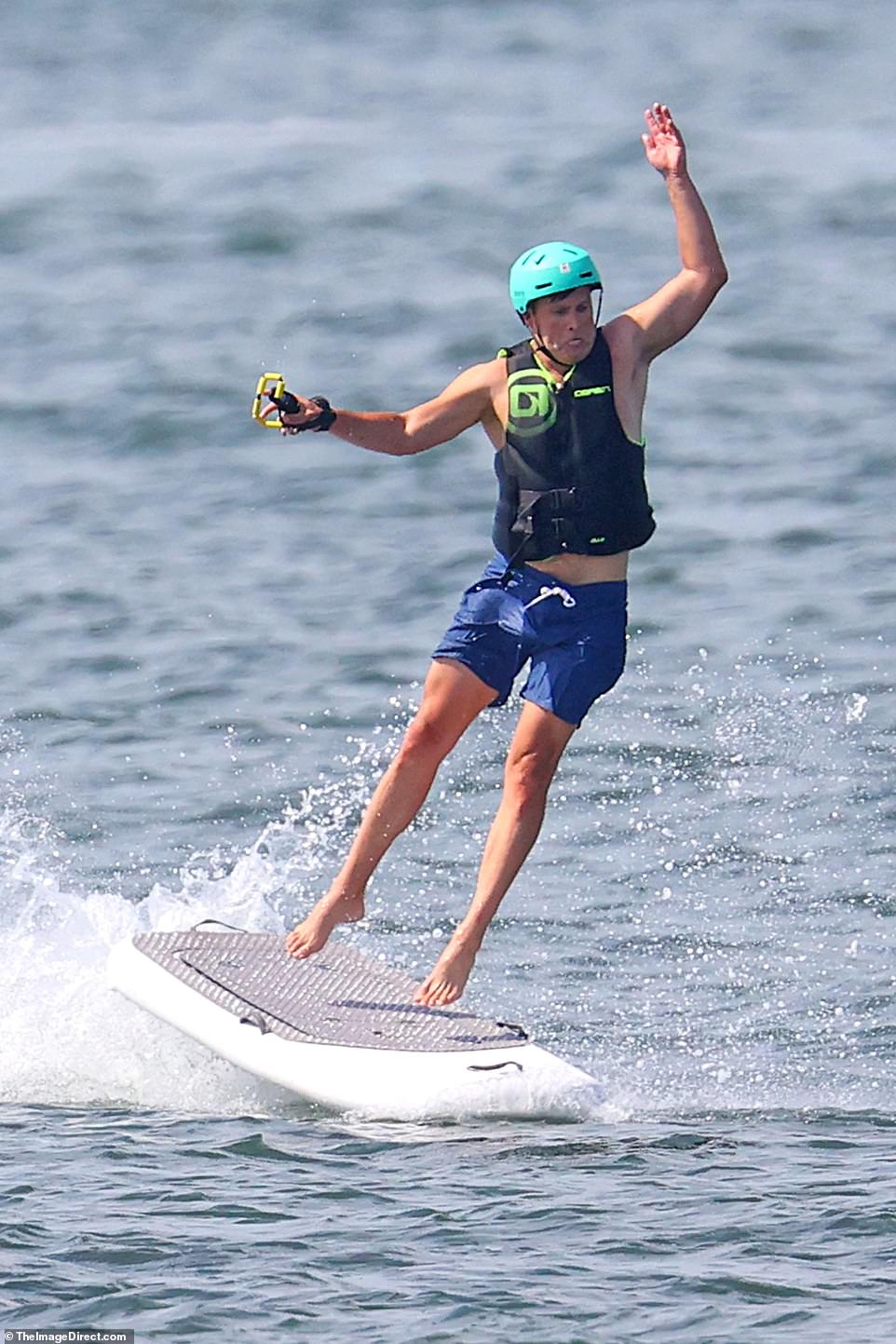 H2-Whoa! Colin tried his hand out at some hydrofoil surfing 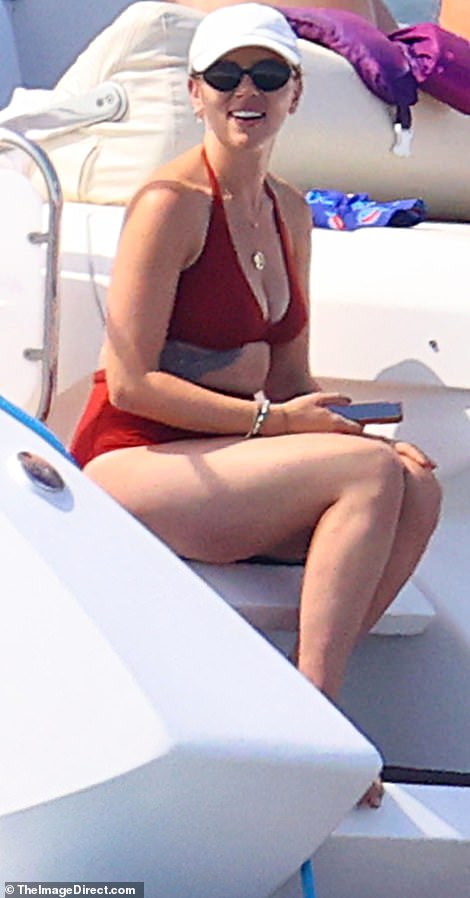 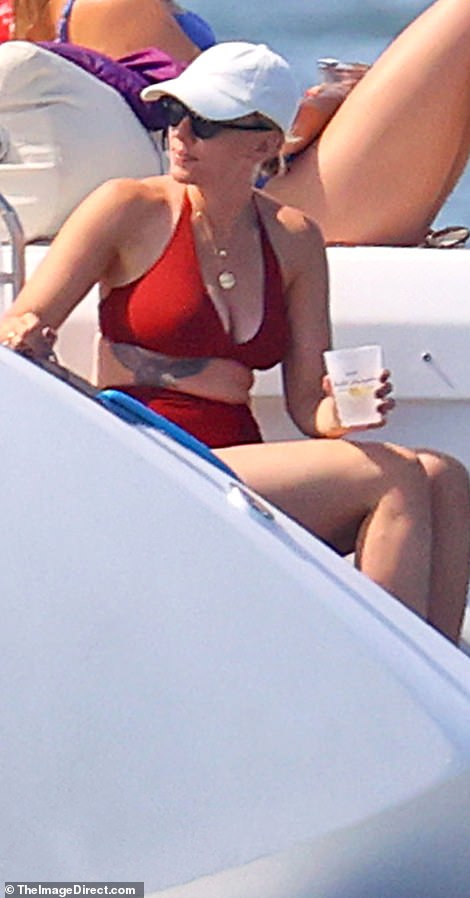 Happy camper! Scarlett cast a smile as she topped up her tan

SNL funnyman Jost revealed at the time that they had named their baby boy Cosmo, posting onto Instagram: ‘Ok ok we had a baby. His name is Cosmo. We love him very much.’ He also jokingly wrote that enquiries should be directed to their publicist – tagging his SNL Weekend Update cohost Michael Che.

While Scarlett may now be making the most of her summer break, it won’t be much longer until she is back on the film set.

The actress is set to star in the upcoming film The Sea Change, which will also be the directorial debut of Oscar-nominated actress Kristin Scott Thomas.

The film is based on the 1959 novel of the same name by Elizabeth Jane Howard and centres on the famous London playwright Emmanuel and his sickly wife Lillian – who has never truly buried the memory of the couple’s late daughter Sarah.

The pair’s rocky marriage then takes a surprise turn when they travel to a remote Greek island.

It is assumed that Scarlett will be playing Lillian but details for her role are yet to be confirmed.

Kristin first announced her intention to direct and star in ‘The Sea Change’ in 2017. Mark Strong and Anya Taylor-Joy were in talks to co-star but the project never materialized.

Rebecca Lenkiewicz wrote the script for the film and Thorston Schumacher is serving as the movie’s producer. 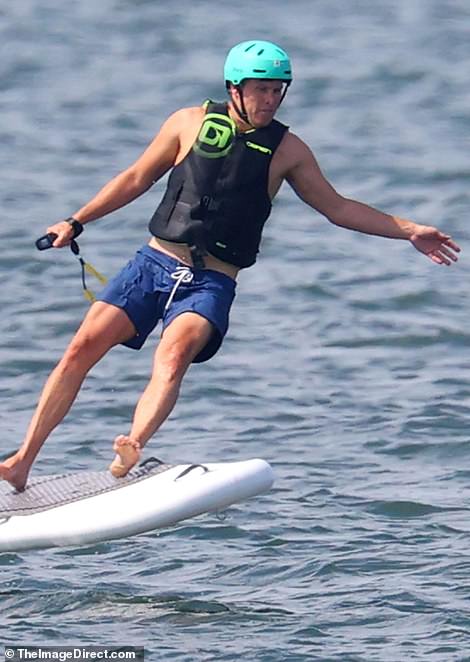 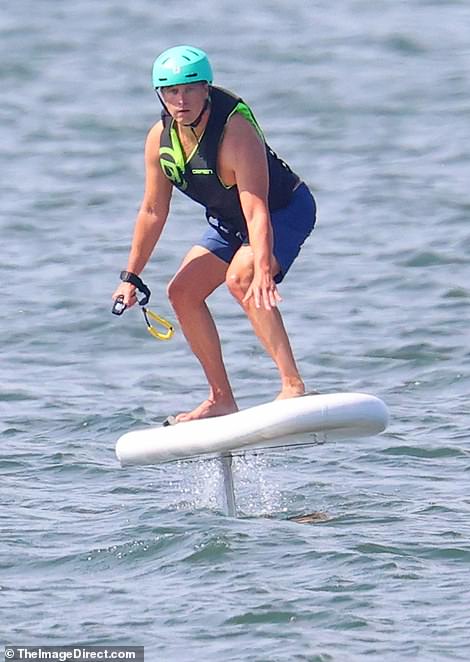 Giving it a go! The Saturday Night Live star wore blue trunks, a life vest, and helmet as he attempted the sport 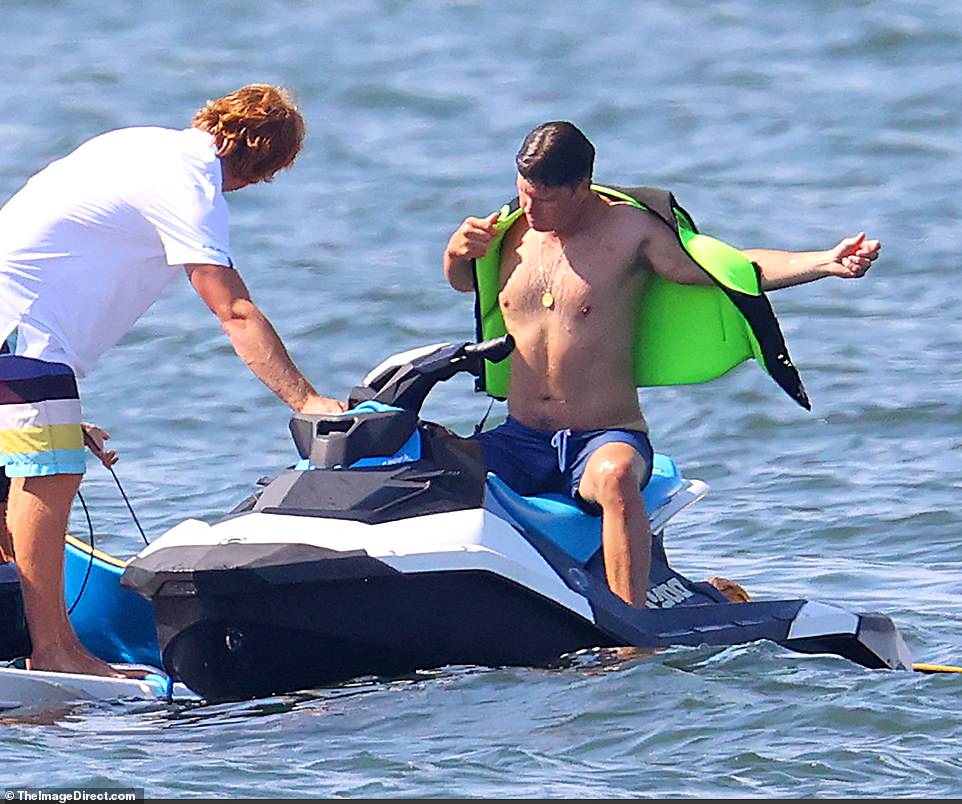 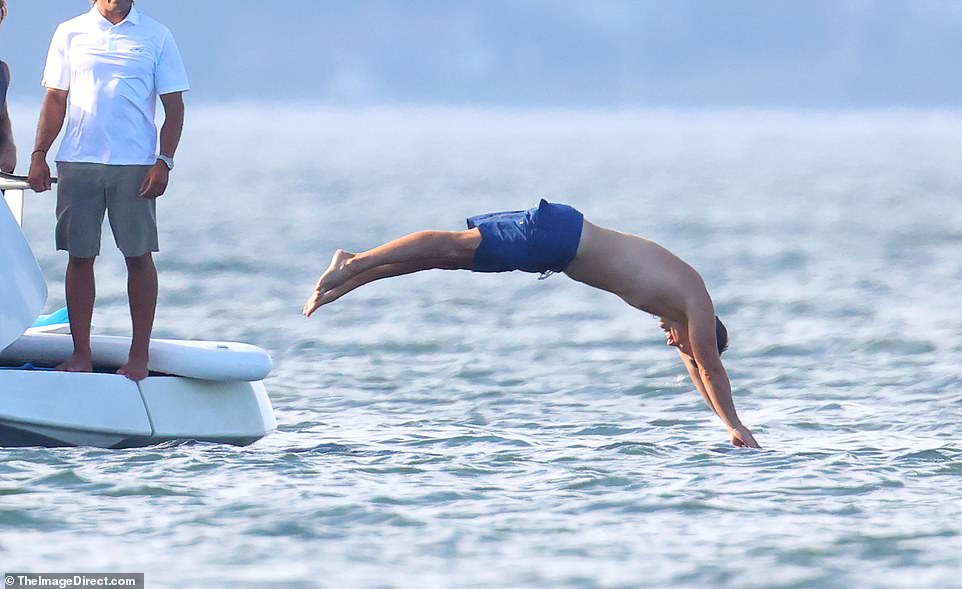 Come on in, the water’s fine! Colin dove perfectly into the water 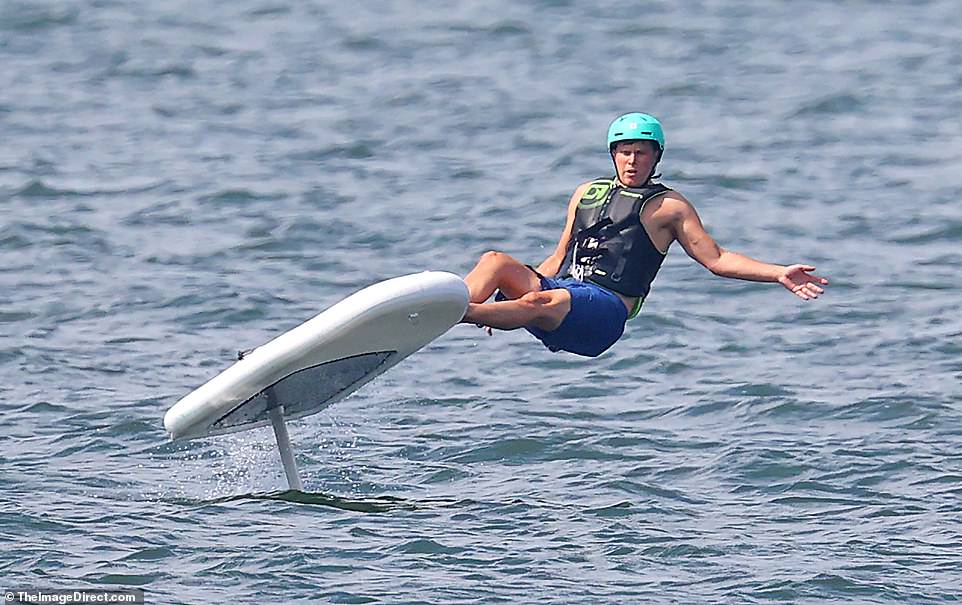