The Bundestag has voted overwhelmingly in favour of supplying Ukraine with heavy weapons. Most mainstream politicians and nearly all parties support the move – including the Chancellor’s own Social Democrat SPD, his coalition partners, the Greens and the liberal FDP, as well as the conservative opposition. News Germany has hardly delivered any weapons to the war-torn nation for the past nine weeks is expected to renew calls for Mr Scholz to ramp up aid efforts.

National outlet Welt reported that Ukraine has only received two weapon shipments from Germany since March, and Chancellor Olaf Scholz has so far refused to supply German battle tanks and APCs.

The armoured vehicles are made by Rheinmetall, headquartered in Munich, and the arms company has repeatedly said it is willing and able to provide them to Ukraine.

Mr Melnyk told Bild newspaper: “Militarily, Ukraine is simply being left in the lurch by Berlin.”

He added the German chancellor “lacks leadership and courage” in the handling of Germany’s response to the war.

The accusations, which the German government later rejected, arguing such deliveries could not be rushed, reflect the Chancellor’s wavering policy on military support – one that could originate in the country’s own history. 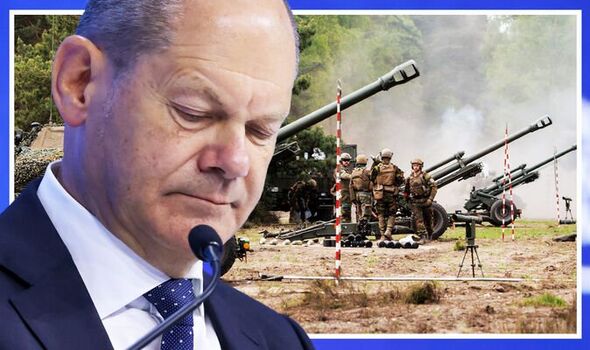 Germany’s Scholz is under scrutiny over the country’s arms supply policy (Image: Getty)

When Berlin announced in late February, only a few days into the war, that it would send 1,000 anti-tank weapons and 500 Stinger anti-aircraft defence systems from its stockpile to Ukraine, it reversed a historic policy of never sending weapons to conflict zones.

“It threatens our entire post-war order. In this situation, it is our duty to do our utmost to support Ukraine in defending itself against Vladimir Putin’s invading army.

“Germany stands closely by Ukraine’s side.”

But just how closely Europe’s biggest economy and the world’s fifth-largest arms exporter stands to Ukrainians has been under constant scrutiny ever since that statement.

Globally, there is a perception that Germany does not want to arm Ukraine.

Poland’s President Andrzej Duda earlier this week blamed Berlin for breaking its word, saying modern German Leopard tanks, promised by the government to replace the 200 Soviet-era tanks it had donated to Ukraine, have not arrived, suggesting the country was not honouring its commitment.

He said: “If we were supported by our German allies with tanks to replace those we gave to Ukraine, we’d be very grateful.

“We had such a promise. We hear Germany isn’t willing to fulfil [it].”

Anton Hofreiter, a Green MP and chair of the Bundestag’s European Affairs committee, criticised Mr Scholz’s hesitance on the matter.

He said: “Poland’s criticism is understandable.

“Germany has a difficult reputation in the EU anyway because we coordinate too little with our European partners.”

The politician, who is part of Germany’s traffic-light coalition, added: “We urgently need to work on this.”

Germany has also got tank swap deals with other eastern European NATO members, and has agreed to provide Ukraine with seven Panzerhaubitze 2000 long-range, self-propelled guns, and is training Ukrainian crews in Germany to use them.

Ukrainian Foreign Minister Dmytro Kuleba expressed frustration over the slow — if at all — delivery of Leopard tanks and Marder armoured vehicles, too.

He said: “I don’t understand why it’s so complicated, but I respect the situation in the German government and we’re curious to see how this will develop story ends.”

Fact is, while not as much as the United States, Berlin is supplying large amounts of weapons. Its volumes are comparable to other European countries, with media reports suggesting Germany ranks somewhere in the middle.

In addition to the above-mentioned aid, Germany has also promised 50 Gepards, the tank-like vehicles armed with radar-guided anti-aircraft cannons. A first shipment of 15 units is scheduled for delivery in July.

Criticism is thought to be linked, at least to a certain extent, to Mr Scholz’s wording surrounding the deadly conflict in Ukraine.

Often, he will use sentences such as “Putin must not win, Ukraine must exist”. Yet, he never explicitly mentions a Ukrainian war victory.

In discussions at the World Economic Forum in Davos on Thursday, though, Mr Scholz was clear.

In what could well be his most straightforward remarks on a Ukrainian triumph, he said: “There will be no dictated peace. Ukraine will not accept that, and neither will we.”

Bulb fury: Urgent demands to nationalise energy provider as taxpayer forks out in bail out