US-based author Daniel Kalder, in an op-ed published on the UnHerd website, commented that growing up in Scotland before devolution he found deference towards authority in short supply. He stated: “In the Eighties and Nineties, a freewheeling attitude of utter contempt for the high and mighty seemed as Scottish as a Tunnock’s Tea Cake. Yet on my first visit home from Texas since pandemic chaos destabilised the world, I detected a very different mood in the air.”

As evidence of a loss of humour, Mr Kalder pointed to the SNP Government’s Hate Crime Bill which was passed by MSPs at Holyrood in March, 2021.

The legislation makes “stirring up hatred” an offence but opponents of the Bill have argued that it could have a chilling effect on free speech.

Some believed it amounted to interference in private and family life, asking why any government should decide what can and cannot be said in private.

Mr Kalder commented: “This was the first time I had been in Scotland since the government at Holyrood had passed a law making it illegal to utter wicked words in the home, the enforcement of which will necessarily involve family members denouncing the sinners among them to the authorities.” 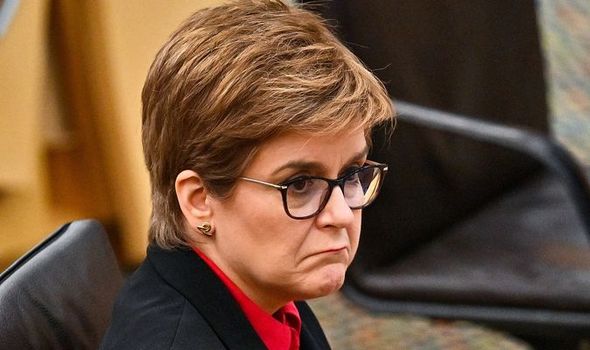 He admitted not seeing the SNP leader’s daily Covid briefings on TV, although he was aware that when the BBC proposed to broadcast them less often there had been “widespread criticism” with a petition to keep them on air attracted more than 50,000 signatures.

The writer added: “Meanwhile, I found myself receiving regular moral instruction from the Government in the form of signs admonishing me against uttering wicked words on the train, letting my dog s*** in the street, or conversely, letting my dog hunt hares; minimal unit pricing for alcohol had also been in place for three years.

“What happened to the Scotland I remember? It was as if, by voting the nationalists into power, my fellow countrymen had accidentally resurrected Calvinism in woke form.”

However, he went on to speculate that “the virulently anti-authority strain” in Scotland’s national character was pronounced in the Eighties and Nineties not because of an innate aspect of the Scottish soul but because the country was ruled by an indifferent Tory Government which found little support north of the border.

“After all, it’s easy to be anti-establishment when you have nothing to gain from the establishment. Once the SNP came to power, that changed.

“There was a different power in the land, and many people identified with it, agreed with it, and benefited from it.”

He claimed that Brexit and the “omnishambles” of Boris Johnson’s leadership made it easy for the SNP to direct the caustic, skeptical, questioning attitude of the Scottish people southwards.

“However, it is now increasingly indulged in private: could this be some indicator of a totalitarian state?”

Fellow reader, SULPICIA LEPIDINA, quoted a tweet by John Cleese from December 2018: “The PC police remind me of the old definition of a Scottish Presbyterian: a man who has a nasty, nagging feeling that somebody, somewhere is enjoying themselves.

“They are addicted to the warm glow of self satisfaction and pride that comes from demonstrating their moral purity.”

AC Harper noted: “There are plenty of people in Scotland (and England too) who don’t care a fig for the admonitions of the Great and Good. Although they are not particularly great or good in Scotland.”

Meanwhile, Ms Sturgeon said in an update for MSPs on Tuesday that a requirement for two-metre physical distancing in settings where face coverings are exempt is being reduced to one metre.

The change will apply to settings such as religious services and those carrying out receptionist duties.

On organised children’s activities, she said: “From Friday, face coverings will no longer be required for any adult taking part in organised activities when they are directly interacting with children under the age of five.”

She went on to say that a requirement for secondary school pupils to wear face-coverings would receive careful consideration.

Scotland’s First Minister said her Government was not currently updating its coronavirus guidance on schools, but advisers were considering the issue.