Sealed with a tweet: Twitter says yes to Elon Musk’s £34bn bid claiming going private with the Tesla boss is the ‘best path forward’ for shareholders

The social media giant said going private with the Tesla tycoon was the ‘best path forward’ for its shareholders.

And Musk, the word’s richest man, said he will make Twitter ‘better than ever’ with new features and a shake-up to boost free speech on the platform. 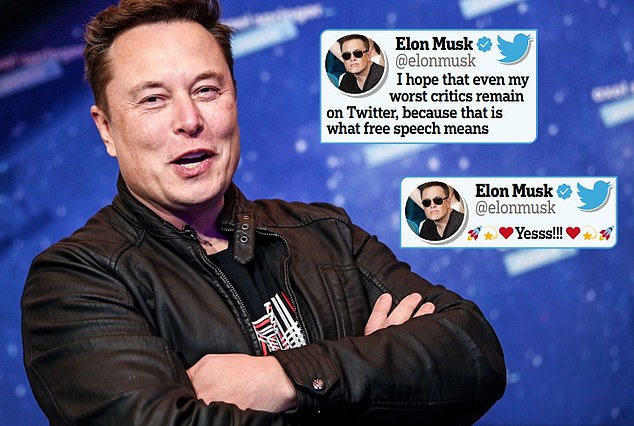 Victory tweet: Elon Musk (pictured), the word’s richest man, said he will make Twitter ‘better than ever’ with new features and a shake-up to boost free speech

He said: ‘Free speech is the bedrock of a functioning democracy, and Twitter is the digital town square where matters vital to the future of humanity are debated.

‘I look forward to working with the company and the community of users to unlock it.’

The South African entrepreneur also urged people to stick with him as he takes the company private in one of the most dramatic deals in US corporate history.

He tweeted: ‘I hope that even my worst critics remain on Twitter, because that is what free speech means.’

Talks between the Twitter board and Musk started on Sunday and resumed yesterday as the two thrashed out the finer details of the blockbuster deal.

Twitter chairman Bret Taylor said it was accepting the $54.20 per share offer after ‘a thoughtful and comprehensive evaluation’.

Twitter shares closed up 6 per cent at just under $52 in New York after the deal was announced.

But shares remained below Musk’s $54.20 offer price, hinting that shareholders still have reservations about his ability to get the deal done.

The deal is expected to be completed this year pending a shareholder vote and analyst Daniel Ives at investment firm Wedbush Securities said he expects the deal will pass.

He said: ‘It all came down to no other bidders or white knights emerging in the takeover process and Twitter’s Board back was against the wall once Musk detailed his $46billion in financing last week to get pen to paper on this deal.

‘We do not expect any major regulatory hurdles to the deal getting done as this soap opera now ends with Musk owning Twitter.’

The deal marked a dramatic U-turn from Twitter which had initially tried to block Musk – with the company vowing to implement a so-called poison pill.

But it is understood the 11- strong board was swayed by Musk’s unveiling of financing last Thursday.

In a securities filing, Musk announced a £36.5billion financing package, which included £20billion in debt from a group of banks led by Morgan Stanley, his financial adviser, and £16.5billion in fresh equity.

The debt component includes a margin loan of £9.8billion against his Tesla shares. The dramatic takeover has been a rollercoaster ride and comes just weeks after Musk bought a 9pc stake. Musk declared his intention to buy the company on April 14.

During the process he has used Twitter to try to garner support.But many are worried about the platform’s future direction.

Musk will overhaul its content-moderation policies and promote what he described as free speech on the platform.

Twitter’s chief executive Parag Agrawal will stay on. Last night Agrawal, 37, said: ‘Twitter has a purpose and relevance that impacts the entire world.’