Selma Blair’s ex Ron Carlson has been pictured for the first time after the Cruel Intentions actress accused him of physically attacking her at her home last month.

Carlson was spotted on his phone during a coffee run in Studio City on Thursday. 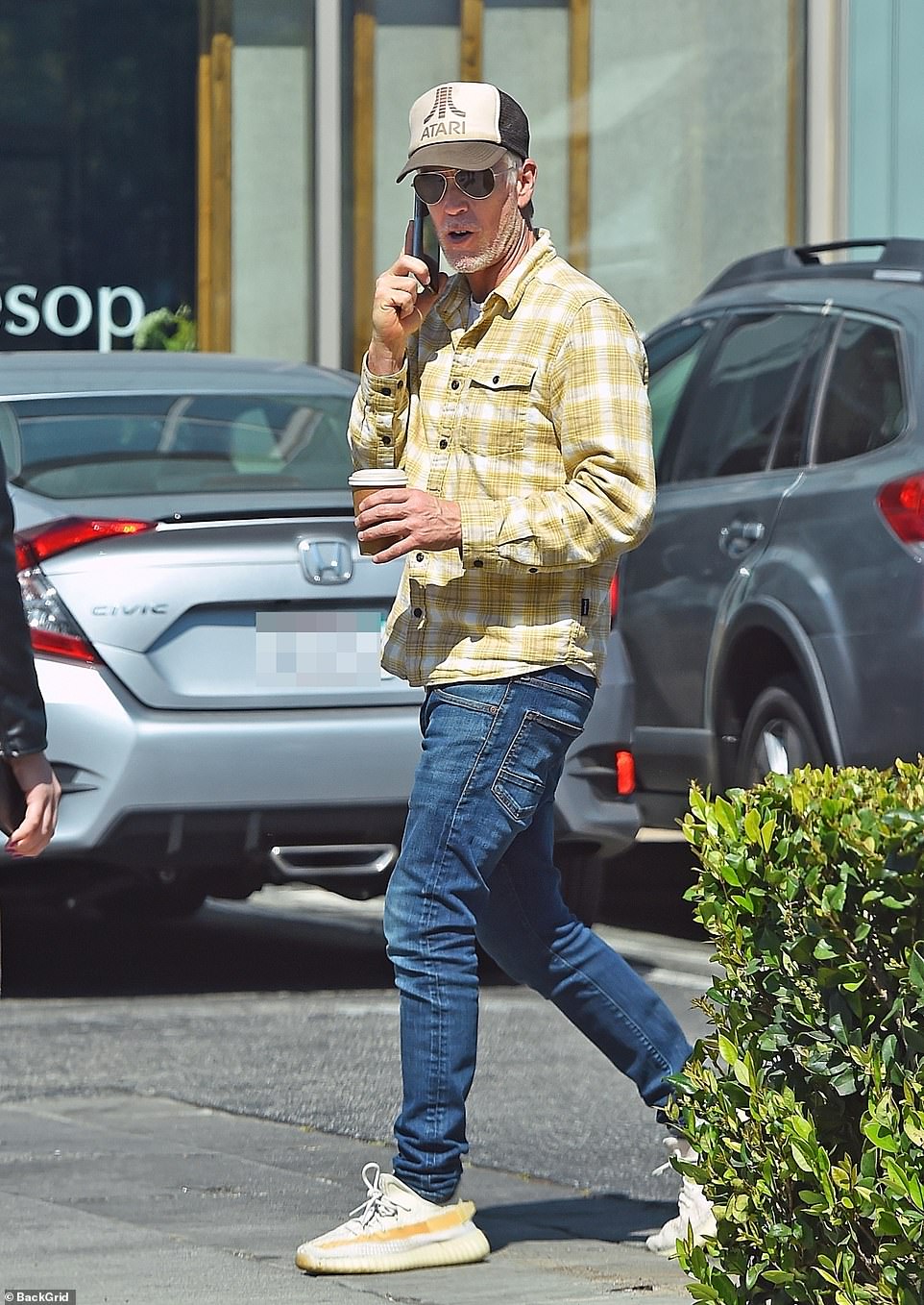 Carlson wore a green-yellow flannel shirt, blue jeans and trainers. He wore a plain white T-shirt beneath his button down.

Carlson attempted to keep a low-profile as he stepped out wearing a brown Atari cap and aviator style sunglasses.

He appeared deep in thought as he strode across the sidewalk, his phone pressed against his ear.

At one point, he raised his coffee to his lips.

Low-key: Carlson wore a green-yellow flannel shirt, blue jeans and trainers. He wore a plain white T-shirt beneath his button down 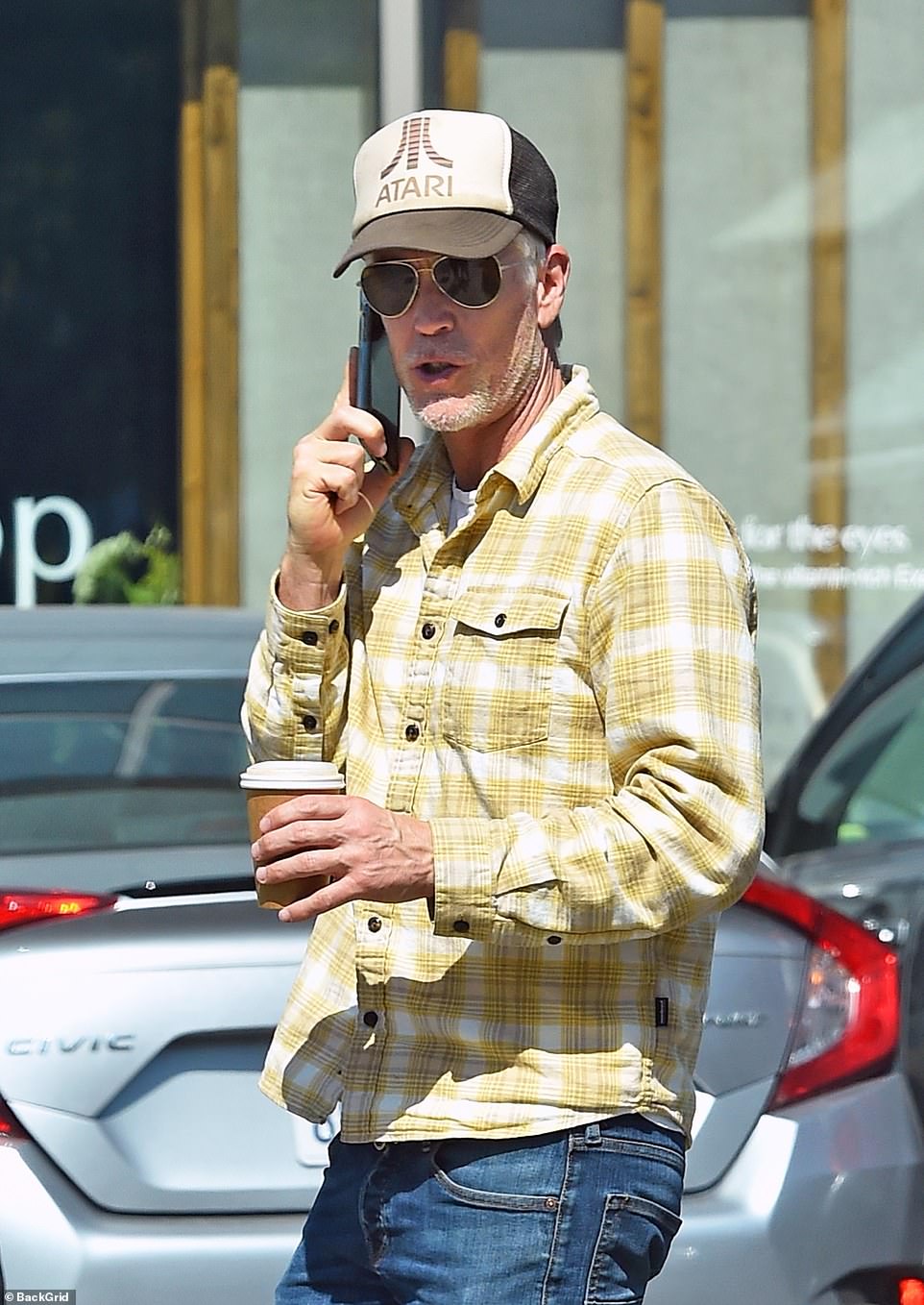 The sighting comes after news of the restraining order and alleged attack broke earlier this week.

Photos presented as part of Blair’s restraining order request appear to show her injuries after she was allegedly attacked by Carlson.

In the images, Blair, 49, has what looks like bruises and red marks around her throat and just under her chin. 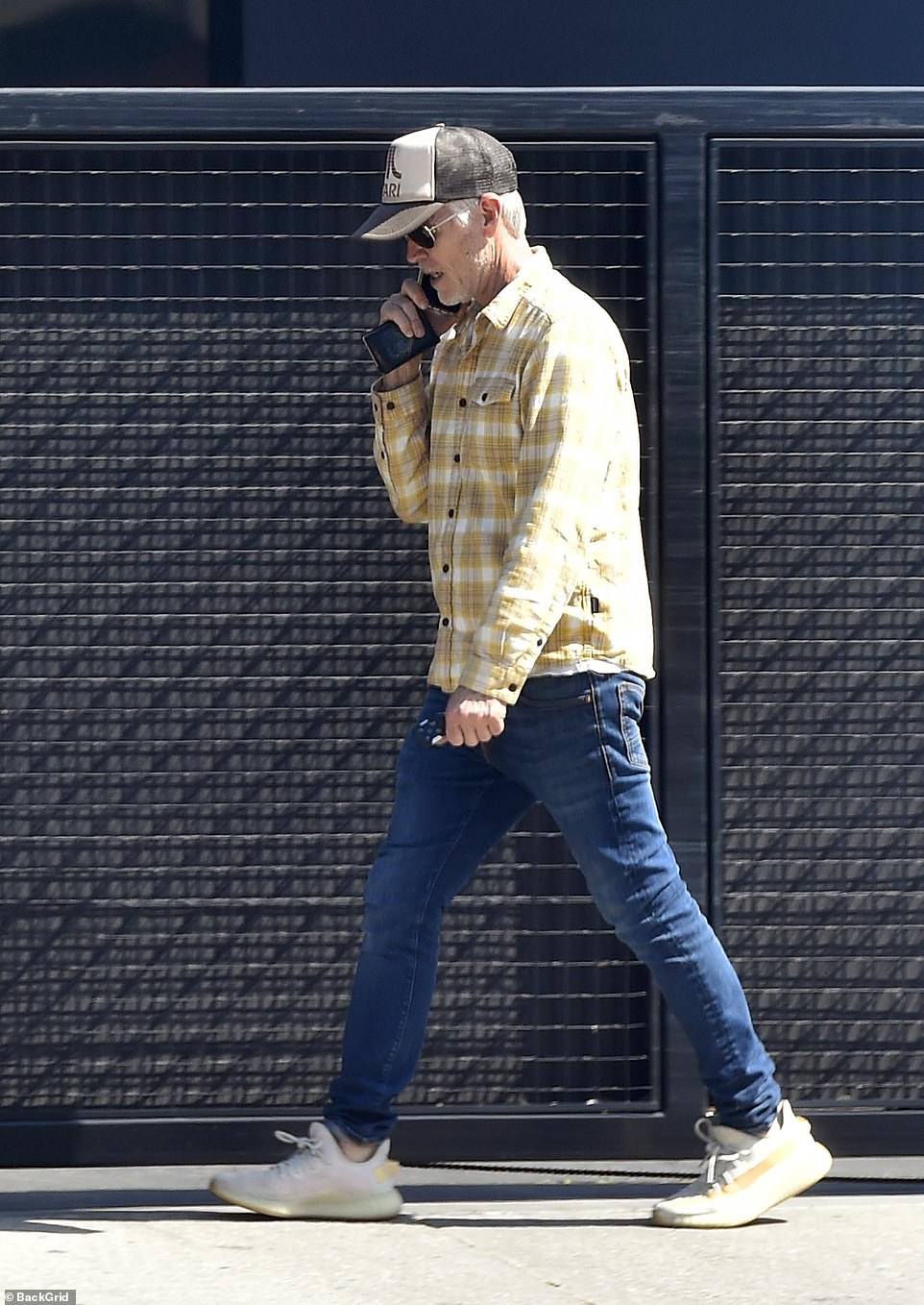 On the line: He appeared deep in thought as he strode across the sidewalk, his phone pressed against his ear 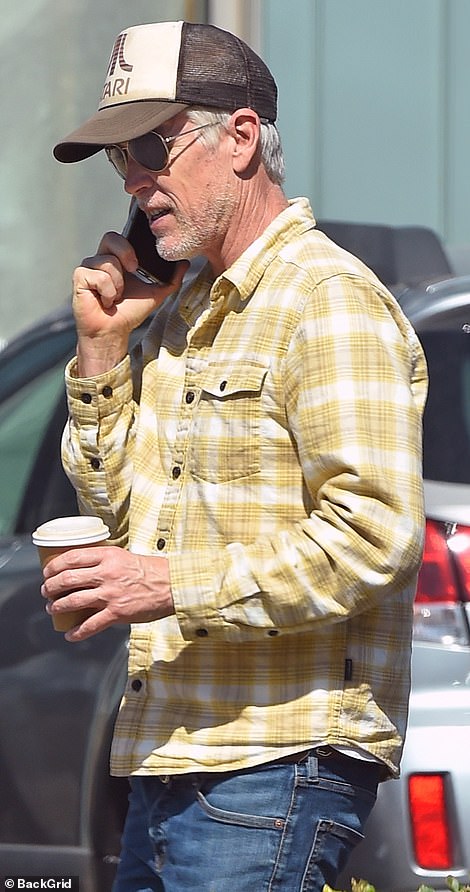 Coffee run: Carlson enjoyed a cup of coffee during his phone chat

One photo shows Blair — seemingly topless — with her head throne back and her neck extended to reveal what appear to be red marks along the sides of her neck.

She also appears to have dark bruises on her throat just below her chin, along with some bloodied scratches.

The photos included in the filing were taken by her housekeeper, according to the Los Angeles Times.

The photos were included as part of the documents for the actresses’ restraining order request. 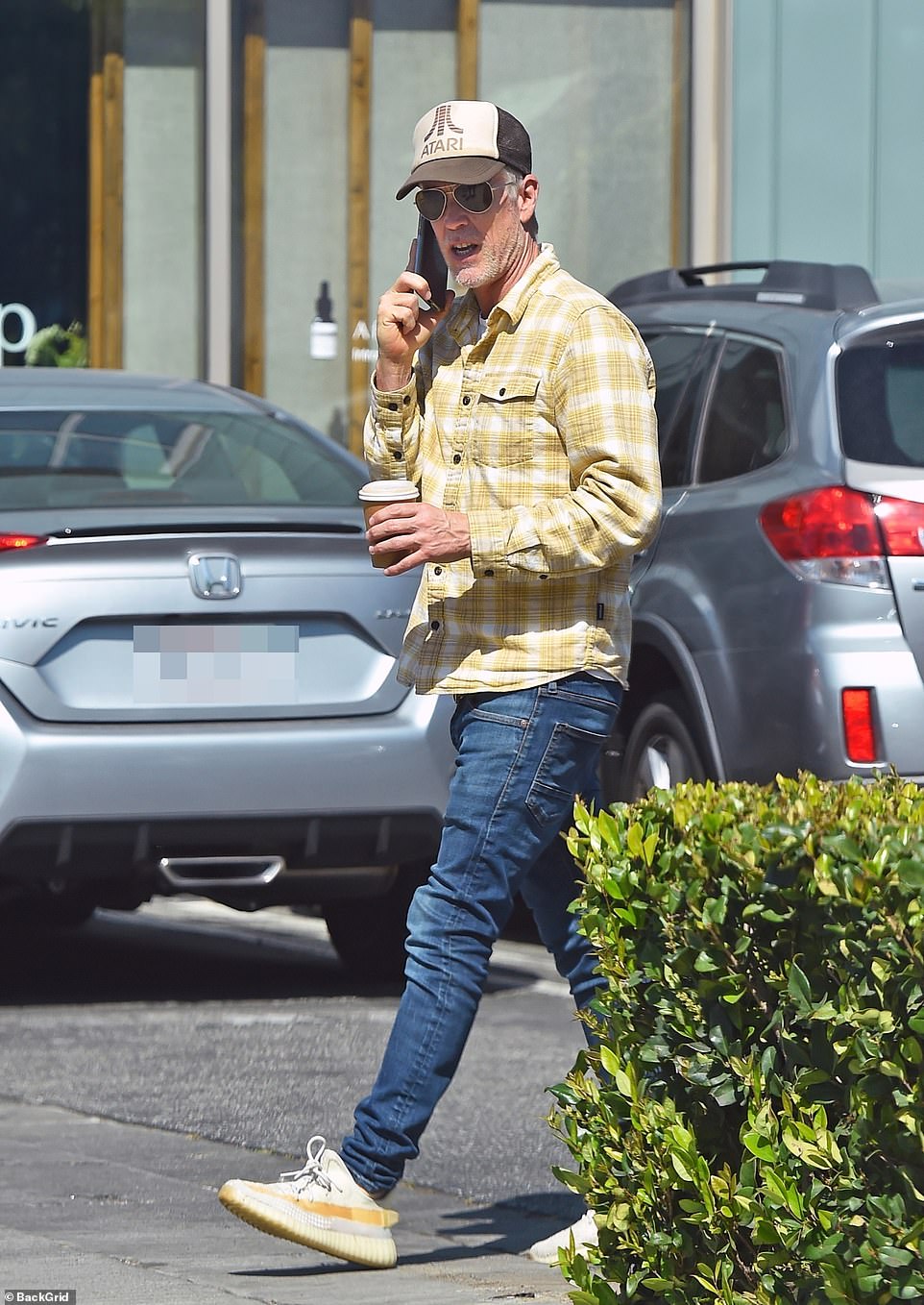 Stepping out: Carlson paired his blue jeans with off-white trainers 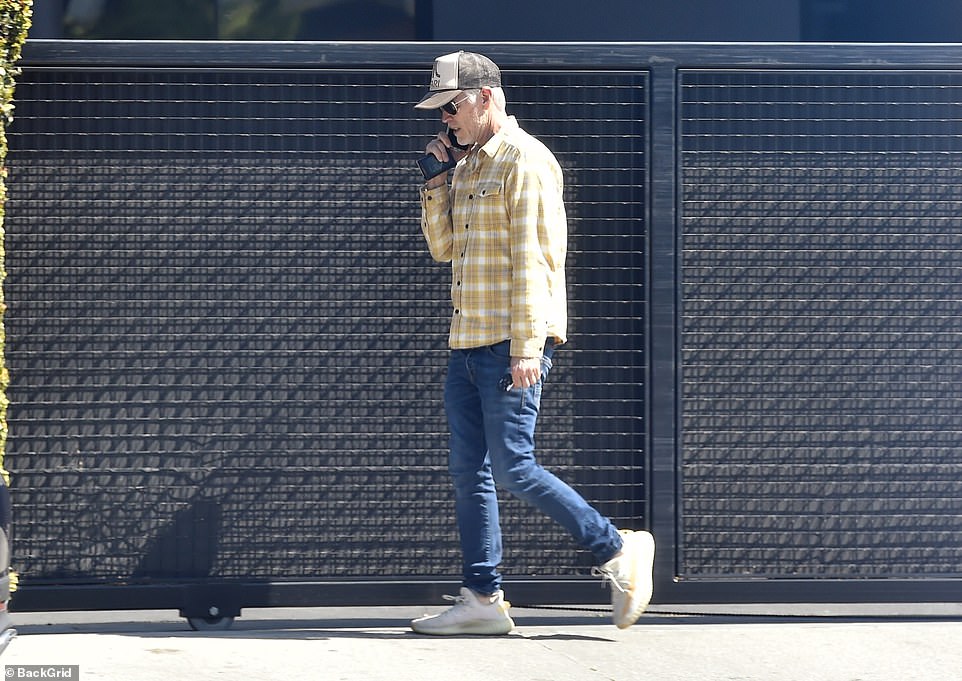 Blair alleges the incident occurred on February 22 after they had recently ended their long-term relationship, according to legal documents obtained by TMZ

Another view from the front with better lighting emphasizes what looks like a line of dark bruises extending from below her chin down to her throat as she again tilts her head back.

One photo taken from the side of Blair’s face seems to show more bruising, along with dark marks that may be bloodied scratches.

Other photos obtained by TMZ appear to show additional injuries, including a large scrape and bruise on her side and bruising on her arms.

After submitting the photos and other evidence in her documents, Blair was subsequently granted a restraining order against Carlson after claiming he physically attacked her last month while she was at her home in Los Angeles. 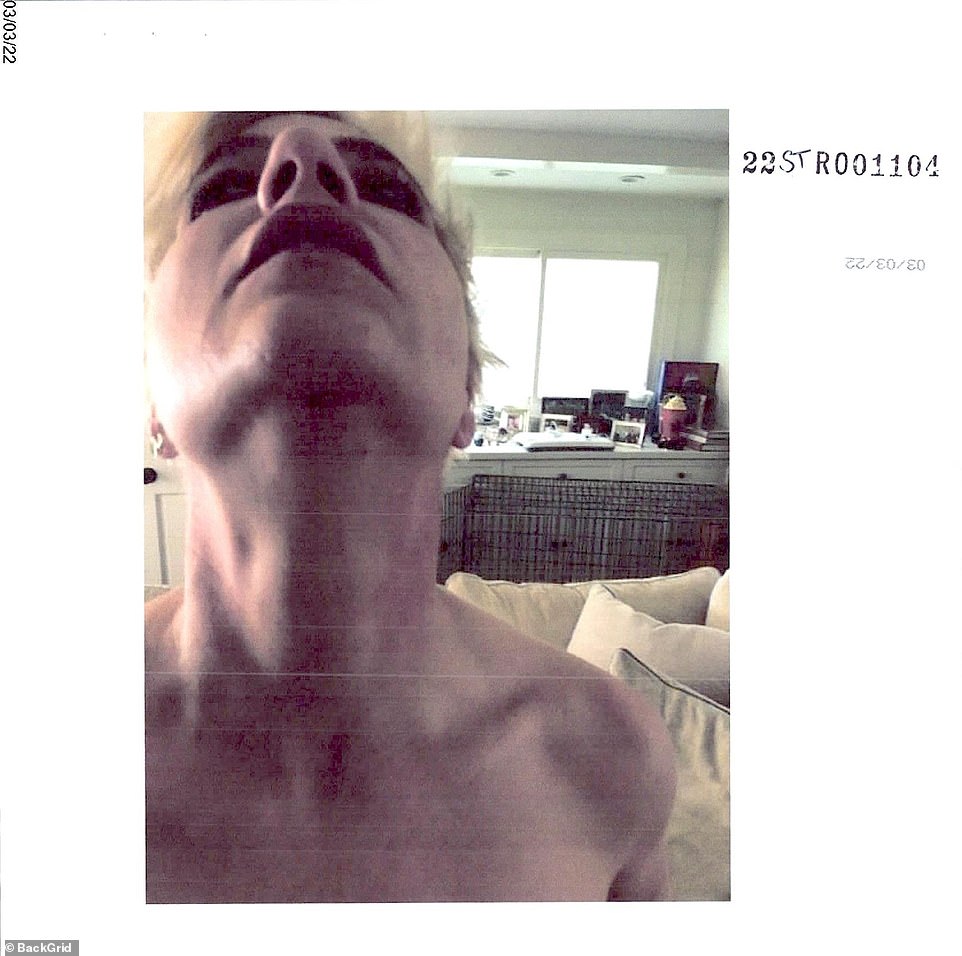 Disturbing: Blair, 49, included pictures that appear to document injuries she received after Carlson allegedly attacked her at her home on February 22 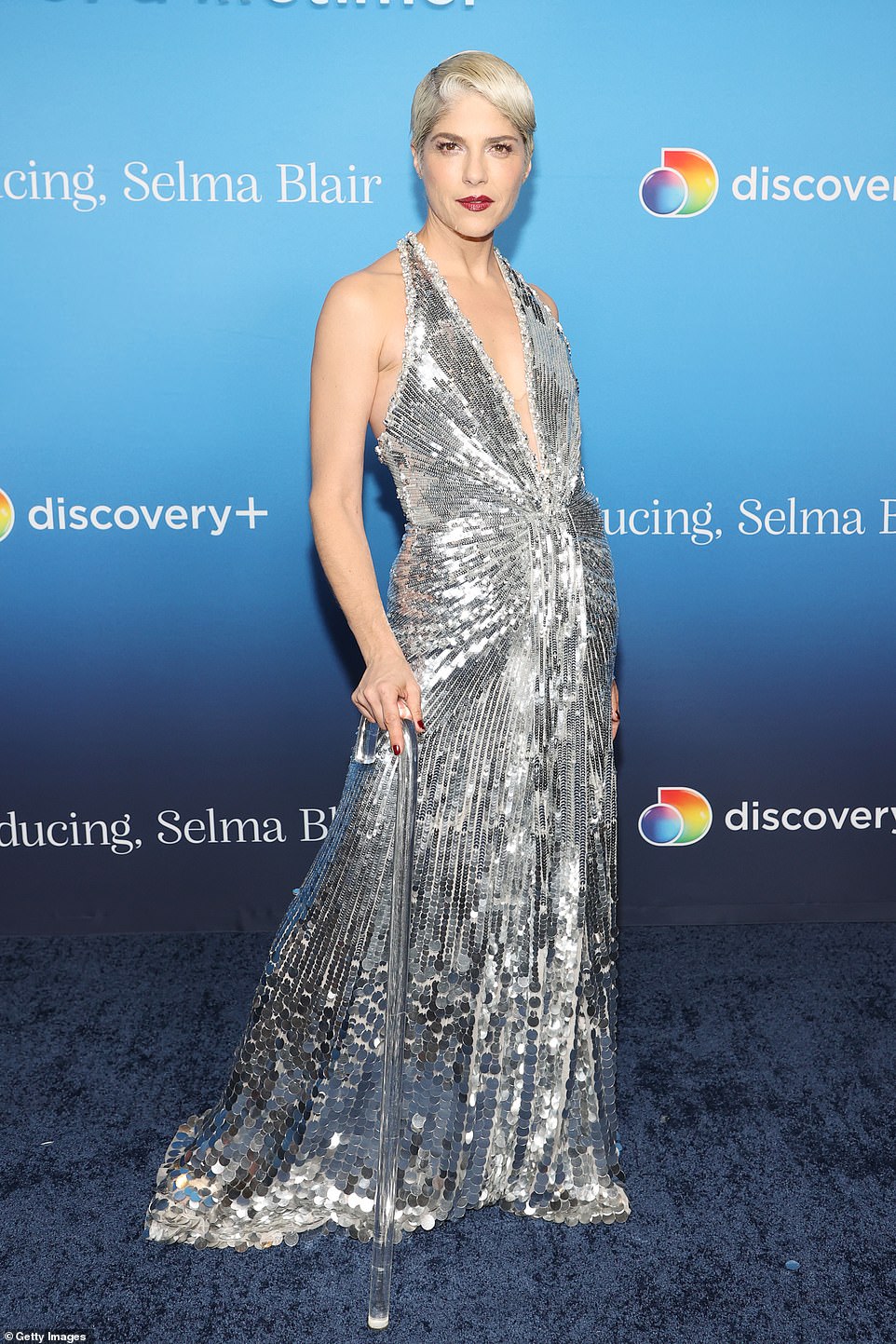 Court victory: The Hellboy actress was able to obtain a restraining order against Carlson, whom she claims tried to strangle her during an altercation at her home on February 22; seen in October in LA

Blair alleges the incident occurred on February 22 after they had recently ended their long-term relationship, according to legal documents obtained by TMZ.

Following an argument, the Cruel Intentions star claims that Carlson lunged at her, jumped on top of her body and began to strangle her.

Carlson has denied the claims and has filed a petition for his own restraining order against the actress.

In the legal docs, Blair — who battles multiple sclerosis — alleges that Carlson ‘strangled her, throttling her and shaking her head and shoulders aggressively’ while she was lying on her sofa. 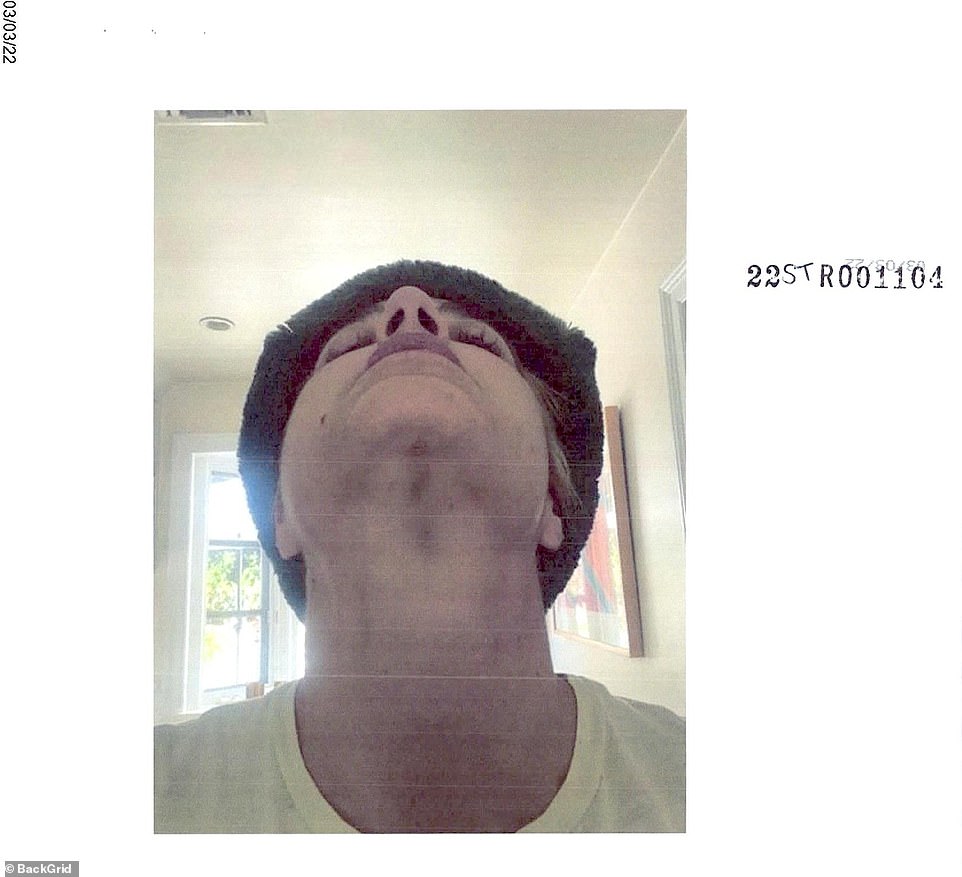 Marked up: Another view from the front with better lighting emphasizes what looks like a line of dark bruises extending from below her chin down to her throat as she tilts her head back

The report claims that Blair had been medicated at the time of the alleged attack due to her ongoing illness and told Carlson that she had not been feeling well.

Carlson had reportedly arrived at Blair’s home to return a television set when he allegedly became violent and frustrated with her.

She alleges he screamed at her, raging: ‘You f**ked up, you can’t do anything, you can’t love anybody, you’re f**king useless, you cripple.’

The Legally Blonde star alleges that he added: ‘I don’t f**king deserve this, I can do so much better than you.’

Blair further details the incident in legal docs, claiming that she stuck her fingers into his eyes and mouth, and Carlson responded by covering her face and mouth with his hands.

She alleges at this point she lost consciousness as she was unable to breathe. 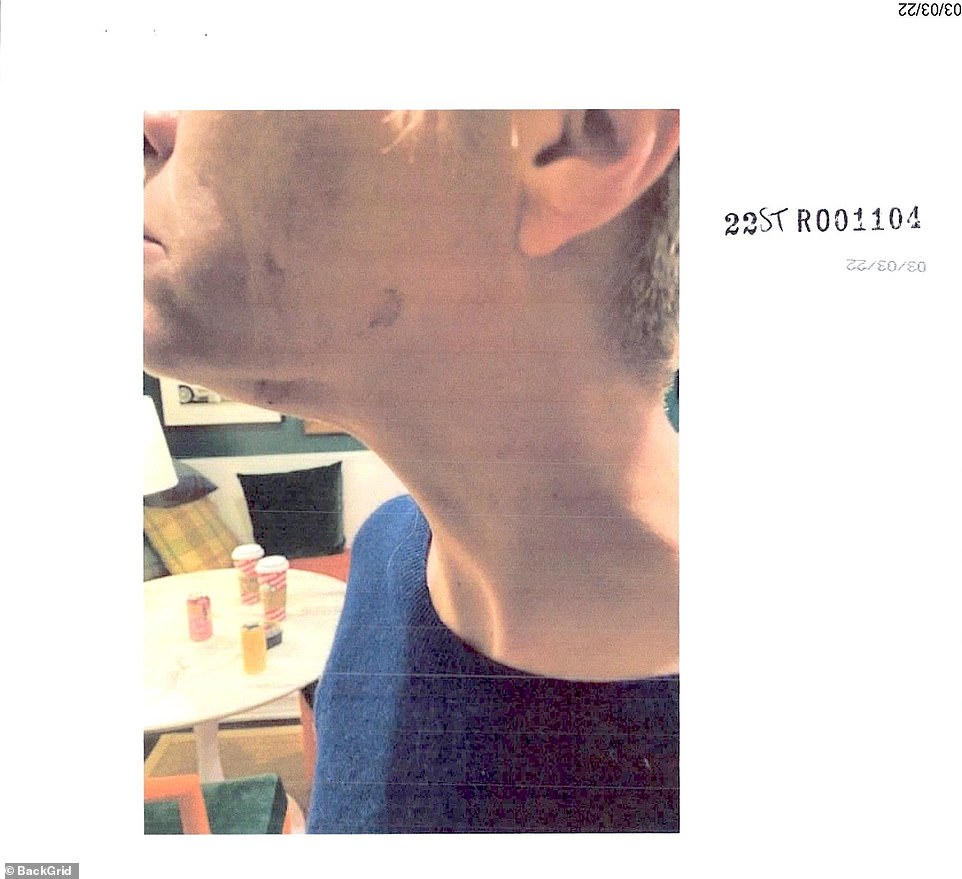 Alleged injuries: One photo taken from the side of Blair’s face seems to show more bruising, along with dark marks that may be bloodied scratches

When police officers arrived at the scene and interviewed the actress, she claims her nose began to bleed heavily and she once again lost consciousness.

Paramedics then decided to take Blair to a hospital to evaluate her condition, the report claims.

Carlson was arrested for felony domestic violence with corporal injuries.

Police officers are said to have obtained a five-day restraining order against Carlson following the attack, keeping him from going in close proximity to Blair.

The actress then obtained a temporary restraining order through her attorney.

In response, Carlson filed a petition for his own restraining order against Blair, fifteen days after the incident. 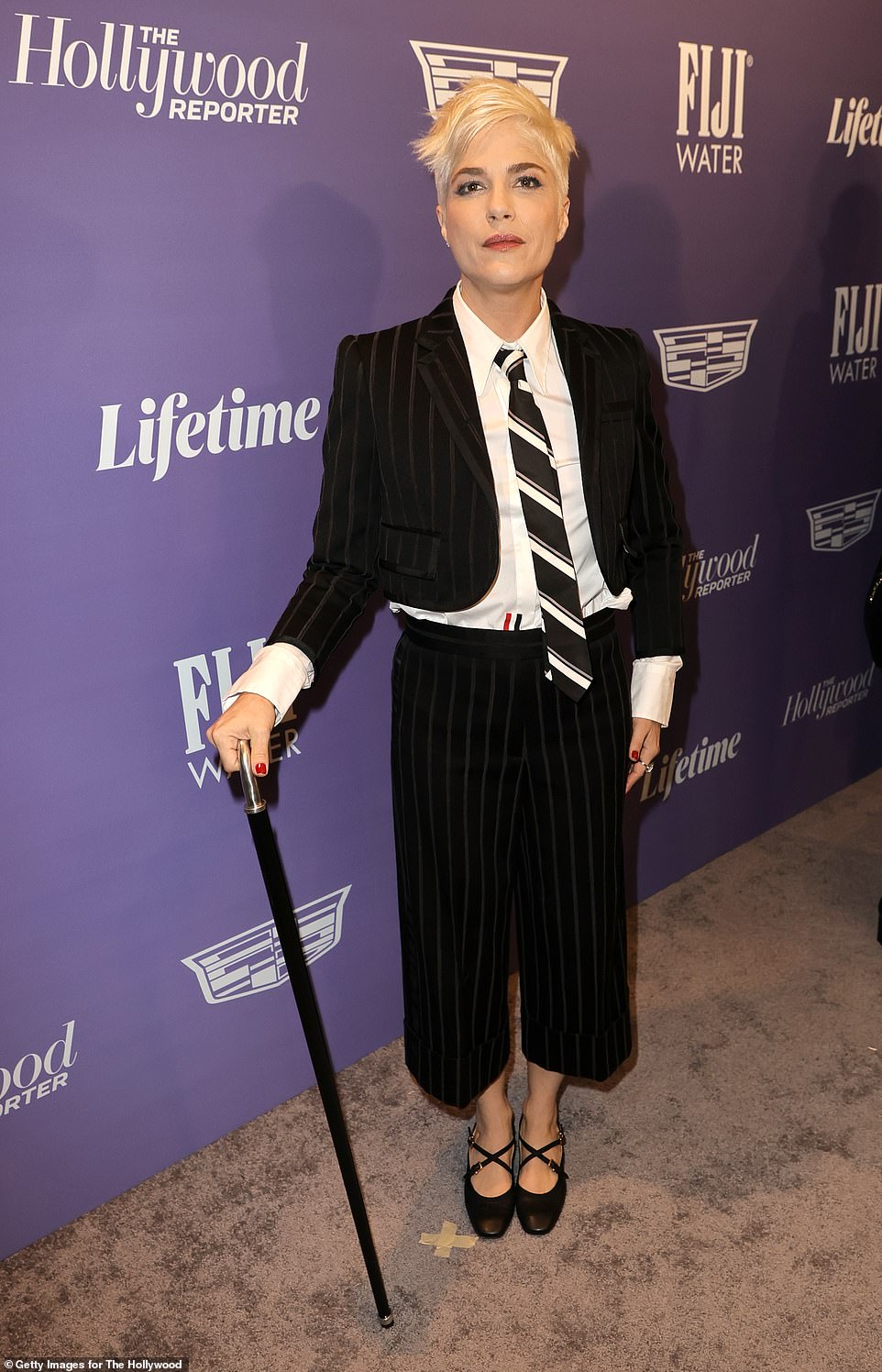 Ordeal: Following an argument, Blair — who battles multiple sclerosis — claims that Carlson lunged at her, jumped on top of her body and began to strangle her (Pictured last year)

In his version of events, Carlson claims that he was at her home when she had asked him to sit with her.

Carlson alleges that Blair became ‘angry and antagonistic’ when he declined to sit with her, and claims she got in his face and said, ‘Your daughter is a f***ing loser.’ According to the Los Angeles Times, Blair got upset that he wanted to end their relationship.

Blair has a 10-year-old son, Arthur, who she shares with with ex Jason Bleick, while Carlson has a 12-year-old daughter from a previous relationship. 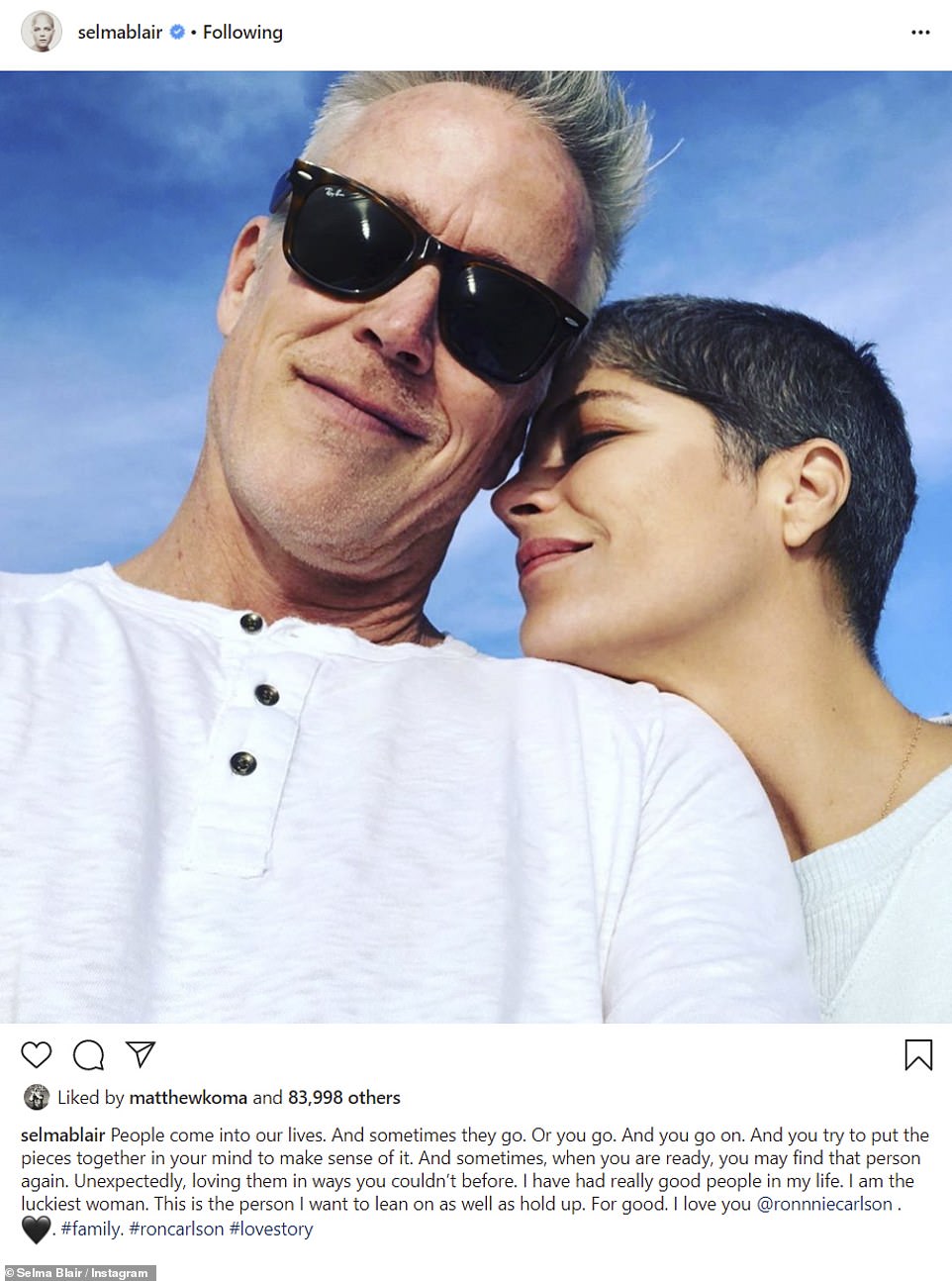 In happier times: In a January 2020 post the Cruel Intentions star praised her ex-boyfriend

Blair’s ex then claims that she swung at him and struck him in his eye and attacked with both arms.

He alleges that Blair scratched him on the nose, eyes and cheeks.

He has denied attacking her and says that he only reached for her out of defense.

Carlson claims that her bloody nose is part of a long-term medical issue and provided a text message as proof.

According to the Los Angeles Times, Carlson and his daughter were both granted a temporary restraining order against Blair.

‘I defended myself against Selma’s attack, but I did not intentionally strike her or cause her any harm,’ Carlson wrote in his application, which was also filed with the Superior Court, according to the LA Times. 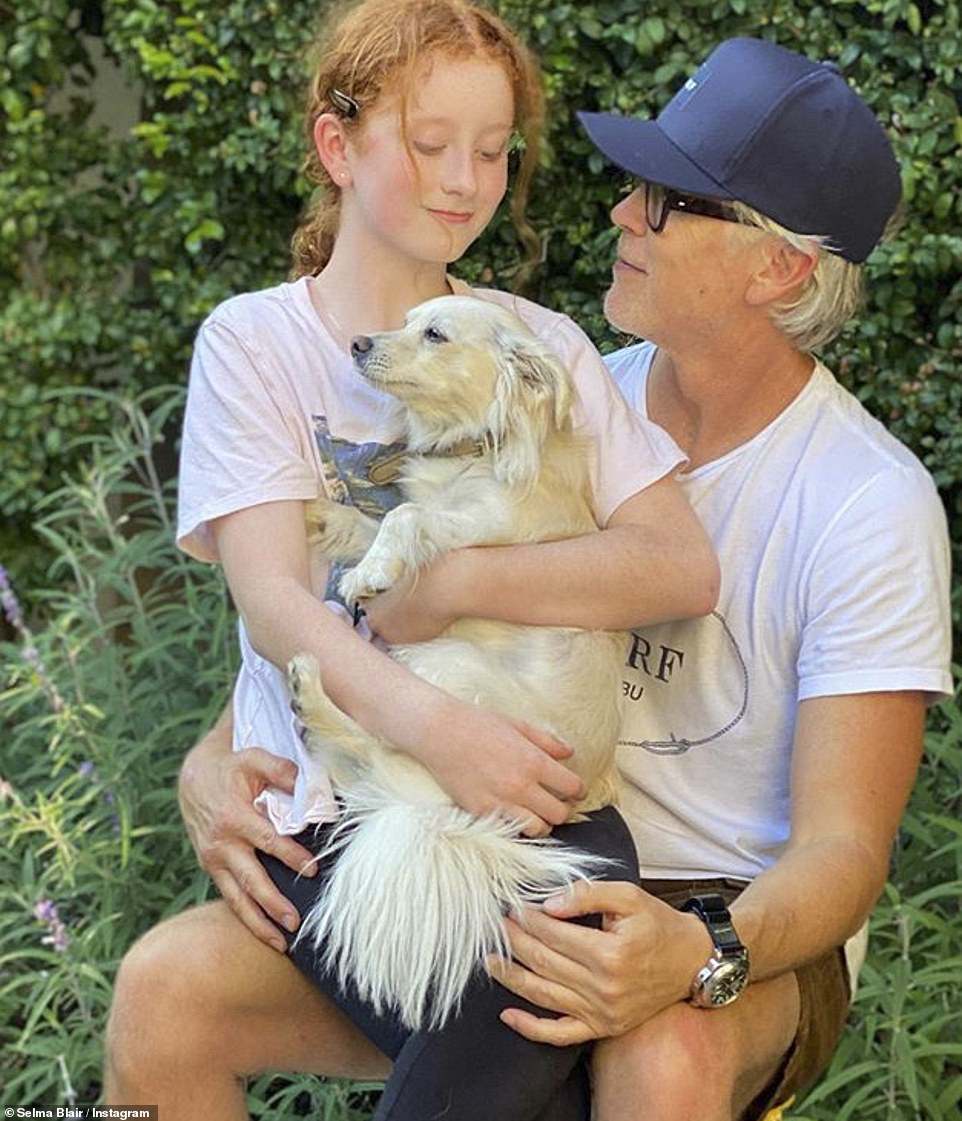 Family man: Blair shared this picture of Carlson and his daughter in 2020

‘[E]ven through Selma was the aggressor and the one who initiated the attack, and I was the victim, she called the police after I left her home and falsely claimed that I had attacked her,’ the document read.

Carlson is set to be arraigned on criminal domestic charges on June 22, according to the Times, citing his filing.

According to his filing, Carlson claimed he only spent ten minutes inside Blair’s home and did not contact her anymore that day.

The filing says he woke up at 11PM by the sound of police officers knocking at his door. His daughter woke up as Carlson was being arrested. Carlson was ‘mortified’ she witnessed the arrest.

‘My face was sore for a few days, as I estimate I was struck at least 5 times,’ he said, including images of the scratches on his face. 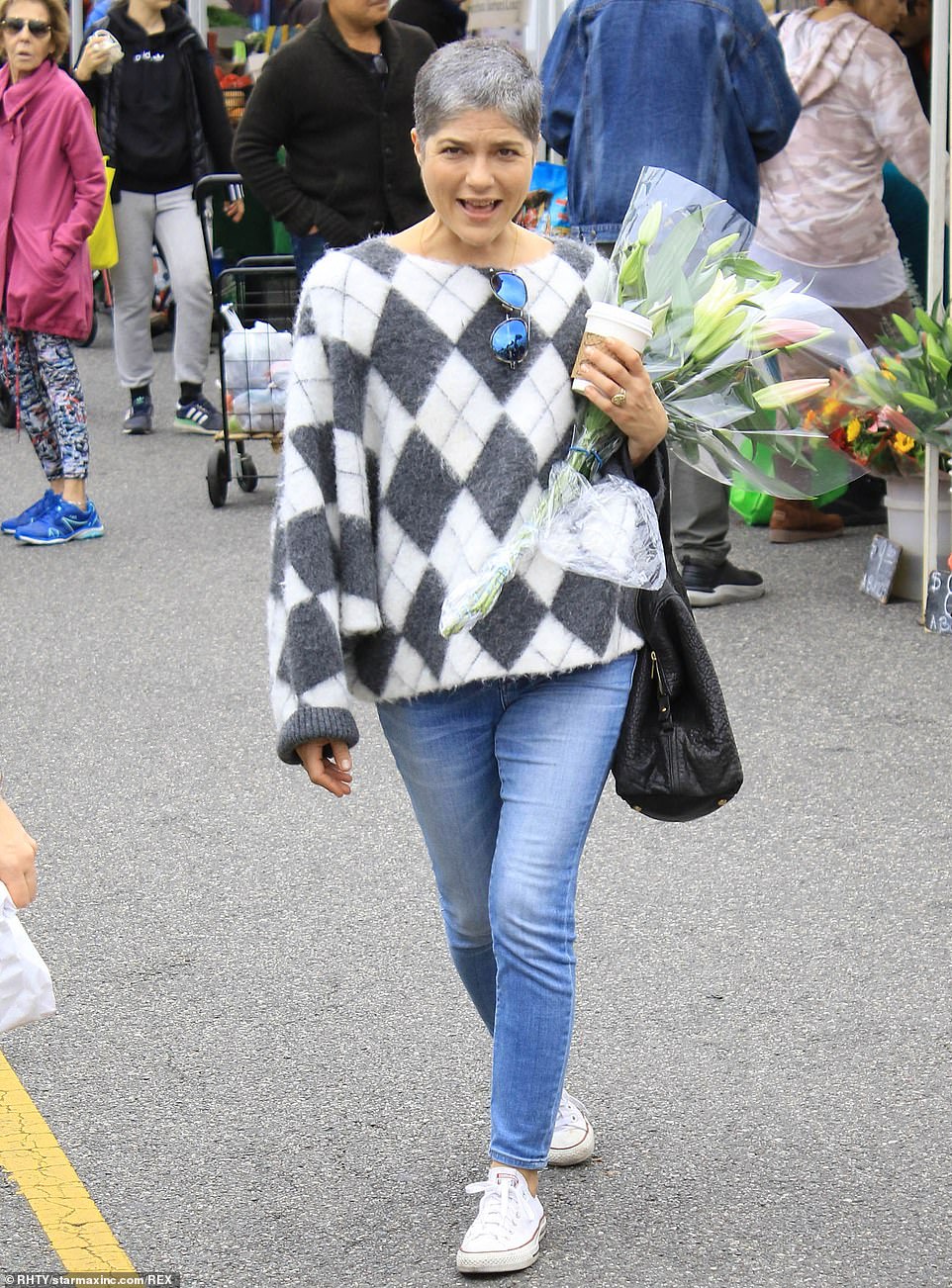 Health battles: Selma – pictured above in 2019 – has been open about her struggle with multiple sclerosis

Carlson also accused Blair of ‘taking Adderall and another drug to control mood swings and said she consumes cannabis,’ writes the LA Times. He also claimed Blair attempted to manipulate his daughter through text message and had even reached out to his ex-wife and manager, according to his filing.

‘A hearing on making the temporary orders permanent is scheduled for March 22,’ writes the LA Times.

Blair went public with her autoimmune disease diagnosis in October 2018.

In August last year after receiving stem cell treatment, Blair revealed that she was currently in remission.

MS sufferers who undergo treatment will go through periods of relapses and remissions.

The actress has been dealing with debilitating symptoms from the disease, including difficulty in speaking, and losing the ability to use her left leg fully, resulting in her using a cane to walk. 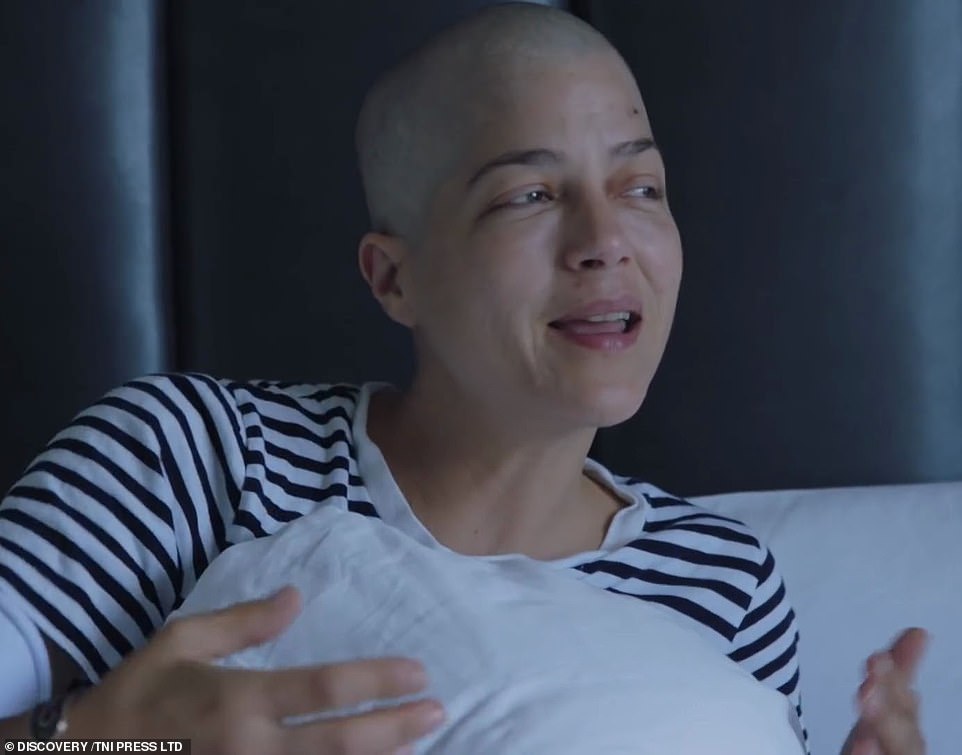 Battle: Last year, Blair revealed she underwent an ‘aggressive’ course of chemotherapy to treat the disease and restart her immune system (pictured above in her documentary)

In her recent documentary about her struggles, Blair said how an MS diagnosis can be ‘isolating’ but was determined to get through it for her son Arthur.

‘I was so burnt out. If there was an option to halt me, to rebalance after being hit so hard with that last flare, it’s absolutely for my son. I have no desire to leave him alone right now.’

The Cruel Intentions star also praised the wealth of support she received from her friends and family.

‘People took great care of me. I never really like life. I do now – strange, huh?’ she went on. ‘Just because life’s so weird. I was so scared in life. To suddenly start to find an identity and a safety in me, to figure out boundaries, time management and energy. I’m having the time of my life.’

What is multiple sclerosis (MS) and what are the symptoms?

MS is a condition that can affect the brain and spinal cord, causing a wide range of potential symptoms, including problems with vision, arm or leg movement, sensation or balance.

The immune system attacks the protective sheath (myelin) that covers nerve fibers and causes communication problems between your brain and the rest of your body.

It’s a lifelong condition that can sometimes cause serious disability, although it can occasionally be mild.

A study of the incidence of MS, developed in conjunction with Public Health England (PHE), estimates that 18% of total MS diagnoses in the UK are in people age 30 or under. This is compared to the previous estimate of only 12%.

There are 130,000 people living with MS in the UK and, in the last year alone, the charity estimates more than 1,250 people under 30 have been diagnosed. It is the most common progressive neurological condition in young people today.

When diagnosed with MS, no one can predict how the condition will affect you, how disabled you will become, or how quickly, and tens of thousands of people still have no treatment to help as their MS advances.