Rose Byrne and Seth Rogen served up plenty of laughs when they teamed up for the hit comedy Neighbors (2014), and again in the sequel Neighbors 2: Sorority Rising (2016).

And the duo are back together again, only this time they’re starring in the new Apple TV+ comedy series Platonic.

And on Friday they were spotted shooting a scene where they chow down on pizza at a bar in Downtown Los Angeles. 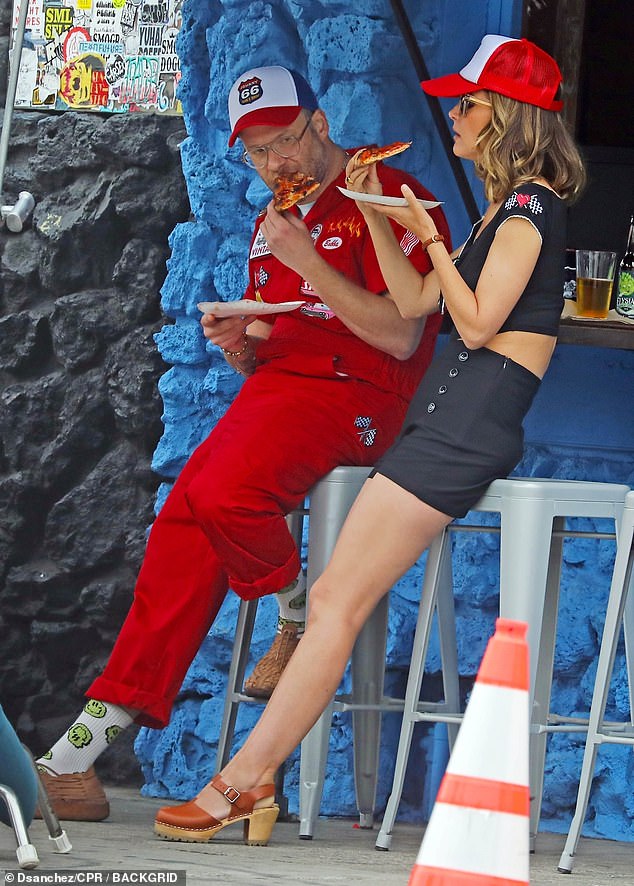 Together again: Seth Rogen and Rose Byrne were seen chowing down on pizza while shooting a scene from the new Apple TV+ comedy series Platonic

From the looks of his red staff jumpsuit, Rogen’s character works at a restaurant called Johnny 66 Bar And Grill.

To go along with his jumpsuit, the costume department also had him dressed in a matching baseball cap with the company’s name on the front and a pair of brown shoes.

For the scene, Rogen is leaning back on a bar stool eating pizza alongside Byrne, who was also wearing a Johnny 66 Bar And Grill baseball cap.

She was dressed in an all-black ensemble that consisted of black shorts and a matching crop top which showcased her toned midriff. 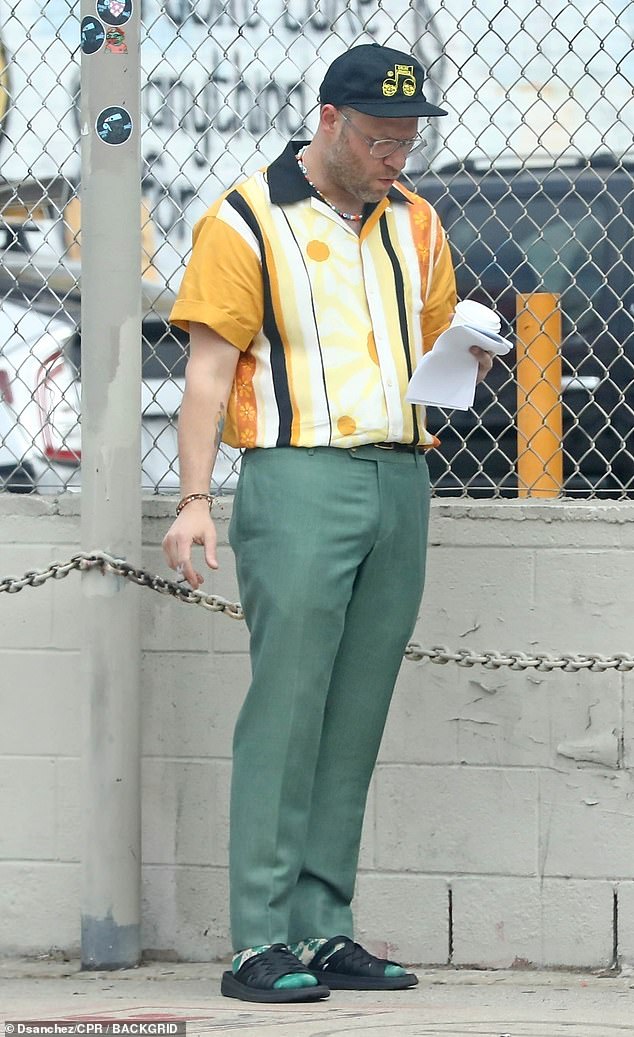 Smoke time: Rogen, 40, slipped away for some alone time near the street so he could look over his lines

Both Byrne and Rogen, who are also serving as executive producers along with Francesca Delbanco, Nick Stoller and Conor Welch, were later spotted getting prepared for another scene.

Rogen, 40, slipped away for some alone time near the street so he could look over his lines.

He was decked out in green slacks, a multi-colored shirt, sandals and a black baseball cap. 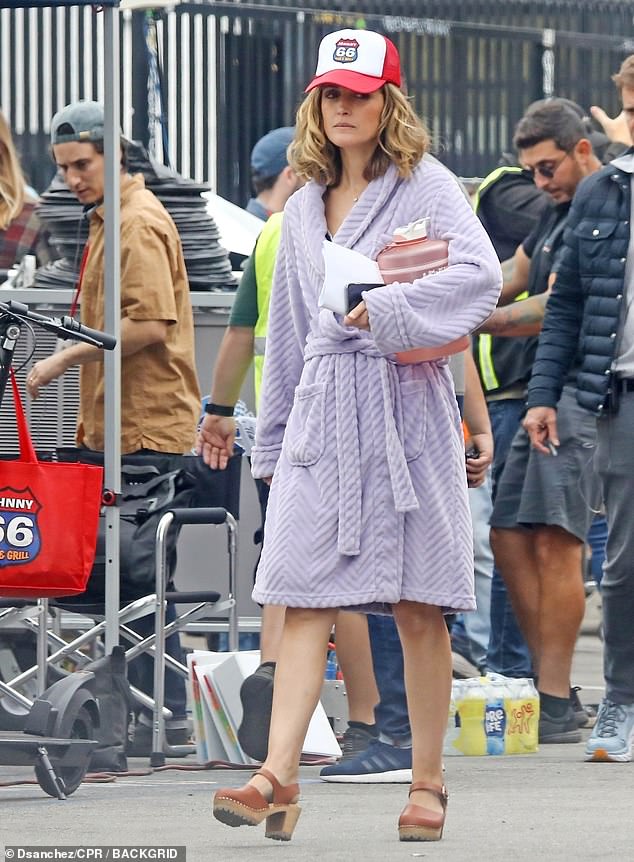 BTS preps: The Australian actress wore a purple robe before changing into her costume

Eventually Rogen made his way back to the series’ basecamp, where Byrne was hadn’t yet slipped into her ensemble for the next scene.

Wearing a purple robe and the same red and white baseball cap, the Australian actress looked to be carrying a large water container, presumably back to her trailer so she could get changed into her next costume

Joining them as part of the main cast are Luke Macfarlane, Trey Hale, Carla Gallo and Andrew Lopez.

The shoot for the series, which will consist of 10 half-hour long episodes, only just began earlier in May, with production taking place in Los Angeles. 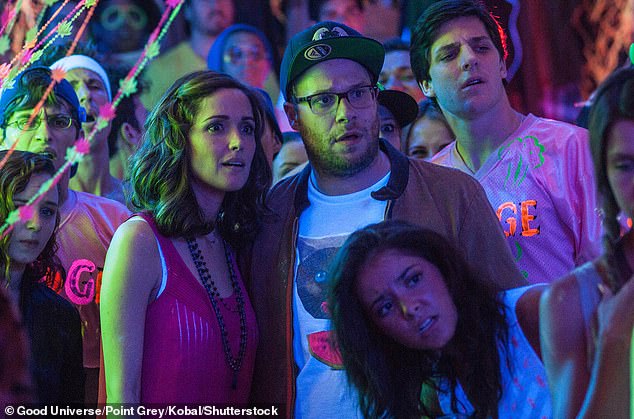 Bonafide hit: The first time Byrne and Rogen teamed up for Neighbors, the film was a big hit at the box office, earning $270.7 million at the world wide gate on just an $18 million budget

The comedy was created by Francesca Delbanco and Nick Stoller, who’s also helming the series.

So far, there’s no official word on when Platonic will be making its premiere on Apple TV+.

The first time Byrne and Rogen teamed up for Neighbors, the film went on to become a big hit at the box office, earning $270.7 million at the world wide gate on just an $18 million budget.

The sequel Neighbors 2: Sorority Rising wasn’t as big of a hit, but it still was a money-maker, grossing $108.8 million on a $35 million budget. 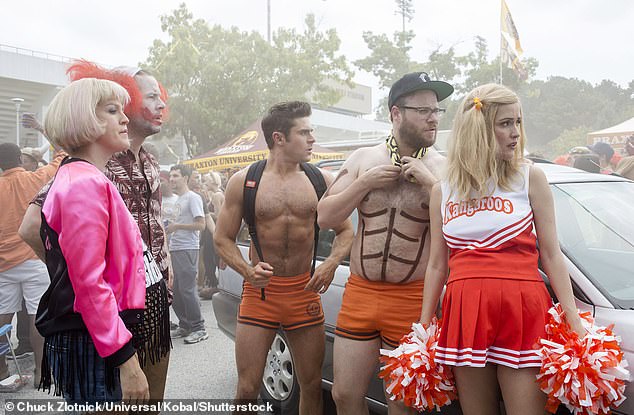 Sequel: The duo’s return for Neighbors 2: Sorority Rising wasn’t as big of a hit, but it still was a money-maker, grossing $108.8 million on a $35 million budget; Byrne and Rogen are pictured with co-stars Carla Gallo, Ike Barinholtz and Zac Efron