Boris Johnson was left wounded yesterday after more than four-in-ten of his MPs voted to depose him as Conservative Party leader. The Prime Minister responded by vowing to move on from the internal political factionalism which has gripped the Tory Party since initial partygate reports hit the frontpages last December.

He said: “I think it’s a convincing result, decisive result and what it means is that as a Government we can move on and focus on the stuff that really matters to people.”

However, Mr Johnson has already been warned by a former Tory leader to resign following the “devastating” confidence vote.

Former Foreign Secretary William Hague, who led the Conservative Party to an electoral drubbing at the hands of Tony Blair’s New Labour in 2001, penned a piece in the Times in which he suggested Mr Johnson’s position was no longer tenable.

Mr Hague said: “The nature of their revolt has an important bearing on what happens next.

“They represent instead a widespread feeling, a collapse of faith, that almost certainly cannot be repaired or reversed.

“For Johnson, continuing to lead the party after such a revolt will prove to be unsustainable.”

Hague did not face a confidence vote during his four year vote as Tory leader.

JUST IN: ‘Put it behind us!’ Boris vows to ‘unite’ Tory Party after narrowly seeing off rebels 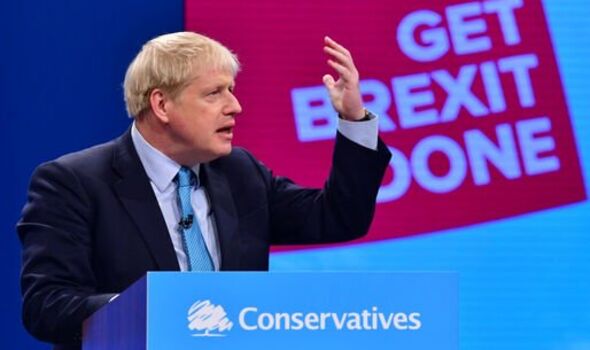 Mr Hague said: “The nature of their revolt has an important bearing on what happens next.” (Image: Getty)

However, his successor, Brexiteer Iain Duncan-Smith, soon would be defeated in a similar ballot after Conservative colleagues suggested the future Work & Pensions Secretary lacked charisma.

Hague added: “The nature of this particular revolt makes it qualitatively as well as quantitatively devastating.

“A fairly narrow victory for Boris Johnson is not the defeat of a rival faction, or the squashing of an alternative candidate, but rather the fending-off of a gathering feeling of hopelessness.

“It is less likely to prove a turning point than a way marker on an exhausting road to further crises of confidence.

“That is the worst possible result from the Conservative Party’s point of view.

“Logically, they should either reconcile themselves to Johnson and get behind him, or decisively eject him and move on to a new leader.

“It does not seem they have done either.”

The Prime Minister appeared defiant after he prevailed in his confidence vote yesterday. (Image: Getty)

Jeremy Hunt said: “We are set to lose the next general election.” (Image: Getty)

However, in his damning assessment of the Prime Minister’s situation, Mr Hague continued: “While Johnson has survived the night, the damage done to his premiership is severe.

“Deep inside, he should recognise that, and turn his mind to getting out in a way that spares party and country such agonies and uncertainties.”

Despite words of advice from Mr Hague, the Prime Minister appeared defiant after he prevailed in his confidence vote yesterday.

Mr Johnson even appeared to turn his attention away from internal party management towards dealing with the cost of living crisis, NHS backlogs and levelling-up the United Kingdom.

The Prime Minister also told MPs at yesterday’s 1922 Committee meeting: “We have the chance to stop talking about ourselves and start talking exclusively about what we are doing for the people of this country.

“And instead of getting into some hellish Groundhog Day debate about the merit of belonging to the Single Market, relitigating questions that we settled two-and-a-half years ago, we can get on, we can deliver, and we can unite.

“And you all know what an incredible force we can be when we are united.”

He added: “And my friends, there is simply no way Labour can match this programme. They are still in the pocket of the union barons.

“They want to keep us locked into EU regulations. And though they may live in great stuccoed townhouses in north London, they deplore the dream of home ownership for everyone but themselves.

“They would never have taken the decisions this Government took to help the Ukrainians.

“They would never have stood up to Putin, not when eight of their frontbench voted to scrap our independent deterrent.

“They would be an utter disaster in office, forced to erode our precious union by an alliance with the SNP.

“And the only way we will let that happen is if we were so foolish as to descend into some pointless fratricidal debate about the future of our party, when frankly there is no alternative vision that I am hearing.”

However, Mr Hague’s advice has not been the first afforded to the Prime Minister.

Mr Johnson’s former chief Brexit negotiator Lord David Frost provided the Prime Minister with advice on how he could take back control of his premiership.

Lord Frost, who resigned from Mr Johnson’s Government last December, said: “If the Prime Minister is to save his premiership and his Government he should now take a different course – bring taxes down straightaway to tackle the cost of living crisis, take on public service reform, and establish an affordable and reliable energy policy for the long term.

“I hope the Prime Minister will now head rapidly down this path and refresh the Government to achieve it.

“If he does, I believe he can and will re-establish a sense of direction and restore confidence among the party and our present and future voters – and thereby protect Brexit too.”