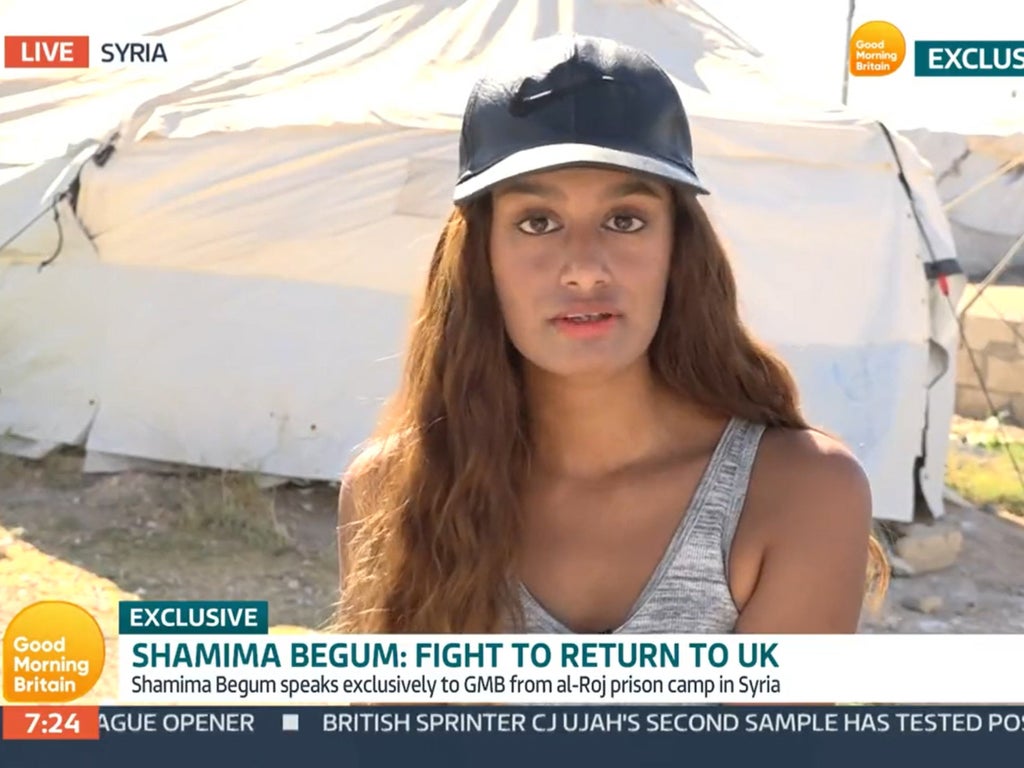 Shamima Begum has begged the British people for forgiveness, saying there is “no evidence” she was a key player in preparing terrorist acts and is prepared to prove her innocence in court.

The 22-year-old, from east London, has had her British citizenship revoked by the Home Office on national security grounds, and is currently living in a camp in Syria.

It comes after she travelled with two other schoolgirls to Syria to join Isis in 2015.

In her first live TV interview, the former Isis bride told ITV’s Good Morning Britain she could be “an asset” in the fight against terror, saying she had been “groomed” to flee to Syria as a “dumb” and impressionable child.

She also said she was “pretty sure” Sajid Javid would change his mind about her citizenship if the pair met face to face.

But the health secretary defended the decision to revoke Begum’s citizenship as “absolutely right” and hit back at her claims that she played no part in Isis terrorism.

Sajid Javid hit back at Shamima Begum’s claims she played no part in Islamic State terrorism.

Referring to his decision while home secretary to strip Begum of her British citizenship, the health secretary said: “I won’t go into details of the case, but what I will say is that you certainly haven’t seen what I saw.”

He added: “If you did know what I knew, because you are sensible, responsible people, you would have made exactly the same decision – of that I have no doubt.”

Shamima Begum has asked the British people for forgiveness, saying in a TV interview that the so-called Islamic State’s (Isis) killing of innocent people is “unjustifiable”.

The 22-year-old former Isis bride has had her British citizenship revoked by the Home Office on national security grounds, and is currently living in a camp in Syria after travelling there from her home in east London as a schoolgirl in 2015.

My colleague Lamiat Sabin has the full story:

Good morning and welcome to our live coverage as former Isis bride Shamima Begum, who left the UK for Syria as a schoolgirl in 2015, gives her first live TV interview.

Follow our rolling coverage throughout the day as we bring you the latest updates and reaction.

Roger Federer looking ahead after latest round of knee surgery