Shane Warne's coping mechanism before 'ball of the century': ‘I was nervous’

The Australian cricket legend, known for being one of the greatest bowlers of all time, has died aged 52 of a suspected heart attack. Warne was found unresponsive in his Thailand villa according to a statement from the mercurial star’s management company. MPC Entertainment said: “It is with great sadness we advise that Shane Keith Warne passed away of a suspected heart attack in Koh Samui, Thailand today, Friday March 4.

“Shane was found unresponsive in his villa and despite the best efforts of medical staff, he could not be revived. The family request privacy at this time and will provide further details in due course.”

Warne was a giant of cricket, with his tally of 708 Test wickets having been surpassed only by his rival and fellow spinner Muttiah Muralitharan.

He retired from a 15-year international cricket career in 2007, having been the joint-leading wicket-taker as Australia won the 1999 World Cup, and managed 293 one-day dismissals in just 194 matches.

Warne burst onto the international scene in the 1993 Ashes, where he bowled one of the “balls of the century” in his first delivery of the series. 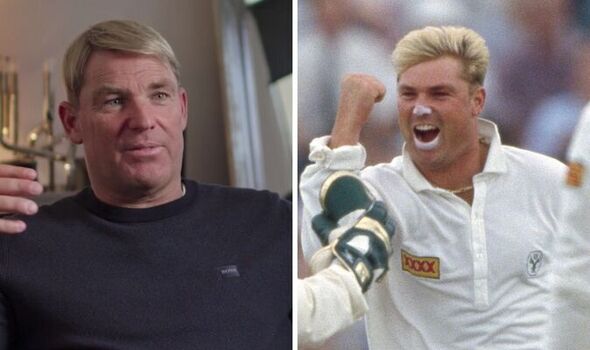 Warne had a strange way of calming his nerves before the Ashes (Image: Amazon Prime / Getty)

In Amazon Prime documentary Shane, the cricket star revealed he had a very specific way of settling his nerves before making his Ashes debut in Manchester.

He said: “I remember the night before the test match I sat in my room and I smoked about ‒ I don’t know how many cigarettes I smoked ‒ but it was a bit like a Cheech and Chong movie in my room.

“I was nervous. I’m getting a bit nervous with my hands now thinking about it.

Warne burst onto the scene in the 1993 Ashes (Image: Getty)

“I didn’t have a great night’s sleep to be honest.”

However, the next day Warne made a name for himself on the international stage by bowling out Mike Gatting with his first ball.

The drifting delivery to Gatting, which has been labelled the “ball of the century”, pitched outside leg stump, before turning sharply at the last, beating the England man’s bat and clipping the top of the stump.

Warne said: “Suddenly the thought of actually bowling my first ball in an Ashes series was a bit like ‒ woah.”

Warne revealed he had been smoking the night before the first Ashes test in 1993 (Image: Amazon Prime)

He added: “My thought process was, ‘Lets just bowl the ball and spin the ball as far as you possibly can and send a message to the England guys that this guy can spin it.’

“That was my thought process. Let them see it drift, curve, and just rip it.

“I’m nervous, then suddenly a hush goes around the ground. And I take a step, I bowl, and I let go of the ball, and then it’s all like it happened in slow motion.

“Gatting has tried to turn it. It drifted, he followed the drift, pitched, it just missed his bat [and] just clipped the top of off-stump.

Warne is one of the greatest bowlers of all time (Image: Getty)

“First ball in an Ashes series and I felt bloody pretty good.”

England would be in Warne’s crosshairs for many more Ashes series to come.

The Australian took 195 wickets at 23.25 with 11 five-fors and four 10-wicket match hauls against England.

There was also a respect between Warne and the old rivals with the cricket star representing Hampshire from 2000 to 2007.

In the Amazon documentary, Warne admitted that the first of his 195 wickets against England was “a fluke”.

He said: “It was a fluke because I never ever did it again.

“So you’d have to say it’s a fluke, but from that moment things changed.

“That changed my life, that ball.”