The spin king’s romance with the blonde bombshell was his last official and public relationship and ended in September 2014 after just three months of dating.

Scott posted a sweet picture of the pair on Instagram and recalled her ‘playful’ romance with Shane, describing him as her ‘friend and confidante’. 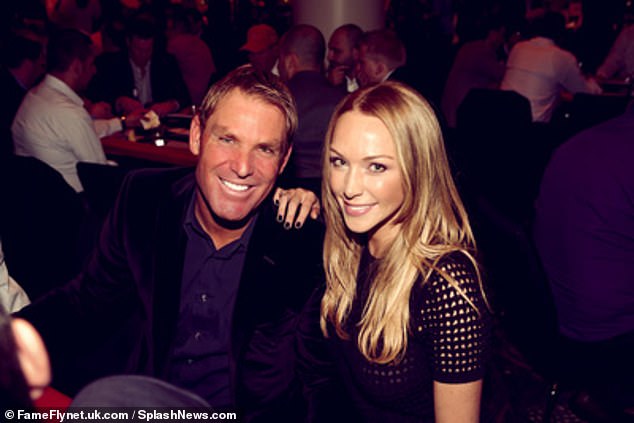 ‘We’d play. You were the most fun. Your kids, you were adorable with them,’ she said.

‘The loss feels too much. You gave the gift of your light, numerous memories, and I’ll always treasure them.’ 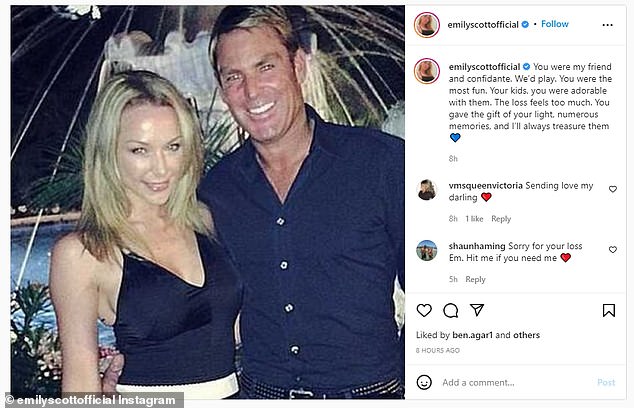 Scott posted a sweet picture of the pair on Instagram and recalled her ‘playful’ romance with Shane, describing him as her ‘friend and confidante’

Although the pair were first pictured together in May that year, it wasn’t until June that the couple confirmed their romance.

While the relationship was relatively brief there was still the opportunity for scandal after Shane was pictured in London with Sophie Monk in July.

Months after being snapped together Sophie appeared to confirm that the couple had kissed, while Shane strongly denied the allegations. 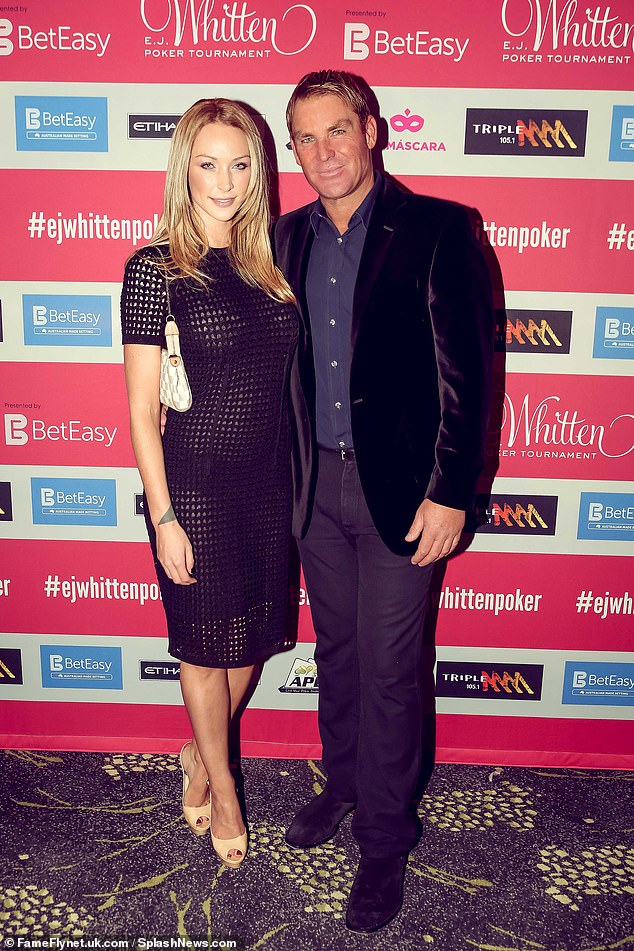 Short-lived but sweet: The spin king’s romance with the blonde bombshell was his last official and public relationship and ended in September 2014 after just three months of dating

Seemingly in a response to Shane’s denial Sophie tweeted: ‘I don’t lie’.

In 2017, the cricketer took to Twitter to clear up swirling rumours of his colourful love-life, writing: ‘I’ve been single for 3 years & not dated anyone or been on 1 date in that time.’

‘I’m lucky to have 3 awesome children who look after me + great family & friends too. I’m also very grateful to Sky, Star & Ch 9 for the opportunity to work on something I love – Cricket ! Thankyou…. [sic],’ he added.

Before dating Scott, Warne was engaged to Elizabeth Hurley.

The couple first got together in late 2010, before Warne popped the question to the Austin Powers actress in September 2011, but they sadly split in 2013

He also had a 10-year marriage to former model Simone Callahan, whom he divorced in 2005.

Warne died from a suspected heart attack while holidaying with friends on the Thai island of Koh Samui on March 4.

There are now fears Covid may have played a part in Warne’s death after he contracted the virus twice just months apart.

Warne’s family reported he had been having heart troubles in the weeks leading up to his death, while it has also been noted he suffered from asthma and was also a heavy smoker.

Warne first contracted Covid in August last year while in England coaching the London Spirit and was placed on a ventilator to ensure he didn’t suffer any lingering effects of the virus.

Warne’s family, including his three children Jackson, Summer and Brooke, and friends gathered at Melbourne’s Essendon Airport on Thursday night as the body of the sporting icon returned home on a private jet, six days after his sudden death in Thailand.

Earlier on Thursday morning,  his coffin was draped in an Australian flag as the legendary cricketer began his final voyage home from Thailand, a journey that began before dawn.

A private memorial is expected to be held on March 20.

A state funeral will be held on March 30 at the Melbourne Cricket Ground, with as many of Warne’s fans as possible to be allowed to attend.