It’s been just under two weeks since Shawn Mendes announced he would be canceling his Wonder world tour, in order to get some much needed rest and focus on his mental health.

With his schedule now an open docket, and his 24th birthday coming up on Monday, the Canadian singer paired up with The Weeknd at a club in Miami shortly after The Blinding Lights star played Hard Rock Stadium.

A source told People Mendes had an ‘amazing time’ partying with The Weeknd during his surprise performance, and that he looked to be ‘in amazing spirits. 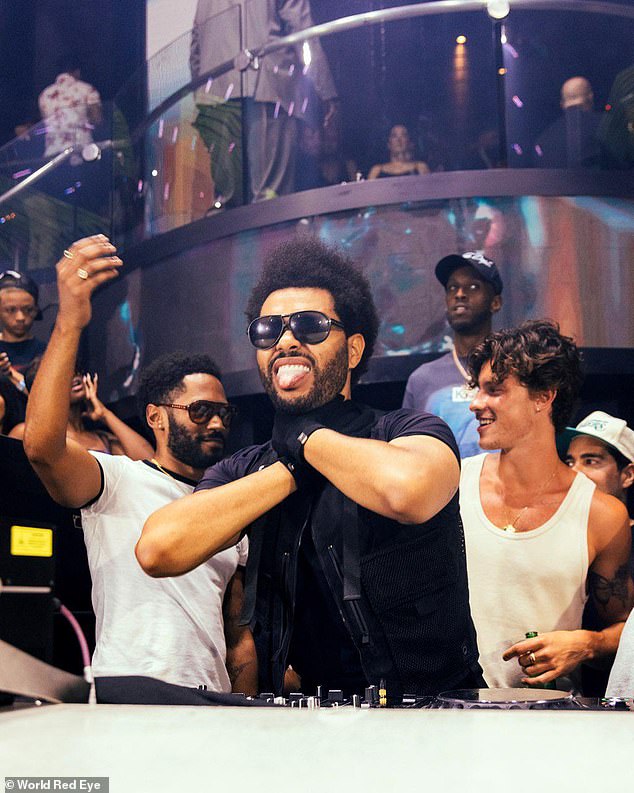 Party time: Shawn Mendes (right), who turns 24 on Monday, partied with The Weeknd at LIV Miami on Saturday after The Blinding Lights star rocked the house at Hard Rock Stadium

That insider went on to reveal how the It’ll Be Okay star ‘looked super happy to be there, relaxed and just enjoying the environment.’

Mendes and his friends ended up hanging out in the DJ booth with DJ Kaytranada, and then after The Weeknd (born Abel Makkonen Tesfaye) arrived from his show, the two joined him on stage.

The Pickering, Ontario, Canada native hung out in the DJ booth the entire night and seemed to be having a great time singing along to The Weeknd’s lyrics. 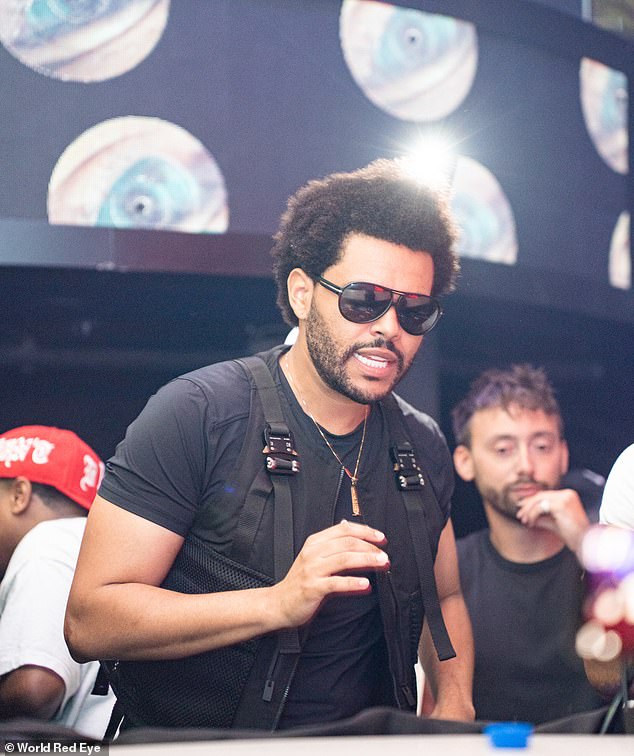 Rockin’ the house: Dressed in all-black, The Weeknd arrived at the club after his After Hours Til Dawn tour show and went straight to the DJ booth to hand with DJ Kaytranada and Mendes 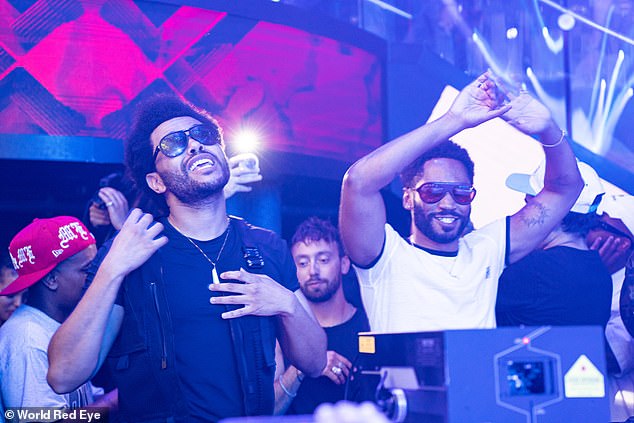 Clubbin’: The singer-songwriter was the center of attention alongside DJ Kaytranada 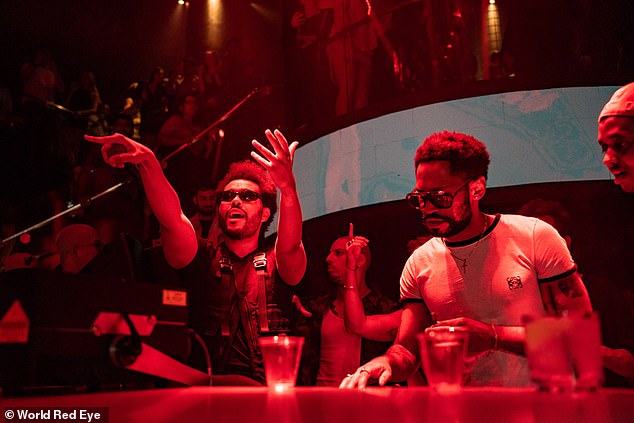 Soaking it in: Mendes stayed in and around the DJ booth the entire night singing along to The Weeknd’s lyrics during his surprise performance

The gig at Hard Rock Stadium was the eighth show of his ongoing After Hours Til Dawn tour, which is in support of his studio albums After Hours (2020) and Dawn FM (2022).

DJ Kaytranada is among the opening artists on the Starboy’s stadium tour, along with Swedish singer Snoh Aalegra and Mike Dean. Rapper and singer Doja Cat was originally set to be the opener in North America, but withdrew due to tonsil surgery.

Earlier on Saturday, before heading out to the club, Mendes enjoyed a relaxing time on the beach, where he showed off his toned abs by going shirtless in red swim trunks.

He would switch between laying out on the sand for some fun in the sun with friends and jumping into the gorgeous ocean water for a swim. 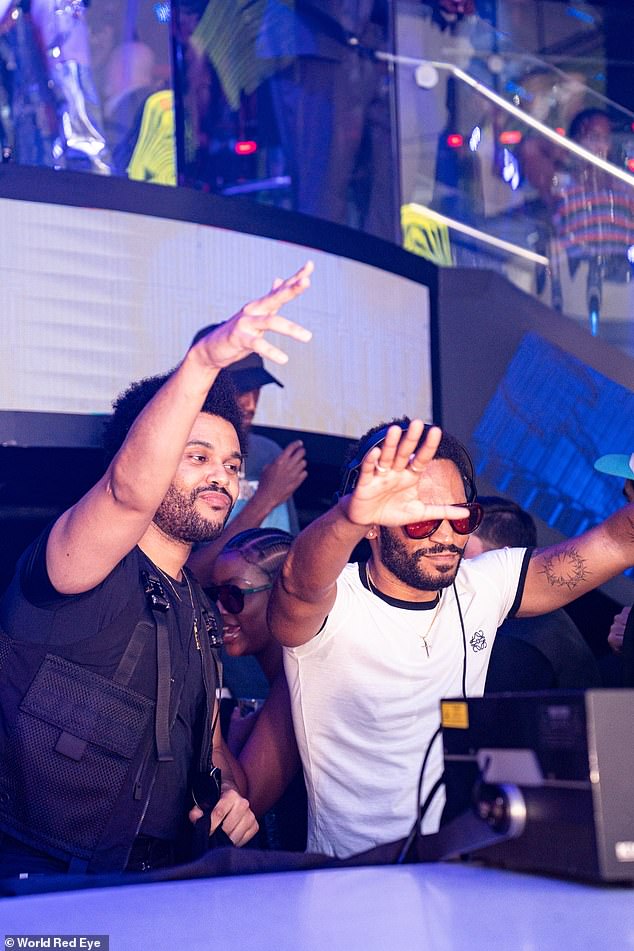 Out on the road: The Weeknd, 32, is currently out on the road on his After Hours Til Dawn tour of stadiums, which began in mid-July 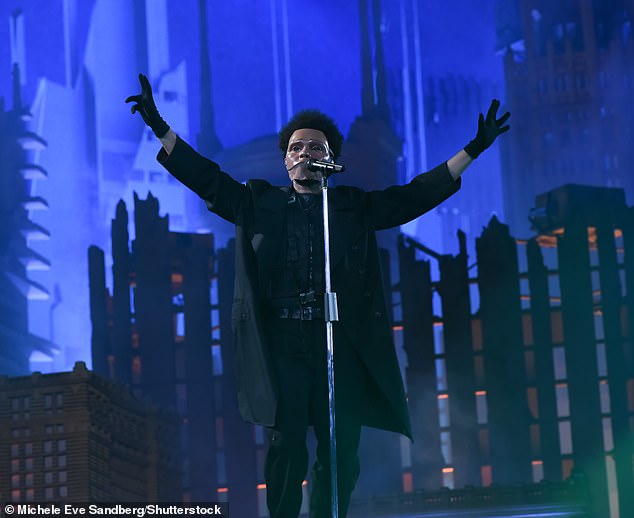 Before heading out to the club to party with Mendes and company, The Weeknd brought his world tour to Hard Rock Stadium in Miami

The Canadian star also took to his Instagram page and shared a couple of photos of himself lounging with his pals on the back of a yacht.

In one pf the pictures, he can be seen staring directly into the camera wearing only black shorts a green baseball cap on backwards.

On Sunday, after all the partying with The Weeknd, Mendes took back to Instagram and posted a closeup photo of himself sporting a bit of bed head, seeming after waking up following his long Saturday night that went into the morning hours. 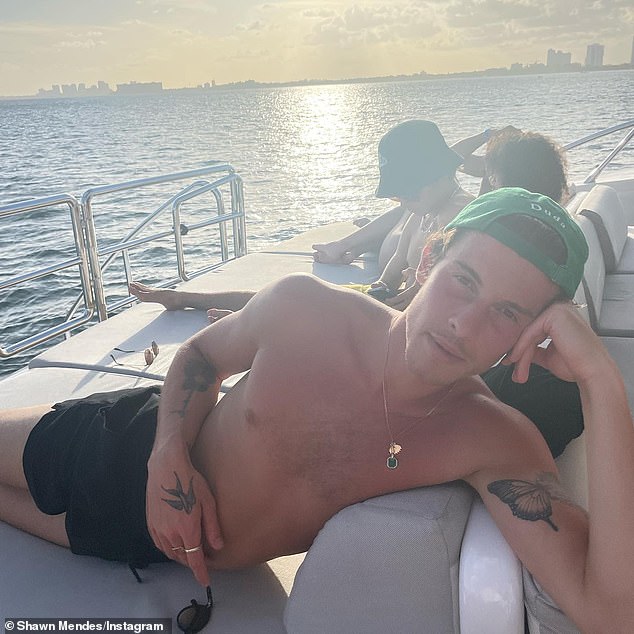 Relaxing: Earlier on Saturday, before heading out to the club, the pop star The Canadian star shared a couple of photos of himself lounging with his pals on the back of a yacht 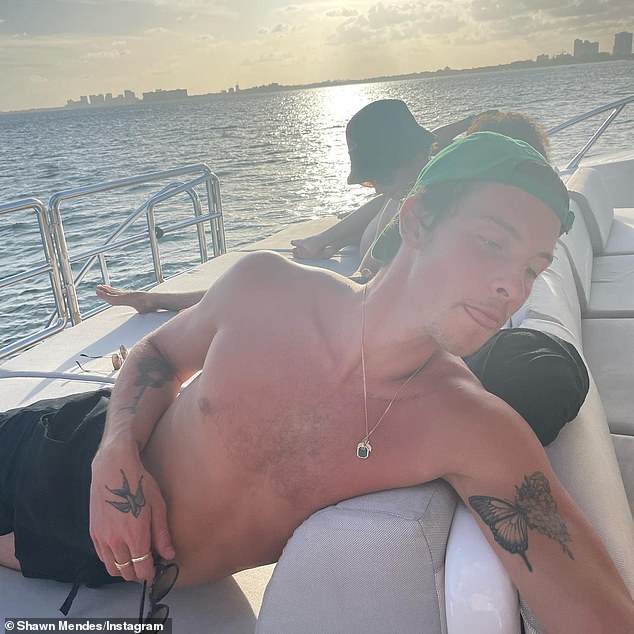 Summer lovin’: The Summer Of Love star went shirtless while hanging with his friends, which also included hitting the beach for a swim on Saturday afternoon

The Summer Of Love singer announced he was cancelling his world tour in a social media post on July 27 to focus on his mental health shortly after postponing three weeks of shows.

‘It has become more clear that I need to take the time I’ve never taken personally, to ground myself and come back stronger,’ he wrote in a statement, adding, ‘I unfortunately have to cancel the rest of the tour dates in North America, and the UK/Europe.’

He continued, ‘We were hopeful that I might be able to pick up with the rest of the dates after some much needed time off, but at this time I have to put my health as my first priority. This doesn’t mean I won’t be making new music, and I can’t wait to see you on tour in the future.’

He ended by thanking his fans for their support and ‘for sticking by me on this journey.’

A source told the publication that Mendes is ‘getting help’ for his mental health issues. 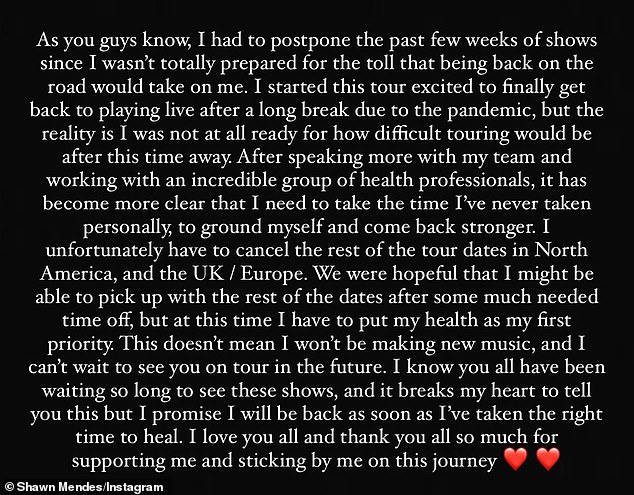 Time out: The Canadian singer-songwriter announced he was cancelling his world tour in an Instagram statement on July 27 to focus on his mental health 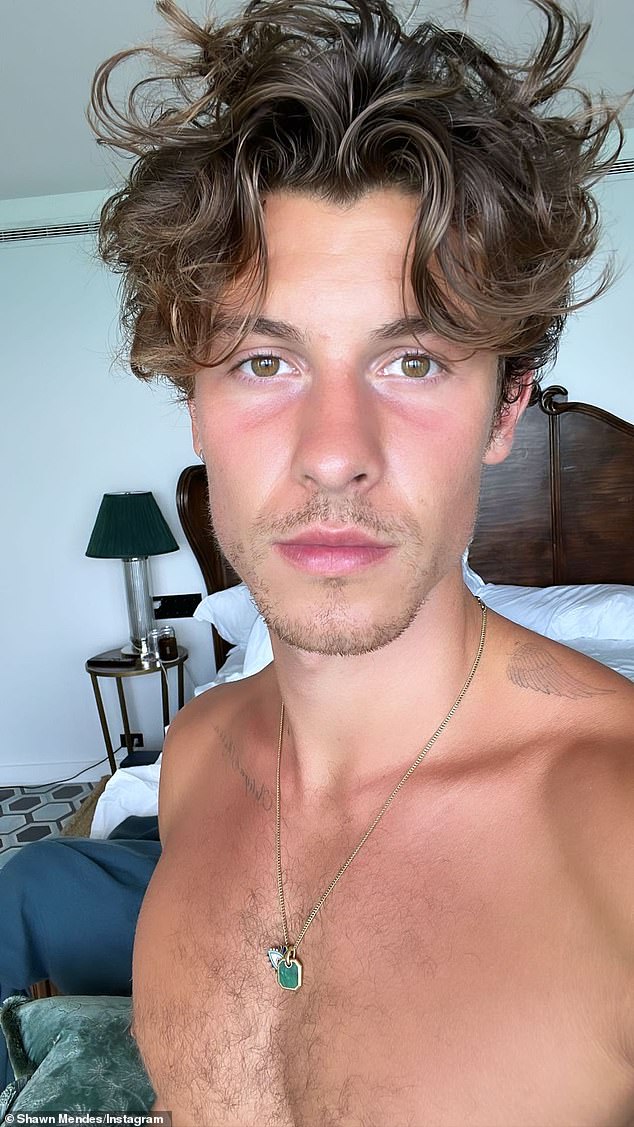 Bed head: Mendes also shared a photo of himself seemingly after waking up on Sunday after partying it up at the club with The Weeknd