Should you wait for savings rates to rise or lock your money away now?

Should you wait for savings rates to rise or lock your money away? Here’s why ‘FOMO’ over future higher rates could damage your returns

By Ed Magnus For Thisismoney.co.uk

Unlike easy-access savings deals, fixed rates require savers to surrender access to their money for the fixed term period.

This means once a saver commits to a fixed deal they can’t then change their mind and move money to another account without penalty. 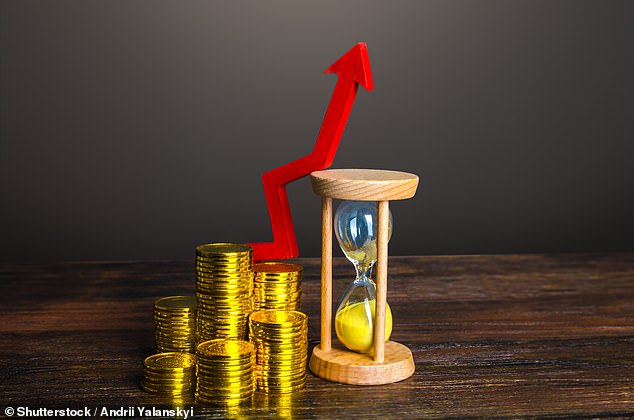 Fix or twist: Savers might be holding out for more rate rises, but is it wise?

With many expecting interest rates to continue rising in the short term, it is thought this may be causing some savers to play a waiting game in a case of ‘FOMO’ – fear of missing out.

However, the temptation to ‘wait out’ for further rate hikes may be negatively impacting savers returns.

For example, were someone to hold £10,000 for six months in the current best paying easy-access account paying 2.1 per cent and then fix, they would need the fixed deal to be paying almost 4.6 per cent over the next six months to replicate the interest they would have earned in 12 months by opting for the best 3.35 per cent deal now.

This suggests that for indecision to pay off, very large interest rate increases are needed.

Delay will be even more devastating for savers who have their money languishing in accounts paying 0.1 per cent or less.

According to Paragon Bank’s analysis, roughly a quarter of UK savings could be festering in accounts paying such minuscule returns.

Someone waiting for fixed rates to rise, opting to hold £10,000 for six months in an easy-access account paying 0.1 per cent will earn only £5 of interest in that time.

If they then fix, they would need the fixed deal to be paying more than 6.5 per cent for the next six months to replicate the interest they would have earned in 12 months by opting for the best 3.35 per cent deal now.

Kevin Mountford, co-founder of Raisin UK, said: ‘It doesn’t pay to wait when it comes to saving. Even if interest rates continue to rise, consumers should take action now.

‘Every day there is still millions sitting in low to no-interest bearing accounts, like current accounts, where inflation hits full force and the money loses value.

‘If it is clear that the savings will not be needed in the next 12 months, it is almost always more lucrative to invest them directly.

‘Of course, anyone who is uncertain about this, against the backdrop of rising energy costs, is playing the right card with a flexibly available easy-access account.’

What about the staircase strategy?

The staircase strategy offers an alternative to savers who want to save their money at fixed interest whilst benefiting from rising rates, according to Raisin UK.

For example, a deposit of £10,000 is divided up and £2,000 each are invested at fixed interest rates with terms of one, two, three, four and five years.

After just one year, the first fixed amount, including accrued interest, is paid out and can then be invested again at the highest interest rate.

In the following year, the two-year term deposit is due, and so on.

Mountford said: ‘With the staircase strategy, interest can be earned quickly and still take advantage of future interest rate increases.

‘It means savers take advantage of rising interest rates without having their money parked in checking accounts for months on end, earning no income.

‘Those who need the money in the short term can make it work for them in an easy access account, and for those looking for a longer term strategy one-year fixed rate bonds are an excellent option.’

THIS IS MONEY’S FIVE OF THE BEST SAVINGS DEALS

Most and least reliable cars REVEALED