Simon Gregson was ‘hauled in to an emergency meeting by Coronation Street bosses’ after he was quizzed in the back of a police van following an altercation between two men at a Toby Carvery in Aintree on Friday night.

The Coronation Street actor, 47, was at The Rocking Horse pub opposite the racecourse after Aintree Ladies Day having enjoyed some time at one of the course’s luxury suites earlier in the day.

And the star, who plays Steve McDonald in the soap, has allegedly been given a talking to in a bid to get him to keep his behaviour in check on nights out, according to a new report. 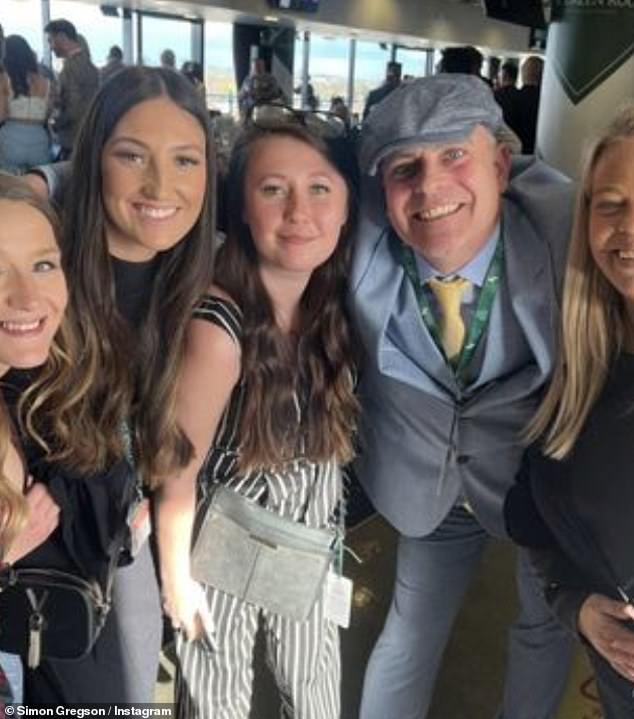 Oh dear: Simon Gregson was ‘hauled in to a meeting by Coronation Street bosses’ after he was quizzed in the back of a police van following an altercation between two men at a Toby Carvery in Aintree on Friday night (pictured at the event)

A source told The Sun: ‘Simon is one of Corrie’s longest-serving stars and is loved on set, but that doesn’t mean he has carte blanche to behave however he likes.

‘Bosses have told Simon his recent behaviour is not ok and it’s not a good look for the soap.

‘They’ve warned him to clean up his act. Simon apologised and told them he’d be on his best behaviour from now on.’ 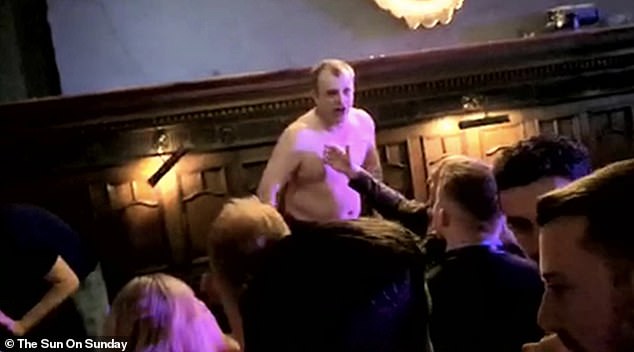 ‘He was acting pretty wildly’: It comes after Simon was reportedly kicked out of his co-star’s leaving party in Manchester by bouncers after dancing shirtless on furniture

MailOnline has contacted ITV and representatives for Simon for comment.

A spokesperson for Toby Carvery Aintree told MailOnline of the incident at the weekend: ‘We can confirm there was an incident at the restaurant on Friday night which was reported to the police. We are fully co-operating with the police inquiry.’

According to the Mirror, police spoke to Simon as he sat in the back of their van in the car park of The Rocking Horse on Friday after the altercation inside the pub.

A source told the publication: ‘There was a bust-up and bouncers kicked him out – they pinned him to the ground before the police arrived. He was taken to the police van and spoken to for some time. It was all very messy.’ 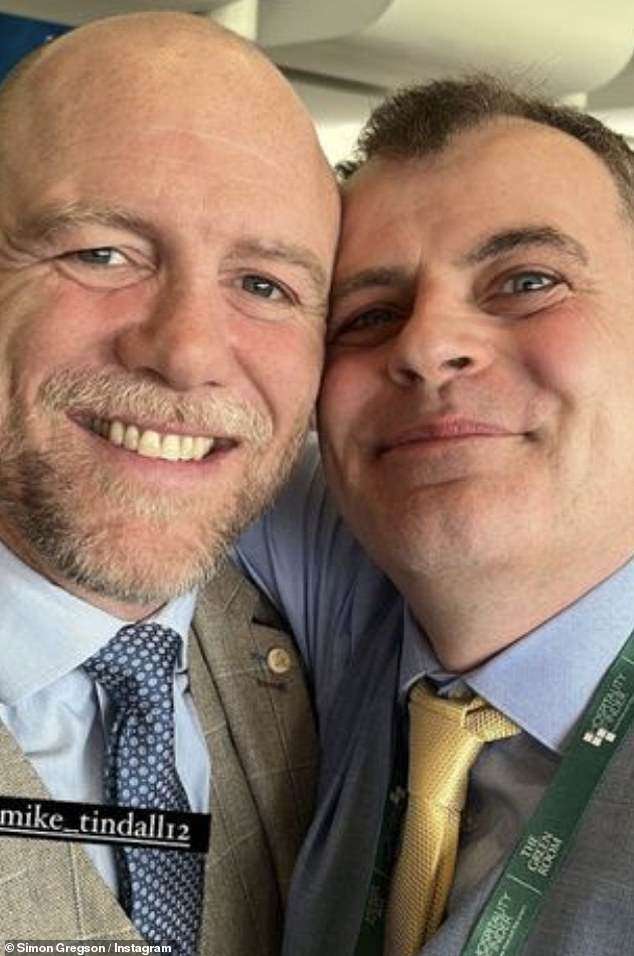 A police spokesperson added to the newspaper: ‘We can confirm Merseyside Police were in attendance at the Rocking Horse pub on Grand National Avenue, Aintree.

‘At around 9.20pm we received a report two men were involved in an altercation inside the pub. No injuries were reported and the victim declined to make a formal complaint to police. Inquiries are ongoing.’

Earlier in the day, Simon was seen with the likes of Princess Anne’s daughter Zara Tindall, 40, and her ex-England rugby captain husband Mike, 43.

MailOnline contacted a representative for Simon and Merseyside Police for comment. 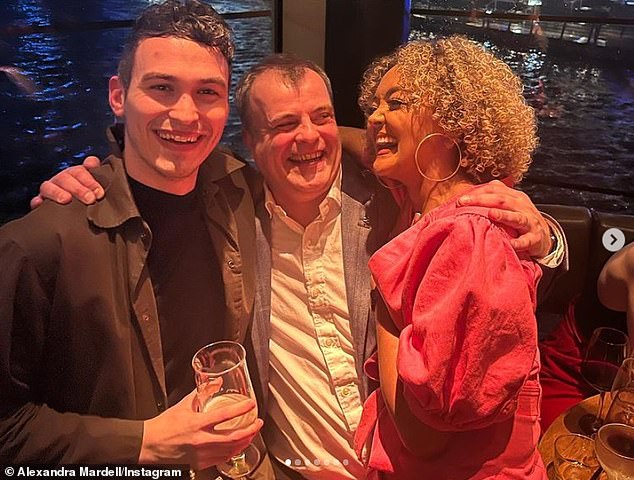 Hilarious: An onlooker said: ‘He was the life and soul of the party but took it a bit far and it annoyed the bar staff and bouncers in the end’ (pictured, centre, with Alexandra and her boyfriend Joe Parker, far left)

It comes after Simon was reportedly ordered by bouncers to head home from his on-screen daughter Alexandra Mardell’s leaving party in Manchester’s Deansgate district in February.

In footage obtained by The Sun, the soap star could be seen dancing shirtless on furniture after becoming ‘a bit merry’.

Simon allegedly directed his fury towards the security staff with an expletive-filled rant after they attempted to kick him out of the venue.

An onlooker told the publication ‘He was the life and soul of the party but took it a bit far and it annoyed the bar staff and bouncers in the end.’

A lip-reading expert told the publication Simon he appeared to be saying ‘f**k’ and ‘f**k you’ to the two members of staff before assuring: ‘I will get down.’

The star – who plays character Steve McDonald in the soap – had been partying with Corrie’s Katie McGlynn at the showbiz bash.

She allegedly stepped in-between her pal and the bouncer in a bid to cool down the situation, later posting a beaming photo of herself in an unmissable yellow dress alongside Alexandra, who plays Emma Booker in the ITV favourite.

The source continued: ‘Simon was acting pretty wildly — but more in the sense that he was in high spirits and getting carried away.

‘The crowd were laughing and cheering, with a lot of people egging him on, and most people there saw the funny side. But some clubbers were shouting abuse at him as well, which was unnecessary.’ 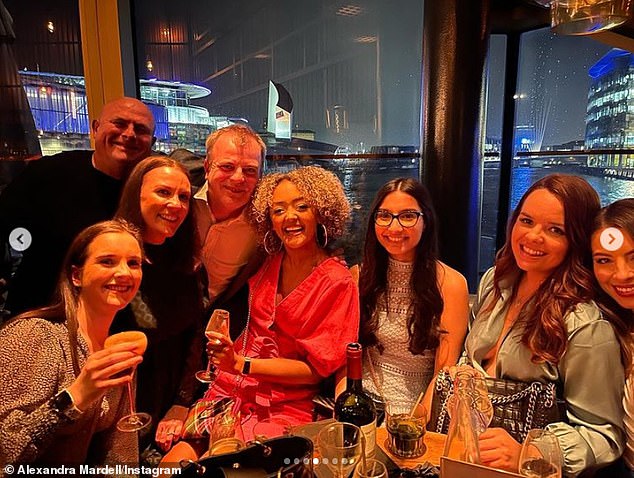 As Simon rose to fame in the 1990s as a new heart-throb in one of the nation’s most beloved soaps, he was hiding a secret life of binge-drinking and drug-taking.

Speaking exclusively previously to the Sunday Mirror, the star admitted that soon after his 1989 debut as Steve McDonald on Coronation Street, marijuana, cocaine and booze took a grip on his personal life.

‘I went completely wild,’ the 40-year-old actor admitted. ‘I’d go through a bottle of Scotch at four or five am after the pub… Sometimes I’d be two hours late for work. Other times I’d not be there at all. 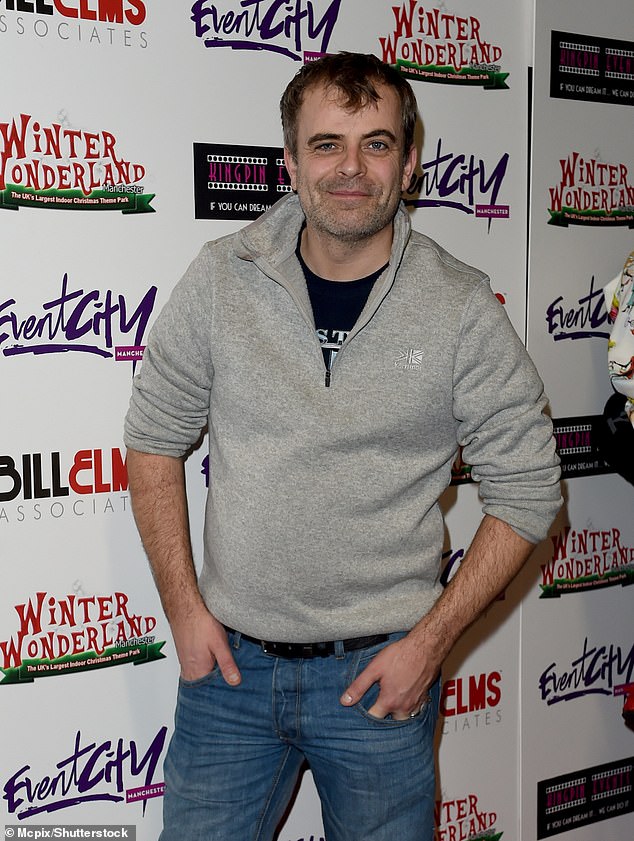 Looking back: As Simon rose to fame in the 1990s as a new heart-throb in one of the nation’s most beloved soaps, he was hiding a secret life of binge-drinking and drug-taking (pictured 2016)

‘I didn’t take it seriously and I didn’t want to be there. I hated being famous. I’m not proud of my behaviour, but getting wasted was a way of forgetting… The cocaine use came hand in hand with the alcohol abuse. I started smoking marijuana first.

‘Reality wasn’t too great so this ­alternative reality with the use of substances was a better place to be. It was an ­experimentation at first and I could afford it… I was spending a lot on it. It changed me as a person.’

Admitting that his resulting tardiness on the Corrie set led to tensions with on-screen dad Charlie Lawson, he turned things around soon after his troubles were made public in 1995.

However , a sober Simon said: ‘Everything that happened has made me the person I am today and I am so grateful for the life I have. I have a fantastic job, a gorgeous family and amazing friends and colleagues. I am a lucky bloke.’ 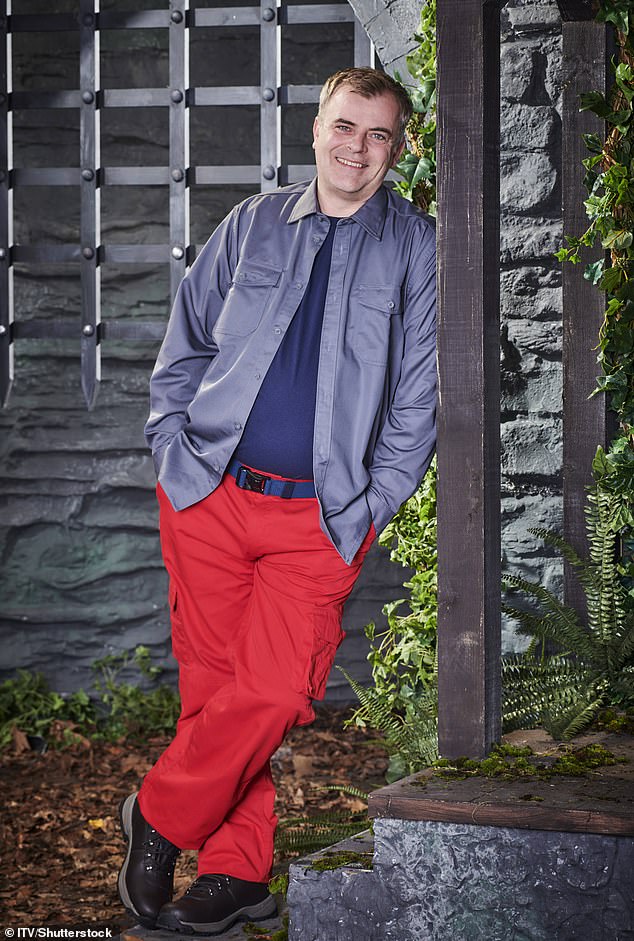 Turning things around: Admitting that his resulting tardiness on the Corrie set led to tensions with on-screen dad Charlie Lawson, he turned things around soon after his troubles were made public in 1995 (pictured on I’m A Celebrity last year)