Mr Blackford slammed the rumours as “utter nonsense” and “total crap” on Thursday, laughing off a suggestion he was the target of a pincer movement by senior SNP MPs Alyn Smith and Stewart McDonald.

Both MPs issued similar denials with Mr McDonald completely shrugging off the report.

Shadow Scottish Secretary Ian Murray, responding to the story, said: “The SNP is in total disarray at Westminster.

“Ian Blackford’s ridiculous claims on pensions in an independent Scotland have been thoroughly debunked, and now even his own MPs can see that he was wrong.

“The SNP has refused to back Labour’s plan for a windfall tax on the enormous profits of oil companies, and it now seems they are entering a civil war. 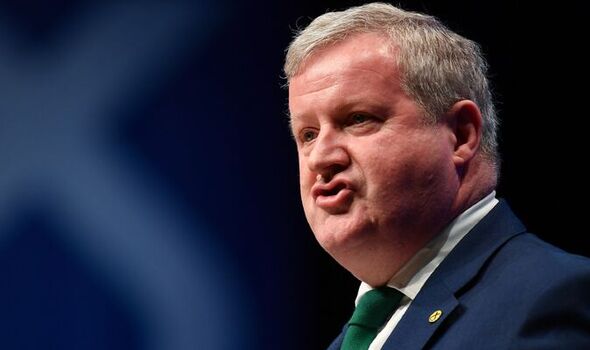 Ian Blackford MP is leader of the SNP at Westminster (Image: Getty)

“At the next general election, Scots can choose MPs who can do so much more than just oppose the Tories while fighting amongst themselves. By voting Labour, we can replace the Tories altogether.”

Mr Blackford has led the SNP group in Westminster since 2017. He regularly features in Prime Minister’s Questions (PMQs) as leader of a party with the third largest number of MPs in the Commons.

Politico reported on Thursday that four senior sources said the resignation could come ahead of May council elections.

The Ross, Skye and Lochaber MP said: “I have got a job to do leading the group, I am fully focused on doing so and I intend to lead us through all the challenges we face and to stand by the side of the First Minister ready for the campaign ahead.”

Mr McDonald, who serves as the SNP’s defence spokesman, in reply to a tweet of the story, said: “I’m afraid your man has been had.

“All of this is literally made up by people with the luxury of too much time on their hands.”

Asked by the BBC about his relations with senior members of the SNP group, Mr Blackford said: “I’ve got a good team, a strong team. We’re getting on with the job and we’re doing that safe in the knowledge that I’ve got a group that are behind me.

“Let’s focus on the day job. Let’s make sure that we’re holding this Government to account, dealing with the crisis in Ukraine and, of course, we’re focused on the delivery of the Scottish government’s manifesto commitments.”

“That is something we all take seriously, that we deliver on the manifesto commitments, and we’ll be doing exactly that.”

It comes after Mr Blackford hinted that the focus should remain on Ukraine in the short term, telling The Scotsman on Monday that the SNP must be respectful of its responsibilities after Russia’s invasion, but that he remains committed to delivering on the independence mandate.

However, he cautioned those who want immediate progress on a second vote to be “mindful of where we are” given events elsewhere in the world.

Politico reports two reasons why Mr Blackford might stand down, the first being grumbles among MPs and officials about his recent performance as leader.

This includes what was described by one MP as an “unforced error” when Mr Blackford claimed the UK government would continue to pay for Scottish pensions post independence.

Two insiders reportedly told Politico a lack of authority had translated into poor handling of the issue of gender reforms in the party.

SNP MP Joanna Cherry, who takes a different view on the reforms from the party leadership and many of its activists, was sacked from the SNP frontbench by Mr Blackford last February.

According to Politico, there are some in the party who think he should have removed the whip.

A second reason maintains that Mr Blackford has grown tired of the role.