CORONATION STREET: THIS COULD GET MESSY, PHILL! 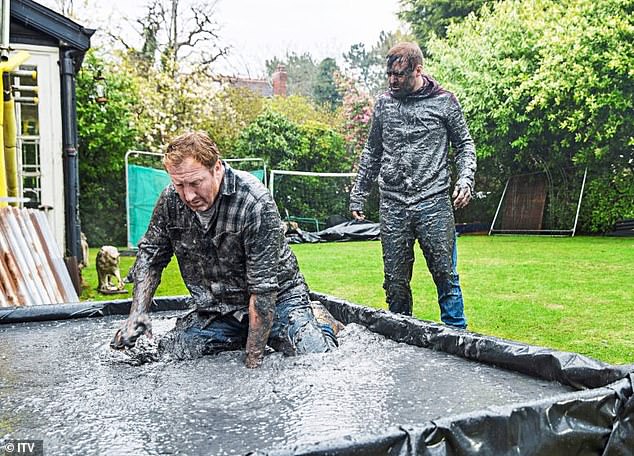 Storming round to Phill’s (left) when the truth comes out, Tyrone (right) struggles with him, and the pair fall into the wet cement on the patio

Little did Fiz know when she named her daughter Hope that she would spend every day saying her name – not as in calling her by it (she is only ever one half of The Girls), but as in really hoping that she’ll turn into a ‘normal’ child. After discovering what Phill is up to, Hope takes revenge by smashing the arm of a mini-digger into his car.

Storming round to Phill’s when the truth comes out, Tyrone struggles with him, and the pair fall into the wet cement on the patio. How much work is Phill doing on that new house, for goodness’ sake?

BATTLING… IN THEIR BRIEFS

Corrie’s Alan Halsall (Tyrone) and Jamie Kenna (Phill) gave a new meaning to solid acting performances when they agreed to their fight scene set in real concrete. Not only was it freezing cold, it was a struggle to get out of the stuff – not least because 6ft 4in Jamie kept holding on to 5ft 7in Alan and pushing him back in.

The scene ends up with them stripped down to their pants, by the way! Alan went to the gym to look good while Jamie went on holiday – drinking and eating doughnuts. Great fun filming, apparently.

They’ve even had some underfloor heating installed (good luck with that amid soaring energy costs). He’s lost his job, so how is he paying for it all?

Struggling to find an engagement ring in the concrete, he retrieves it and proposes to Fiz. Er, he has met Hope, right?

It’s another week packed with BWP (Below Waist Problems), with Faye being referred to a fertility specialist and Tim talking to Dr Gaddas about his impotence. Somebody, give the doctor a drink!

Does she ever leave that office? The waiting room’s never even half full, so surely she could slip out for the odd half at the Rovers during lunchtime.

Imran and Toyah agree to let Abi have Alfie for a day, little suspecting that she’s planning to do a runner. After securing two fake passports and making travel plans for Costa Rica (that’s some adventure, when Blackpool is another continent to most locals), she begs Kevin to keep her secret.

When he bumps into Imran in the street, will he reveal all? Have you noticed how much time Imran spends in the street, by the way, always lurking with sinister intent?

For a man who is outdoors so much, you’d think he’d have had the nous to buy an overcoat. Maybe he’s just keeping an eye on Toyah and that pram.

Straight out of the Leanne School of Slalom Baby Racing, Toyah would be advised to put stabilisers on the wheels if she doesn’t want Alfie to end up on the cobbles. 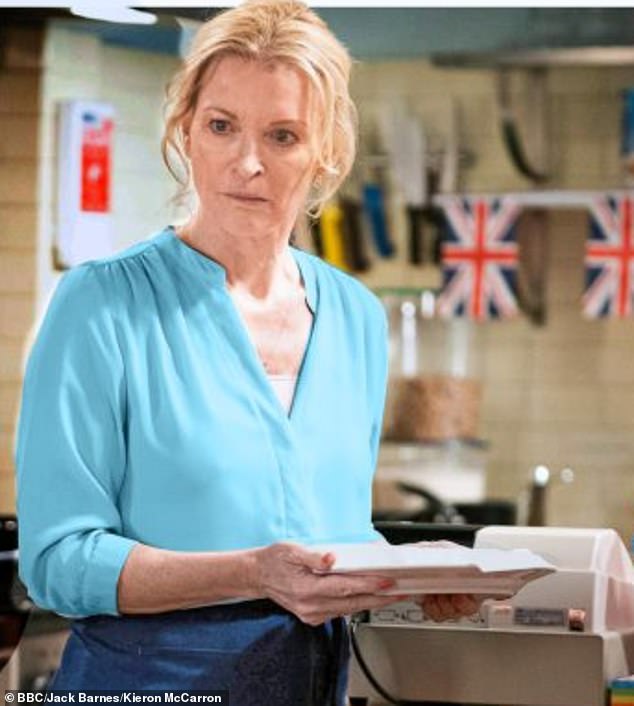 Kaffy (pictured) is stunned when she hears that Ben apparently cheated on Callum. Ben was sexually assaulted by Lewis who is quick to tell him that he was the instigator

Have your say on who gets the honours at The British Soap Awards on 22 June. Vote at britishsoapawards.tv for the Best Soap, Best Leading Performer and Best Family categories.

This week’s much-publicised storyline that sees Lewis sexually assault Ben has been criticised for its similarities to Corrie’s in which David was the victim. In fact, both shows are way behind the times because the issue was first covered in a UK soap by Hollyoaks in 2000, when Luke Morgan was raped by Mark Gibbs.

It continues to be an emotive subject, and research suggests that half of British men have had unwanted sexual experiences.

In Walford, newcomer Lewis is quick to tell Ben he was the instigator, and Kaffy is stunned when she hears that Ben apparently cheated on Callum.

Kaffy spends all her time looking stunned, and almost always to do with the men in her life – lovers, sons or grandsons. That’s a lot of testosterone for one woman to deal with.

Doing a breakfast fry-up at the caff is the highlight of her day; she knows it’s going to be downhill from there on.

Lola is having a bad week when she hears Isaac has met someone else and won’t be returning. We can all breathe a sigh of relief at that.

Not Lola, though, and at Clara’s photography exhibition she accuses Jay of cheating with Frankie. Fat chance. Jay never seems able to muster enough energy to clean his teeth. 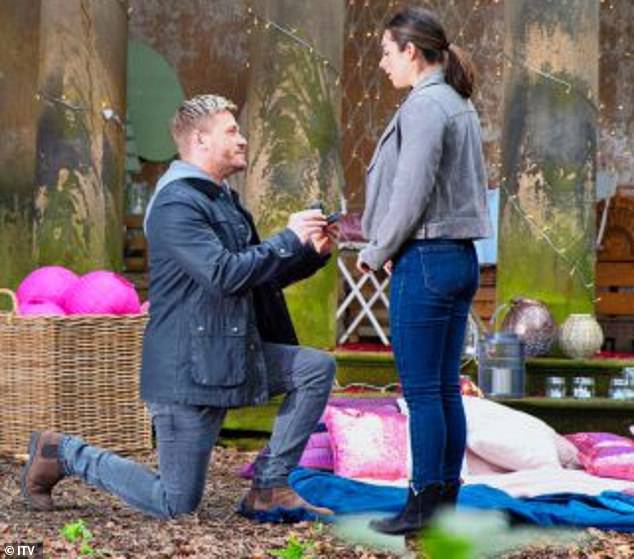 When an over-excited David (left) goes down on one knee and proposes, Victoria (right) is left speechless

Surely the only question David should be asking is how his shop survives when selling roughly three products a week. Even at Christmas, you don’t see so much as a jar of mincemeat flying off the shelves, so don’t expect to see him up for Retailer of the Year anytime soon.

Now he has a different question to pop in deciding to propose to Victoria and claims he has found the perfect engagement ring at a jeweller’s in town. Why not just prise off a ring pull from one of his unsold cans?

It’s only for Victoria, after all; given her taste (not least in unsavoury men), she’s not going to know the difference. When an over-excited David goes down on one knee and proposes, Victoria is left speechless (always a blessing); but will it be yes or no?

It’s time for Noah, the most unconvincing psycho in the Dales, to go to court, as a result of Charity having reported him (ah, a mother’s love; can’t beat it). Feeling resentful, Noah tells Charity he wants to plead not guilty and suggests doing a runner.

Given the village bus service, that’s never really feasible. Hopping on a snail would get you away faster.