CORONATION STREET: GARY PUTS UP A FIGHT FOR MARIA 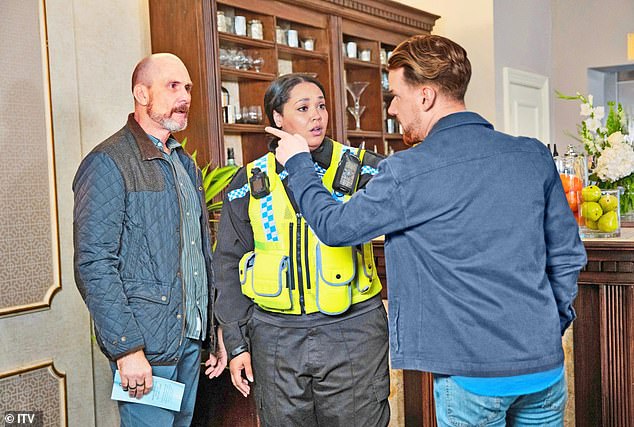 Gary (pictured) is angry when someone makes another video of Maria in Coronation Street. He blames Jimmy, the refuse team leader

Gary’s furious, and when Jimmy the refuse team leader (now that’s a character’s title the show could do without) heckles Maria at her press conference, Gary decides he’s behind the online abuse and pins him to a wall before the police step in. Let’s hope they recycle this dire plot soon (I’m happy to be refuse storyline team leader), and there’s light in this very bleak tunnel when Maria tells Sally she’s withdrawing from politics (hurray!).

Alas, Sally tries to persuade her otherwise (boo!) and Maria decides to continue but keep off social media. That lasts about an hour and she’s back on there, shocked by even more nasty messages.

She’s worse at this politics lark than she is at hairdressing – and that’s saying something. She was probably responsible for Adam’s latest monstrosity; I swear birds are now nesting in there.

Or is the hairdo training to be a stand-in for a Leo Sayer biopic?

Corrie’s alcoholic Audrey storyline was pitched to actor Sue Nicholls years ago, and she persuaded the show to drop it. I wonder how she feels now – there are more empties in Gail’s bin than a bottle bank.

It’s an aggressive week for men and, as Peter awaits the verdict from the General Medical Council over Thorne’s misbehaviour, his blood starts to boil. With Carla telling him to focus on their future and Thorne telling him to embrace his second chance, he can’t contain his emotions and angrily confronts the surgeon.

Anyone else think he was less bolshy when drinking?

Anticipation is rife with Fiz’s preparations for her wedding. Declaring that she wants everything to be perfect (always an entire recipe book for disaster), she doesn’t see Hope lurking in the hallway.

With the devil child already complaining about her bridesmaid dress, I predict carnage, especially when the imminent pre-wedding visit from Mimi is thrown into the mix. And don’t get me started on the dullness of the groom. 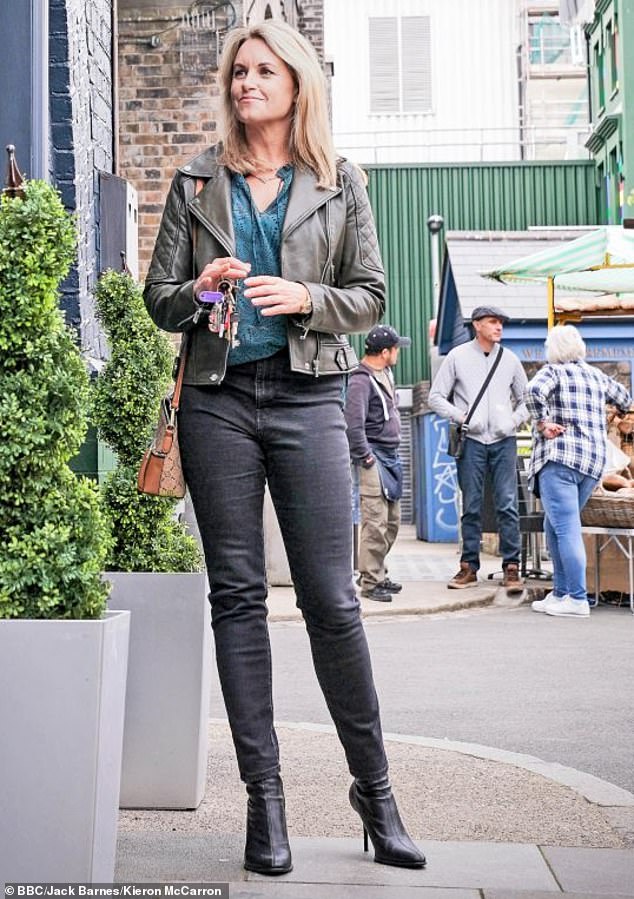 Sam (pictured) could not be happier and wears the look of the cat who got not only the cream, but the whole dairy; if she pats herself on the back any more, she’s going to need reconstructive spinal surgery

All change in Albert Square

As always with changes there has been a public outcry. No disrespect to any of the actors, but for me these characters have run their course and their storylines feel like the efforts of someone milking a dry cow.

And so, to another incarnation of the club formerly known as Ruby’s. It’s now a bar called Peggy’s in a tribute to Barbara Windsor, who played the Queen Vic landlady of the same name, and who died in 2020.

Sam could not be happier and wears the look of the cat who got not only the cream, but the whole dairy; if she pats herself on the back any more, she’s going to need reconstructive spinal surgery.

The smile might be wiped off her face when Shirley trashes the place as payback for all the times the Mitchells hurt her family. Blimey, if everyone took that view, the Square would be trashed on a daily basis.

As she tells Kat and Sharon that her vendetta won’t stop, two men enter, waving a gun. Oh, puh-lease, not that gun from the props cupboard again; it gets more airtime than Mick’s frown.

Kat and Sharon call Sam, but then a shot rings out and, inevitably, someone is at the receiving end of the barrel.

Stuart’s attempt to bond with Roland lasted all of two minutes as it looks as if it’s the end for him and Rainie. Is anyone going to feed that baby, by the way? 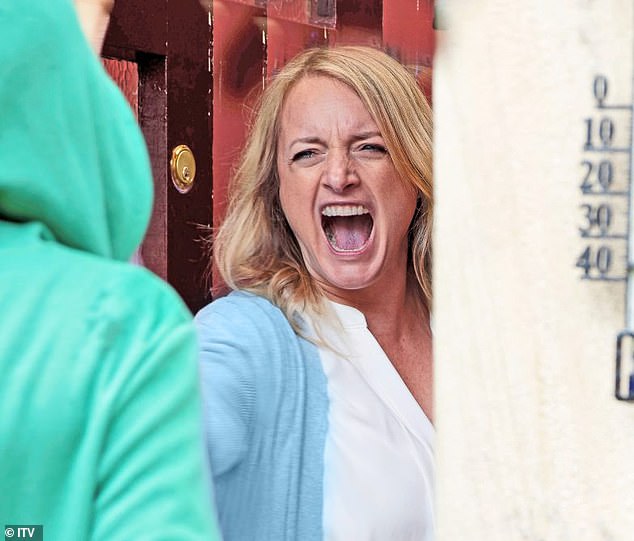 Britain’s most dangerous village (and, bizarrely, the most under-policed) has been rocked by the vicious attack on Nicola; still, it’s good to see her lovely teeth remained perfectly intact. Psychologically, she’s doing less well, and is shaken when there’s a knock at the door and a shadow appears because she thinks her attackers have returned.

Who could blame her; every baddie in Emmerdale wears a hoodie (we know that Cain is at his most lethal when wearing his, and just look at serial killer Meena). The visitor turns out to be Bernice, but Nicola is still shaken, and when she goes to pick up the kids from school, she accidentally collides with David’s van.

Er, would that be the van carrying goods that nobody ever orders or buys? It’s not like taking a Sainsbury’s truck off the road, but David is furious and demanding insurance details when Nicola locks herself inside the house again.

In more juicy news, Chas feels guilty after a passionate kiss with Al (yes, it seems even he can manage to put his mobile down every once in a while – a miracle) and breaks all ties with him.

Good luck with that, he’s never more than six steps away. Nothing but a time machine is going to sever that connection.