Soapwatch with JACI STEPHEN: Is Stephen flirting with disaster in Coronation Street? 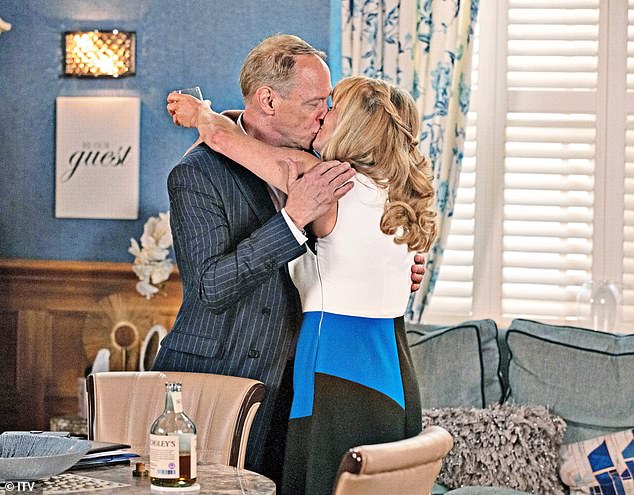 In Coronation Street, Stephen gets cozy with Jenny in the back of the Rovers. But will they be caught by Leo?

What, pray, does Ed do all day, apart from talk to Steve about his roof and take on labourers? What are they working on?

Now he has a labouring job for Leo, who is sour about turning down the job in Canada. Jenny says she doesn’t want to stand in his way, and when a flirty Stephen arrives at the pub, Jenny  invites him into the back – which is always a euphemism for Couples Up To No Good.

During a passionate kiss, will they be caught off guard when Leo returns brandishing an engagement ring (blimey, labourers’ wages must be really good; he’s only been working for two days)?

Stephen’s interest was piqued when he heard that Jenny is the sole owner of the pub. How many more women is he going to not-so-subtly hit on?

Elaine, Yasmeen, Jenny – and then there’s Gabrielle back in Italy…

Daniel Brocklebank wants his character Billy to have a sex education chat with Summer. ‘There could be some real comedy in Billy squirming his way around talking about the birds and the bees.’

He’s still nagging Audrey to sign the trust fund papers – or distrust fund, as it clearly is where he’s concerned. She tells him she’s changed her mind, then admits to the family that she tried to kill herself.

The shock will doubtless be tempered when she tells them she’s made a will giving them all equal shares… except… wait for it… except Stephen, who was kind enough to say he didn’t need it.

Oh dear, Stevie boy, that plan hasn’t just backfired, it’s blown your head off your shoulders. If you have money troubles, work for Ed. You’ll be Bill Gates by the end of the year.

Is romance in the air for Ken when he invites Wendy to a musical? He’s thrown when she gives him the cold shoulder, but why?

My guess is it’s Hamilton: at two hours 45 minutes, that’s a long night to have to spend with Ken. Thank goodness those 9900 seconds include an intermission of 15 minutes, during which she could take refuge in the toilet. 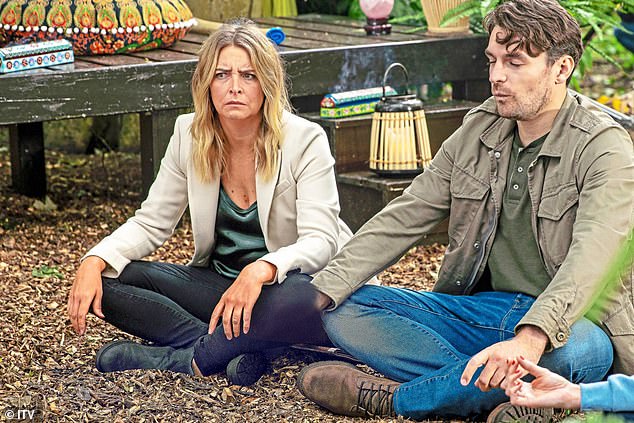 Mack takes Charity (pictured) to a wellness retreat in Emmerdale after losing the baby, where they try meditation

When do Emmerdale’s vicars find time to read the Bible, let alone preach? Have you ever seen a bunch of men and women of the cloth with such complicated lives? Charles is the latest, and there may be trouble ahead with his daughter Naomi, when Nicola recognises her voice and trainers as those of her attacker. Naomi seems intent on getting her claws into Nate, although Karene Peter (who plays Naomi) thinks it might be the other way around. Naomi has a pulse, love; that’ll do for him.

Since Charity lost the baby, Mack has been quiet about wanting children. He takes Charity to a wellness retreat, where they try a bit of meditation.

Given that meditation requires participants to stay quiet, it’s hard to see how anyone in the village could accomplish this, let alone the walking foghorn that is Charity.

Inevitably, it’s a disaster, and they quit, amid much laughter. Charity is worried that they haven’t been intimate since losing the baby, but as they kiss, Mack says he wants to try for another one.

Talk about picking your moments. Charity tells him to find another baby mama.

Well, that’s more than a red rag to a bull. Where Mack and women are concerned, who needs the whole rag; a red thread is enough to lure him and, sure enough, he’s soon in bed with a mystery woman.

He reunites with Charity, but with a new cloud hanging over him; well, more of a Scotch mist, I’d say.

Any guesses as to who the woman might be? I’m betting Gabby or Kim. It usually is.

Harriet may soon be back in man-eating mode when Dan goes to kiss her. She could do worse, says Bernice. Damning with faint praise. 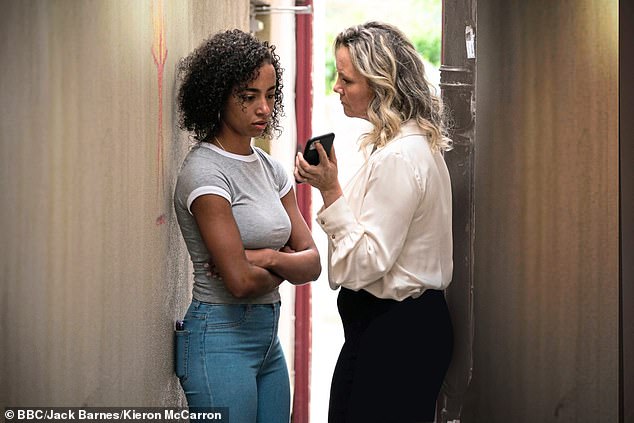 Devising a plot to bring Linda down, Janine gives Jada money and blackmails her in BBC’s EastEnders this week

Will Janine stop at nothing to keep Mick and Linda apart? On the day of Linda’s court hearing, she’s seething (well, it’s more of a Vesuvius rumbling really) when she realises that if Linda’s banged up, Mick will be visiting her.

Devising a plot to bring Linda down, she gives Jada money and blackmails her into helping. Suffice it to say the pair are no Thelma and Louise, and surely in the whole of the East End, Janine could have found a more competent accomplice.

Jada has all the energy of a limp lettuce and, sure enough, she instantly regrets her actions and tells Janine they’ve gone too far. Naturally, Janine doesn’t give two hoots what Jada thinks, and the blackmail continues.

In better news, it’s Dana’s leaving party. With any luck, she’ll take Jada with her and they’ll pursue their double act – Dull and Duller – far, far away from the Square.

Worried about her dad’s behaviour, Dana tries to defer her place at university. Hang on… when has the girl ever opened – or even picked up – a book?

Following Harvey into Peggy’s, she’s in for a shock as a surprise party awaits her. Oh dear, they never end well.

Surprise parties are right up there with fairm-ly dinners and the Chainsaw Massacre.