Spain and Germany at loggerheads as EU rules spark fears

The news comes as the Government of Spain’s Pedro Sánchez has enormous expectations in the change in the German chancellery, which after 16 years in the hands of Angela Merkel’s conservatives has passed to those of Olaf Scholz’s social democrats. On Monday, in La Moncloa, in their first official meeting, Sánchez and Scholz showed an evident harmony in almost everything, with the undisguised intention of strengthening the European social democratic axis, which now has two of the four big countries, while the conservatives of the EPP don’t dominate any of them.

The only important discrepancy was in the tone of the two when talking about the modification of the fiscal rules and the stability pact.

However, sources from the Spanish Executive point out that inside, in the official meeting, both leaders explored the possibility of giving more leeway to the most indebted countries, such as Spain, Italy or France, so that they can reduce that debt gradually, without strong pressures such as those of 2011, which drowned several nations.

But when it came to the fiscal rules, the statements were clearly different.

The fiscal pact, a strict agreement that obliges to reduce the debt below 60 percent and the deficit below 3 percent, has been suspended during the pandemic and it is not clear if and how it will return.

Spain, Italy or France, all above 100 percent, want to change these rules. Germany is more reluctant, but there seems to be room for negotiation with intermediate formulas. 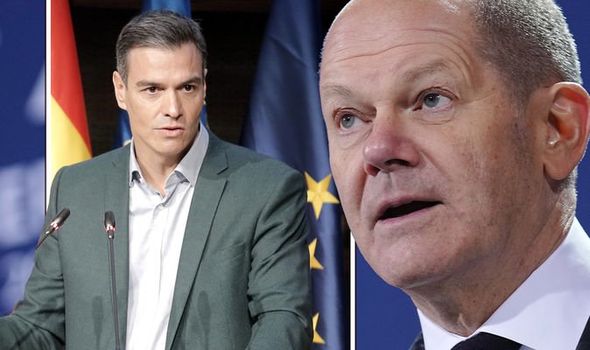 Spain and Germany are at loggerheads over EU fiscal rules (Image: Getty)

Mr Sánchez was very clear: “The fiscal rules are too complex, difficult to comply with, it is important to change them.

“We have to respond to the ecological challenge and guarantee the sustainability of public finances”.

Chancellor Scholz, on the other hand, defended the stability pact although he was not closed to changes either.

He said: “The past has shown that in Europe we do best when we solve economic problems together.

“The stability pact has given us the framework for the recovery fund. We want to build on the experiences of the past. Europe will walk hand in hand in the coming years on the basis of the Stability Pact, which has served as a framework for us and will help us in the future.”

Chancellor Scholz says the EU has shown it can work things out together (Image: Getty)

In spite of this different tone in public, Spanish government sources assure that in private, harmony was also important in this complex issue of fiscal rules.

The positions of Germany -which does not need Next Generation aid and has a debt of 72 percent of GDP- and Spain -which has a debt of 122 percent and is the second country that receives more funds after Italy- are always different in these matters, but Sánchez and Scholz found many points of agreement, according to these sources, to work in the coming months on flexible mechanisms around the stability pact.

Mr Scholz is a social democrat, and he is very clear that the economies of the south cannot be suffocated with too strong debt reduction requirements that impede growth, they point out in the Executive.

Moreover, the Chancellor and his coalition are committed to massive public investment to promote the ecological transition, and this is incompatible with a strong adjustment.

The German coalition agreement itself states that “the stability pact must be reformed to be simpler and more transparent in order to ensure growth, maintain debt sustainability and guarantee sustainable and climate-friendly investments”.

Spain has not found the same wall in Germany as in the past, especially in the era of so-called austerity.

Although the discussion will be very tough not so much with Germany but with the so-called frugal countries, which want to return as soon as possible to the fiscal rules and to squeeze the countries of the South.

Both Spain and Germany have called on calm over the Russia / Ukraine situation (Image: Getty)

Both leaders also agreed to send a strong message to the Russian leader, Vladimir Putin, to immediately order a de-escalation on the border between his country and Ukraine, where troop movements raise fears of a military invasion like the one in Crimea.

Mr Scholz, in words echoed by the Spanish premier, said: “The German government wants to say that it is very important to see clear steps by Russia toward de-escalation of the situation.

“A military aggression on Ukraine would bring serious political and economic consequences. It would only cause suffering to everyone.”

Germany has urged Western nations to pursue a diplomatic solution to the crisis between Russia and Ukraine.

Germany’s foreign minister has warned Russia that it will pay a “high price” if it attacks Ukraine, and said she hoped tensions between Moscow and Kyiv could be solved by diplomacy.