By Jonathan Chadwick For Mailonline

An electronic spinal implant has enabled a paralysed woman to walk for the first time in 18 months, a new study shows.

The 48-year-old woman, called Nirina, has multiple-system atrophy (MSA), a rare condition of the nervous system that causes gradual damage to nerve cells in the brain.

The primary sign of MSA is a drop in blood pressure when a patient stands upright, making them feel dizzy lightheaded or faint.

Scientists in Switzerland fitted Nirina with an ‘electronic stimulator’, implanted directly on her spinal cord, to reactivate specific neurons that regulate blood pressure.

After being bedridden for 18 months, she was able to walk further and further distances the longer the implant had been in for.

Three months after the implant was put in, she could walk up to 820 feet (250 metres) with assistance, the researchers report. 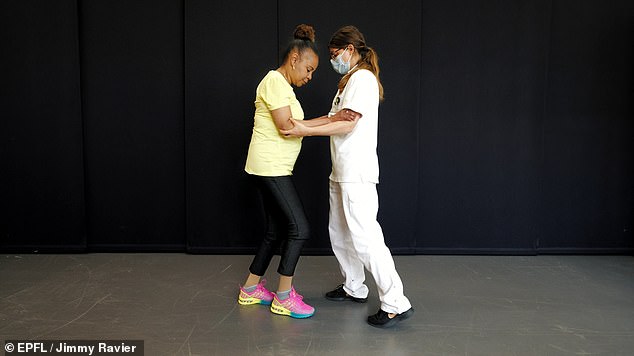 A neuron, also known as nerve cell, is an electrically excitable cell that takes up, processes and transmits information through electrical and chemical signals.

About a tenth the diameter of a human hair, it is one of the basic elements of the nervous system. They transport stimuli so a human can react to his or her environment.

The stimulation, for example the burning of the finger at a candle flame, is transported by the ascending neurons to the central nervous system and in return, the descending neurons stimulate the arm in order to remove the finger from the candle.

The implant was developed by scientists at the NeuroRestore research center in Lausanne, Switzerland.

‘MSA is a disease in which neurons are dying – specifically the neurons that are responsible for the control of blood pressure,’ said Jocelyne Bloch at NeuroRestore.

‘It means that when the patient is standing up, the blood pressure goes down, and then it’s followed by a syncope. Syncope means that you feel unwell and you have to rest all your life.

‘We’ve applied this technology in one patient. It worked. So now the next objective is to do it in more patients, in many people.’

The implant had already been used to treat low blood pressure in tetraplegic patients (those with an inability to voluntarily move the upper and lower parts of the body).

But this trial involving Nirina marks the first time it was applied to this kind of neurodegenerative disease.

For the first seven days, she underwent tilt-table tests – meaning she lay on a table that slowly moved her body position from horizontal to vertical – which slowed her decrease in blood pressure. 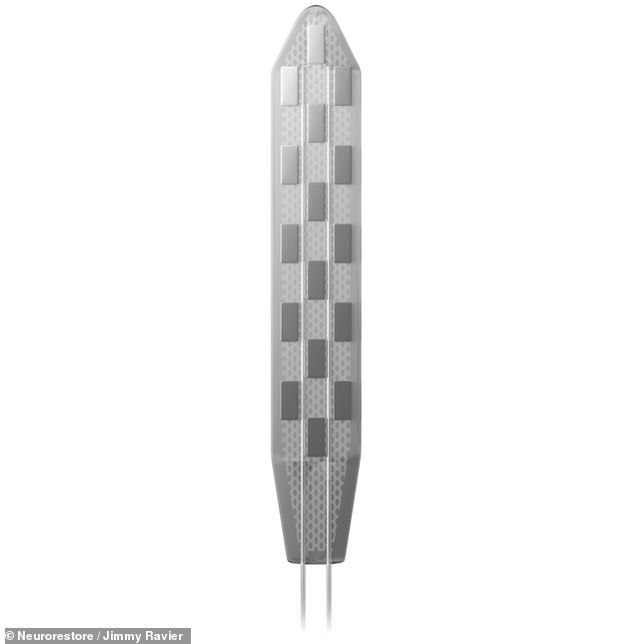 The scientists fitted Nirina with an ‘electronic stimulator’ (pictured). It was implanted directly on her spinal cord, to reactivate specific neurons that regulate blood pressure

She also received in-hospital rehabilitation three days a week for six weeks and then started using the system at home while standing.

After three months, she no longer experienced syncope – fainting or passing out – and could walk 820 feet using a walker.

Nirina described the changes as ‘a miracle to me’. She said: ‘During the past two months I have been able to walk again.’

Since 2017, Nirina has suffered from multiple system atrophy-parkinsonian type (MSA-P), the most common form of MSA. To date, no treatment exists for MSA-P. 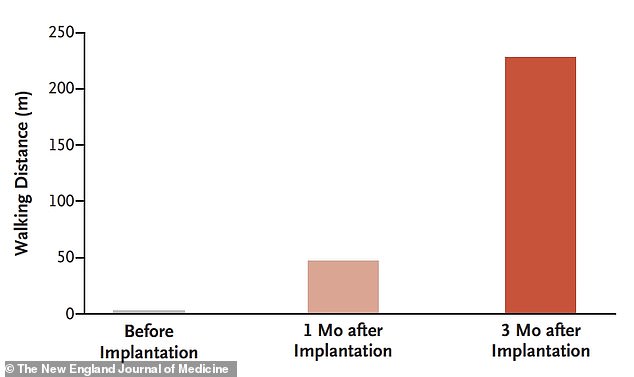 Three months after the implant was put in, she could walk up to 820 feet (250 metres) with assistance, the researchers report

MSA-P leads to the loss of sympathetic neurons that regulate blood pressure, which tends therefore to drop dramatically as soon as patients are in an upright position – a problem known as orthostatic hypotension – in some cases causing them to faint.

This makes them more likely to fall, limits their ability to stand and walk around, and can eventually shorten life expectancy.

Patients’ quality of life is reduced considerably since they must remain in a reclined position to avoid passing out.

The study, titled ‘Implanted System for Orthostatic Hypotension in Multiple System Atrophy’, was published in The New England Journal of Medicine.

Multiple system atrophy (MSA) is a rare condition of the nervous system that causes gradual damage to nerve cells in the brain.

This affects balance, movement and basic functions of the nervous system such as breathing, digestion and bladder control.

Symptoms of MSA usually start when someone is between 50 and 60 years of age, but can begin at any time after 30. The symptoms are wide-ranging and are similar to Parkinson’s disease.

Men may have erectile dysfunction – although health experts are keen to point out this is a common condition.

Low blood pressure when standing up is common , as well as problems with co-ordination, balance and speech.

There’s currently no cure for MSA and no way of slowing its progression.

People with the condition typically live for six to nine years after their symptoms start and may get worse quickly during this time. Some people may live for more than 10 years after being diagnosed.

The Multiple System Atrophy Trust provides help and support to people with MSA.