Popular cryptocurrencies like bitcoin and ethereum have seen prices fall in recent weeks, but stablecoins are also having their moment in their spotlight – and for all the wrong reasons.

TerraUSD, a prominent stablecoin, broke its peg with the dollar and is now trading at near zero which has precipitated a wider crash and even blue-chip cryptocurrencies are suffering. 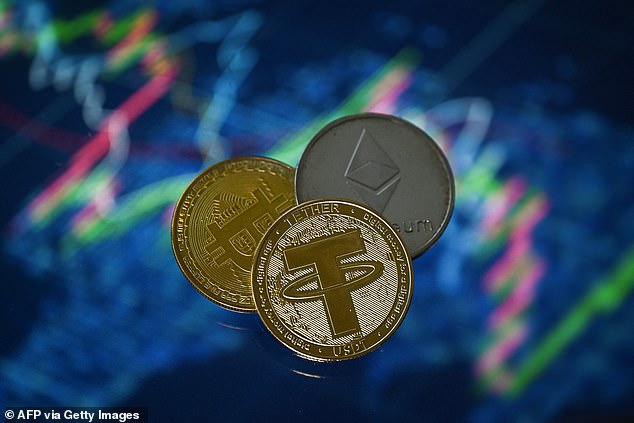 The significant crash in TerraUSD, which is backed by an algorithm rather than real assets, has prompted people to consider the future of stablecoins more generally.

We look at what prompted a collapse and what it means for stablecoins and the wider crypto market.

What are stablecoins and how do they work?

A stablecoin is a type of cryptocurrency that is tied to real-world assets like the US dollar.

They were developed partly in response to the volatility seen in other cryptocurrencies like bitcoin, whose value oscillates constantly, but now stablecoins are starting to crash.

They are based on similar blockchain technology to cryptocurrencies but they are built to offer more stability.

Then there are algorithmic stablecoins which aren’t backed by any asset. They use a computer algorithm to keep the value from fluctuating too much. It can issue more coins when its price increases and buy them off the market when the price goes back down.

Traders tend to buy stablecoins which are accepted on crypto exchanges and these are then used to buy and sell other cryptocurrencies more quickly.

Tether is the largest stablecoin – it is pegged on a one-to-one basis with US dollars and it says it is fully backed by its reserves of assets which include US government bonds, corporate debt and a small amount of cash.

Stablecoins were developed partly in response to the volatility seen in other cryptocurrencies like bitcoin, but as the past week has shown they are not risk-free.

Why did TerraUSD crash?

Where TerraUSD differed was that it was backed by an algorithm rather than actual US dollars.

The algorithm would adjust the supply of Terra USD via another token, Luna, to keep its value pegged to the dollar.

This stopped working when Luna’s value plunged to near zero, adding pressure to an already tumultuous time in the market for cryptocurrencies.

Traders say this was prompted by a series of large withdrawals from Anchor Protocol, a platform created at Terraform Labs, the company behind the token.

These transactions prompted more and more investors to pull their TerraUSD from Anchor and sell the coin.

The reserve fund of around $3billion in bitcoin and other cryptocurrencies, which is owned by Luna Foundation Guard, a non-profit co-founded by Terraform founder Do Kwon.

The sale of this amount of bitcoin contributed somewhat to bitcoin’s price fall last week, according to analysts.

Do Kwon, co-founder of Terraform Labs, the company behind the token, announced a ‘recovery plan’ in a series of tweets last week.

The company will now seek additional funding and rebuild TerraUSD. The token will be backed by reserves rather than relying on an algorithm.

What does it mean for markets?

Tether, the most popular stablecoin which is backed by real assets, faced a short-lived crisis last week when its value dropped from $1 to 95 cents.

It has since recovered but it has raised questions about stablecoins and regulation around cryptocurrencies.

However, central bankers have expressed concern that the collapse of a stablecoin could have wider implications for traditional financial markets.

Martha Reyes, head of research at crypto brokerage BEQUANT said: ‘The markets are in meltdown but this may present an opportunity for institutional players to start building positions and push stablecoin regulation to provide more confidence.

‘While we can’t call the bottom and correlations among asset classes remain elevated, Bitcoin has survived corrections of 70-80 per cent in the past. This may be an opportunity for institutions to build positions at better levels.

‘The uncertainty around stablecoins is a concern and could lead to another flush out but we may finally get the much needed regulatory framework that could entice institutions in. Regulators tend to be reactive, so this may be the catalyst for greater stablecoin regulation.’