The First Minister has flip-flopped between arguments over who will foot the bill for pensions if Scotland were to leave the UK, and which currency would unpin the likes of Scottish interest rates. Tony Miklinski, Scottish Conservative councillor for Cupar, Fife, has denounced the lack of clarity on economic and social policies post-independence, which some predictions say spell hardship for Scots. Mr Miklinski told Express.co.uk: “Now, of course, the loyal nationalists say: ‘We don’t care how poor it makes us.

“Well, that’s the case for a small percentage of people.

“The vast majority of Scots just want to get on with their lives, safe and secure, able to work, able to get a decent wage and enjoy their lives.”

The issue of pensions has become contentious in the independence debate, with Mr Miklinski railed against Ms Sturgeon’s suggestions that an independent Scotland would continue to be part of a UK-wide pensions scheme. 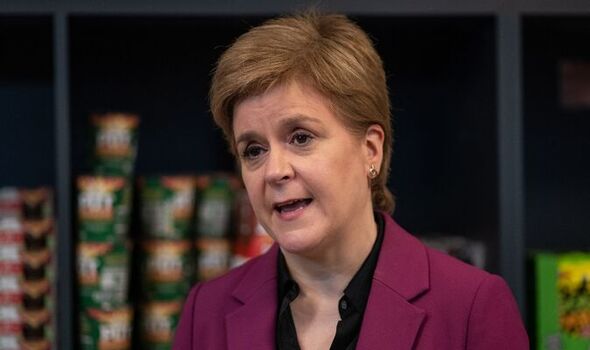 The First Minister has flip-flopped between arguments over who will foot the bill for pensions (Image: Getty)

The First Minister campaigning for ‘Yes’ in 2014 (Image: Getty)

“It’s an attempt to throw into the mix more confusing information to allow them to say something that their faithful will follow.”

Ms Sturgeon claimed in early February that UK taxpayers would continue to fund Scottish pensions post-independence, before conceding this would be unlikely.

Kate Forbes, the SNP Finance Secretary, stated the UK would pay the pensions of Scottish OAPs in a post-independence country, adding the system would be “unaffected” after a Yes vote.

Calling SNP’s Westminster boss Ian Blackford the “expert on all things pension”, she pointed to his comments that “commitment to continue to pay pensions rests with the UK Government”.

Mr Miklinski said: “The reality is that there is no pension pot, it comes out of current income, and taxes. Scotland will have to pay.”

He described how there would likely “be a negotiation on other areas”, but if the SNP were to “get to the ballot box for a referendum”, they would have to also consider how an independent Scotland would manage job security, mortgages, council services, as well as pensions.

DON’T MISS:
‘Remoaners are regrouping’ Dan Wootton warning over Brexit as liber…[REPORT]
Brexit POLL: Do you think a second Macron term will be bad for UK? [VOTE]
Putin plot to WIPE OUT Ukraine – entirely from the map [REVEAL]

Having the answers to these questions is “part of the parcel of being part of the United Kingdom”, he added.

He said: “For Nicola Sturgeon and her financial secretary to be claiming that England would be paying Scotland’s pensions is just frankly a lie.”

But the waters are muddied by how the post-independence currency would work, with the majority of Scots confused about how their money would be managed.

In a YouGov poll published on Tuesday, almost three-quarters of respondents said they were not clear on SNP policy for Scottish currency after independence.

The waters are muddied by how the post-independence currency would work, with the majority of Scots (Image: Getty)

Mr Miklinski argued the SNP’s referendum campaign in 2014 was hindered by the population’s uncertainty about currency, with “huge arguments in the SNP itself” creating confusion.

He added: “The debate around whether it would be an independent currency, shadowing the pound, whether it be the Euro – these are all things that Nicola Sturgeon simply hasn’t been willing to state categorically.

Last year, John Ferry of the pro-Union think tank, Three Islands, warned that a new currency could make it difficult to Scots to meet their mortgage payments.

He told the Spectator: “Having a new Scottish currency in play for day one or near day one of independence creates a raft of other risks and uncertainties.

“Those mortgage contracts require repayment in sterling, which means households would suddenly have foreign exchange risk to manage as the value of incomes fluctuates relative to mortgage liabilities.

“A free-floating new currency would almost certainly devalue relative to the pound in reflection of Scotland’s stand-alone economic fundamentals and start-up risks.

“This could leave households unable to afford their monthly mortgage payments.”