Suki Waterhouse showed off her chic style as she left the Byredo store on Melrose Avenue in Los Angeles, California on Tuesday.

The model, 30, wore a black leather jacket over a beige top which she teamed with a brown bucket hat.

She wore a pair of smart black trousers and matching shoes and she carried an orange handbag and white shopping bag over her arm. 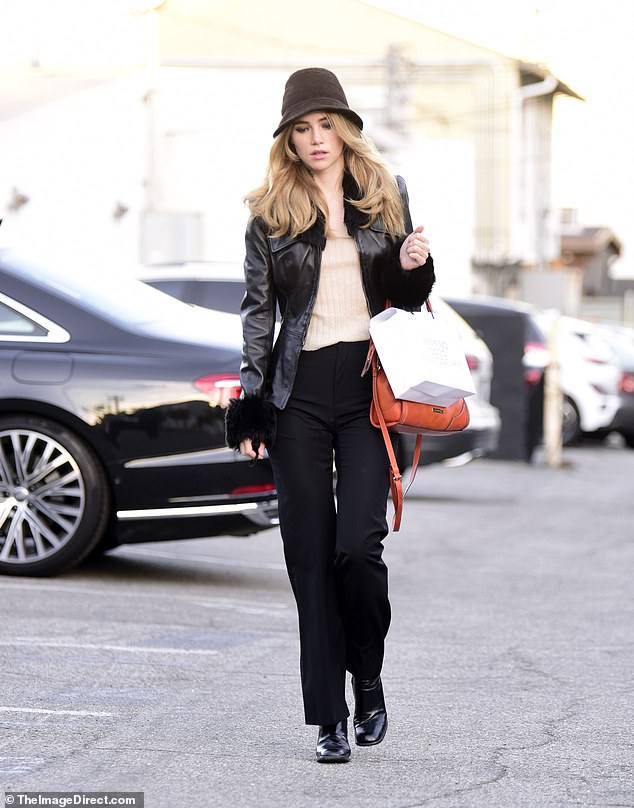 Model behaviour: Suki Waterhouse, 30, showed off her chic style in a leather jacket and bucket hat as she left the Byredo store on Melrose Avenue in Los Angeles, California on Tuesday

Her long blonde hair was styled into loose waves which rested on her shoulders as she walked.

The star had a serious expression on her face after visiting the shop which sells fragrances, leather goods and accessories made in Sweden.

Her outing comes after she took to Instagram this week to share pictures of herself as she went braless in a white cropped top. 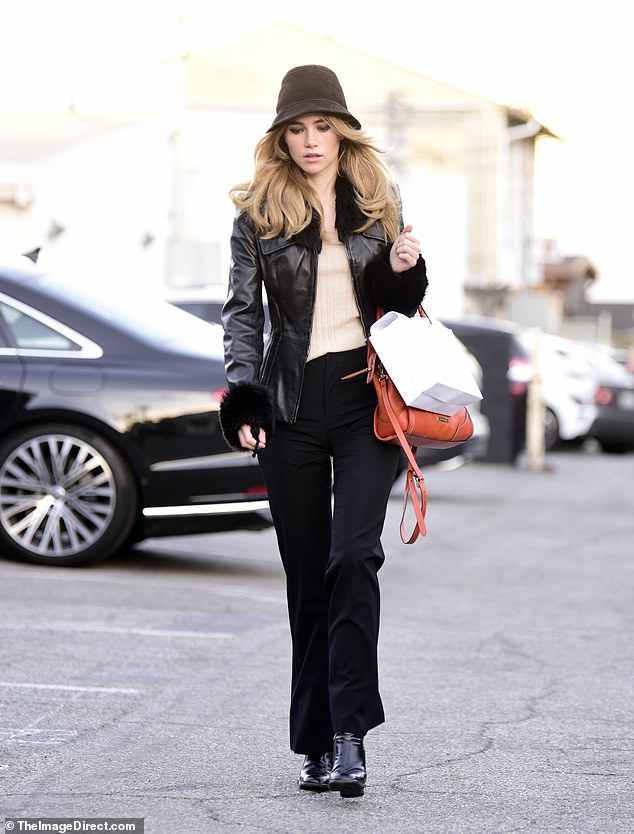 In style: She wore a pair of smart black trousers and matching shoes and she carried an orange handbag and white shopping bag over her arm

She gave her followers a glimpse at her toned stomach as she posed up a storm on a balcony in front of a stunning golden sunset, completing her outfit with blue denim jeans.

Running her fingers through her messy blonde locks, she opted to wear minimal makeup allowing her naturally beautiful features to stand out.

Suki is currently in a relationship with Robert Pattinson, after the pair were first linked in 2018 when they were spotted kissing in their home city of London. 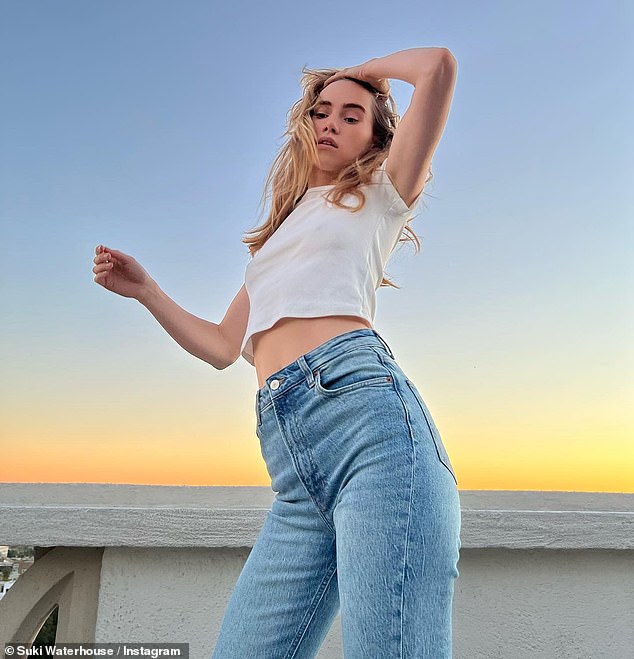 Looking good: A braless Suki sent heartrates skyrocketing after she posed in a white cropped top in a string of snaps shared to her Instagram on Monday 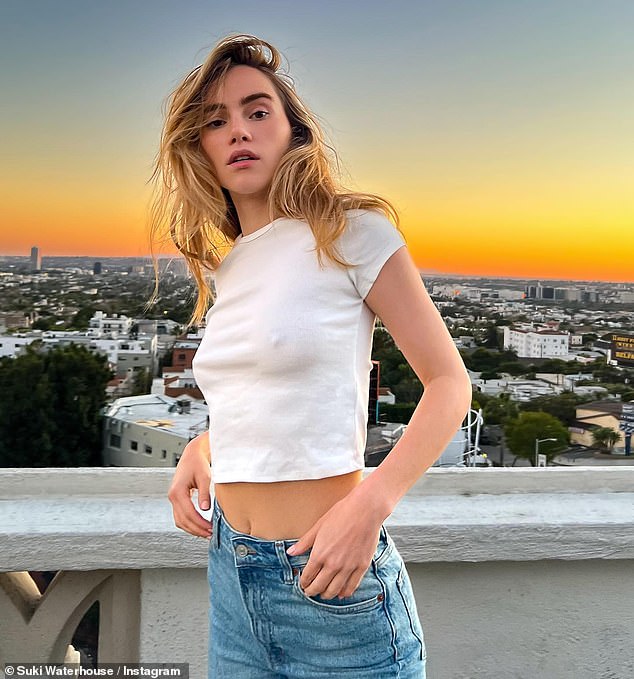 Golden hour: The model forewent a bra under the thin T-shirt, which showcased her toned tummy

In August 2018, an insider told Us Weekly that the pair had been quietly dating for months.

The Tenet actor was previously in high-profile romances with his Twilight co-star Kristen Stewart and singer FKA twigs.

Suki was in a relationship with Bradley Cooper for two years and briefly dated James Marsden.

In November 2021, a source told E! News that the couple’s relationship was going strong after more than three years together.

The insider revealed, ‘They are very solid in their relationship.’

Though the two prefer to keep their relationship out of the spotlight, the source added that they are ‘always just totally joined at the hip’ during their rare public appearances together.

‘You can tell he’s completely in love with her,’ the insider said. 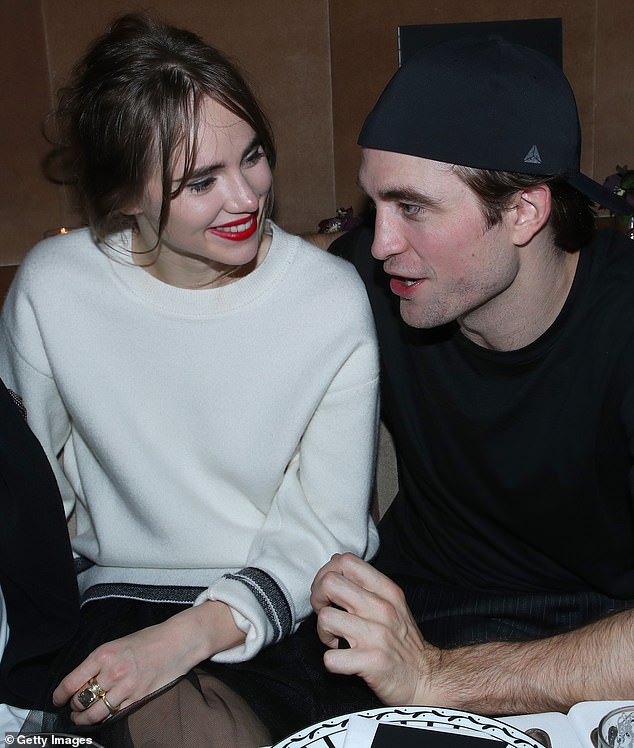 In love? In November 2021, a source told E! News that Suki and Robert Pattinson’s relationship was going strong after more than three years together (seen in 2020)

Khloe Kardashian is NOT dating the Italian actor Michele Morrone

Demi Rose reveals she 'likes girls and boys', says she was the victim of 'parental abuse' in Q&A

Khloe Kardashian is NOT dating the Italian actor Michele Morrone