Susanna Reid has said she felt ‘privileged’ to be able to queue for over seven hours to see the Queen lying in state.

She queued up with her mother, a nurse called Sue, 81, in order to pay her respects in Westminster Hall on Thursday.

Her words come as Holly Willoughby and Phillip Schofield were forced to deny they queue-jumped on Friday after they filmed a segment for This Morning. 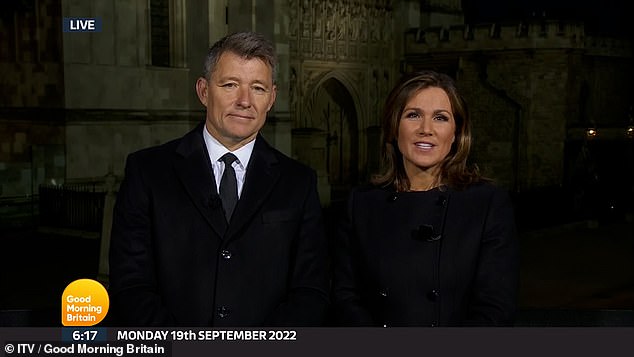 ‘It was a historic opportunity’: GMB’s Susanna Reid said on Monday she felt ‘privileged’ to queue for seven hours to see Queen lying in state

The Monarch will be laid to rest at Westminster Abbey on Monday following her death two weeks ago, aged 96.

Members of the public have been queuing for up to 24 hours to see the Queen lying in state but the queue has now closed.

Speaking on Good Morning Britain, Susanna said: ‘It’s an enormous privilege to have been able to have done that, to pay our respects.

‘Whether you are religious or not, a royalist or not, it feels like a sort of pilgrimage, and a historic moment, a historic opportunity.’

Ben Shephard added: ‘It’s huge commitment, when we were talking and you were in the queue for seven hours and 20 minutes in total with your mum and a friend.

‘When you do anything like that, and endeavour, because it really is an endeavour to stay that long for this moment, you can understand why, for some, they are overwhelmed with emotion.

Susanna continued: ‘When I was in the queue, young children, patiently and uncomplainingly stood for hours. I was so proud of my mum at 81 queuing with me.

She took to Twitter on the day, saying: ‘Evening – along with my lovely mum and her very good friend, I have just experienced a moment in history – witnessing the Queen lying in state in Westminster Hall. At once majestic and peaceful.’

‘If you are planning to queue here are our tips. We joined at 1.23pm near Butlers Wharf and entered Westminster Hall at 8.43pm – 7 hours 20 mins.

‘Wear the comfiest shoes you own. Go with someone if you can, although everyone in the queue was friendly.

‘The first part of the queue is for wristbands. Ours were given out at Tower Bridge about an hour after we began queuing.

‘There is no queue jumping – people waited patiently for wristbands and once you have one you can leave the queue for snacks/loo stops & slip back in.’

On Sunday, This Morning bosses denied show Holly and Phil had ‘VIP access’ and filed ‘past the Queen lying in state’ as they filmed a segment for the programme at Westminster Hall in London on Friday.

The presenters cut sombre figures as they dressed in black and visited the Queen’s coffin to film for the upcoming episode which is due to air on Tuesday, the day after the funeral.

With reports the five-mile long queue had been closed for six hours on Friday, boosting the wait time to ‘at least 14 hours’, the TV duo were said to have joined a separate queue and were taken into a press gallery.

On Saturday evening, ITV bosses bosses posted a statement on Instagram which denied the pair had received special treatment: ‘Hello everyone, we would like to clarify something,’ it read.

‘We asked Phillip and Holly to be part of a film for this Tuesday’s programme.

‘They did not jump the queue, have VIP access or file past the Queen lying in state – but instead were there in a professional capacity as part of the world’s media to report on the event.’

An ITV spokesperson added in a statement to MailOnline: ‘This Morning had press accreditation and like other media, Phillip and Holly were escorted to work from the press gallery by government staff.

‘They did not file past The Queen’s coffin. They were there alongside a host of other broadcasters and national press outlets for an item that will be broadcast on Tuesday’s show. Any allegations of improper behaviour are categorically untrue.’

The broadcasters donned all black ensembles, with Holly, 41, in a face mask, as they made their way into the historic building where the late monarch was lying in state following her death last week.

A source told MailOnline: ‘They did not get to pay their respects to the Queen in the same way as queuing members of the public but they filmed in a section put aside for press.

‘This Morning’s Friday show has been cancelled in favour of rolling ITV news coverage in the lead-up to the Queen’s state funeral. The programme will be back on screens on Tuesday.’