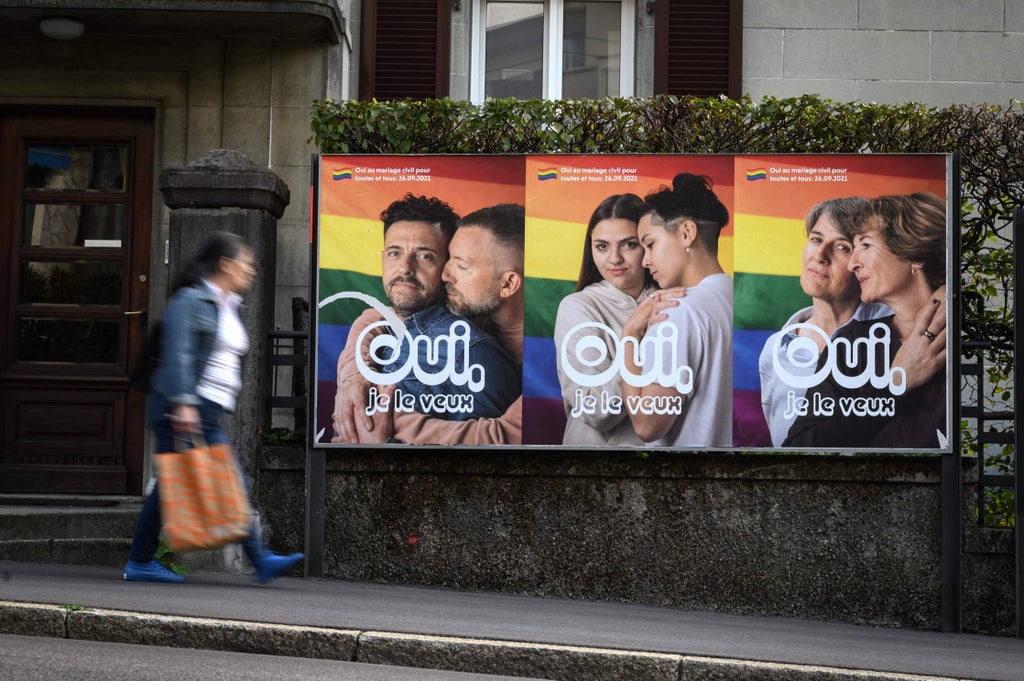 Swiss voters appear to have decided by a clear margin to allow same-sex couples to marry and adopt children, according to a projection after a national referendum on Sunday.

A projection by the gfs.bern polling agency for Switzerland’s public broadcasters showed that 64 per cent of voters had backed the legalisation of same-sex marriage, while just 36 per cent had voted against the measures.

Switzerland’s federal government and parliament had already approved the amended “Marriage for All” legislation, but opponents led by the right-wing Swiss People’s Party (SVP) forced a referendum on the issue under the country’s system of direct democracy.

The Alpine nation has authorised same-sex civil partnerships since 2007, though it is one of the last countries in Europe to outlaw same-sex marriage.

The amended law will make it possible for same-sex couples to get married, and to adopt children unrelated to them.

Married lesbian couples would also be allowed to have children through sperm donation, which is currently legal only for married heterosexual couples. It will also make it easier for foreign spouses of a Swiss individual to get citizenship.

Opponents of the law have faced criticism for allegedly using unfair tactics during their campaign.

In a provocative campaign, activists used images of crying babies while LGBT hotlines were flooded with complaints and hostile emails. It marked a stark contrast to proponents waving “Yes, I do” rainbow flags at Zurich and Geneva pride parades.

Same-sex couple Corinne Guntern and Anouk Oswald, from Zurich, told the Reuters news agency that the vote represented an important milestone for their future.

“I want to be able to choose for myself if I want to marry this partner next to me and if it’s the right path for us to start a family,” said Ms Oswald, 30. “It’s important to show the younger generation you don’t need to hide.”

Ms Guntern, also 30, said it was not fair that a single woman could adopt a child while a same-sex couple could not.

“Today, if I reach a certain age and I’m single, regardless of my sexual orientation, I can be accepted into the adoption process and apply to adopt a child. But if I’m in a same-sex partnership, right now, I can’t,” she said.

“Of course, a child needs safety and love … but I don’t think it makes a difference whether that’s given by a straight or gay couple,” she added.

A final result in the Swiss referendum is expected to be announced later on Sunday afternoon.

Which food items are most likely to end up in the bin, poll reveals

Royal POLL: Should Queen step back from public duties amid fears for monarchs health? VOTE