Thor actor Chris Hemsworth and his brothers Luke and Liam are investors in ‘de-extinction’ company Colossal Biosciences which has previously announced plans to also bring the woolly mammoth back to the arctic.

The firm has now partnered with Melbourne University to provide its resources and technology to their attempt to reintroduce the Australian marsupial, also known as the Thylacine, that died out almost a century ago.

The TIGRR (Thylacine Integrated Genetic Restoration Research) lab was established with a $5million donation from the Wilson Family Trust in March – but Colossal’s involvement will now supercharge the project and could halve their 10-year goal of bringing back the animal. 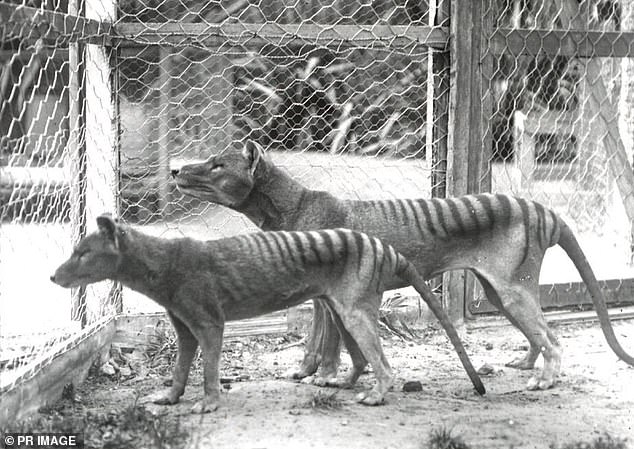 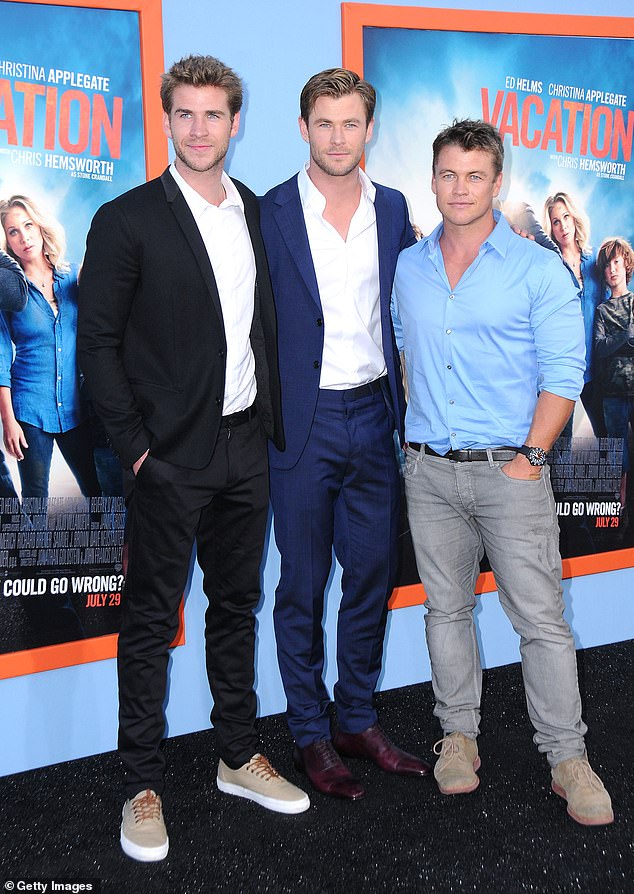 Liam, Chris and Luke Hemsworth are investors in Colossal (pictured together)

That scientists will now expand to 25 along with another 15 scientists working full-time on the project at Colossal’s US headquarters.

Ben Lamm, one of Colassal’s founders, said when announcing the partnership with TIGRR on Tuesday that Hollywood stars including the Hemsworths and tech entrepreneurs, were excited about the company’s work.

‘The Hemsworth family has done a lot in broader marsupial conservation, and they are leading the charge in returning the Tasmanian devil back to the mainland and creating a population outside of Tasmania,’ he said.

‘I got connected to Chris and Luke when we were raising our Series A and decided to invest in the company.’

‘They were incredibly passionate about not just the return of the thylacine but how the technologies Colossal is developing can be used to help with marsupial conservation and gestation. We could not be more excited for their support and involvement.’ 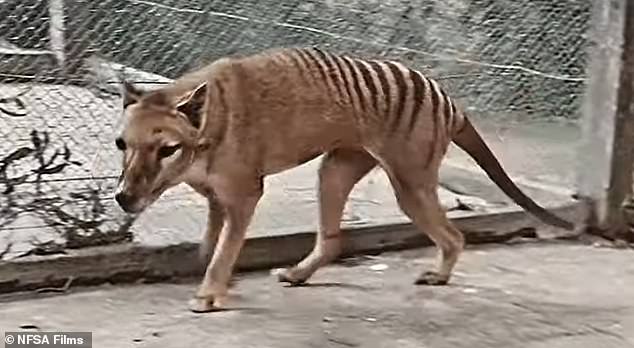 A colorised image of a Tasmanian tiger, the last of which died in 1936 (pictured) 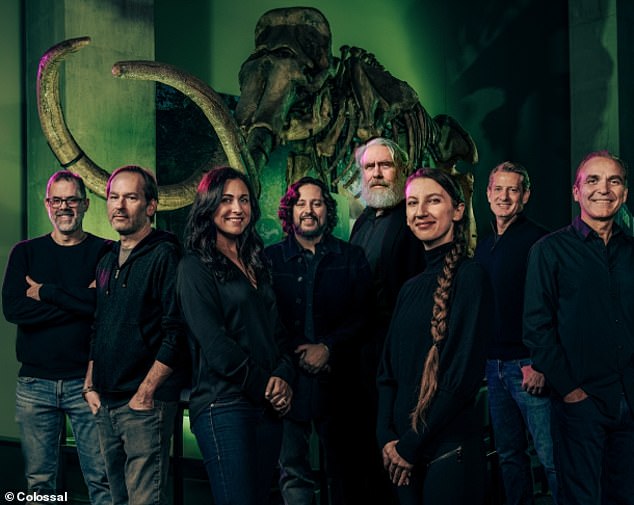 The Tasmanian tiger or ‘thylacine’

The thylacine looked like a large, long dog with stripes and a long stiff tail

The last known thylacine died in Hobart Zoo in 1936

Despite hundreds of reported sightings no conclusive evidence has been provided that the Tasmanian Tiger is alive.

Mr Lamm said it’s much more likely the Tasmanian tiger will return before the mammoth.

This is because the thylacine’s genetic sequencing is more advanced than the mammoth and has a shorter gestation period of just 30 days, compared to 22 months.

Similar to a kangaroo, the Tasmanian tiger is a marsupial – born and then raised in a pouch.

‘Based on the numerous high quality samples preserved and the shorter gestation, the Tasmanian tiger has a potential to be one of the first animals to be returned from extinction,’ Mr Lamm said.

He added the work to restore animals and biodiversity to the environment was pivotal for the planet’s health and that he and his company were not working against nature.

‘We’re bringing back this animal to help stabilise that entire ecosystem, and that’s incredibly important.’

The next steps are to finish sequencing the Thylacine’s genome and then compare that to the closest relative – likely the dunnart mouse which could potentially be used as a surrogate.

‘Our genetics teams then leverage CRISPR and other gene editing tools to make the edits and leverage cloning technologies to transfer the edited nucleus to an egg in order to create an embryo that can either be grown in a surrogate or an artificial womb,’ Mr Lamm said.

‘On the thylacine project, we are in the final analysis phase and will begin genetic engineering soon. Some edits have already started to take place and are being tested for efficacy.’ 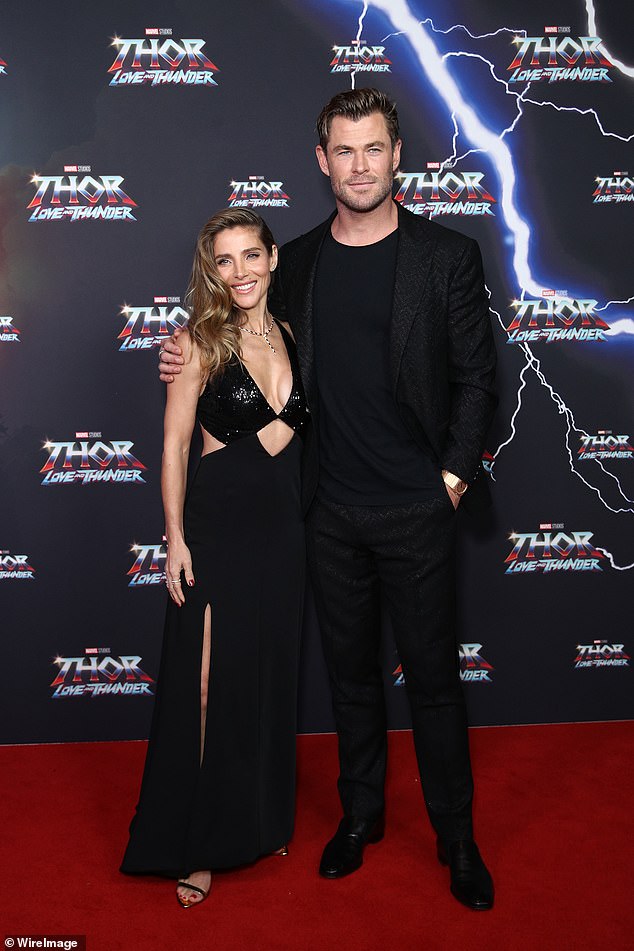 Elsa Pataky and Chris Hemsworth are pictured attending the Sydney premiere of Thor: Love And Thunder at Hoyts Entertainment Quarter on June 27, 2022 in Sydney, Australia 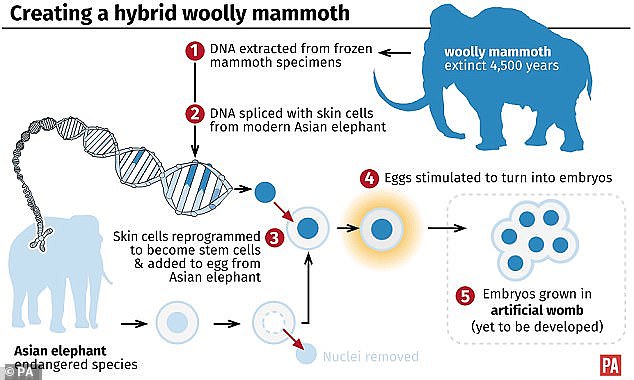 To create an elephant–woolly mammoth hybrid, researchers would take DNA from ancient specimens and combine them with artificial elephant stem cells to create a hybrid embryo. This would be brought to term in either a surrogate mother or an artificial womb

Crispr-Cas9 is a tool for making precise edits in DNA, discovered in bacteria.

The technique involves a DNA cutting enzyme and a small tag which tells the enzyme where to cut.

The CRISPR/Cas9 technique uses tags which identify the location of the mutation, and an enzyme, which acts as tiny scissors, to cut DNA in a precise place, allowing small portions of a gene to be removed

By editing this tag, scientists are able to target the enzyme to specific regions of DNA and make precise cuts, wherever they like.

It has been used to ‘silence’ genes – effectively switching them off.

When cellular machinery repairs the DNA break, it removes a small snip of DNA.

In this way, researchers can precisely turn off specific genes in the genome.

The approach has been used previously to edit the HBB gene responsible for a condition called β-thalassaemia.