‘Tents’ used outside busy A&Es to house ambulance patients  are ‘a danger’ to health and dignity, doctors have warned as the NHS considers assembling more to cope with demand.

The Royal College of Emergency Medicine (RCEM) said the overflow units — built outside at least one hospital already — were ‘borderline immoral’.

Senior sources claim NHS England has instructed trusts to call the facilities ‘temporary external structures’ rather than ‘tents’ or ‘sheds’ to avoid stigma.

This unit, which looks like a mobile breast cancer screening point, allows up to five patients to be cared for by ambulance staff until they can be admitted to the emergency department.

The units are designed as a makeshift waiting room for ambulance patients with non-life-threatening conditions when A&Es are overrun.

But Dr Katherine Henderson, president of the Royal College of Emergency Medicine, said they do not have standard hospital safety features and could contribute to the spread of Covid.

She said that putting patients in the tents is ‘a bad, borderline immoral bodge job to treat the symptom rather than cause’ and a ‘danger to patients’ health and dignity’. 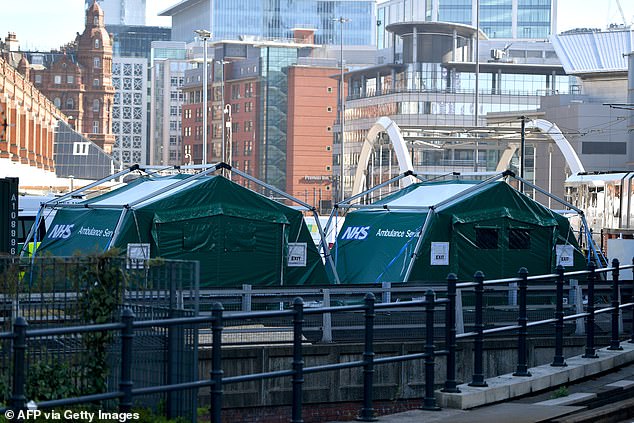 Royal Cornwall Hospitals and the South Western Ambulance Service NHS Foundation Trust have erected handover units for patients with non-life-threatening conditions to wait at hospitals. Pictured: Ambulance Service tents have outside of the Nightingale Hospital North West in April 2020

The NHS has advised other trusts that they could also build the structures outside of busy emergency departments to cope with record waiting times.

The structures were used by some A&E departments during the pandemic but the Cornwall trust is now thought to be the only trust using the temporary ‘tents’.

Pressures on emergency departments hit record levels this winter, with more than 120,000 patients waiting longer than four hours to be admitted and 16,000 queuing for more than 12 hours at the January peak.

And a quarter of ambulances failed to meet the 30 minute deadline for passing patients over to hospitals in the week to March 20 , with top medics warning pressures in emergency care are at ‘dangerous levels’.

NHS England data shows 24 per cent of ambulances queued for more than the 30-minute deadline to handover patients in the week to March 20, which is supposed to take place within 15 minutes.

And 10 per cent of those ambulances had to wait for more than an hour.

The NHS says a lack of capacity in social care means healthy patients are taking up vital hospital beds, forcing ambulances to queue outside of full hospitals.

Writing in the Health Service Journal, Dr Henderson warned hospitals are ‘full and are struggling to get beds for the patients needing admission’, meaning patients are ‘stuck in the back of ambulances’ and on trolleys in hospital corridors.

She warned a lack of capacity in the social care sector is driving the problem, so money would be better spent recruiting and training community staff.

Outbreaks of norovirus in schools and nurseries have more than doubled in a fortnight, official figures show.

There were 113 outbreaks – defined as at least two cases – of the highly infectious vomiting bug in educational settings in the two weeks to March 13, up from 50 a fortnight earlier.

The UK Health Security Agency has blamed the rise on increased mixing following the release of all Covid restrictions on February 24.

Anyone experiencing the illness should stay at home and not attend the office or schools until 48 hours after symptoms have cleared, it said.

Rates of the highly-infectious norovirus also rose by a third in care homes in the most recent period, with 80 outbreaks.

A rise in cases among care home residents – the most vulnerable – is usually followed by a spike in hospital outbreaks.

The UKHSA has warned there could be an ‘out of season’ boom in norovirus and other winter illnesses suppressed during the pandemic now that Covid rules have been scrapped.

Dr Henderson said erecting ‘tents or sheds’ in front of emergency departments is being presented as a ‘solution’ to the problem which is ‘completely unacceptable’.

The ‘tents’ do not have the ‘usual safety features of a hospital’ and while Covid rates are high the tests ‘pose a risk of cross infection’, as well as being a ‘danger to patients’ health and dignity’, she warned.

Dr Henderson said: ‘This increases trolley capacity “temporarily” in theory. This releases the ambulance crew to go back out to tend to another patient and bring them back to the hospital to add to the queue again.

‘One tent that is already open in the South West became immediately full and has made no difference. In some cases, patients are receiving all their emergency care in a car park.

‘But the blindingly obvious problem here, as ever, is staffing. Neither hospitals nor the ambulance service has enough staff to cover another clinical area, let alone a tent.’

She said the health service cannot ‘continue to have faulty sticking plasters being applied to gaping policy wounds’.

A&E ‘tents’ do not address ‘the root cause’ of a lack of social care staff which are behind delayed hospital discharges, Dr Henderson said.

Previous attempts to expand bed capacity with the Nightingale Wards was a ‘failure’, with three of the £3million facilities currently being dismantled, she said.

Dr Henderson added: ‘Trust leaders and NHS England must not be afraid to stand up and make this case – putting patients in tents is a bad, borderline immoral bodge job to treat the symptom rather than cause, and our patients need to see some real leadership to protect them.’

An NHS spokesperson said: ‘Ambulance providers are under incredible pressure with latest figures showing 999 calls for February increased by almost a third on the same month last year while hospitals are receiving high numbers of patients by ambulance each week.

‘So, it is right that acute trust staff work with colleagues in ambulance providers to find safe and effective solutions to reduce handover delays.’

She said: ‘The mobile unit is for patients with non-life-threatening conditions, who are still under the care of the ambulance service, and will enable ambulance crews to get back out on the road to care for other patients.

‘Patients with urgent but not life threatening conditions can access convenient care by calling 111 or go online at 111.nhs.uk, after considering first if they can wait to see their own GP or get advice from a pharmacy.’