The siren, 50, was first spotted in Mykonos, Greece with her new husband Luis Ruelas whom she tied the knot with in East Brunswick, New Jersey two weeks ago.

Then on Friday the Bravo standout was seen on his Insta Stories in a bikini top and skirt as she took a speedboat ride with her spouse on the Mediterranean in the Italian coastal town of Positano. 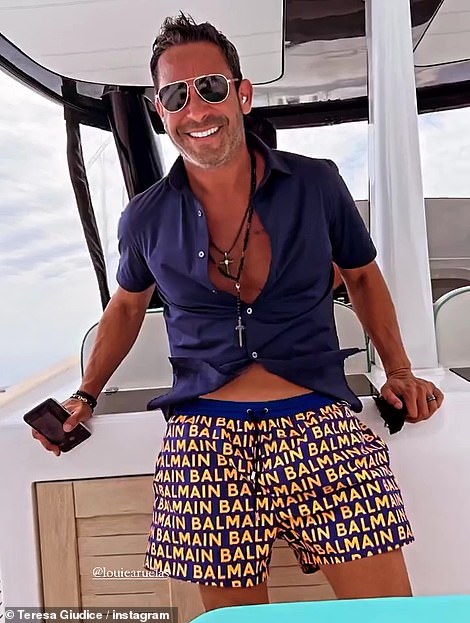 Now in Italy: Teresa Giudice and her new husband Luis Ruelas were seen on their honeymoon in Positano, Italy on Friday. On the left she is seen in a bikini top while on a speedboat. On the right Luis is in Balmain shorts and a shirt 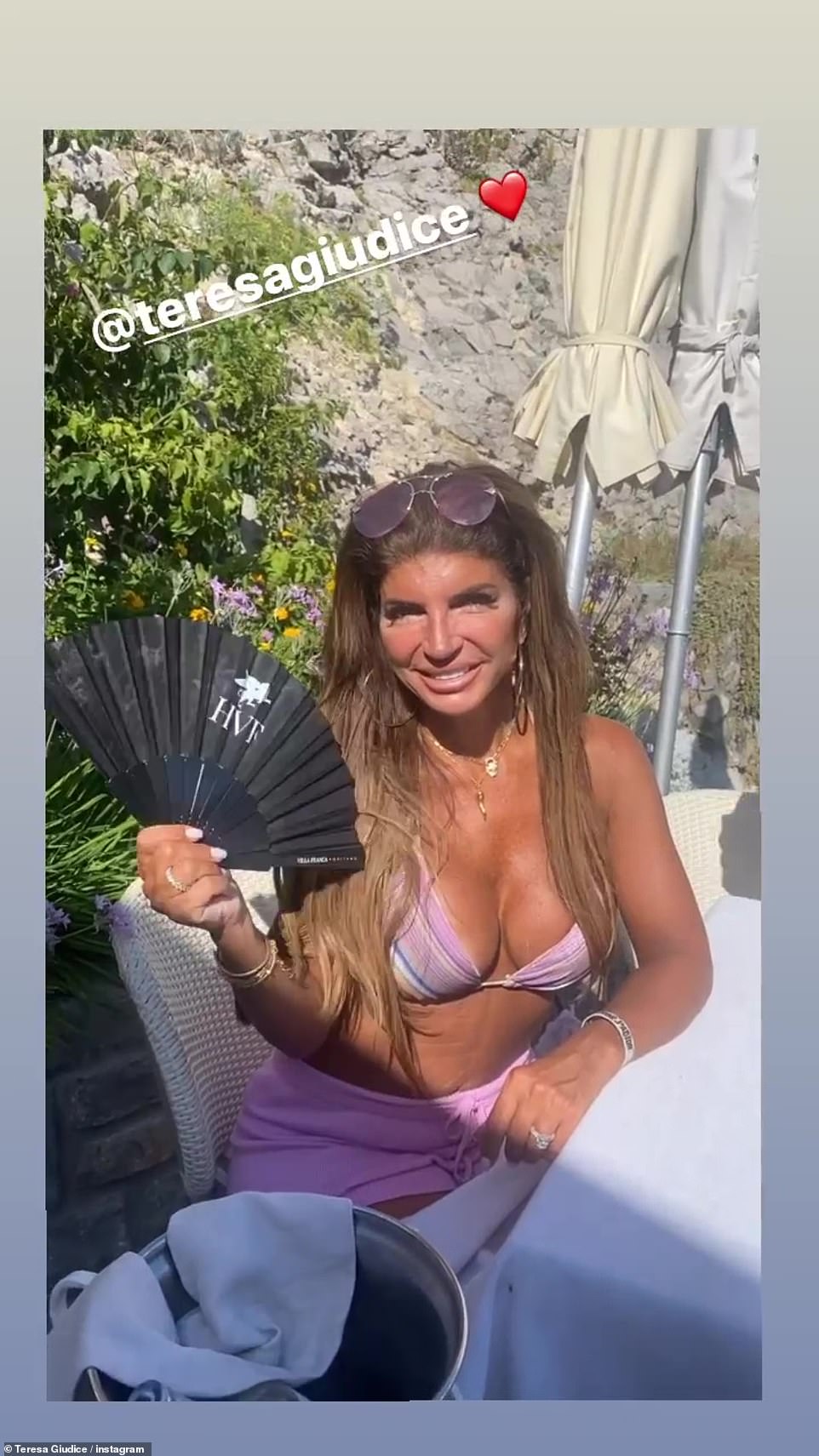 Happy wife: The TV diva held up a black fan as she flashed her new wedding band with her diamond engagement ring

The ex of Joe Giudice also shared several photos and videos from her hotel high on the mountain, revealing a beach below.

The mother of four was also seen in a lavender outfit with her hair down as she sat on the speedboat smiling at her new husband as he filmed her.

Her new wedding band from Luis could also be seen as it was placed next to her diamond engagement ring.

And they were seen enjoying fish and pasta over glasses of wine al fresco at a restaurant. They clinked glasses as she added a red heart emoji to the post.

They were last seen on the Greek island of Mykonos. 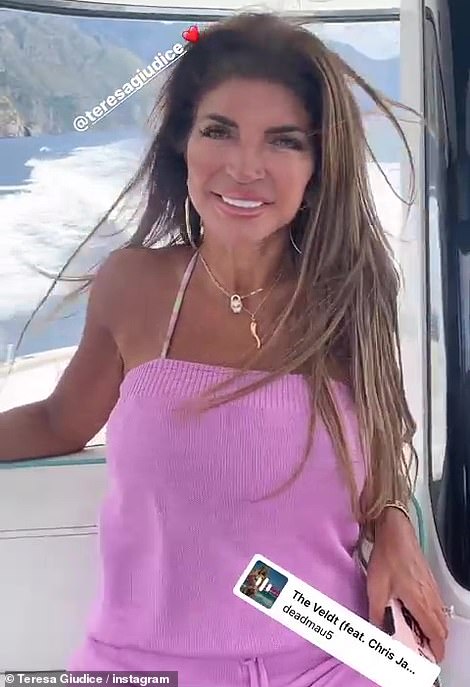 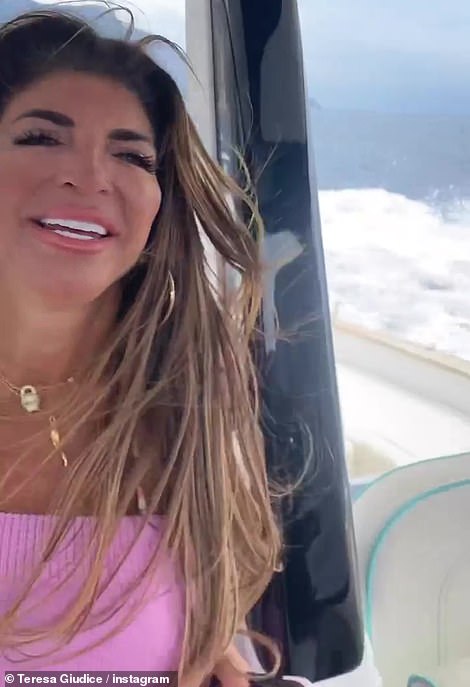 So in love! The mother of four was also seen in a lavender outfit with her hair down as she sat on the speedboat smiling at her new husband as he filmed her 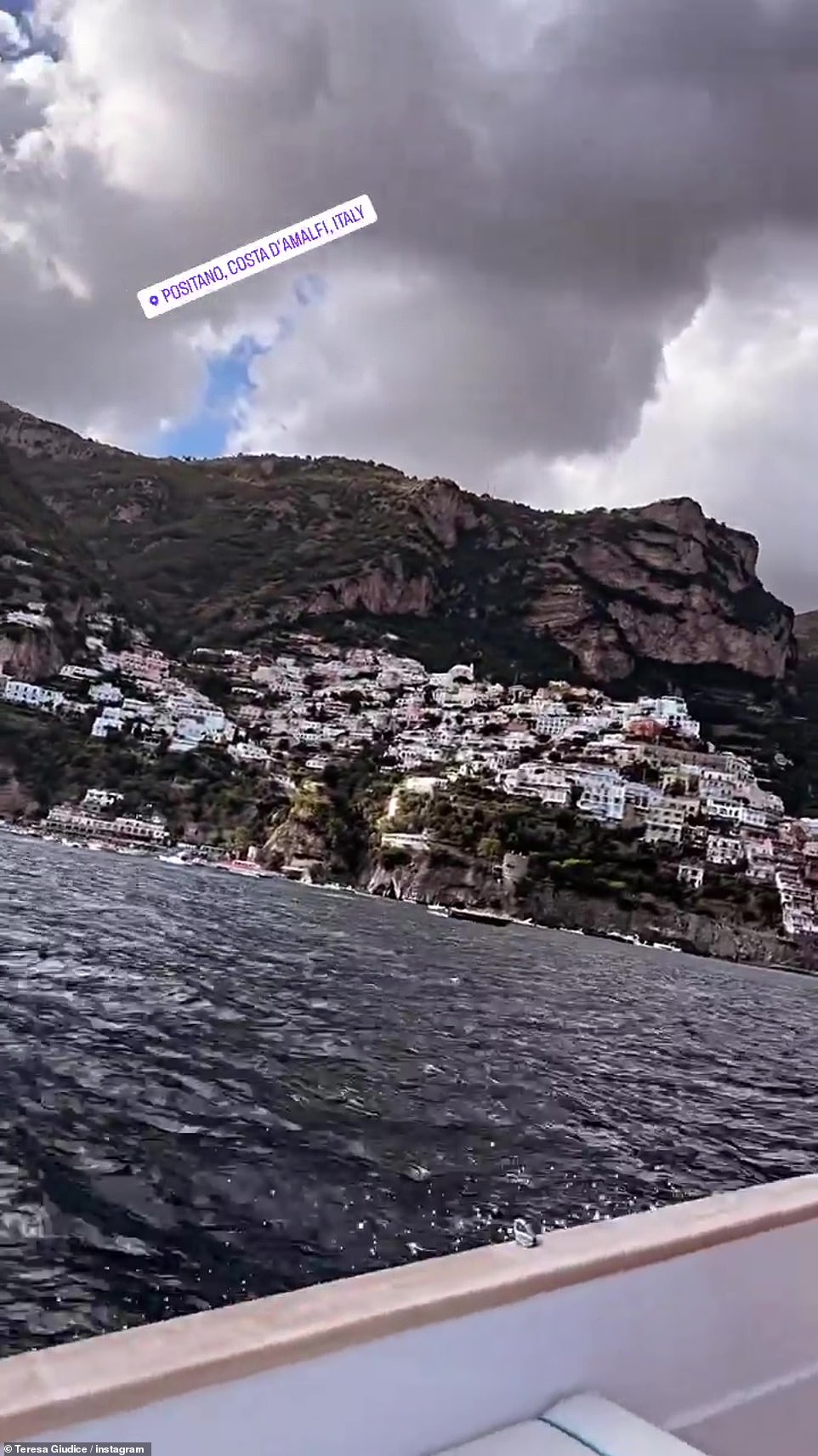 A gorgeous view: She shared a look at Positano from the speedboat as they headed out for a day at sea

She was in an orange bikini as she sipped wine. He was shirt free in orange swim trunks and flip flops as she cooed, ‘I love you honey.’

She also shared a look at the colorful sculptures at Nammos on Mykonos.

The two have been having fun on the island after tying the knot in front of friends and family in New Jersey.

On Monday the brunette beauty was seen in a pale blue string $620 bikini by Fendi as she walked up the beach and blew a kiss. 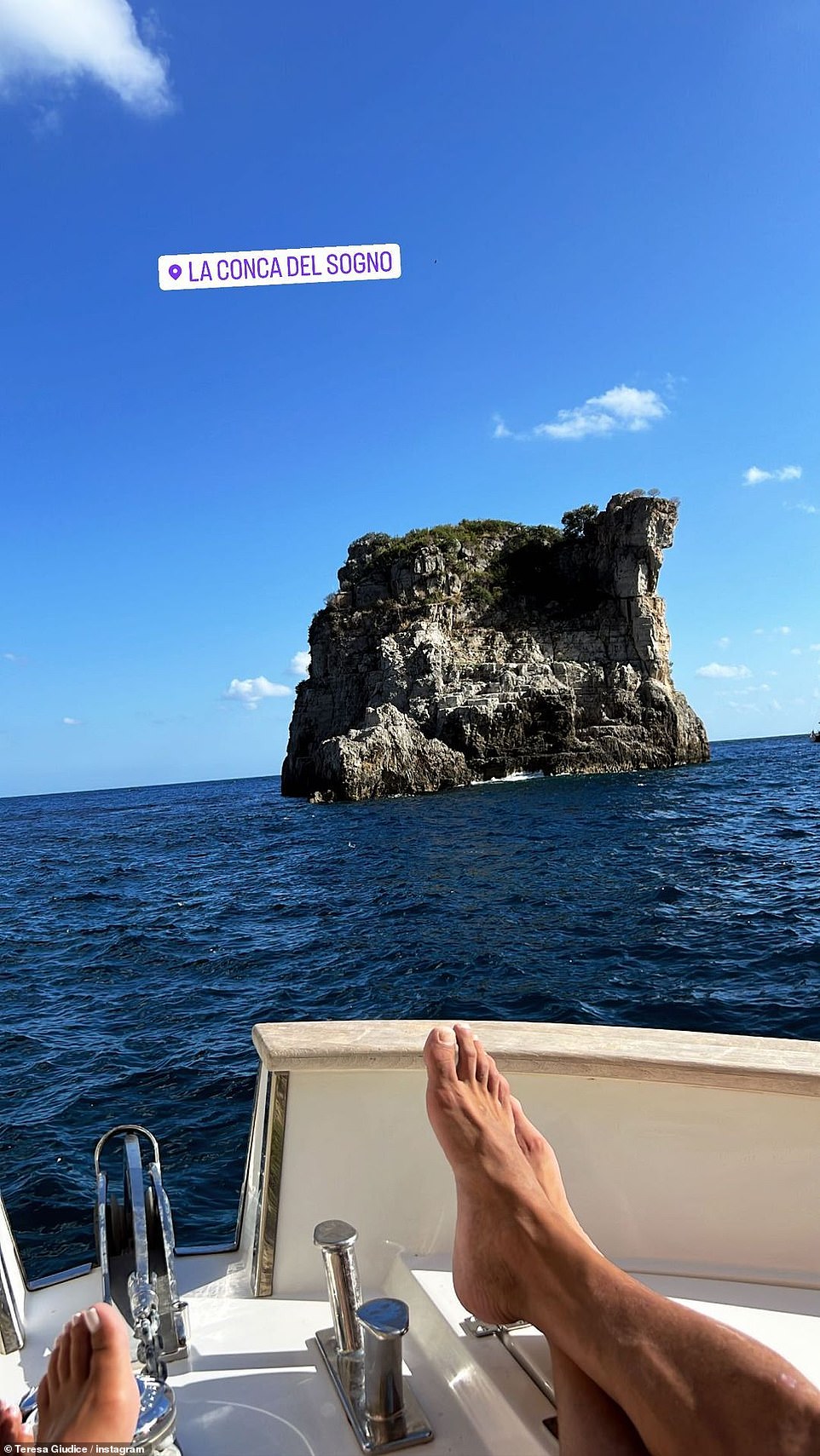 Side by side: Their feet were seen as they sunbathed on the boat while by La Conca Del Sogno 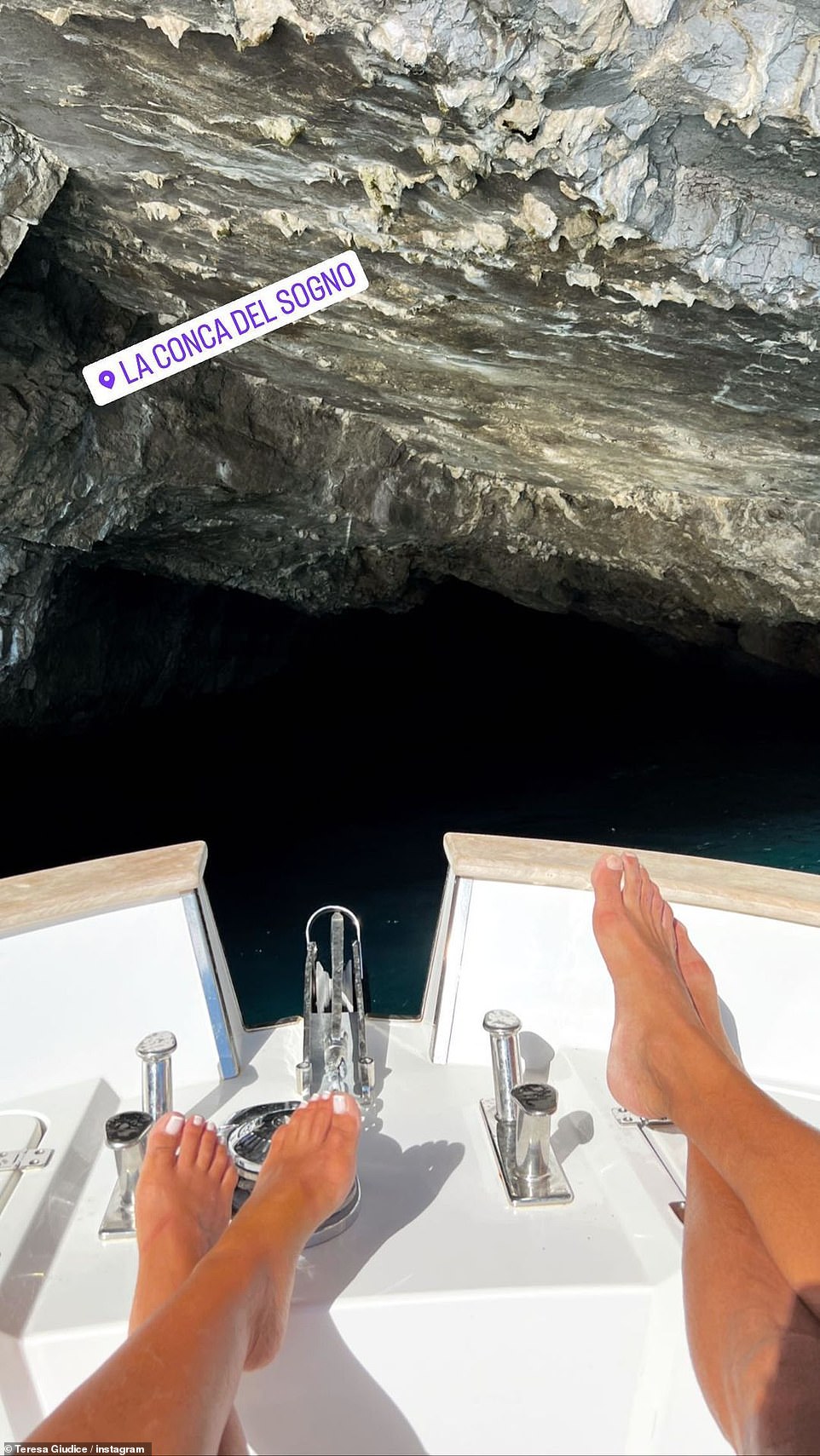 Checking out an island cave: They were near the rocky island which seemed to have a small cave

The video was shared by her new husband.

DailyMail.com was the first to break the news that the New Jersey lovebirds would be celebrating their first week as man and wife in Greece.

Teresa showed off her abs in the tiny suit as she walked up the beach Bond girl style with her skin wet.

Her husband Luis added to her Insta Stories, ‘Love you forever.’

The reality TV diva was also seen on a swing as she wore colorful slacks and flip flops. 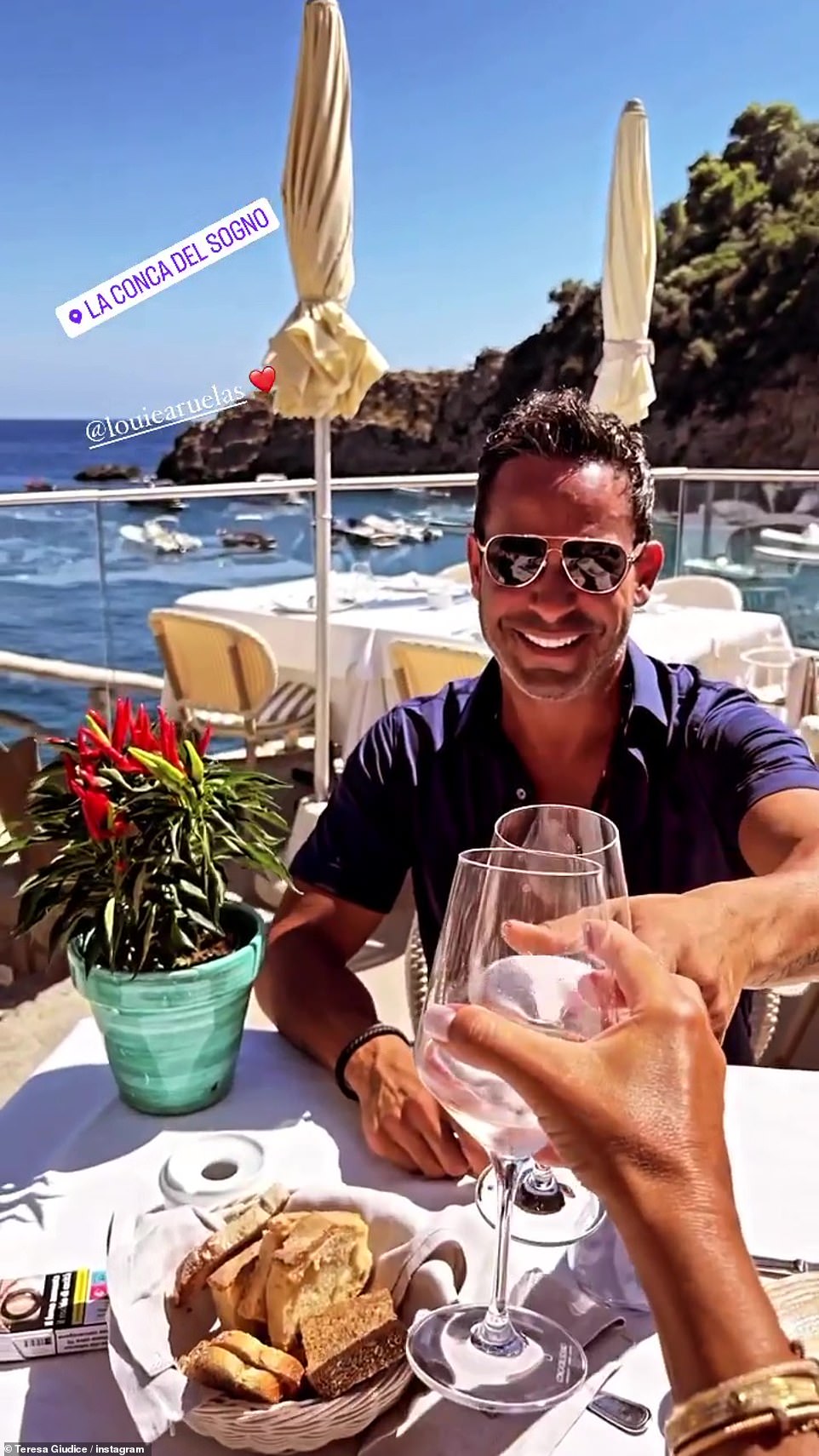 Manga! And they were seen enjoying fish and pasta over glasses of wine al fresco at a restaurant. They clinked glasses as she added a red heart emoji to the post 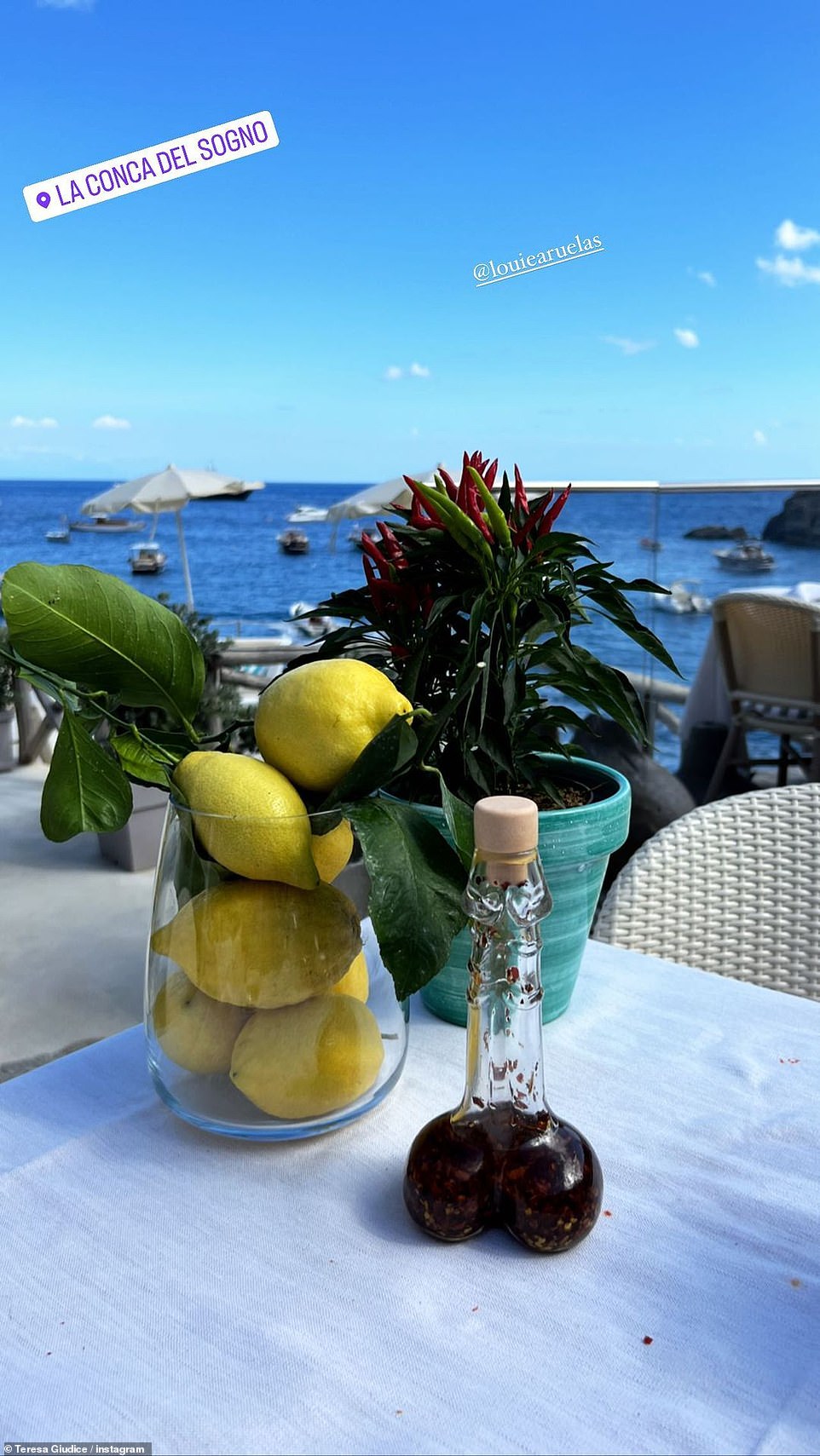 Oil and lemon: Teresa shared a look at their lunch table with a vase of lemons and a bottle of oil

Teresa shared several images of Luis in Greece while wearing Balmain shorts and carrying a Christian Dior bag as he beamed with pride over being a new husband.

And they both shared video from their scenic hotel called the Calilo which was white with stone accents and plenty of areas to swim and sunbathe.

A source informed DailyMail.com last week that the lovebirds are honeymooning in Greece because the country holds special meaning to them. 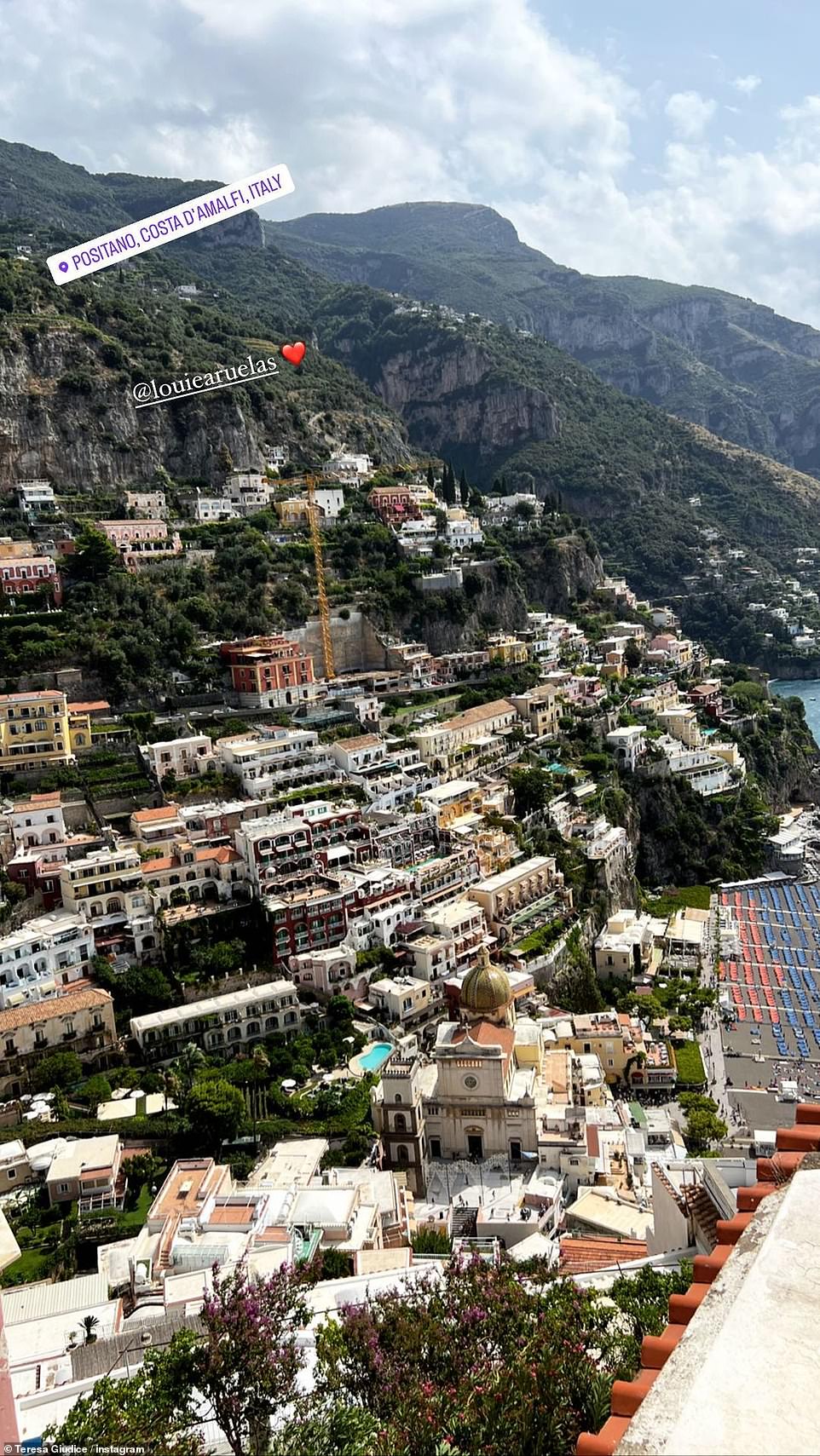 So much to take in! She shot an image of the town of Positano with the homes, shopping center and beach below

‘It’s a very special place for them, and they’re looking forward to celebrating their love for one another after the big bash,’ the source explained.

The destination is where the TV personality accepted her man’s proposal under a firework-lit night sky after a year of dating as a single violinist played nearby.

On Saturday, DailyMail.com was there to witness the Real Housewife of New Jersey and queen of reality TV – appropriately wearing a crown and dripping with jewelry – as she nervously held a piece of card from which she read the vows she had written herself.

Giudice and Ruelas, 46, tied the knot Saturday at the Park Chateau Estate & Gardens in East Brunswick, New Jersey in front of 220 guests.

The New Jersey housewife walked down the aisle to Ave Maria in honor of her late parents. 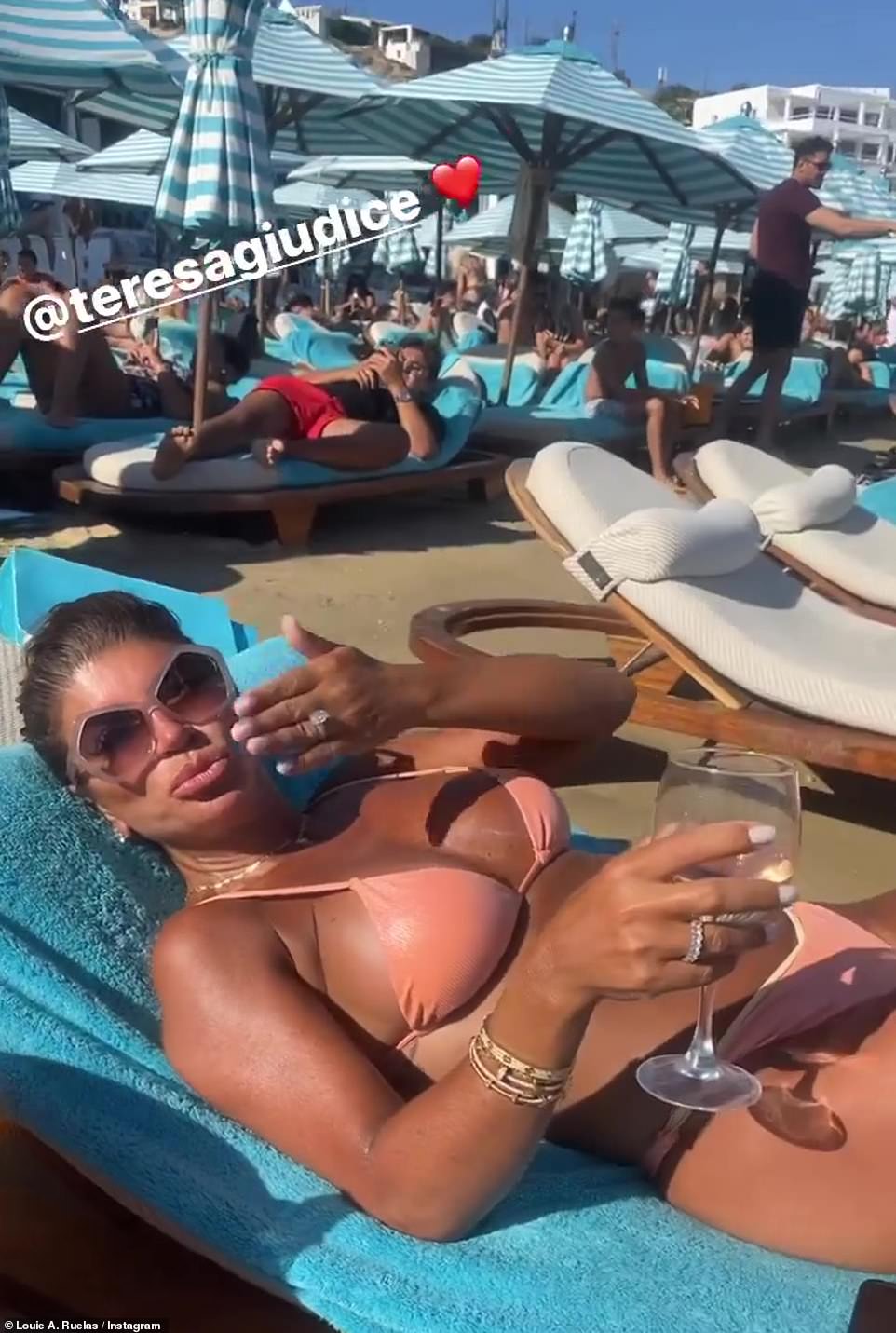 Too hot! She was seen in a peach string bikini with tinted sunglasses on as she sunbathed on the beach in Mykonos, Greece

Ruelas’ two sons, David and Nicholas, also stood by their father’s side.

Each of the kids, all from prior relationships, joined Giudice and Ruelas in the lighting of the ceremony’s unity candles, People Magazine confirmed.

The ceremony, keeping with the theme of family ties, was officiated by the groom’s sister, Dr. Veronica Ruelas.

While announcing her engagement last year, she captioned footage from the night: ‘My Fiancé you are such a beautiful person inside and out. I love everything about you especially your heart and the way you treat me and my daughters.’ 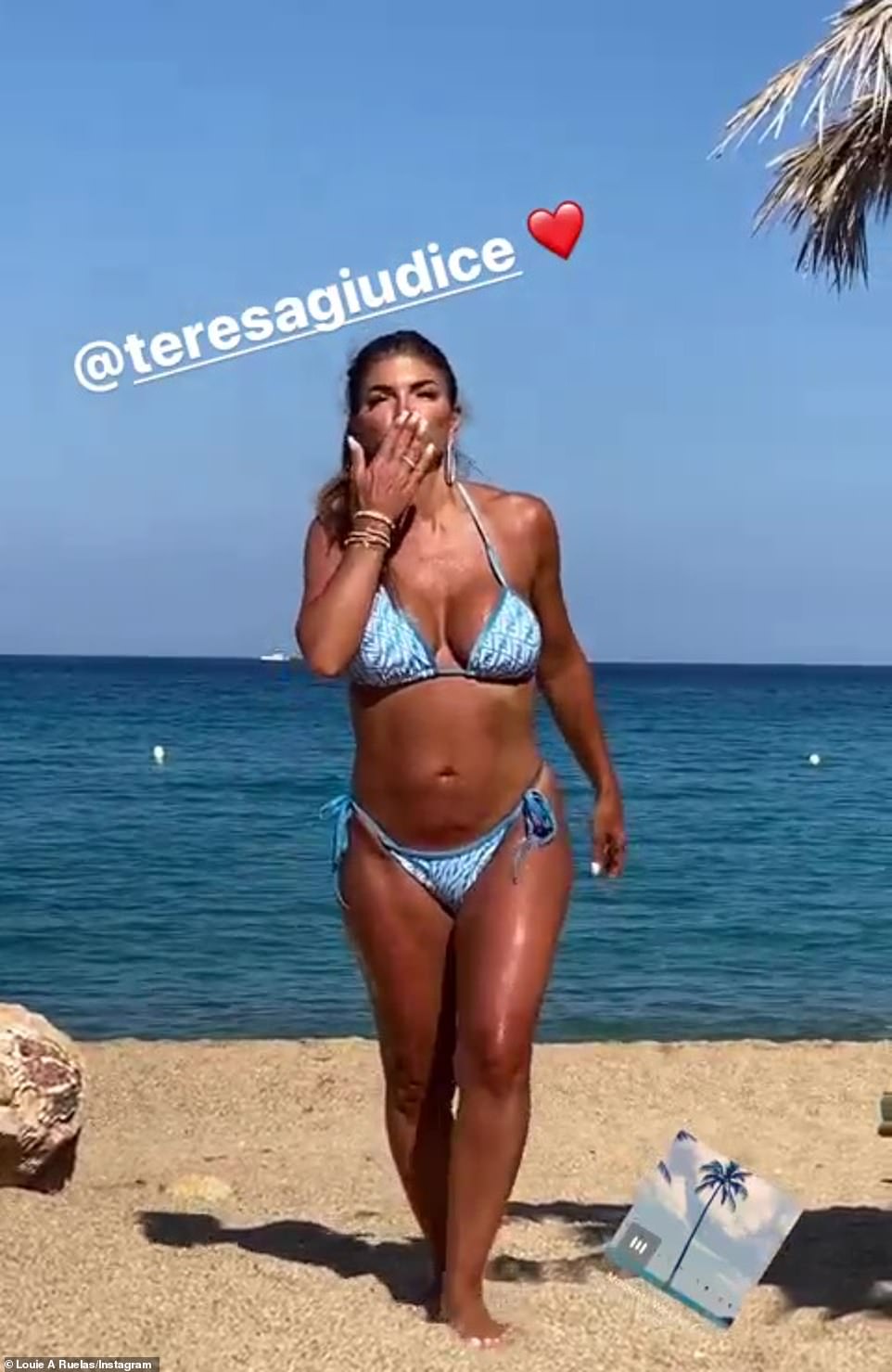 Kisses for her husband: As she walked up the beach in Greece the star blew a kiss to her man 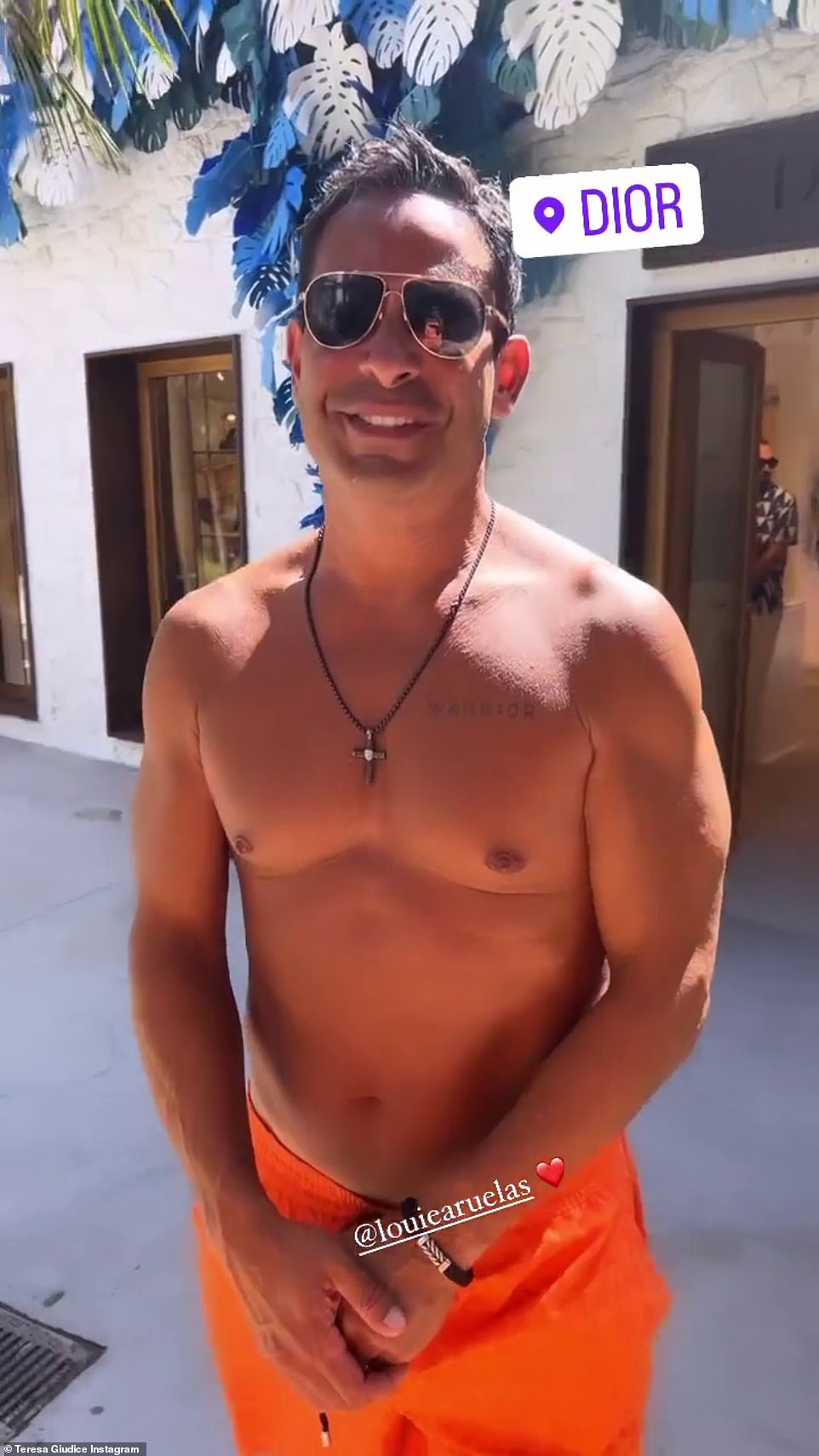 All love: The beauty also shared a video of her husband Luis Ruelas shirt free in orange swim trunks and flip flops as she cooed, ‘I love you honey’

‘You are amazing in so many ways one thing I admire about you is what a great Dad you are. I am so lucky to have found you thank you for coming into my life,’ she continued.

Then, the mom-of-four mentioned her late parents. ‘I know my parents sent you to me from that day I prayed to them on Bay Blvd. I adore you endlessly. You are the love of my life, my soulmate and my everything. I Love you.’

The proposal setup included candles in the shape of a heart and and large light-up letters bearing the words ‘marry me.’

It came during their vacation on Hydra Island, two years after Teresa finalized her divorce from husband of 20 years, Joe Giudice.