Taliban and al-Qaeda could ‘join up’ warns security expert

The news comes as the US announced the completion of a CIA operation after months of planning to kill the man who replaced former leader Osama Bin Laden. However, the use of yet another drone in Afghanistan’s airspace has infuriated Taliban leaders in the country, who have condemned the attack nonetheless. The missile, an R9X Hellfire used six spring-loaded sharp blades in the final seconds of its trajectory to kill a target.

Following the strike, there was no evidence of explosions or damage, suggesting the missile did not have a conventional warhead.

Taliban members were quick to secure the scene and keep reporters away, but a green tarpaulin had been seen covering the area where the impact hit.
Reports suggest two of the missiles were fired from a drone toward al-Zawahiri in the attack.

Hellfire missiles, mostly made by Lockheed Martin are precision-guided munitions for air-to-ground strikes that normally cause significant damage, taking down whole buildings and killing or severely injuring anyone nearby.

Social media images of the strike pointed to the hallmarks of a modified Hellfire.

Sources familiar with the weapon said it is largely aimed at individual targets, such as militants in Syria. 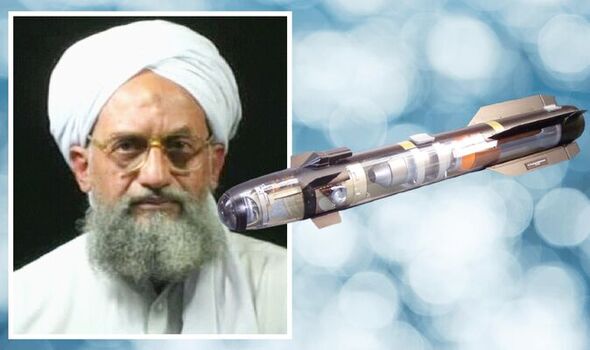 The R9X has six sharp blades instead of a warhead (Image: Getty and Stahlkocher)

The images showed windows destroyed on the second floor while the structure of the house remained intact despite being hit by the missiles.

More than 29 entities have the Hellfire missile, but very little is acknowledged or publicly known about the modified version.

A Pentagon spokeswoman referred a query by Reuters on the R9X missiles to US Special Operations Command, which would be the prime purchaser of the missile.

The US Government watch as Bin Laden is killed by Navy SEALS (Image: Getty)

The US has killed over 14,000 people with drone strikes (Image: Getty)

Much debate has circulated over the use of drones in modern warfare, in particular, the excessive use of armed drones by the US.

According to “The Empire Files”, the latest drone strike although celebrated as a victory against terrorism, should not mask the fact many innocent people have suffered at the hands of such weapons.

Writing on Twitter, The Empire Files wrote: “US drone strikes have killed approx 900 children—around 200 in Afghanistan, including last strike that killed 7 kids at once.

“Celebrating a rare instance where only the “intended target” was killed gives support to that broader criminal policy.”

Many civilians have died as a result of US drone strikes (Image: Getty)

According to The Bureau of Investigative Journalism, there have been over 14,000 US drone strikes between the years 2010 and 2020.

The figures also suggest between 283-454 of these were children.

Speculation has already started as to who will replace the former leader of the group, with many suggesting a successor will be appointed.

However, since the rise of Daesh, many have suggested Al-Qaeda has lost its appeal to jihadist fighters whom many claim were demotivated by al-Zawahiri’s long and monotonous speeches.

Saif al-Adel is already tipped to take over the leadership, but is already a wanted man (Image: Getty)

Many now tip former Egyptian special forces officer Saif al-Adel to take up the reigns as the leader having held senior positions within the group.

The United States is offering a reward of up to $10 million for information leading to his arrest.

Al-Adel was suspected of involvement in the assassination of Egyptian President Anwar Sadat in 1981, and left the country in 1988 to join the mujahedeen fighting Soviet occupation in Afghanistan.

One of Al-Qaeda’s leading military chiefs, and often called the third-ranking Al-Qaeda official, al-Adel helped to plan the bomb attacks against the American embassies in Nairobi and Dar as Salaam in 1998 and set up training camps for the organisation in Sudan, Pakistan and Afghanistan in the 1990s.