Terrifying video shows how SPEAKING can spread Covid – with infected hairdressers, doctors and dentists all able to transmit the virus while leaning over patients and customers

By Joe Pinkstone For Mailonline

Hairdressers, beauticians and medical professionals who are infected with Covid-19 can spread the virus to their patients and clients just by talking, a study has found.

Footage shows how particles expelled from a person’s mouth as they speak can swirl and spread into the proximity of other people, even when wearing a mask.

Previous studies have found rapid ejections of droplets and aerosols, such as by sneezing or coughing, dramatically increases the risk of spreading the virus.

But the new study supports the theory that talking provides enough force for exhaled particles to be an infection risk.

Plastic face shields do NOT protect against Covid-19

Face shields offer no protection against coronavirus if an infected person nearby sneezes without a mask on, a study shows.

Researchers used computer models to visualise the spread of droplets around a face shield ejected by a human sneeze from 3ft (1m) away.

It reveals ‘vortex rings’ produced by the sneeze carry infectious particles to the face shield in less than a second and stick to the edges of the plastic.

Researchers say if the timing of this wave of coronavirus particles coincides with the face shield wearer breathing in, the person can become infected.

Previous research has found the shields are also useless at trapping aerosols, indicating an infected person wearing one can still spread the virus.

They recreated scenarios where a person leans over another person, such as when washing hair or conducting a dental examination.

A volunteer leaned over another person and exhaled after breathing in smoke from an adapted electronic cigarette which produced artificial smoke consisting of droplets about one-tenth of a micrometre in diameter, similar to the size of a virus particle.

Chemicals in the smoke mixture — a mixture of glycerin and propylene glycol — create a cloud which scatters light when illuminated with a laser.

This allows for visualisation of airflow patterns.

In the study, published today in Physics of Fluids, the participant wore a mask, no mask and a visor while standing, sitting, facing down or lying face up.

They were instructed to repeatedly utter ‘onegaishimasu,’ a typical Japanese greeting in a business setting after inhaling the vapor.

It was conducted in a hair salon at the Yamano College of Aesthetics in Tokyo and the studied postures were specifically chosen to simulate customer service roles.

‘A significant amount of similar face-to-face contact would occur not only in cosmetology but also in long-term and medical care,’ said lead author Keiko Ishii. 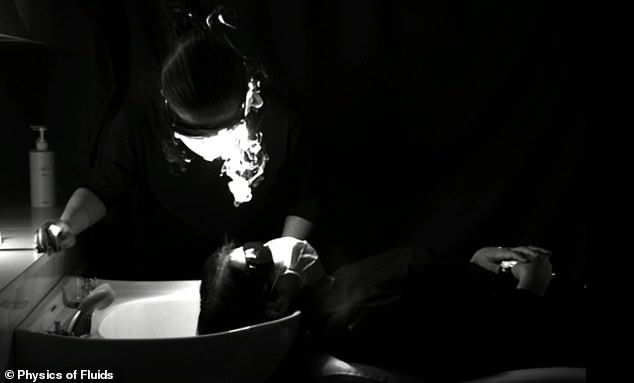 In the study, published today in Physics of Fluids, participants wore a mask, no mask, and a visor while standing, sitting, facing down, or lying face up. They were instructed to repeatedly utter ‘onegaishimasu,’ a typical Japanese greeting in a business setting after inhaling the vapor. Pictured, the flow of air from the ‘hairdresser’ falls onto the customer 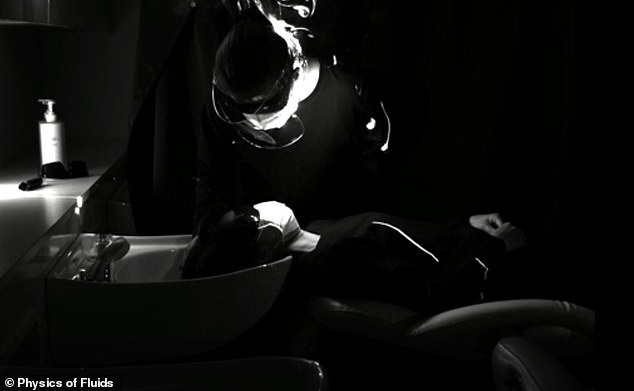 The study found exhaled air from a person who is not wearing a mask moves downward due to gravity, and would fall on a patient or customer.

However, when a mask is worn while standing or sitting, the cloud of exhaled particles tends to attach to that person’s body and flows upwards.

But if the person is wearing a mask and leaning over, the aerosol cloud tends to detach from that person’s body and fall onto the client below.

The investigators also found face shields can prevent any aerosols that leak from around the technician’s mask from traveling down to the customer.

‘The face shield promoted the rise of the exhaled breath,’ said Ishii.

‘Hence, it is more effective to wear both a mask and a face shield when providing services to customers.’

A shocking video reveals the risks people are taking by having dinner with someone who lives in another household.

It shows how in a typical British dining room coronavirus particles expelled from someone’s mouth circulate and infect other people.

Experts from Hexagon Manufacturing Intelligence in Japan built a model to show the level of risk that an asymptomatic person poses to other people at a table.

The engineers hope their simulation can help individuals and families evaluate the risk of mingling over the festive period.

The researchers worked on room dimensions of 4.9m x 3.7m (16ft x 12ft) and ran two versions of their simulation, with the room closed off with no ventilation and another with two windows and a door open, each for ten minutes.

In the videos the researchers map the particles expelled from a person’s mouth during regular breathing and talking.

This causes a relatively pedestrian spread of particles compared to coughing or sneezing.

‘Hexagon engineers in Japan created the simulation as part of a public education effort, to help authorities and the general public understand how to best protect themselves and each other from COVID-19 transmission,’ Keith Perrin, Industry Director for Hexagon told MailOnline.

‘Being Japanese, they were used to social distancing and wearing PPE when sick, so were intrigued about other attitudes.’

Heat from radiators, food and people sat around a dinner table forces particles towards the ceiling but if there is insufficient ventilation they have nowhere to escape to and are forced to return down and swirl around the room.

However, if there is ample ventilation from open windows, the particles are almost immediately sucked out and away from other people.

'Schools WILL reopen on March 8': No10 refuses to delay restart despite Brazilian Covid fears